Is everyone at Tale Worlds Ok?

Wellenbrecher said:
They're really pushing hard on the Gülen narrative aren't they?
Click to expand...

No kidding. It's so reminiscent of the Nazi rise to absolute power it's not even funny. Just replace Gülen with Communists. They even one-upped them (hypothetically of course - it could also be real) by staging an actual coup attempt, rather than claiming one was about to happen as evidenced by an arson attack.

I, too, find it atrociously ironic that Erdogan asked the people to resist using mass messaging that he has been so fond of blocking and banning.

Fewer than I expected, to be honest. Still, a big shame.

Lux said:
I, too, find it atrociously ironic that Erdogan asked the people to resist using mass messaging that he has been so fond of blocking and banning.
Click to expand...

It's similar to how the US and the UK were so adamant about Saddam's WMDs. Of course they knew he had them, or should have them, they* sold them to him in the first place

So, the coup failed?

Wellenbrecher said:
They're really pushing hard on the Gülen narrative aren't they?
Click to expand...

Yes true. The country's in an incredible mood today, "we won't be satisfied until every single Gulenist is hanged". I think for a few days it's more prudent to not speak too much on this issue.

Erdogan will become really paranoid now. I can really see this country spiraling down into an authocracy. I wish you all the best.

Just now from the live coverage: Anti-government group have taken over the frigate and taken the head of the Turkish fleet hostage at Turkey's Golcuk naval base.

Can't confirm, but apparently a Turkish blackhawk helicopter has landed in Greece with eight soldiers requesting for asylum.
Greece has detained the soldiers and Turkey wants them back.

A Turkish military helicopter has landed in northern Greece where its crew has requested political asylum.

Local reports suggest the crew are part of the faction of the Turkish military that attempted to overthrow President Recep Tayyip Erdogan’s government in a coup on Friday night.

Greece’s defence ministry has confirmed seven military personnel and one civilian landed in a Blackhawk military helicopter in Alexandroupoli and requested asylum.

Upon arrival the eight crew members were arrested for illegal entry to the country.

Mevlut Cavusoglu, the Turkish foreign minister, has demanded their return.

They should have rather landed in Cyprus.

This sounds like a parallel "coup". If the able judicial organs are treated in such a way, I can only assume it's an attempt of a group of people to seize more power within the state.

To be more precise, government sacked 5 from HSYK(High Council of Judges and Prosecutors) this morning and afterwards HSYK sacked 2745 judges and prosecuters.
A rather short history of coups in Turkey. There are some ultimatums and other failed coup attempts that could be added. 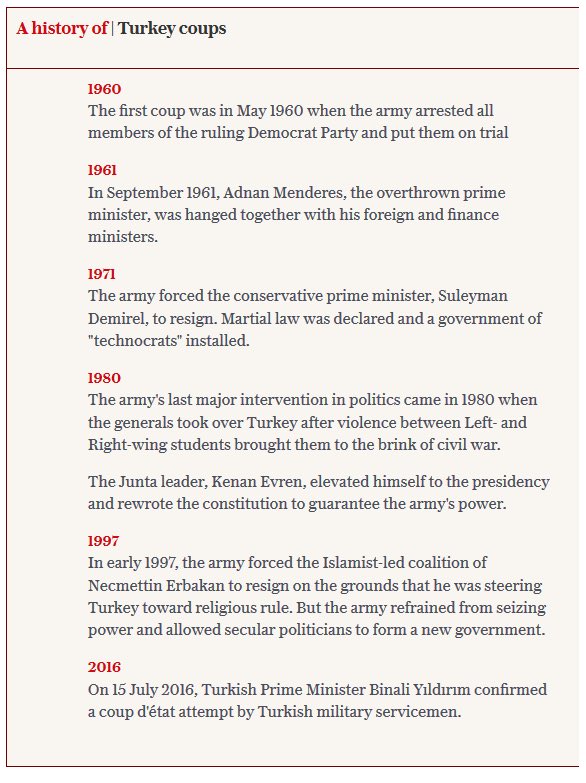 General Directorate of Security asks the citizens to report any social media propaganda accounts that support the coup to them, with screenshots and names. This is repeated by different people on live channels and twitter accounts
Click to expand...

The Turkish government has indirectly accused exiled Islamic cleric Fethullah Gulen of being behind the coup.

As we told you three hours ago, Prime Minister Binali Yildirim said any country that would "stand by" Mr Gulen "won't be a friend of Turkey and will be considered at war with Turkey".

Mr Gulen lives in self-imposed exile in the United States.
Click to expand...

Not even Erdogan is dumb enough to declare war against the US.
This might be a good time for all the resident Turks to delete anything that might be considered as supporting the coup, though.

Lux said:
Not even Erdogan is dumb enough to declare war against the US.
Click to expand...

Where does it say that the US stands by Gulen?

If they grant him safehaven, it could be interpreted as such.

Maybe we could do Operation Turkey Freedom a little better than Iraqi Freedom... no, we probably wouldn't. Sorry.
You must log in or register to reply here.