I read the whole serie, me too I confess that I barely understood the outline (I'm not even talking about the philosophical, ecological and other more "adult" themes), I was too young for that, not enough background to understand. But I was greatly impressed it was so good nevertheless. Maybe it's time to read it again, now that I'm old and cynical.

BTW, I think A Song Of Ice And Fire was "inspired" by Dune (a little too much for my taste

White walkers are spice eaters? I should make a video of me creating a scene that would last for months and be in 25 episodes ? This town looks pretty cool!

fladin said:
BTW, I think A Song Of Ice And Fire was "inspired" by Dune (a little too much for my taste

Well, in an interview, Martin listed Dune among his inspirations, but the primary inspiration (you can even say the SoIaF is just a fantasy retelling of it) are the books by Maurice Druon. They are pretty good, political thriler in the 14th century France and a bit in England. I own and have read the first 2 books, but sadly I cannot find the other books anywhere near my place.

Very interesting, I haven't read any of Martin's books, I thought he took inspiration mainly from the War of the Roses, I only saw the tv show, the similarities that struck me while watching that serie:

Two feudal rival houses : starks vs lannisters => atreides vs harkonnen
A charismatic leader and father led to a trap and betrayed early in the story : Ned Stark => Leto Atreides
Some secret societies here and there : Priestess of the Lord of Light => Bene Gesserit and Faceless Men => Bene Tleilax (it's this point, with that "Face Dancer" thing, which confirmed to me the relation between the two universes).
And of course Bran Stark is literally Paul Muad'dib !
I'm sure there's more complete topics about those similitudes, but these are my own conclusions based on the tv serie and not the books.

You're definitely not wrong.

Sorry for this digression, but this case got stuck through my throat for a long time and it should come out ...

Soon 100 followers on your youtube! I'll have to take a look deeper at the Blender part

All I did was mess up Al Mansur's (?) work a little bit, but it's for a good cause


Edit 2 : and finally the siege scene


Edit 3 : this list is starting to get long and boring

Hello Fladin. I just wanted to say that trasferring your custom armors to the mod of my choice is pretty difficult to me.

I don't have much experience with BFR and the transferred armors and helmets end up being white or misplaced in certain body parts when I see them in game.

Even when I copy and paste the textures and shaders to my new resource file through bfr (not to mention that I paste the armour's textures in the textures file) and It still ends up like this and I don't know how to properly positiom the helmets or even make the appear in my character.

Hello Caliban, I resume the development of Tohlobaria this Saturday, if the Module System of the target mod is open source I can help you (if possible) to add the items of your choice in the said mod. I promise nothing but I will do my best to help ...

Unfortunately I don't know how to control the module system or the p.y files.

I only know how to (moderately) use OpenBFR and Morgh's editor.

Btw, I have discovered a solution to problem one and now items don't (always) glow white everytime I put them in the game.

My only problem now is the placements of the helmets. The problem is just that they are not positioned normally on the head. Either they're floating up in the sky or they're floating in front of me several meters away..

Aaah, that's easy (I think) : Add the itp_attach_armature flag to the helmet, or maybe "force attach armature" or something like that in Morgh's editor.

Thank you so much, Fladin. It finally worked.

However, there seems to be another problem. The helmets with mail coifs seem to not appear in the game.

It actually causes a graphical bug when I implement it.

My troops whom I equipped this helmet with are now bald XD.

I don't know what causes the problem, to be honest.

I've put everything where it should fit in. Maybe there's a different shader or texture for coifs in the mod I want to transfer items to.

Bald troops syndrome, or invisible items, is usually caused by mismatch in meches naming.
You may need to check if the "mesh name" of your item, in morgh's editor, matches the name of the mech in the brf ...

I didn't change and update the mesh name.

Now they show up properly.

Thank you very much, Fladin.

I hope you finish your mod.

Thank you and good luck

Hey, Fladin. I have been playing around with your items and BFR.

And I have really enjoyed myself creating combinations.

This is one of them.

Very nice, welcome to the club

I have now a problem with transferring one of your heraldic shields to another mod.

However, the shield appears improperly in the game. It's like various textures mashed together with the heraldic part being a small part of it. 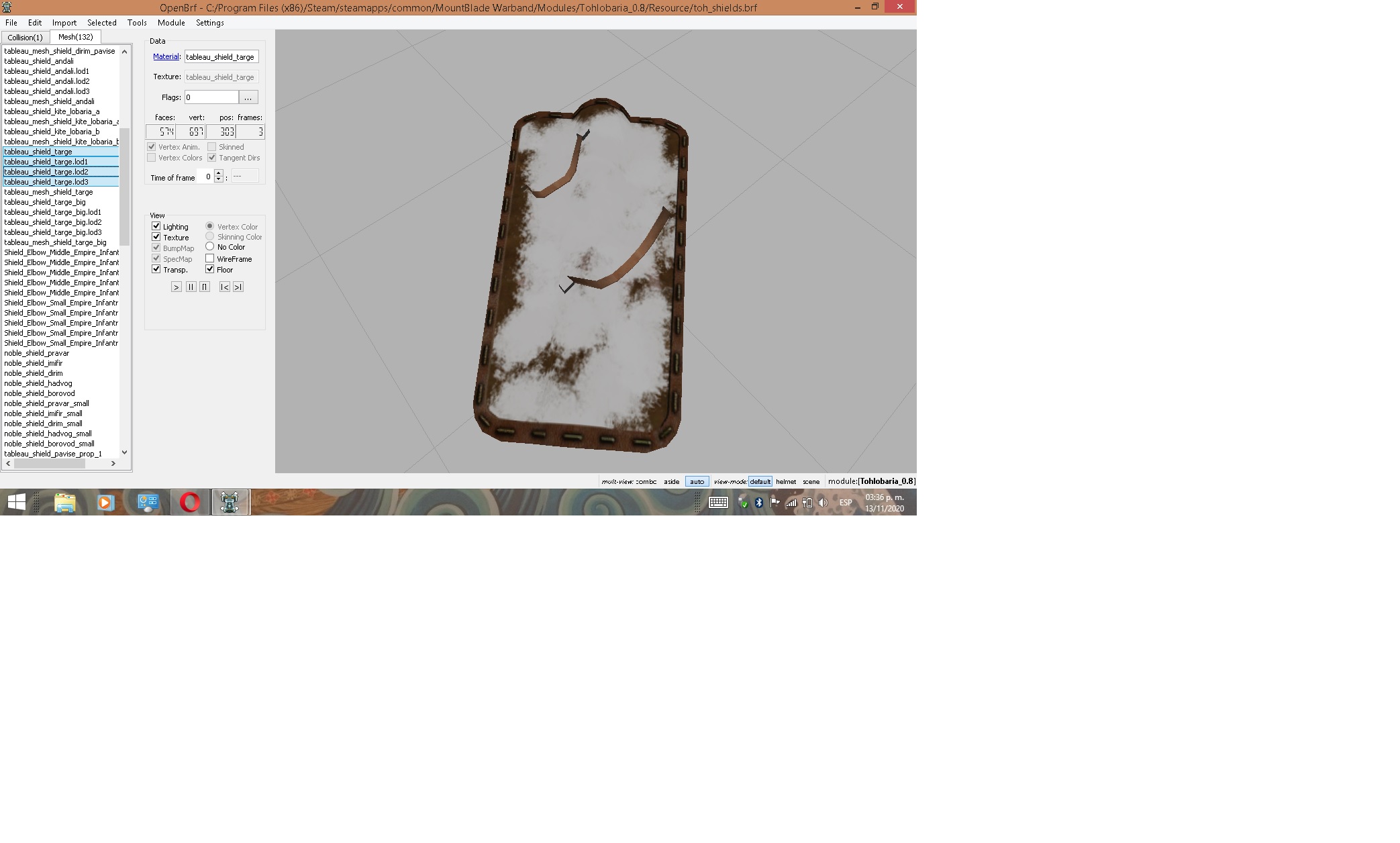