The swing arc for the polearm hitting animations differs quite a lot when executed mounted (excessively obtuse arc) and when executed on foot (more natural acute).
When swinging a polearm on horseback the model twists excessively obtaining an ugly texture squeeze and an unrealistic anatomical pose).

Great presentation and obviously i agree that your suggestion looks WAY better for immersion.
I only wondet how it would impact the longer weapons' damage calculations and if it can be remedied by simple tweaking of the weapon stats...

Great presentation and obviously i agree that your suggestion looks WAY better for immersion.
I only wondet how it would impact the longer weapons' damage calculations and if it can be remedied by simple tweaking of the weapon stats...
Click to expand...

Undoubtedly, by reducing the arc, the accumulated energy is lower and the value of the blow at its peak would be weaker. However, these weapons already have a high enough damage when they are swinging on foot, imagine the accumulated force with a speed bonus (horse).

Personally, what interests me with these restrictions of the swing arcs is to place this type of weapon in its context.


A left to left swing is more practical if the arc is reversed (polo movement - back to front hockey style swing) to ground level and not so horizontal (horizontality works on foot). Keeping is swing pose to the left, if we wanted to hit right the current animation is the ideal (swing stroke up and down and front to back). The hitting set with pose, both left and right should draw an S shape. The hits on the same side, the weapon should rotate (a spin similar to the one originated when changing the mode of a javelin by means of X key).

Great quality content as always.
A good example and explanation of how it works in RDR2, it could serve as reference if someone looks into this.

Body rotation on horseback. As you can see, the movement and control of the horse is pretty much independent from the movement the rider performs on while riding.

Rotation or twist of the body is the results of the sum of rotation of each vertebrae, and not in a single point.

Seated upper body rotation. With the lower body in 100% fixed position you don't get as much rotation.

This position is similar to horse riding, afaik.

Good stuff!
Therein lies one of Bannerlord's dilemmas. Why does the manoeuvre arc when operating a bow have realistic values and when hitting with a two-handed stick does not?

The stance for shooting a bow with the right hand drawn to an object from behind is totally plausible and certainly limited to around 180º (appearance of red crosshair). With this same stance, the red mark on the crosshair appears when we go beyond the 15º angle to the right because it would be totally impossible to shoot in this position (we would have to change the hand of the bow ----> assuming a new shooting and reloading animation)

When I first saw this gif I raised an eyebrow. The rotation of the hip here exceeds the limits of human biomechanics and at the same time seriously compromises the textures of the 3d model itself.

​
In my eyes the 1H sword hitting animations, 1H spears and 2H spears on horseback are the best achieved... the rest are honestly debatable (2H polearms and swords).

A huge piece that is missing from mounted combat, is the agent does not lean to the side of the horse they are swinging from,
This would allow for a much greater range of vertical tilt for the attacks, making engaging the infantry with 1 handed weapons much more viable.

- Which is i assume why the horses are scaled down and are maybe 60%-70% the size of the real-life counterparts.

- AKA Being tall on horse = impossible for AI and players to engage infantry because the sword swing would go over their heads due to poor mounted attack animations.

- Also probably due to lance / spear problem. Since all of the agents hold the spears/lances basically in the middle when stabbing and even couching, the fully extended range of the tip bareley goes past the horses nose!

- If the horse models were true to size, many of the couch lances in game would not even stick past the horses nose while couching!!!

Example of leaning while slashing from AC1: 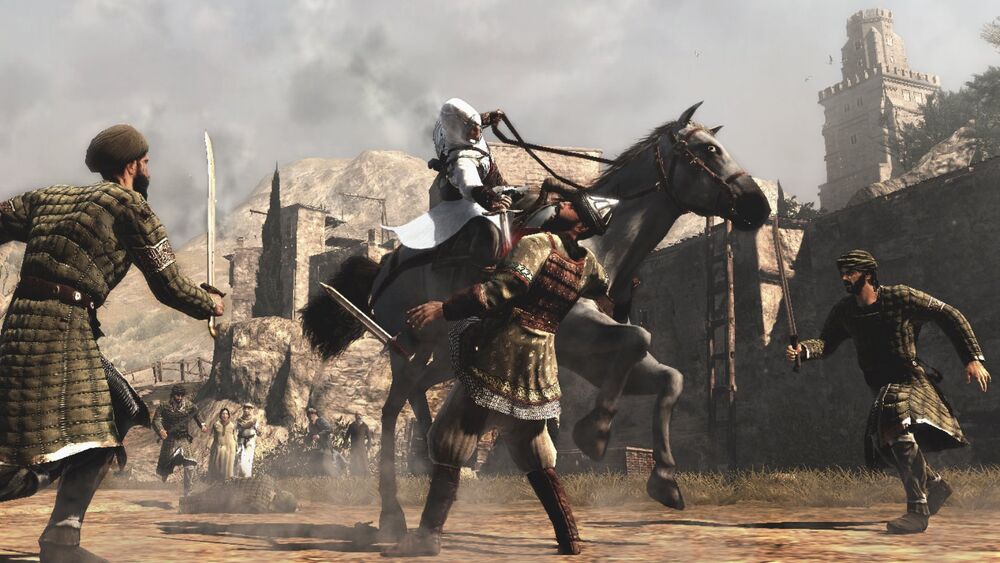 I wonder if the developers could make an inverted (backwards) animation for the back-to-front/wind-up sideways swing by modifying an existing one, replacing the latter with the former? see #1