@MostBlunted is your "Say the line" meme ready?

Spinozart1 said:
@MostBlunted is your "Say the line" meme ready?
Click to expand...

Callum himself is doing the final test right now, TWs headquarter is ready to push the release button.

Goyyyio said:
@Duh_TaleWorlds marriage is kinda ridiculous, in every sense
Click to expand...

That's why you get a prenup.


Duhk_Tails said:
@Duh_TaleWorlds Please read and rate my creativity above.
Click to expand...

Duh_TaleWorlds said:
That's why you get a prenup.

iam seriously about to **** myself 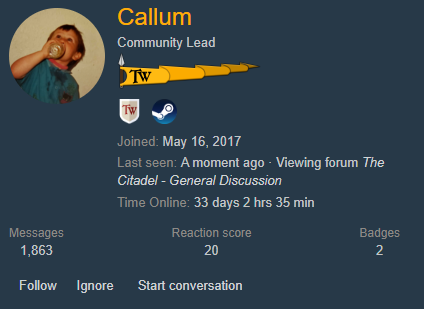 Duh_TaleWorlds said:
That's why you get a prenup.

Duh_TaleWorlds said:
That's why you get a prenup.
Click to expand...

Nice joke, but I wished you guys actually took a look at the marriage and persuasion system, it really makes it feel everything bland .

Just went out a playthrough in Warband and average, not overly grindy playthroughs I get a marriage by the end of early game/mid game (when you become a lord and get your first villages/castle), because at that time I got enough relations with the lady's lord I wanted to marry, I had to actually get renown and the lord's trust, otherwise the lady would be promised to another Lord (at least that how it was in PoP). If you check the video, or any BL playthrough, you can marry instantly in the game, being a low level Merc and being allowed into a marriage seems kinda ridiculous, why would any Clan Leader allow that without a good reason.

And talking about things happening instantly: in one chat a lady decides she wants to marry you (or decides not to speak to you for the rest of your life, this is more plausible for the average redditor/forumite/4chsnner that plays this game but gameplay wise it's dumb), and then you have 1 chat with the clan leader, pay money (feels like paying for a slave) and out of nowhere: you're married (even if you're in the middle of nowhere). What happened with paying for a weddings preparations, what happened to the big feast and a tournament where almost every lord assisted? What happened with having to wait until the wedding actually happened? Marriage used to feel like an event and now it's just a boring notification on the side.
I hope you read this @Duh_TaleWorlds , I think a lot of players miss these immersion features you guys choose not to add I really don't get why these things get overlooked by the team
Last edited: Jun 9, 2022

Bjorn The Upset said:
Marriage, except the part of persuasion, is just a trade transaction.
Click to expand...

You don't even need to persuade if the one you are trying to marry is first one to be married in his/her clan, e.g. Silvind against her sister Odofled. If you wanna marry Silvind just go to Calatild and do the trade. However, if your goal is Odofled in this example, then you need to persuade her because normally she should be married after Silvind.

I updated the game to 1.7.2, but for some reason the launcher doesn't open? I've tried everything, but nothing working.

Danny5 said:
I updated the game to 1.7.2, but for some reason the launcher doesn't open? I've tried everything, but nothing working.
Click to expand...

Trying everything included verifying integrity of game files? If not, I recommend doing that. (if you are on steam, hopefully)

Danny5 said:
I updated the game to 1.7.2, but for some reason the launcher doesn't open? I've tried everything, but nothing working.
Click to expand...

in my case when i tried to launch the game it crashes on me. have you expereinced this as well?

hsngrms said:
Trying everything included verifying integrity of game files? If not, I recommend doing that. (if you are on steam, hopefully)
Click to expand...

Yea I'm on steam and I tried verifying as well

human72 said:
in my case when i tried to launch the game it crashes on me. have you expereinced this as well?
Click to expand...

Yea, the launcher doesn't show up
You must log in or register to reply here.

Today at 6:42 AM
MostBlunted