Hello,
I don't know if I am the ony one having this bug, but AI pikemen are not forming, they charge disorganized like Eleutheroi.

I created some new banners to replace the old ones:

They're minimalistic and there's a bit of repetition/placeholders until I figure out some better replacements but for the time being it's better than what was included in previous versions.
I've also updated the starting option code, mostly balancing stats and cleaning up the messy code into something easier to tweak. Most significant changes were made to the warrior start, there's now more options and you receive some troops to get started as it was indicated in the menu but I had forgotten to include.

Ah, pretty good. As for minimalism, if we can be honest, people in the Ancient times didn't actually used heraldry, in the sense the base game uses it. So, under those circumstances, I think less 'fluff' is more fitting for an ancient setting.

Hi. New beta is really fun and the map is great, apart from the mountainous battles in greece. I have 2 questions.
1. what are your plans for taking the mod over to bannerlord? or do you even intend to?
2. have you considered making a discord? why/why not?

Sorry if these questions have already been answered. Thanks for your effort into the mod.

Hi, that bug will be fixed, don't worry
1 - Back when the game was announced we wanted to port the mod over but now it's very unlikely.
2 - We have one for the team but it's not very active, I'm not sure it would be useful to set up a public one since 2.6 is probably the last update the mod will receive.

If you happen to have parties getting stuck traveling between Lamia and Larissa Kremaste here's a map fix (doesn't break saves):
Google Drive Download

The fix will be included in the next patch. It is also automatically applied if you are subscribed on the Steam Workshop.

- Fixed terrain generation resulting in ridiculous battle scenes in mountainous regions
- Overhaul of the recruitment system script, now villages won't run out of troops all at the same time and reduced the performance impact of the script
- Fixed missing troops in custom battles
- Updated the barracks to display only troops that can be upgraded
- Added several troops to be upgraded through the barracks system
- Added 7 more companions
- Added more ransom brokers to taverns
- Replaced all the banners
- Updated starting options and tweaked early game progression (Warriors start with troops as advertised and bandit parties have less troops at the start)
- Reduced garrison and lord party sizes
- Fixed player kingdom using the wrong troops for their patrols, caravans, etc...
- Fixed some village assignments
- Fixed prisons not having an exit
- Fixed several spots on the map where parties got stuck
- Updated some npc families
Last edited: Feb 3, 2020

Links updated on the post above, due to a forum bug I can't edit the other threads yet but hardly anyone uses this board so it shouldn't be much of an issue.
Last edited: Feb 3, 2020

Yeah, I removed the trigger from the taverns by accident when trying to fix a dialog loop with the tavern keeper when assassins ambush you.

just found out the macedonian veteran companion. i can't remember
his name, but he has a superbe story to tell. certainly one of the
most interesting i've seen in all mbw mods! great update,
thanks!

Thanks, but speaking of companions another oversight from me and I left some of them out of the update or bugged so here's a hotfix for that issue:
Hotfix (Moddb)
Save compatible or at least doesn't break saves.

Quesiton - many of the models in this mod are very high quality. I haven’t seen 3D renders but presumably they’d be high quality enough to be recylcable for a bannerord mod

I have no idea if they fit the Bannerlord skeleton and there might be a lot of work involved to porting the models over. You need to make sure they fit the characters in Bannerlord, that there is a variant for female characters (or if you can get away with not having one), the textures need to be converted to the PBR system that Bannerlord uses, etc...

I've been learning blender the past week in the hopes that someone or myself begin work on a mod set in the Hellenistic period. If anyone wants to see what I've been working on, send me a message.

where can I find all the chalcidian helmets models worn by greeks and others nicely previewd like the others ones. I cant find them here or on moddb. Im not talking about the italic variations of them. They are also made by rgcotl?

also are there other variations of the thraco-attic helmet others than the ones previeed by Rgcotl some years ago? or has this been modified a bit ?

Orphydian said:
where can I find all the chalcidian helmets models worn by greeks and others nicely previewd like the others ones. I cant find them here or on moddb. Im not talking about the italic variations of them. They are also made by rgcotl?

also are there other variations of the thraco-attic helmet others than the ones previeed by Rgcotl some years ago? or has this been modified a bit ? 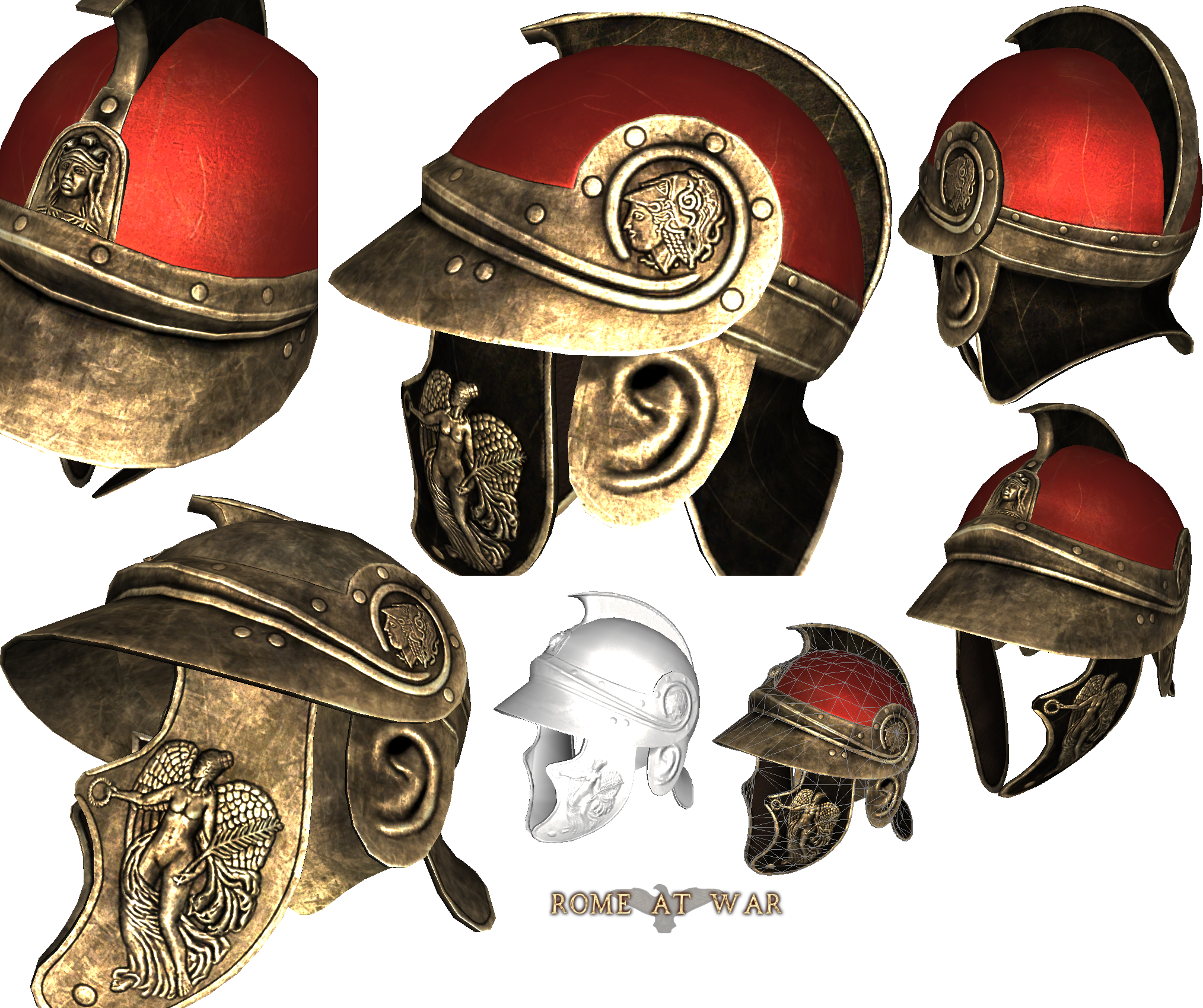 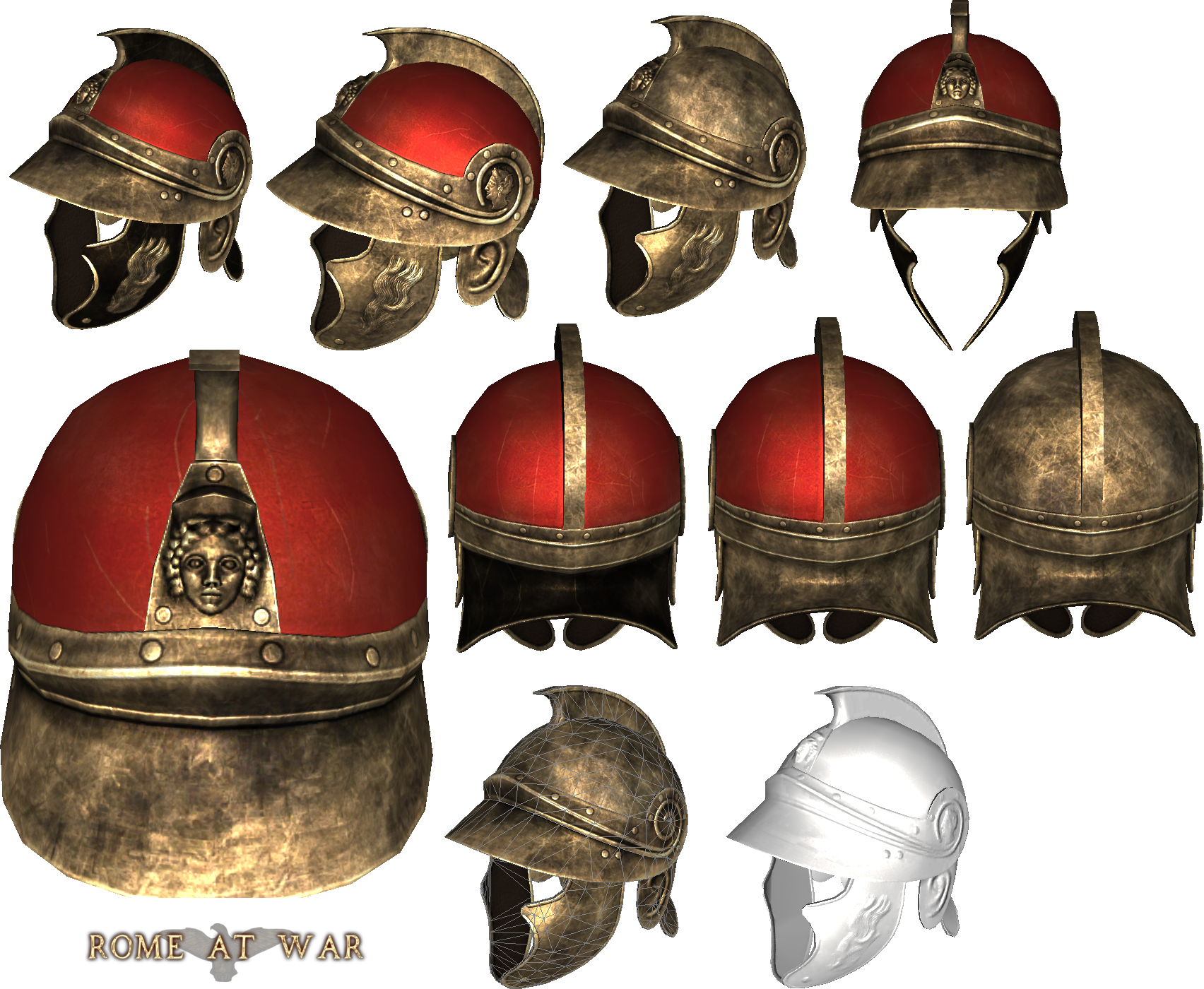 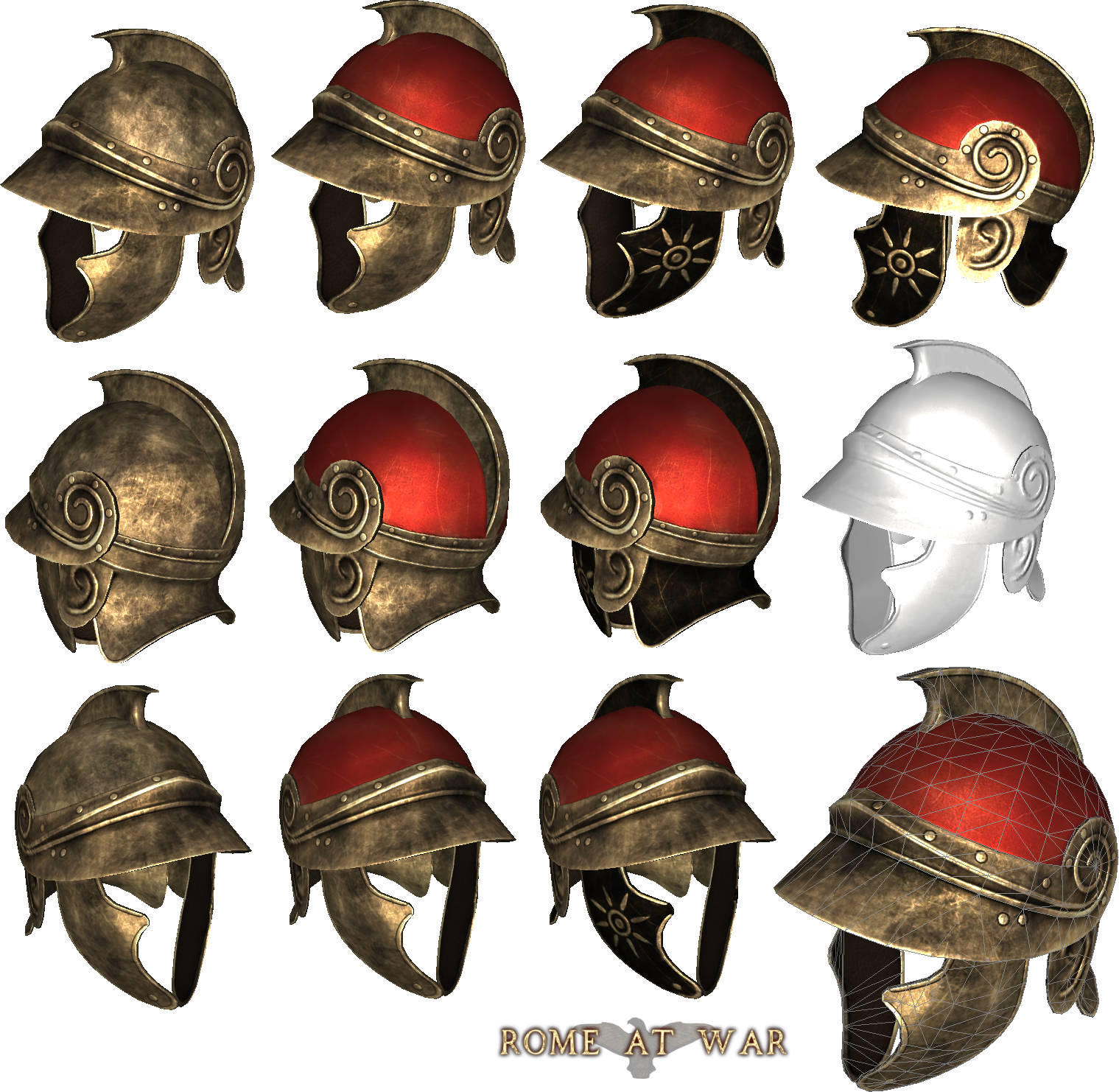 The Greek Chalcidian was created before the Moddb page or even before the mod so it didn't get a preview.

can you provide some closeups of it from multiple angles pls! I think its on one the best chalcidian depiction Ive seen being modeled. Im gathering some nice references to learn to model some by myself.
Are there other variants of chalcidian in this mod other than the italic ones and this one (crested or not)? Not familiar with this mod or mount and blade in general, but is it focus on Italian Peninsula ? otherwise how come you guys made a good number of chalcidian versions for the italics and not more for the greeks and thracians ? there are some very cool and elegant variation of it used by thgem and it would be awesome if you guys will include and diversify even more. Pieces like these Im talking:

I could say the same for the Thraco-attic. It could use a couple of more variants (not talking about details and textures )

Do you guys plan to include this very popular hellenistic helmet variant of the Thraco-Attic ? (conventionally named Ascalon or/and Sidon type).

Folder
1drv.ms
The Russian guys from Natus ob Imperium mod (first image) pretty nailed its design so I think it should be the prime refference

For the romans, I find there are lacking some helmets that could be used by consuls and centurions, like this sweet variant of roman-boeotian with cheekpieces.

Maybe should I put this in a suggestion thread
Last edited: Jun 2, 2020

Do you meant this Chalcidian?

If so, it's actually modeled after the Alexander movie props: 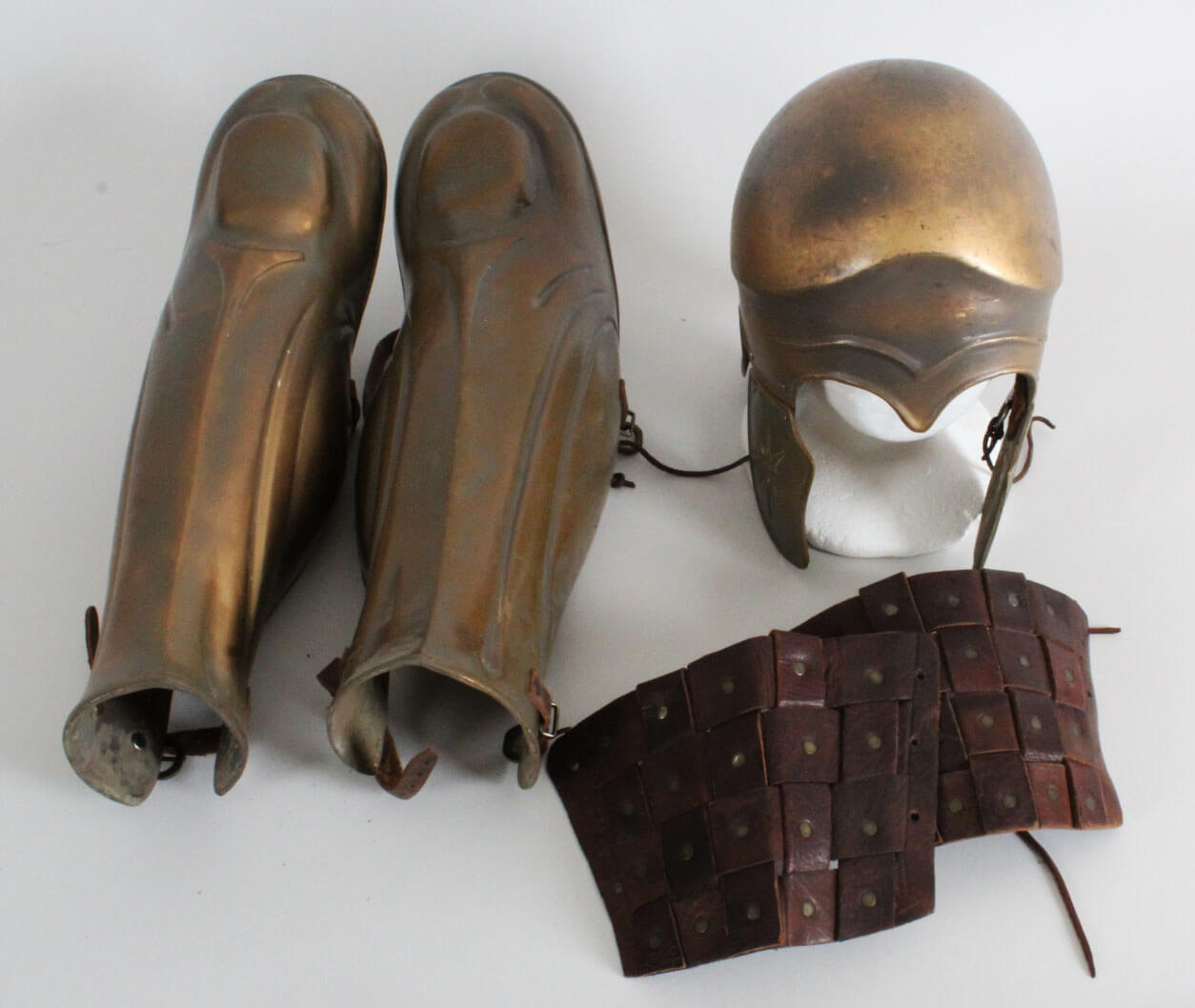 The helmet was made before we started taking a more serious direction with authenticity, the actual movie prop is made after real pieces but sometimes the proportions are a bit goofy (they tend to make a "one size fits all" for these).
We felt like we had enough helmets for the Greeks so we focused on the Italian factions more, we only have one modeller so there's only so much he can do, sometimes we're lucky to have someone donate a few models they made but it's rare.

I wanted additional attachments (feathers and crests) for the Thraco-Attic but alas they haven't been made. The Sidon and Ascalon types come after the mod's timeframe (300 B.C.) so we didn't see fit to add them.

We have that kind of Boeotian helmet already: 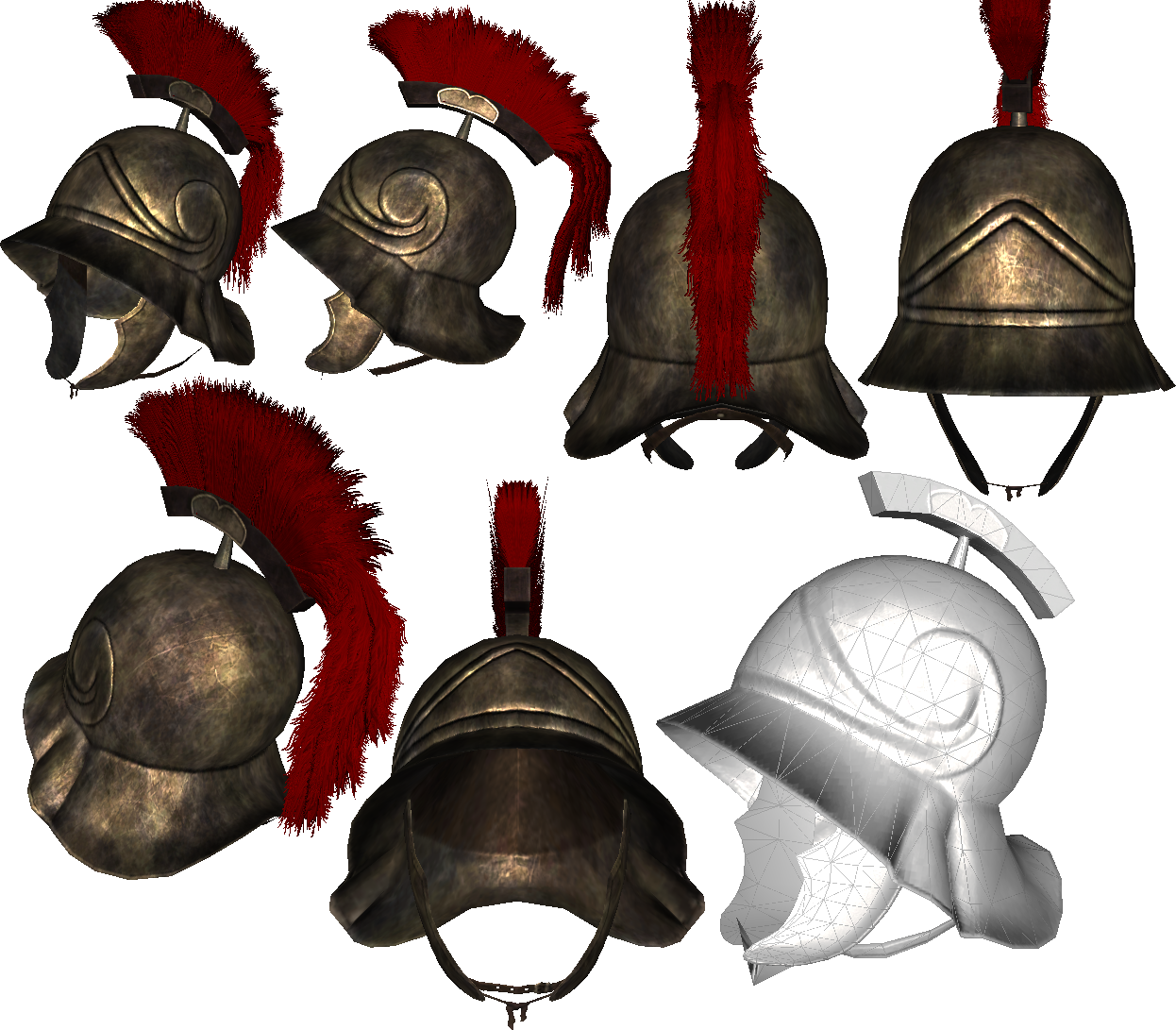 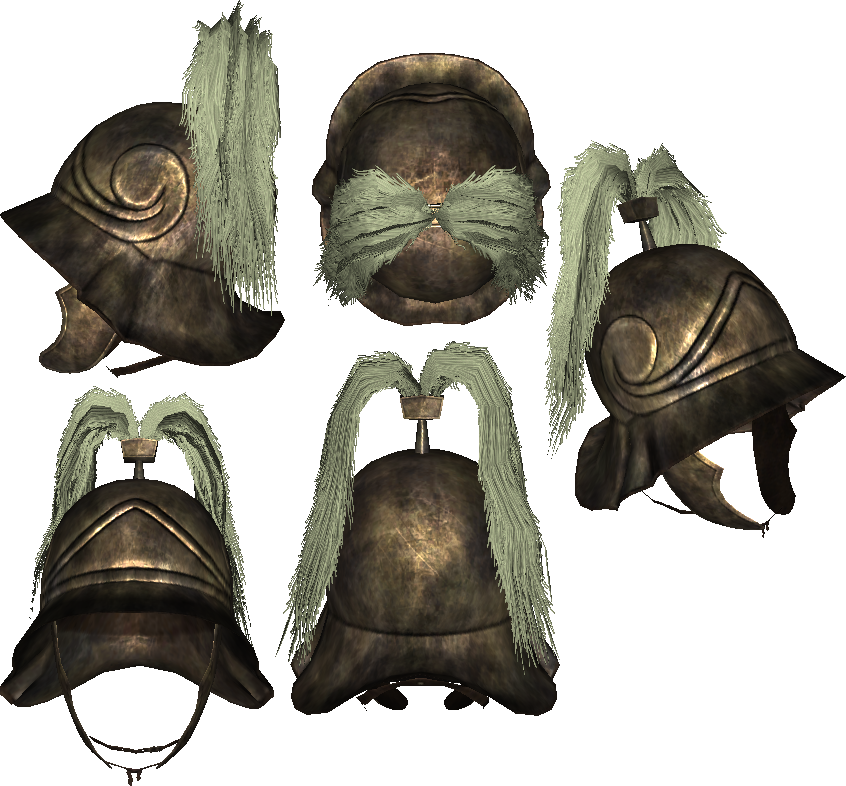 Usually for Centurions, coupled with Apulo-Corinthian helmets and Samno-attic helmets, the later used for Tribunes: 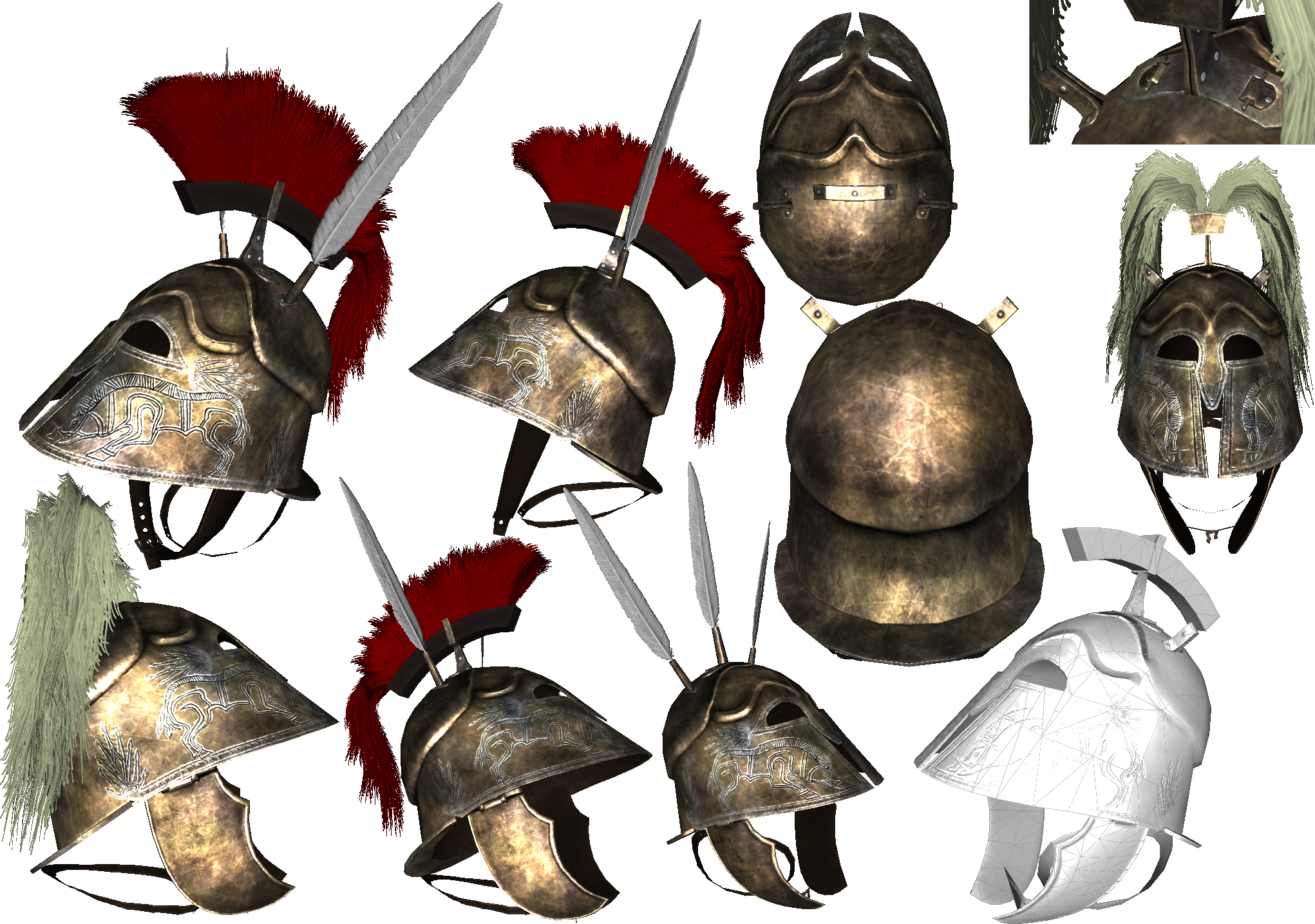 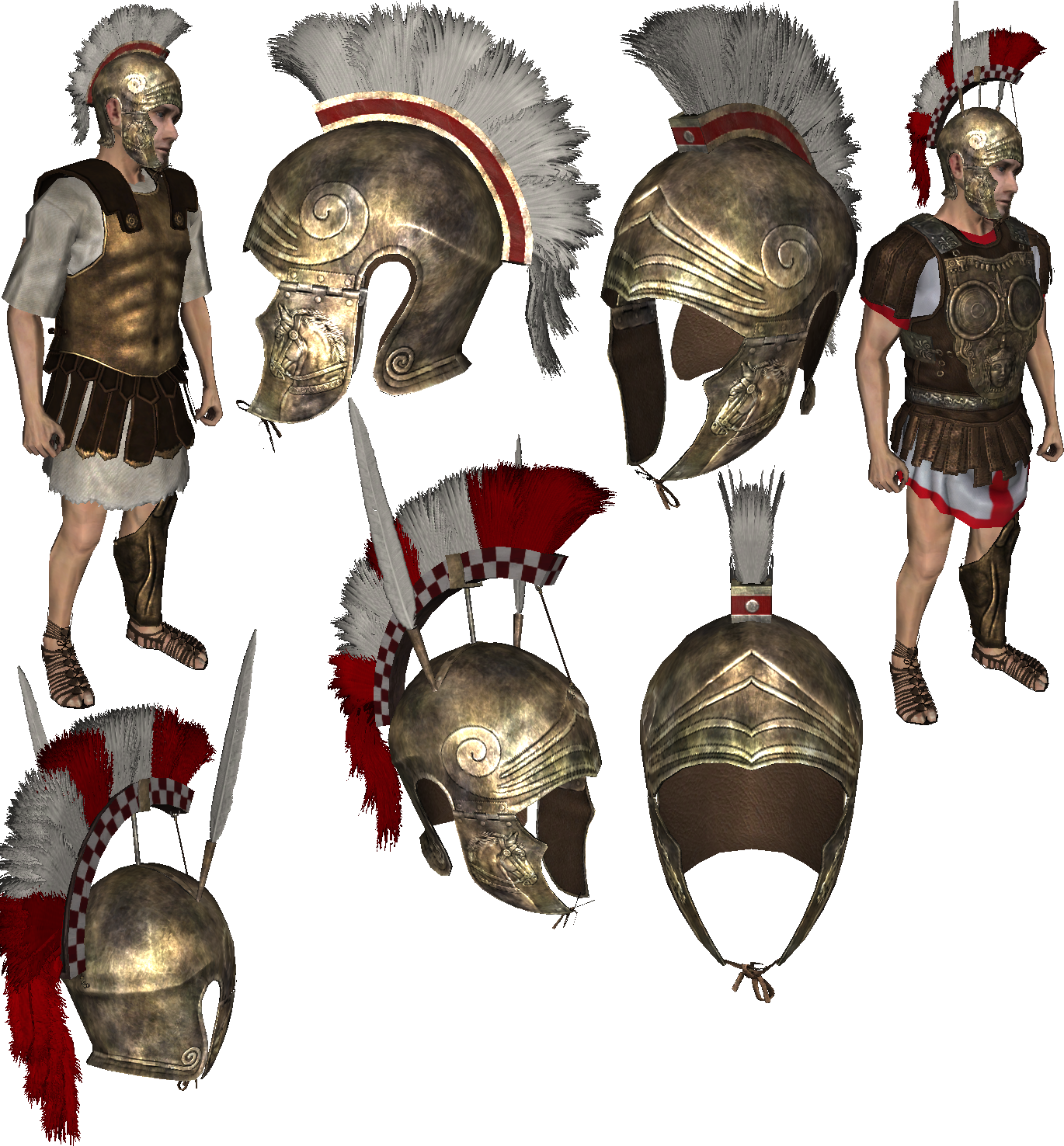 If you like helmets this thesis is pretty good:
The bronze Italian helmet
There's also "Ancient Greek Helmets" by Randall Hixenbaugh with tonnes of examples and illustrations with a price tag to match, with some luck it can be found in some libraries.
You must log in or register to reply here.