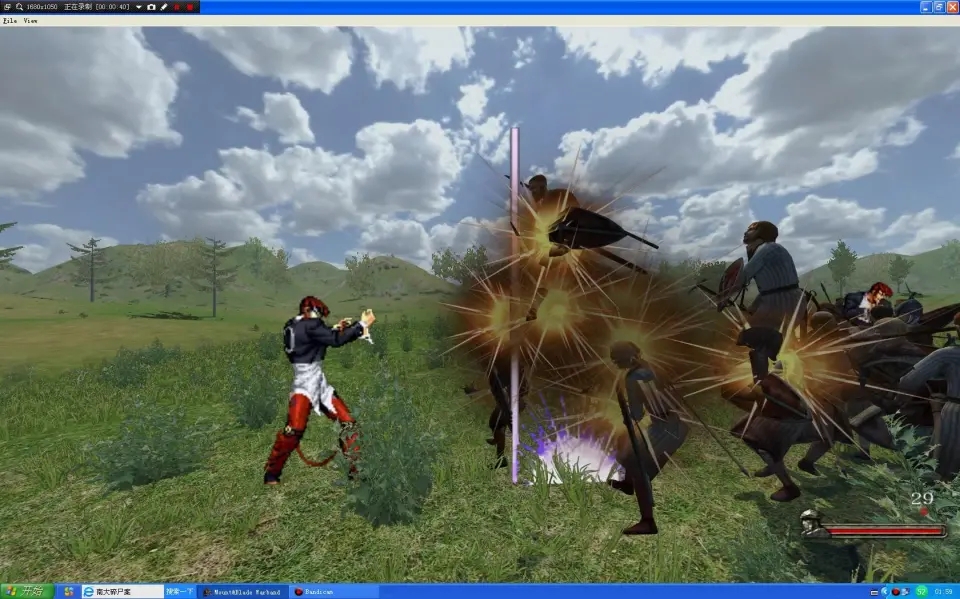 The main update direction is to make 2d things and 3d things combined well with each other.

The main hero is still from kof and 2d. The country will become some culture from some classic 2d games such as DNF.and i will also add some 2d effect in this mod such as the 2d dynamic title for roles ， 2d memes as special weapon such as "silence wench" ， funny cartoon start in settings menu and is planning to make 2d new pic talking system.

I know few one can understand my settings and why i do this mod since the early access demo has released for some time.I even don't know i will continue for this for how long time next.But i want to show your a different game design with a mod form of mountblade and show how mountblade can even become what things.

NEXT There is Mountblade KOF Mod Recent Update info from v0.55-v0.65.

2. The map in the lower right corner will be changed to the King of Fighter dynamic map (it is expected that different dynamic maps will have different attributes in the future, and there will be a corresponding full-screen 2D scene when releasing the magic move).

3. Vigia has been changed to the kingdom of ghosts and animals. 2D character Ma Bao has been added to the upgrade tree.

5. Adjusted the frequency of battlefield reinforcements and other adjustments

6. Add up and down left and right arrow keys to control the rotation of the character, which can be controlled by adjusting the mouse itself, but after repeated movement, the steering may appear rigid, so this addition is mainly to assist the steering and buffer the stiffness caused by frequent shaking of the mouse

1, in the country of the firm change for DNF, temporarily keep original units, first in other branches of the original normal arms upgrade space to rise DNF 2 d creature, a total is divided into eight categories, each categories for the same units, but have different random form, at present there are six randomly to the ghost biological form, scarecrow, puppets, linyi, elder brother clothFighter and other monsters each one, stone man three, data entry more trouble, more images have been processed.

2. Handle the problem that the opening animation of the camping interface is blocked by the data panel.

3. BU G Self-check: if you infiltrate into the city, you may find that you can't succeed even after the enemy is destroyed, because you need to kill all 2D animals in the city.

4. Plan to replace other nations with creatures and cultures from Legendary/Metal Slug/other well-known 2D / 2.5D games

2. You can also sign in to draw equipment when camping, only you can draw meme equipment.

1. Increase skills can use active items "two tigers love dance", the effect is the egg yolk through after the half screen in the middle area of the 2 d will directly into two tigers the yellow people love to dance, dancing on a range of cycle animation, every time the flash to the end of the cycle, will be a damage, until they die.Control + damage is a control + damage skill used to target 2D world characters

2. Delete the manbody model used to compare the supernumerary height of the characters.

1. Inventory skills are installed. From now on, the active skills of the eight items on the interface will correspond to the number keys 1 to 8 on the keypad, from bottom to top, from left to right, and from the lower left corner.The bottom four items are the original inventory of four weapon slots.

Weapon ②_ A Bite of Buddies: Play a dynamic close-up of a beer drinking emojis at the player's location, and the magic will be filled directly

Weapon ③_ Handsome Turn Back: Forces all the people in front of the screen to turn vertically while playing an emoticon.

Weapon drop: A small area of enemies in front of the screen will take upcasts and damage during the emojis.

3. Add a kind of "Panda Man Emoji" 2D people to citizens and villagers, and increase the probability of residents in urban and rural areas from 50% to 70%

1. The number of passers-by in towns and villages increased

3. A new skill in Eight Gods' Nunnery has slightly adjusted its body position

5. You can no longer use the skill if you are below 200. Press E to gather gas