Summary:
At the blacksmith in smithing mode, it is possible to craft your own desired Free Build weapon. For example you can select Two Handed Polearm, choose the components, then specialize the weapon in One Handed, Two Handed or Spear Brace. When you press the forge button, your weapon is shown to be crafted as desired, however if you choose Two Handed option, even tho the result shows that you successfully created it, you will get a One Handed weapon in your inventory and the crafting option switches from Two Handed to One Handed - meaning, that if you would like to batch create weapons, then you need to select Two Handed option again(even tho its not working at all, so this is a minor side bug)

Also 4th polarm element that can be selected has no effect on the stat, but I saw one polearm issue on the reported list, so Ig that was about this. If not then these are the 3 findings.

The issue is general for all weapon types where weapon specialization can be chosen, checked on two handed axes and swords as well.

How to Reproduce:
Check the video.

Have you used cheats and if so which:
Used mod: Keep own fief: https://www.nexusmods.com/mountandblade2bannerlord/mods/1132
shouldn't affect it tho

Hold on.
So, when I tried to do this, I did this because there are weapons with these type of settings I regularly use and tried to surpass its stats.
For example Cataphract Lance: 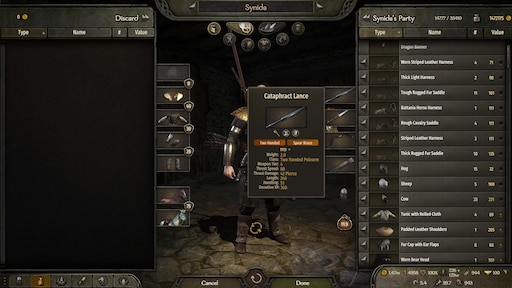 So when you try to replicate it, how do you do it? Well you go to the smithy, then free build, and you think that there are two options to do it. One is Pike. But you don't use pike, cuz you can't use it on horseback. The reason you want a lance in the first place is because it's very long, and you can kill the enemy horse units with it easily from horse back. So you choose Two Handed Polearm. You scroll down, and you see that the last one(Fine Steel Hewing Spear Head) is the one that is associated with the pre-build developer version - the Cataphract Lance. So you want to build exactly that. With the same exact traits, like if you take out the lance from your inventory then your character wont start mumbling with the shield, but takes away both the sword and the shield, and grabs the lance with both hands. So how do I craft that? Or in short; how do I craft any of the two handed weapons, where the weapon class says: Two Handed, instead of One Handed.
And you could say; yes, but maybe it's the design element that defines how you can use it, however if you check all of them there are like 2 in the two handed polearm category that be built as only two handed class, and the cataphract lance spear head is not among them. You can even zoom on the weapon while in the inventory view, and you can see that the one I described(Fine Steel Hewing Spear Head) is the exact same component the Cataphract Lance has.

In my inventory I have a bunch of other weapons as well, which has the same Two Handed classification, which you can find among the component blueprint lists and they are clearly listed as One Handed, Two Handed and Spear Brace classes. And I think you should be able to reproduce the exact same type of weapon the developer did with the exact same system. How can I do that?

Ok, I just saw one more thing that is related to this issue. So according to what you are saying, a weapon with the classification of Two Handed Polearm has 2 independent weapon stats - the Two Handed and the spear brace stats? And the weapon with One Handed Polearm classification has 3 or even 4? So why can't I compare then the Cataphract Lance with the Simple Short Spear then? Cuz each one of them has multiple stats right? The lance is by default two handed, the short spear isn't, but does have a two handed stat, yet the comparison view doesn't pop up. Shouldn't be like a option that I would like to compare their two handed stats? Like if I hover the cursor over the equipped weapon I can select which stats I would like to see. Then what about the one I would like to compare. I can see there is like a gap, 2-3 px between the stat box and the weapon in the inventory so I can't pull the mouse over the stats page.
Cuz that would be cool if I could just pull it there, select the Two Handed option, it shows the weapon's two handed stats and on top of that brings up the comparison window, where it shows the equipped weapon's stat for the exact same usage option.