Since it's been a bit over a year since EA release, and TW still refuses to tell us the scope of their multiplayer plans (let alone give us a roadmap for it), I figured I'd use the announcements and patches made so far to estimate how much longer particular features will take. I'll be using the "Statement regarding plans for MP" posts as well as several posts made by TW employees to calculate on average how long it's taking them to actually deliver particular features they discuss (not counting beta versions).

Category two: "in the development pipeline" / "being worked on"

Special shoutout to Duel mode being internally available in February 2020: 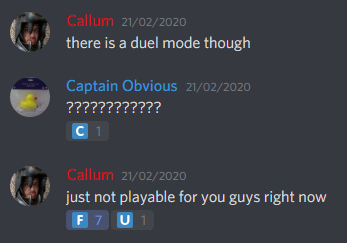 This is by no means an exhaustive list, so if you know of more promised features, please let me know. This list contains what I've managed to find in an hour or two, and goes to show how absurdly little TW has shared regarding what is actually in store for multiplayer. Spectator, voice chat, duel and battle, and ranked matchmaking are just about the only major features that have been shared at all over the past 2 years.

If anyone was wondering why I was certain dedicated servers won't release until (late) 2022 back in November, it's because features that are "almost ready" take another 3 months on average to release, and features that are "in development" seem to take at least 9 months. So any major feature that is not in either category (such as dedicated servers) will take even longer.
Last edited: May 30, 2021

It's going to be a long time until October it seems to me... ?

Clans first mentioned in Vol1 - May 6
I believe that observer mode was announced on Aug 4, cus they were talking about broadcasting of clan matches there.
Duel mode mode was first mentioned on September 29, same for voice chat.

So the timings should be more grim

Duel mode, battle mode, and spectator mode were first mentioned as "We're working on this" in August, and then as "almost ready" in January/February, which is why Duel and Spectator are in both categories. I've split clan system and clan matches now though, thanks for pointing that one out.

Updated the OP to add a screenshot of a discussion I found about Duel mode from during the beta:

Pretty sure battle was first teased as a "single life gamemode" so maybe search for that as well, I think both Duel and Battle have been mentioned a good bit before what you have right now.

Replay system shown working in a 2015 dev blog [I'm assuming this is a MP feature, don't remember exactly if it was explicitly mentioned - either way, it's not in as far as I know]

There is a spectator mode for custom servers, not for skirm and afaik they are working on it but it was never in the patchnotes.

What about my boi hooked spear?

oh also rejoining matches you got kicked/crashed out of?

at least they gave south american servers like armagan said

Horatius said:
There is a spectator mode for custom servers, not for skirm and afaik they are working on it but it was never in the patchnotes.
Click to expand...

If the only thing we're able to do is spectate the matches, with zero tools available, and it took this long, I'll be midly upset.

Alternatively: how to completely ruin your brand reputation.

@armagan for real, how can you still not set a statement to this disasteros happenings? MP is dead by now.
Every s i n g l e game is crashing. You were supposed to release this game by now, not turn it back into a alpha version of it.

classes still in the game instead of free equipment choices, combat is still bad, maps can be counted with 1 hand. good job on year 1.

Spectator mode was showcased and announced in a blog several years ago, but perhaps we should be charitable and assume a reset button once these things reach a certain time.

This thread is gold.

OurGloriousLeader said:
Spectator mode was showcased and announced in a blog several years ago, but perhaps we should be charitable and assume a reset button once these things reach a certain time.
Click to expand...

So when does the entire multiplayer reset

OurGloriousLeader said:
Spectator mode was showcased and announced in a blog several years ago, but perhaps we should be charitable and assume a reset button once these things reach a certain time.
Click to expand...

I think you're remembering the replay system that was shown working in 2015. That said though, if they had the tools for that working a proper spectator mode shouldn't be too hard either, eh?
You must log in or register to reply here.

Most most pressing multiplayer issues.