Issue:
There is a bug in the code which assigns focus points for lords. This is in the CharacterDevelopmentCampaignBehaivor.DistributeUnspentFocusPoints method (in the TaleWorlds.CampaignSystem.SandBox.CampaignBehaviors.Towns namespace). This causes a crash in situations where a lord doesn't have any valid skills that can have a focus point applied to them. 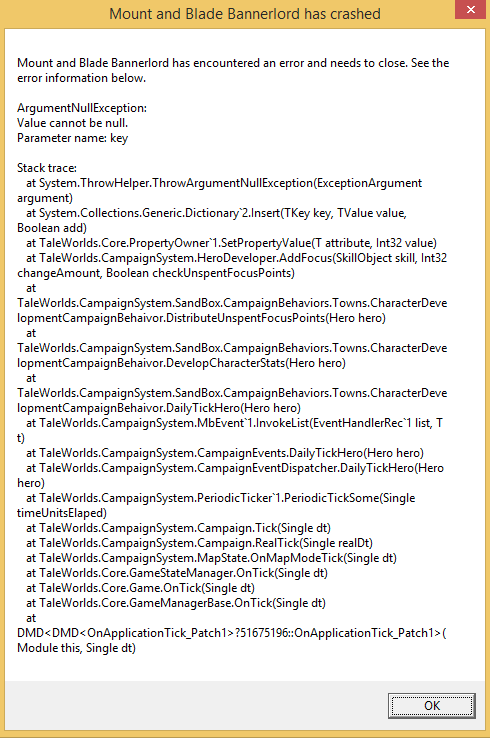 Cause:
The issue is that a null reference (for a SkillObject) is being passed as a key to a dictionary.

This will allow MBRandom.ChooseWeighted to be able to correctly return a SkillObject.
Bug Reproduction In-Game:
It is probably unlikely this would occur in an un-modded game as it would require a large amount of time for the lord to gain enough focus points to cause the error. To reproduce the bug in a time-efficient manner, change the number of Focus points gained per level to 100. The game will crash immediately when trying to start a new campaign and will crash once a lord levels-up in an existing game. Both crashes will be because of the error detailed above.

Yeah, I just spent a little while this morning debugging the issue (I'm the author for Bannerlord Tweaks). I've created a patch in Bannerlord Tweaks which fixes the issue but it would be better to have it implemented in native. You'll still get the crash eventually if you play the campaign for long enough (2 focus points per level means the crash will occur in half the time it would in native).

Hello! Thank you for your time and effort. The fix will be on live in the upcoming patches.
You must log in or register to reply here.