Advanced vassal interaction system, commands and many other things.+addition to Nobility Titles

Player, NPCs & Troops ​
1.Advanced vassal interaction system.
Select any vassal and near the Disband button, there will be a Vassal Command button. 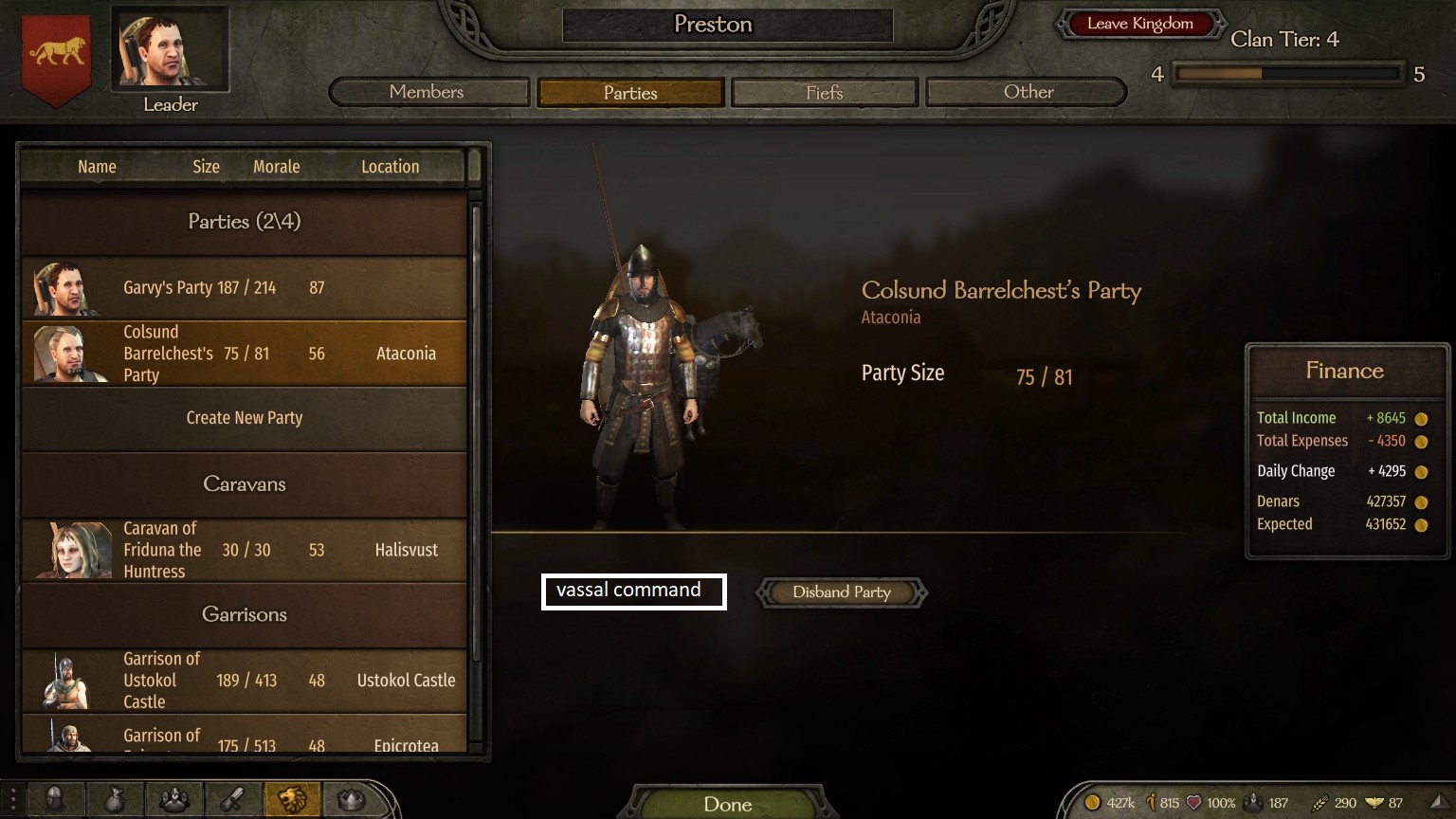 Click on the button and you get this menu: 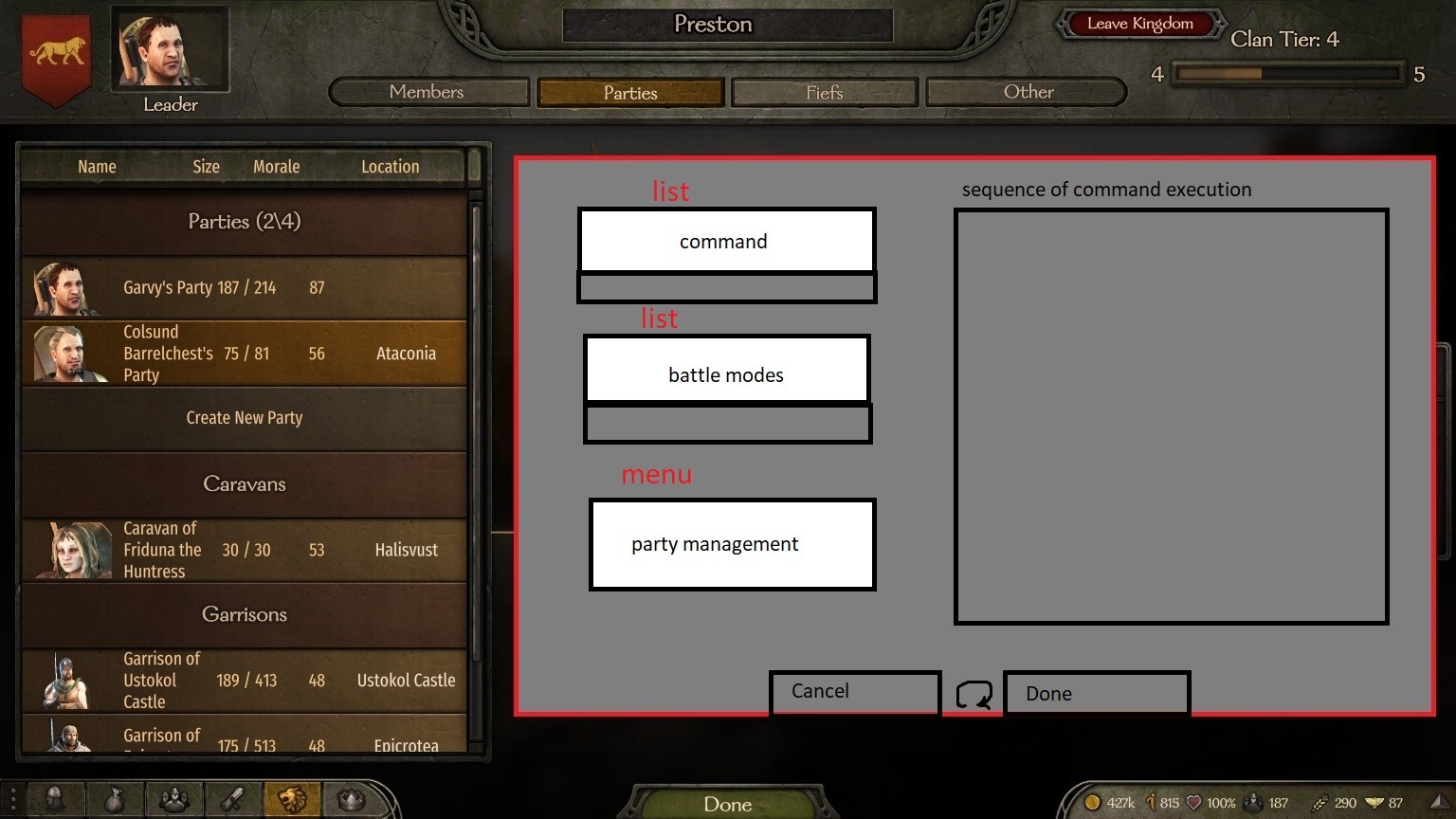 all my commands:1) automatically (normal AI state),2)patrol a specific area (a list appears: personal fiefs and nearby surroundings, including enemy ones),3)rob enemy villages (a list of villages appears),4)rob caravans,5)wait in the city / castle / village(a list or search string appears),6)recruit recruits to your own garrison (first a list will appear from which fraction to hire recruits, then a list of my fiefs will appear),7)send a vassal for companion in the tavern (a list of companions in the tavern appears).
8 )come to the city and leave the loot (unless of course AI, something falls out of things after the robbery of villages and caravans, if they get only money, then this command is not needed).
all my battle modes:1) automatically (normal AI state),2)never fight (even if there is an ally nearby),3)engage in battle only if there is an ally nearby/help an ally.
Note: 1)The command is automatically set to infinity by default. 2)Be sure to set the battle mode. 3)reset button, resets all commands in the "command execution sequence" window and battle mode. 4)after executing a command or a chain of commands, the command "automatically" is set by default. 5)when the “patrol” command is selected, the number of digits at the end indicates the number of days when the vassal will be near a certain object. 6) "when sending a vassal for a companion to the tavern", there are no numbers at the end, the same for the command "come to town and leave loot"
Here is an example of a normal AI state: 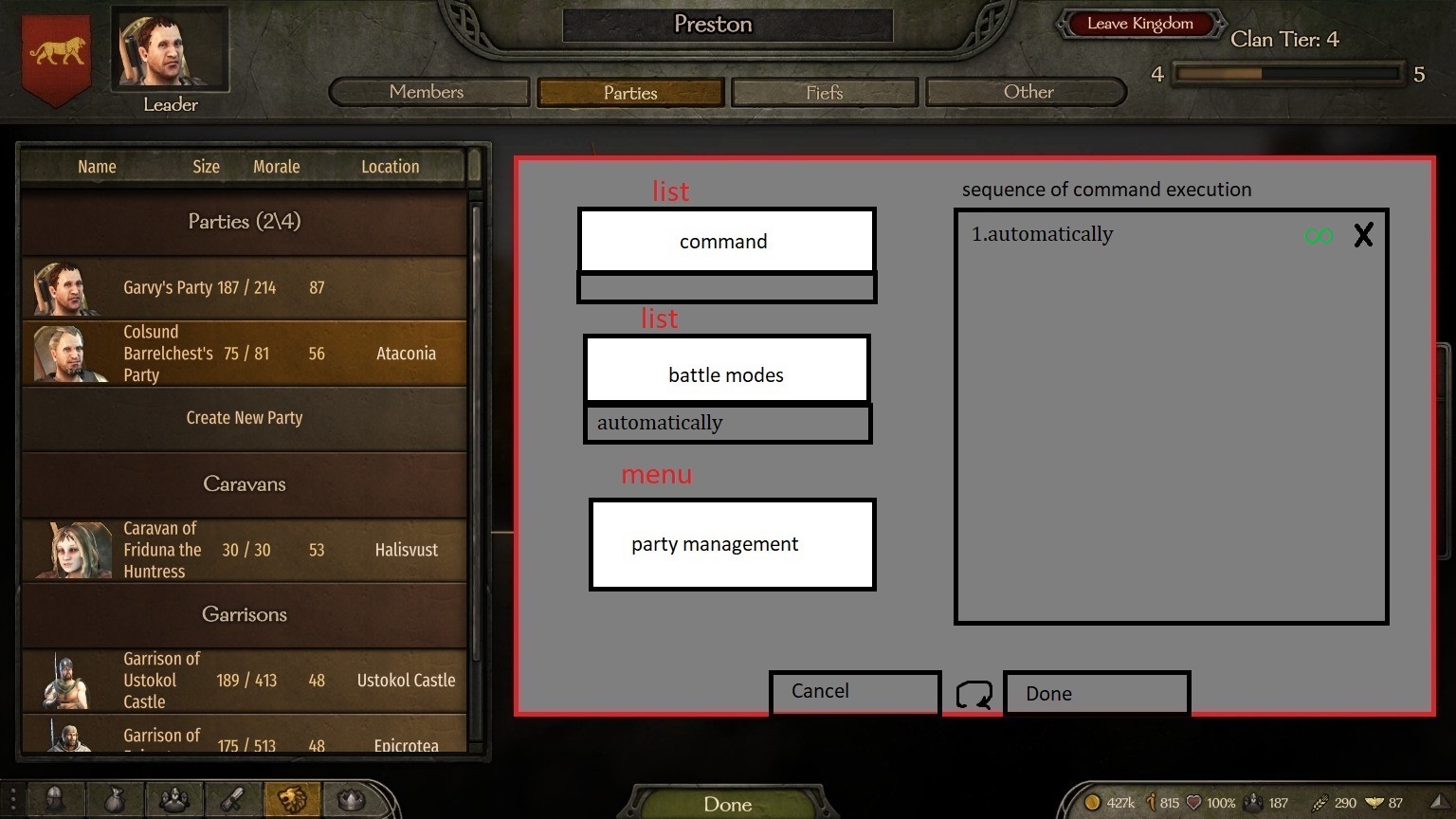 Another command with explanations: 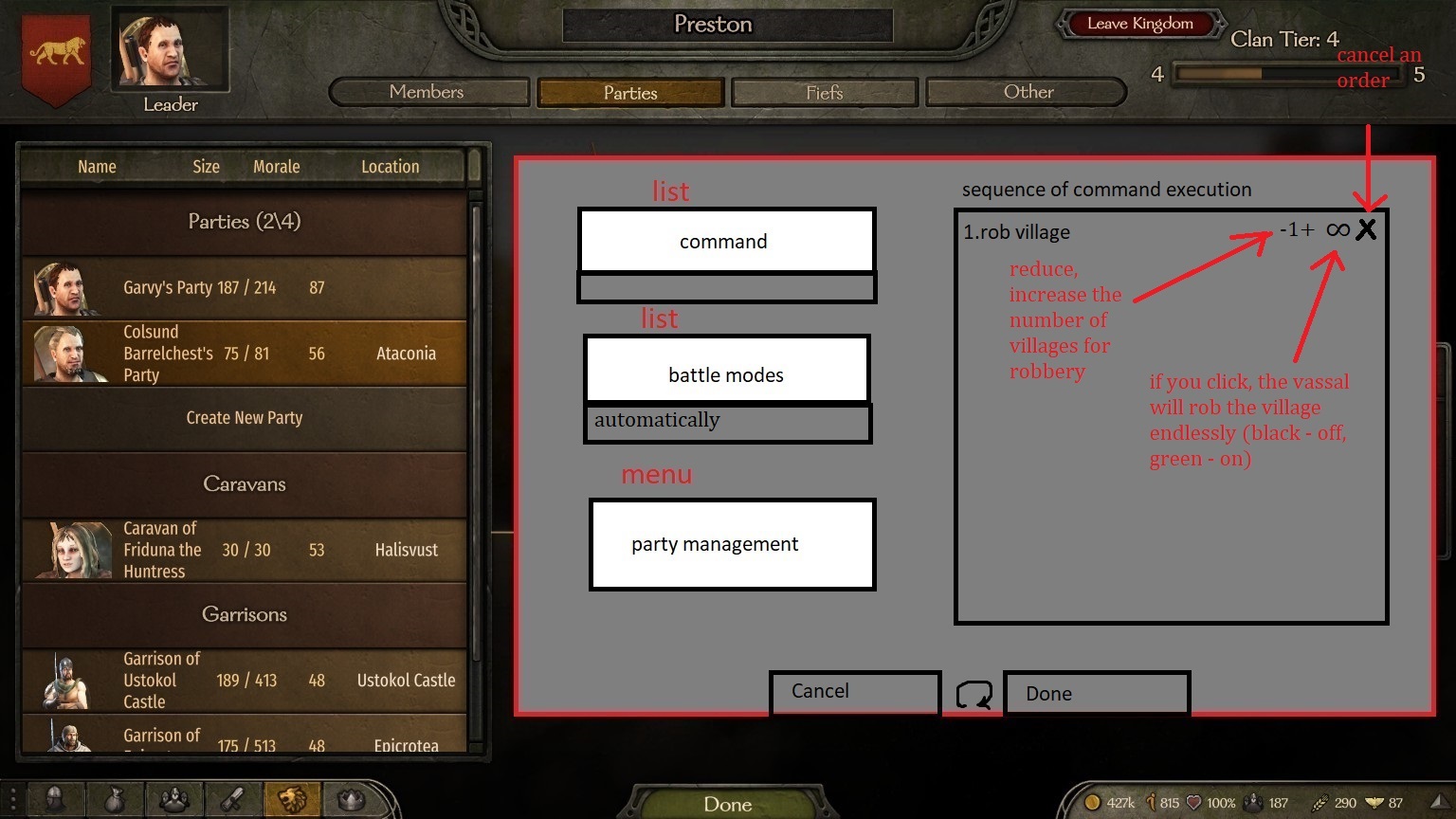 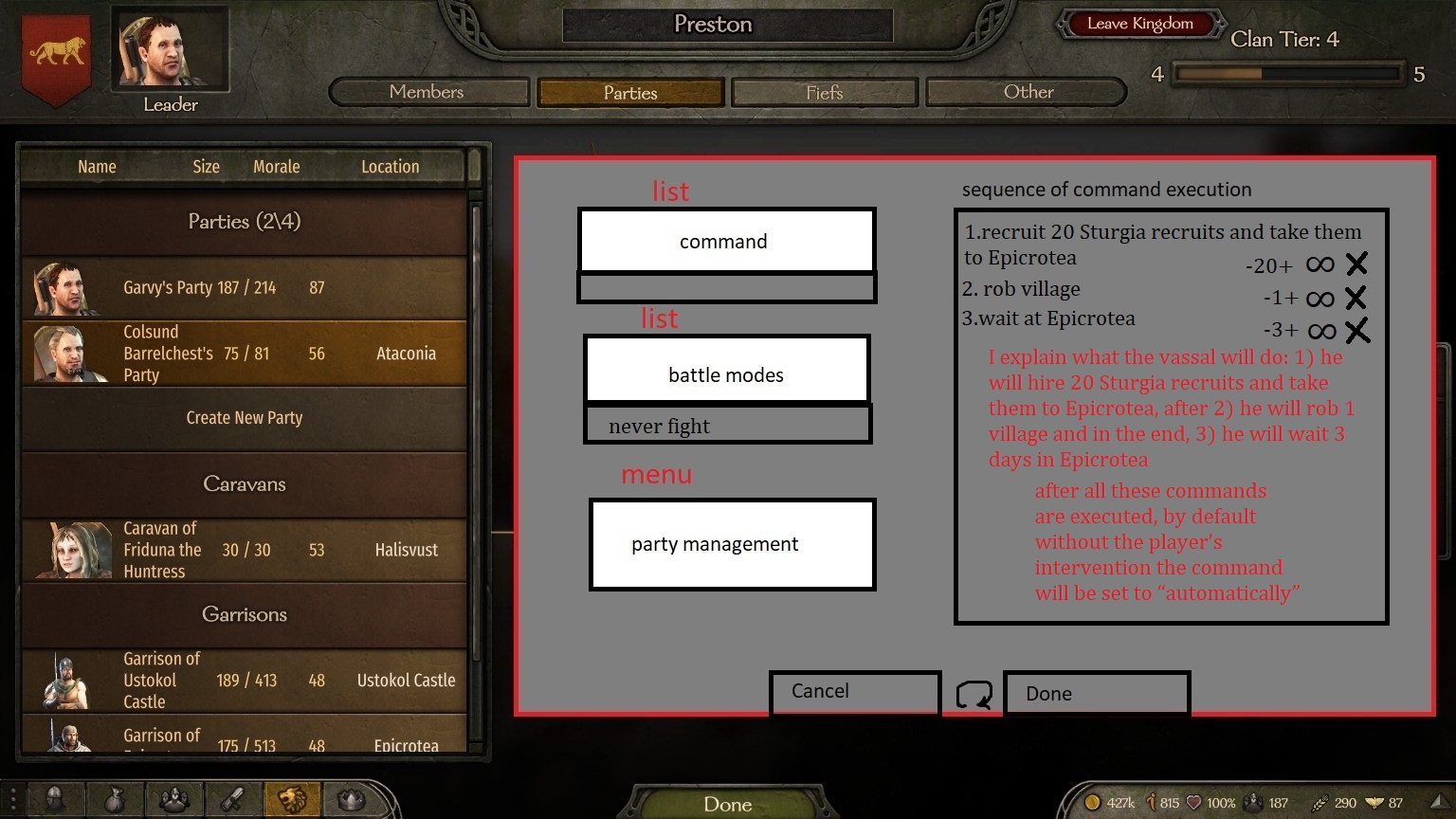 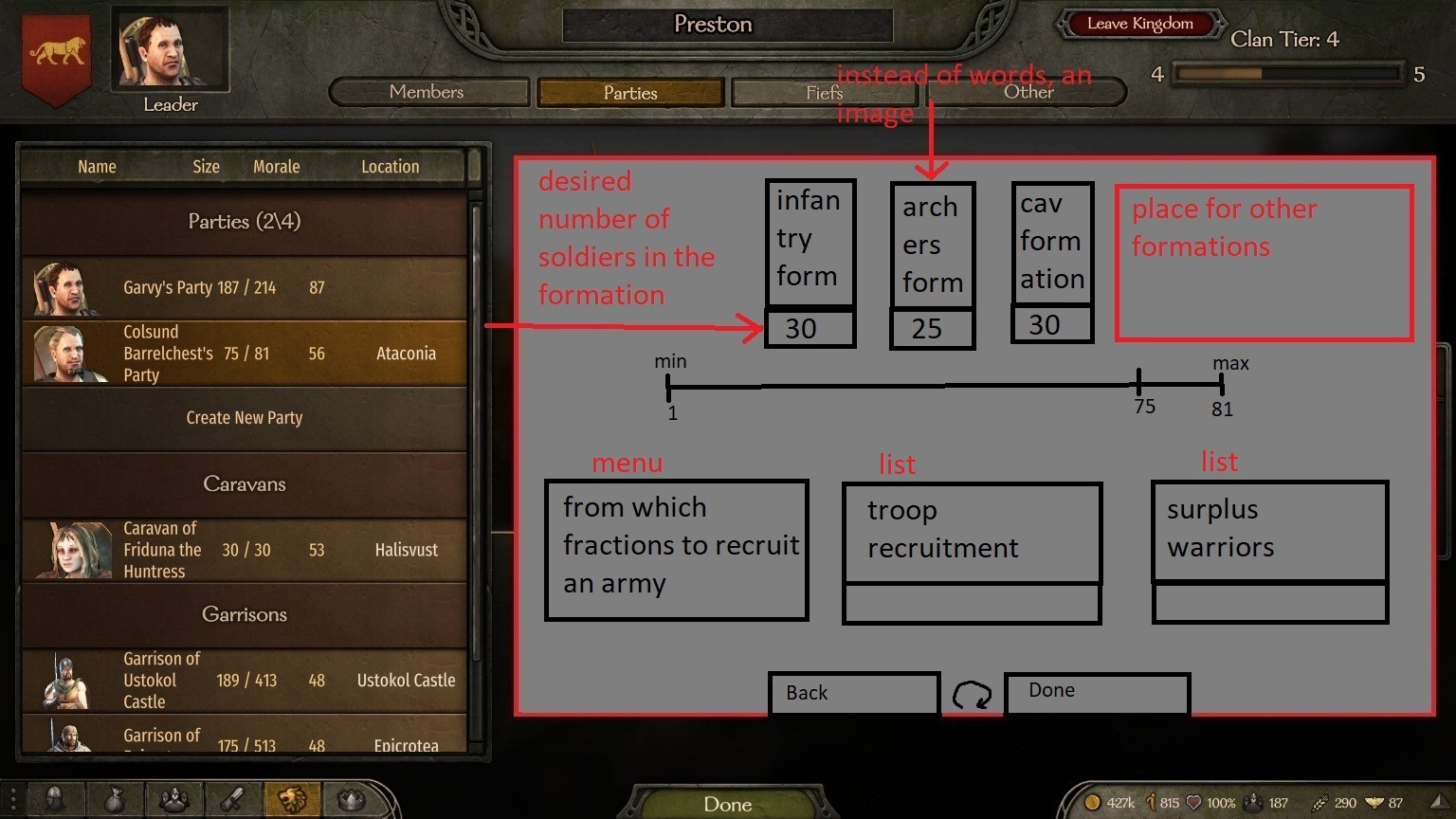 All my settings for troop recruitment: 1)automatically (the vassal will run around cities and etc and will recruit recruits himself), 2)personally (the vassal will not run around the villages and buy warriors, he will wait until you give him a soldiers).
All my settings for surplus warriors: (this function is needed so that the AI knows what to do with surplus or unnecessary soldiers in its army) 1) dismiss a soldier , 2)leave in your garrison, 3) leave in a friendly garrison for influence.
Note: click on the numbers under the formations and select the desired number of soldiers of a particular formation.
Now we will go to the menu "from which fraction to recruit recruits in the army": 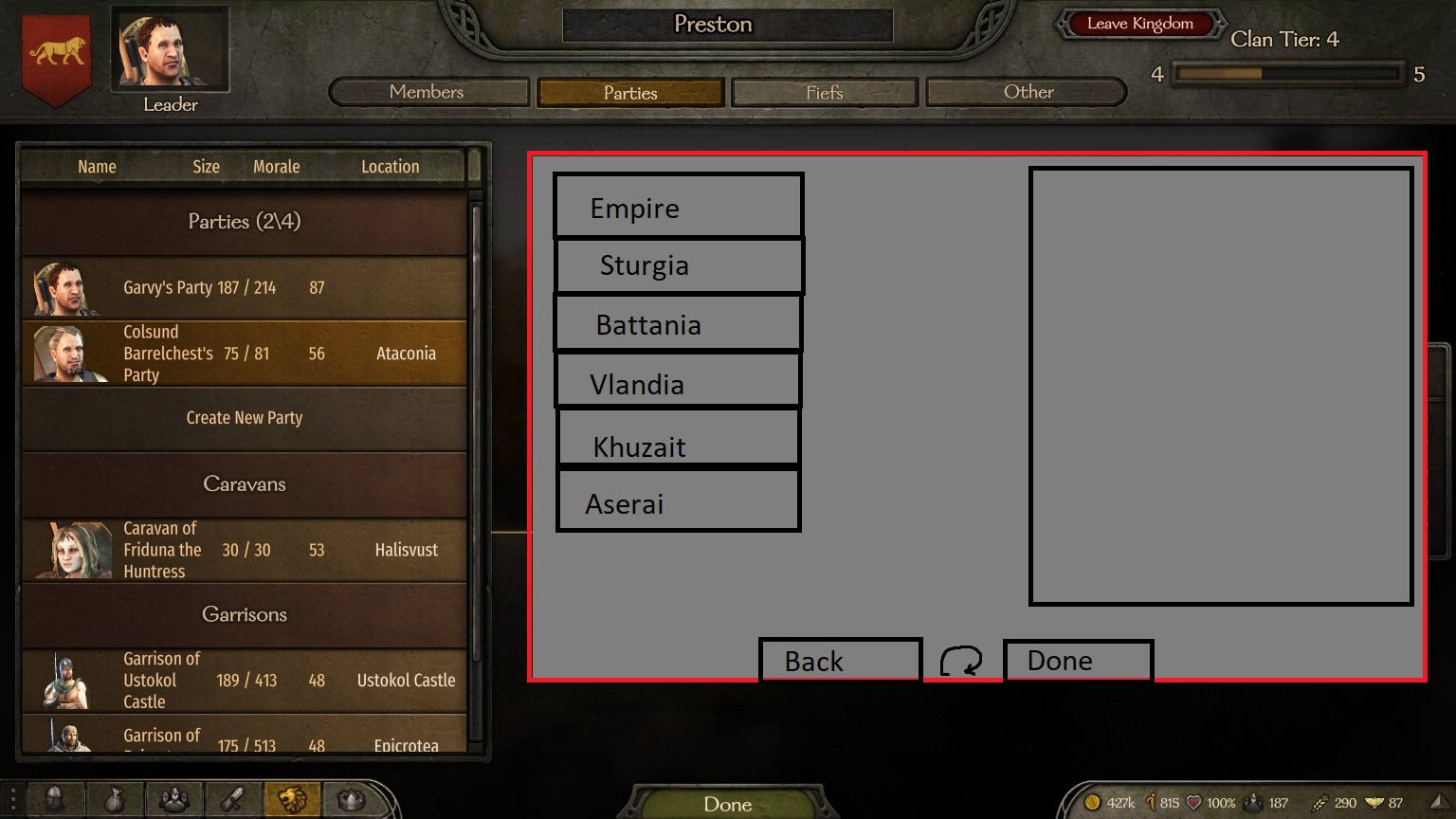 On the left we select a fraction from which there will be soldiers and on the right they will be displayed.
Also, if we choose a unit from the middle of the branch, then they will not develop further. 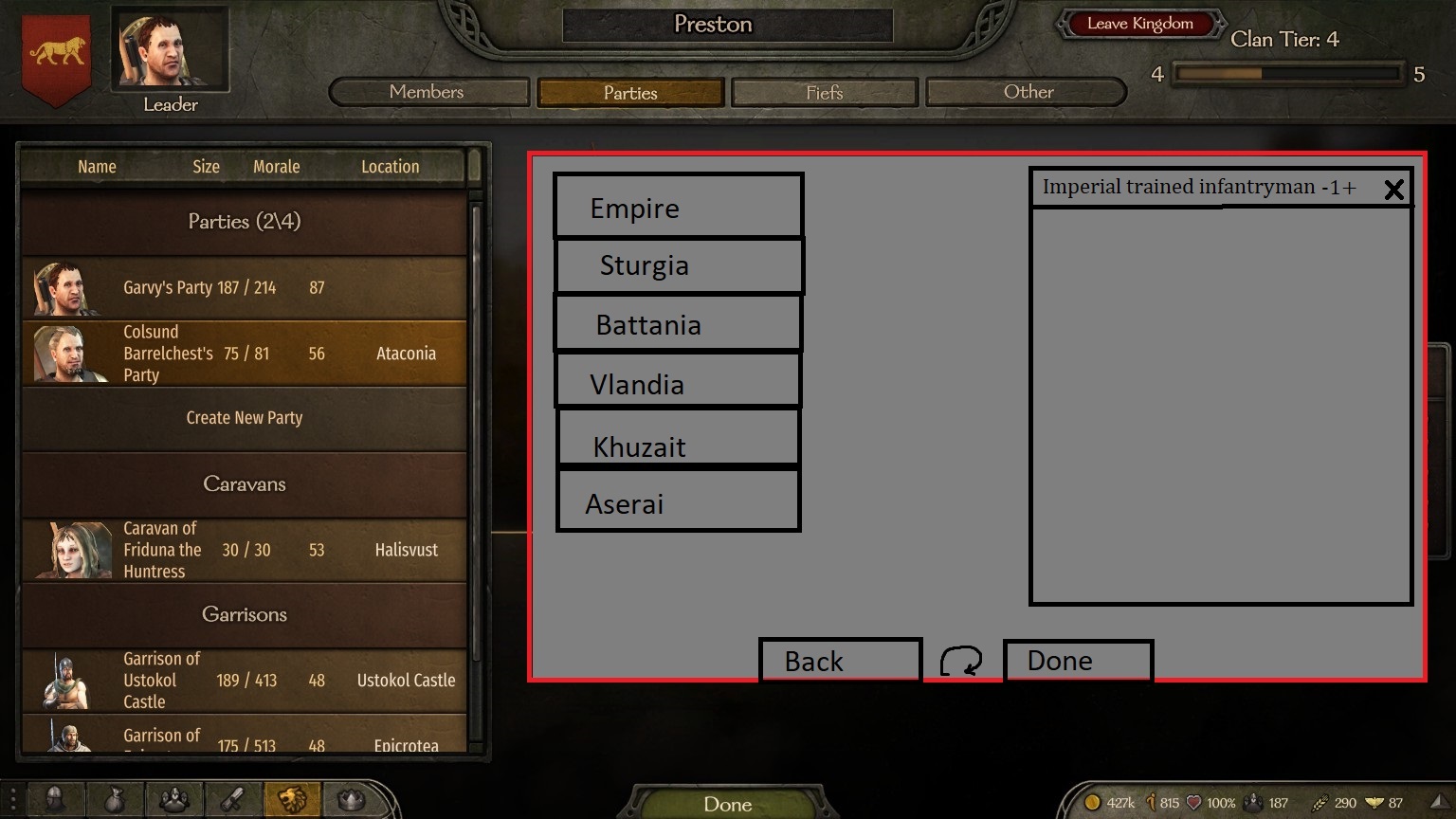 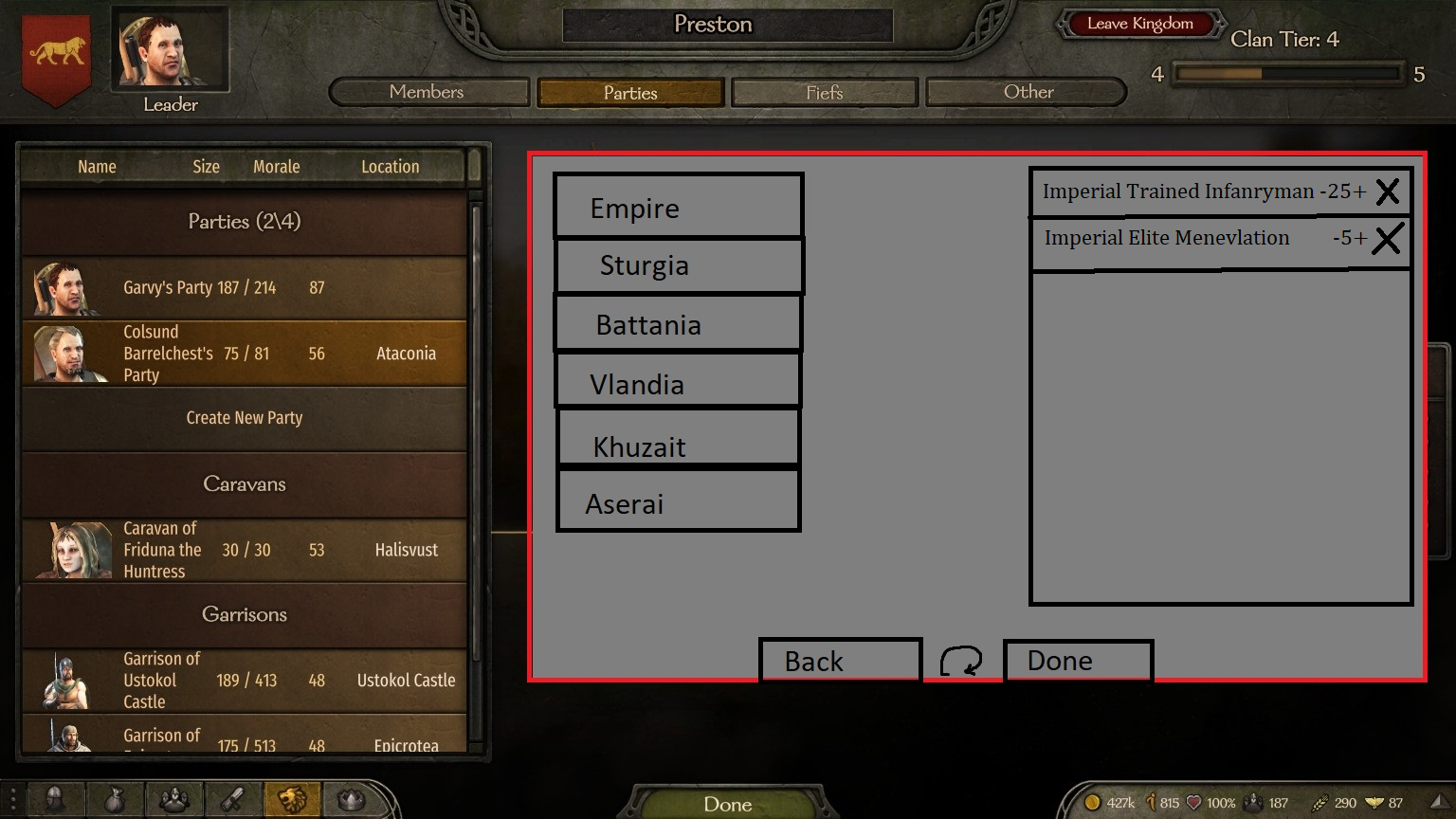 In the picture we see 25 trained infantryman (they will not develop to legionnaires) and 5 Elite menevlation. I explain: first the AI will train 25 infantryman, and then 5 Elite menevlation. If you choose legionnaires instead of trained infantryman, the vassal will develop them to the end.
If we didn’t select a unit, but the formation says 20 people in the Archers formation, then the vassal will recruit archers at his discretion (of all factions).
When we select any fraction the following menu appears: 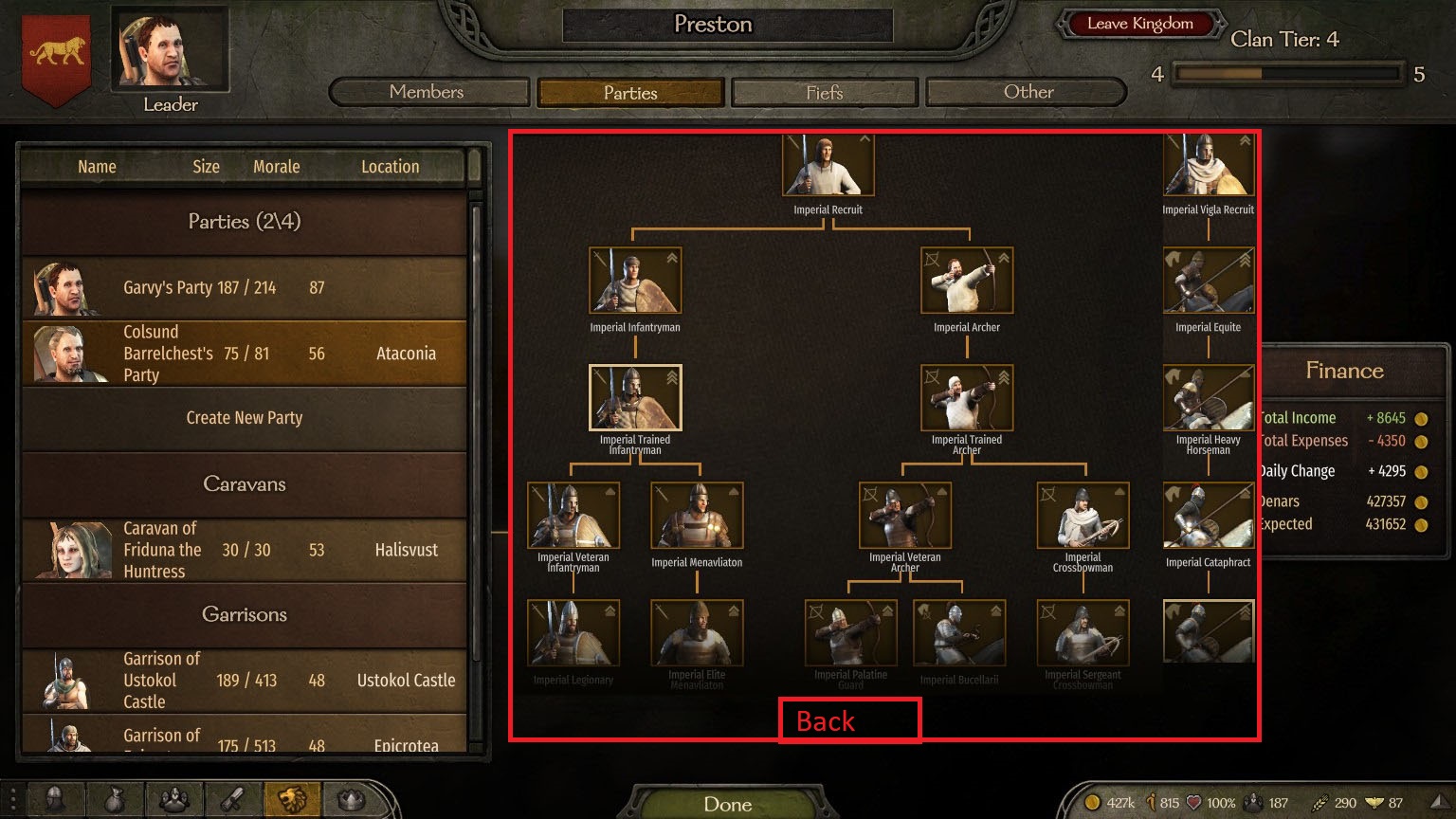 P.S. : I know that it seems too complicated (I spent 5 days: 3 to develop a concept and 2 to implement), I hope that I gave food for thought to the developers and they will simplify my system, maybe make it better.

2.Commands in the talk menu for vassal or lord, if they are in your army.
1.1)Go to the conversation menu, click on the line "I want to give you a task" 2) Choose a command: attack the enemy, attack the village.
3)Then a sword appears on the global map instead of the cursor and click RMB on the enemy or village, depending on the command.
2.Send to the city / castle to bring part of the garrison and return to the army (the garrison menu appears and you select the required number of soldiers).
3.
I think that it would be nice if before sending the companion(when we make a vassal, he appears on the map without food and begins to starve) you could give him food . Of course it would be nice if the developers added the function of sending a companion (if you are alone in the army) and / or a vassal (for gold or influence) from the army to buy food in villages or cities.
For example, if you send a companion, you must allocate soldiers and gold (I think 1000-2000 gold is enough, the main thing is that this does not break the region’s economy much) and horses if you want.
If you send a vassal, you just need to pay him (or spend influence) and give money to buy food.
Can be implemented as follows: a companion and / or vassal will buy food until gold runs out or for a certain time (3-4 days) .
Of course, it would be nice if you could set up what kind of food to buy so that he would not buy up expensive food.
Sometimes it infuriates me myself when I need to drag the entire thousandth army to some village for food, instead of sending someone (like us in the Warband) for food.
Of course, developers could give such a function to bots (if AI allows), so that the commander-in-chief sends one vassal and can be intercepted, that would make sense, since you 1 (even with 200 soldiers) will not kill the thousandth army, but the hunger of them all will kill, and if not even kill, it will completely destroy morality, as a result of which the army will collapse.

3. What I would like to see in the game.
1)add the ability (clan role) to make a sergeant from the companion in the army and add him to the group, for example, the presence of a sergeant in the army increases the morale of the detachment, if we give the command to independently manage the formations, then the sergeants will pump the appropriate skills (tactics) this is needed for my formation system.So that to completely move away from command and control (if you are a merchant or you have poor tactical and leadership skills) and just watch the battle.
2)level up, change equipment a companion who is in your army or just met (for vassals and caravans).
3)1.call up mercenaries in the army, make them lower morale, but they fight for money, not for the king. (in reality, mercenaries took an active part, even sometimes had a turning point in the battle),2.the ability to renew the contract with the mercenaries (make it the same as in Warband that when the contract comes to an end we have the option to either renew the contract with the mercenaries or refuse to renew).
4)start the game young (20-25 years old)
5)add some low-level companions, create for the start of the game 10-15 unique companions (maybe they will somehow participate in the plot / tell the plot), some are incompatible with each other.
6)when any of the allies creates an army, disable the function to run towards him.
7)add drums, horns, the ability to knock the shield on the ground (for large shields), the sound of marching, hard screams on the battlefield.
fully support: Sound(s) overhaul! by Bwcon , Immersive Things that i think would be good for the game by cyresdog
8 )my additions to Nobility Titles & Politics by JurgenJuggernaut
1. split up concept drafted into the army and invited to the army.
1)When you are drafted into the army you are obliged to arrive or your attitude will deteriorate (only your overlord can call you: King, Duke, Count, Baron).
2)When you are invited to the army, you can not come and you will not be anything for it, but if you come + relationship (everyone can invite).
2.Make a limit on the number of fiefs for yourself (up to 4, +1 or 2 of skills), if the limit is exceeded, then there will be a decrease in the efficiency of tax collections by 90%, a slowdown in the construction of facilities in settlements, a decrease in the prosperity of a settlement. 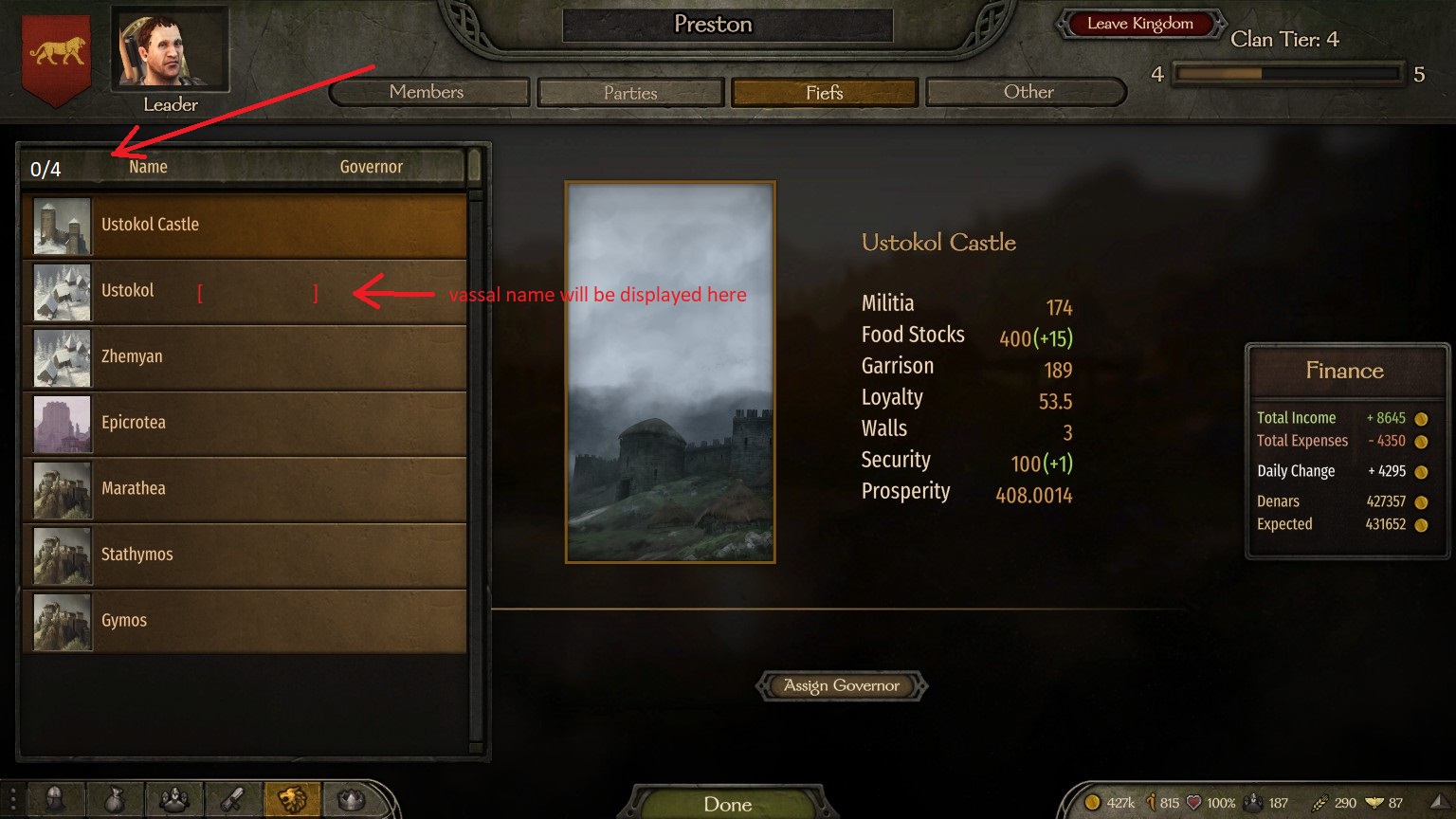 3.the ability to choose a spouse for his vassal, he can agree or refuse to depend on the relationship.
4.give your fiefs a vassal, thereby making him a baron, count or duke, having relieved yourself of responsibility for managing the settlement (you cannot make a vassal of a count or duke with only one castle or city, since you automatically become lower on the social ladder than yours vassal).
5. this mod is great for the topic : mod
9)it would also not hurt the game : mod

Please comment, your opinion is important to me, report errors in the text, if any. ask questions.

Some very detailed, and i suppose very complicated to do suggestions.
Would be helpfull if you could stick to a category per thread, example, now delete the UI part from this thread, rename it, and open a new one for the UI part alone. Then i can move them each to their own categories and probably put them in Top Curated list, since i like them both, even though i believe some of the suggestions coyld be very hard to achieve.

Now, since because of the mixed content it lacks uniform category, i could put it in the "Compilation threads", but it's not stricktly a compilation thread by definition.

Piconi said:
Some very detailed, and i suppose very complicated to do suggestions.
Would be helpfull if you could stick to a category per thread, example, now delete the UI part from this thread, rename it, and open a new one for the UI part alone. Then i can move them each to their own categories and probably put them in Top Curated list, since i like them both, even though i believe some of the suggestions coyld be very hard to achieve.

Now, since because of the mixed content it lacks uniform category, i could put it in the "Compilation threads", but it's not stricktly a compilation thread by definition.
Click to expand...

Meaning just copy-paste everything from UI from here into a new thread (preferably in UI section), and then delete it from this thread, i'll handle the rest.

Meaning just copy-paste everything from UI from here into a new thread (preferably in UI section), and then delete it from this thread, i'll handle the rest.
Click to expand...

I followed one proverb: There's an old saying that empty vessels make the most noise.

+
It would be nice to have so many detailed settings in the game.