WHAT IS THE BBG/NRP CAMPAIGN?
The NRP/BBG Campaign in the Mount & Blade: Warband - Napoleonic Wars DLC is essentially a hybrid of regimental play hosted by two experienced server communities providing large scale scenarios with enough rules to bring immersion and organisation to the public. The campaign is an European and North American cooperation which will enable us to not leave any player out due to odd hours.

Campaigns are set in a quasihistorical world which the developers have expanded the lore of since late 2017. The public players will be able to decide the geopolitical outcome and consequences through their actions in-game. Each faction army has a command structure, which any player can apply to become part of. These in turn have designated leaders who act as the go-between for their faction and the admin team during their map turn. There are victory conditions and mechanics in place to allow for a tactical progression of the campaign based on the outcomes of battles, allowing for an immersive and dynamic experience unparalleled in Napoleonic Wars.

Battles proceed in the BBG/NRP campaigns similarly to those you would see in a typical regimental match, with the exception of minor adjustments to accommodate the public nature of the server. Players are free to pick any unit available, however, officers are chosen prior to each event by the faction leadership, and everyone has to follow the basic concepts of line battles and respect each others.

Organisation
1. Follow your officer. Flag-beacon is displayed above his head due to server scripts.
2. Cavalry must follow general. Flag-beacon is displayed above his head for all cavalry due to server scripts.
3. If your officer is killed, stay in a group with a flagbearer, or an other special unit until you meet up with another line.

Public Play
10. Crouching is allowed.
11. Firing in charge is allowed, until an all-charge is called.
12. Officer aiming is not enforced.
13. Regiments can offer their services and reserve an officer slot by contacting one of the faction leaders.

Battle Phase Terminology
Not Live clarify the event has not started yet, nor has ended.
Live means the event has started and rounds lost/won will influence the score.
All Charge means all players must stop reloading and attack the enemies closest to their position.

1. Read the guide on how to play as the admins announce it in the admin chat.
2. Do not spam the chat with similar or unnecessary messages. Keep your names clean and tidy.
3. We encourage people to use English. Keep other languages to a minimum, or via external chat programs.
5. Regiments are allowed to recruit once per 3rd round. Affiliated communities may recruit whenever.
6. Complaints, ideas or apps should be made on the forums to allow for a persistent conversation.
8. Don't say things to hurt others. Don't chat about explicit content; racism, pornography, violence or threats.
9. Don't chat or otherwise use someone's personal information, photos or any other identifying content.
10. Don't flame. Don't use language intended to make it unpleasant to be a part of our community.
11. Don't raid us/others. Don't leave a bad impression here or anywhere else.
12. Don't bait. Use DMs or a mediator to solve quarrel.

Source
We'll be introducing 3 gamemodes from NRP to the campaign to counter repetitive battles these will be siege, cavalry versus cavalry and cavalry versus infantry. We've noticed how stale the campaigns has become with battles that would play similarly round after round, so with the introduction of these new game-modes and measures put in place to reduce camping during the classic battles, we hope to shake-up and improve the campaign a lot with these changes, removing the biggest problems people have had with the campaigns.

We've decided to revert back to the best-of-7 system. This means 3 maps may be used for a battle; 3 rounds on the first map, 3 on the second map and it could be a tie-breaker on a random final map. Furthermore, provinces in the centre of the map that are likely to see the most action will have 1 map bound to the province. This will mean that recurring battles in the same province will lead to the 2nd (3rd, 4th, etc) Battle of that province, this will give armies the opportunity to learn the maps and use more bold tactics to take advantage of their experience on the map.

Cavalry versus cavalry / infantry has been implemented as a gamemode in order to support the new mechanic called scout armies. These scout armies will be able to move further than the main armies in a single turn. Being able to manoeuvre around the enemy armies will give them the option to take lightly defended towns and cities. However, they will be made up of only a few divisions, this means if they are caught by a larger army; then a cavalry vs infantry scenario will begin and if the scout army is defeated then it will be wiped off the map. Although, the speed of these armies means the only thing likely to catch them will be other scout armies, if one scout army is caught by another scout army then a cavalry vs cavalry scenario will begin for the first 3 rounds on the first map.

Siege maps will be used instead of town maps when a battle occur on a city tile. This should further lead to a defender/attacker behavior, together with less issues with rulebreakers and balance.

LEADERSHIP APPLICATIONS
Leadership applications have previously been released on our forums and the FSE forums, however leadership is still available for some regiments and to help with strategical decisions, you may also apply beneath this thread using following template:​
In-game name:
Discord name:
Steam URL:
Preferred role: Faction Leader, Second in Command, General or Officer
Preferred faction: Felderburg, Poitres or Breytona
Why would you like to lead:
Why would you be a good leader:
Last edited: Oct 3, 2020

Make sure to join the discord for the best time.

First battle begins now between Poitrés and Felderburg on the NW_Public_Events server with 136 players and more incoming. Start the game and join us for a great time, and one of the last times the public battle mode will be popular in the Napoleonic Wars DLC.

We had as many as 450 attendees in total during the three events past weekend. The third and fourth EU battles are set to begin this Saturday and Sunday with the NA battle in between them. Same time, same servers. See you guys on the battlefield! 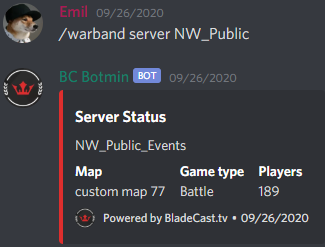 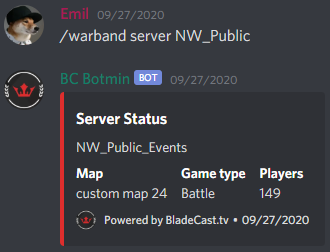 (Should you ever come back to this) Single-player campaign for 1880s mini-mod maybe?