How long did Emperor Arenicos reign?

This is such a minor question, so I’m rather embarrassed to ask.

The Devblog from February 8, 2018 states Arenicos became the Caladric emperor twenty years before the events of Bannerlord.

But in the course of playing the EA, I find out that Arenicos becomes emperor after Nereztes dies at the Battle of Pendriac. The battle took place in year 1077 and the game starts in year 1084.

Therefore, should we conclude the length of Arenicos’ reign has been adjusted since that Devblog?

Frankly, I like the idea of Arenicos ruling for twenty years rather than seven as it gives him time to have married Rhagaea and fathered Ira within the period of his reign.

It's not an embarrassing question, I actually had the same confusion. I am operating under the assumption that the lore changed during development, so while the dev blogs are still our useful benchmark, anything that's actually in the game takes precedence. But of course, I'm sure it's all subject to change so who knows.

Given the dates of Pendraic and all that, I'm going with 7ish years for the reign of Arenicos (depending how much earlier from game start that he died). That means, unfortunately, the marriage didn't occur during Arenicos's reign so the whole thing about the shoring up of an eastern trade treaty doesn't make any sense at all.

But I think that's intentional? Rhagaea's dialogue on Pendraic indicates they were definitely married BEFORE he became emperor.

This also means that Ira was not "born in the purple," as it were (not that the Calradic Empire follows that particular Byzantine tradition).

Ok, I could get on board with that. You do get the sense of incomplete lore when you look at the description in the Encyclopedia for the villages and you see they reference the landforms of the old Bannerlord map.

dphilostrate said:
Ok, I could get on board with that. You do get the sense of incomplete lore when you look at the description in the Encyclopedia for the villages and you see they reference the landforms of the old Bannerlord map.
Click to expand...

Yeah, the geography is all out of whack -- referring to rivers that don't exist, grapes and olives growing in alpine climates, etc. I am guessing it's all going to get a rework pass at some point.

It impacts lore too -- it's still unclear where (for example) the original Imperial homeland is from. Supposed to be the hill country between Battania and the southern sea, but the village description for that area (western empire) implies it's borderlands?

Same for the Imperial capital of "Baravenos." Dev blog implied that the Vlandians conquered it, and most people assumed that was Pravend -- but settlements.xml gives it a different Calradic name. So was there a lore change? Where was the old capital located? Did the capital still move from place to place like the Empire dev blog said?

Who knows! Definitely hoping for more lore clarification at some point...

Well, whole settlements have moved apparently also. Compare the in game map to this one. So I think the geography changes probably correspond with or necessitate some lore changes. 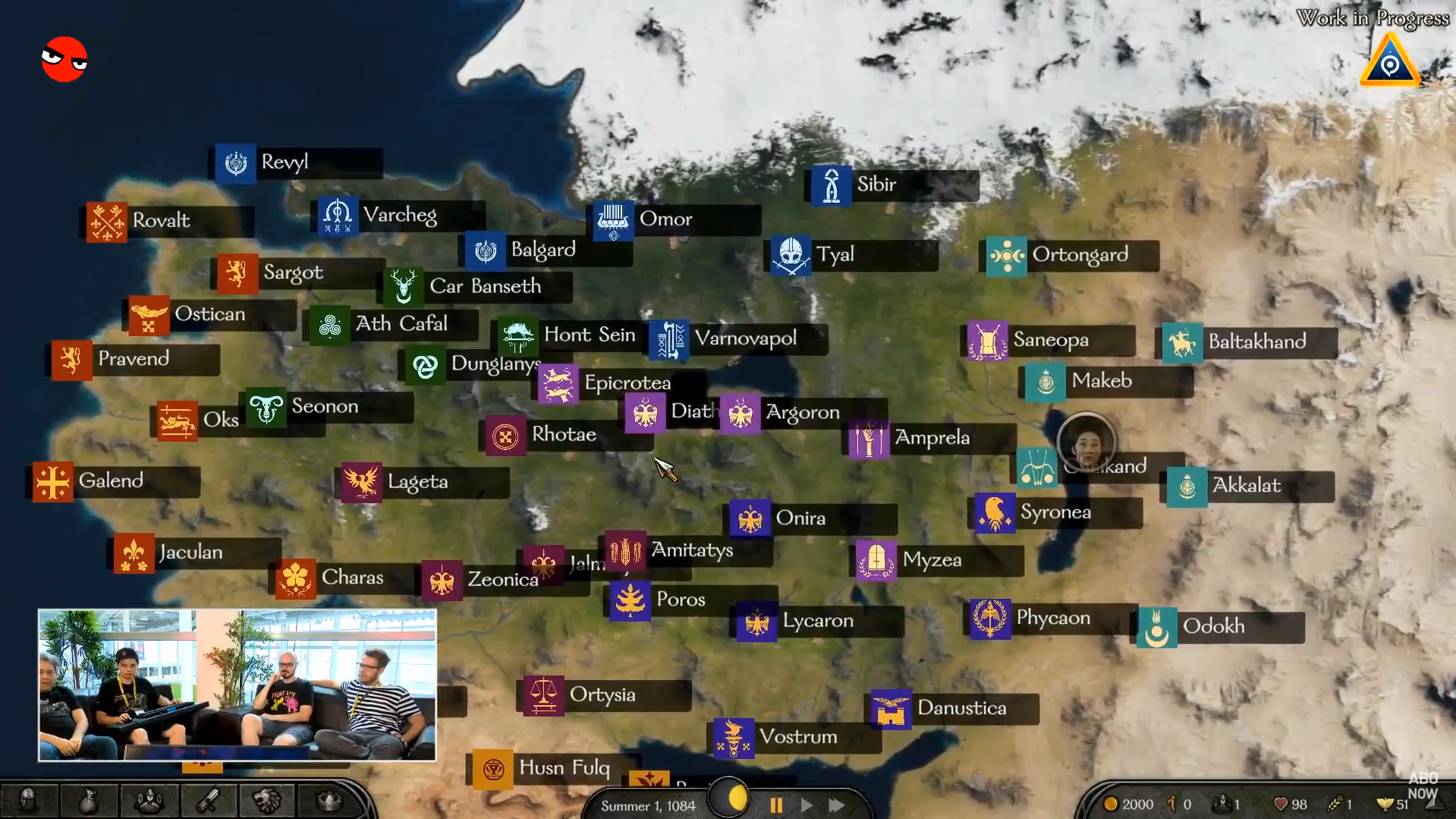 I know that fixing the village descriptions or defining the length of Arenicos‘ reign is probably a low priority right now. But I hope someone will tell the narrative designers that we appreciate that sort of detail.
You must log in or register to reply here.