Hey, I've started noting this lately: I go into a siege with (usually all 3) siege engines. When the battle starts, a few men crank the towers and ram forward... and the large contingents of melee troops parked behind them fail to advance.

I haven't figured out whether this happens when I place the groups, when I use Auto Deploy, or both.

So, who knows what the fix is? There isn't any "follow siege engine" command. My options have been to let the crew get set up, then tell the shirkers at the back to charge. That's far from ideal. For one thing, they have no cover from archers when running to the walls. For another, they usually ignore the gate - where the outer one is rammed in but the inner one hasn't been chipped away, for want of troops.

In this picture, you can see the near tower has no following. I was hopeful the far one was being attended, but it was quickly apparent that the troops there were the archers, skirmishing, and the melee group was still at the rear. 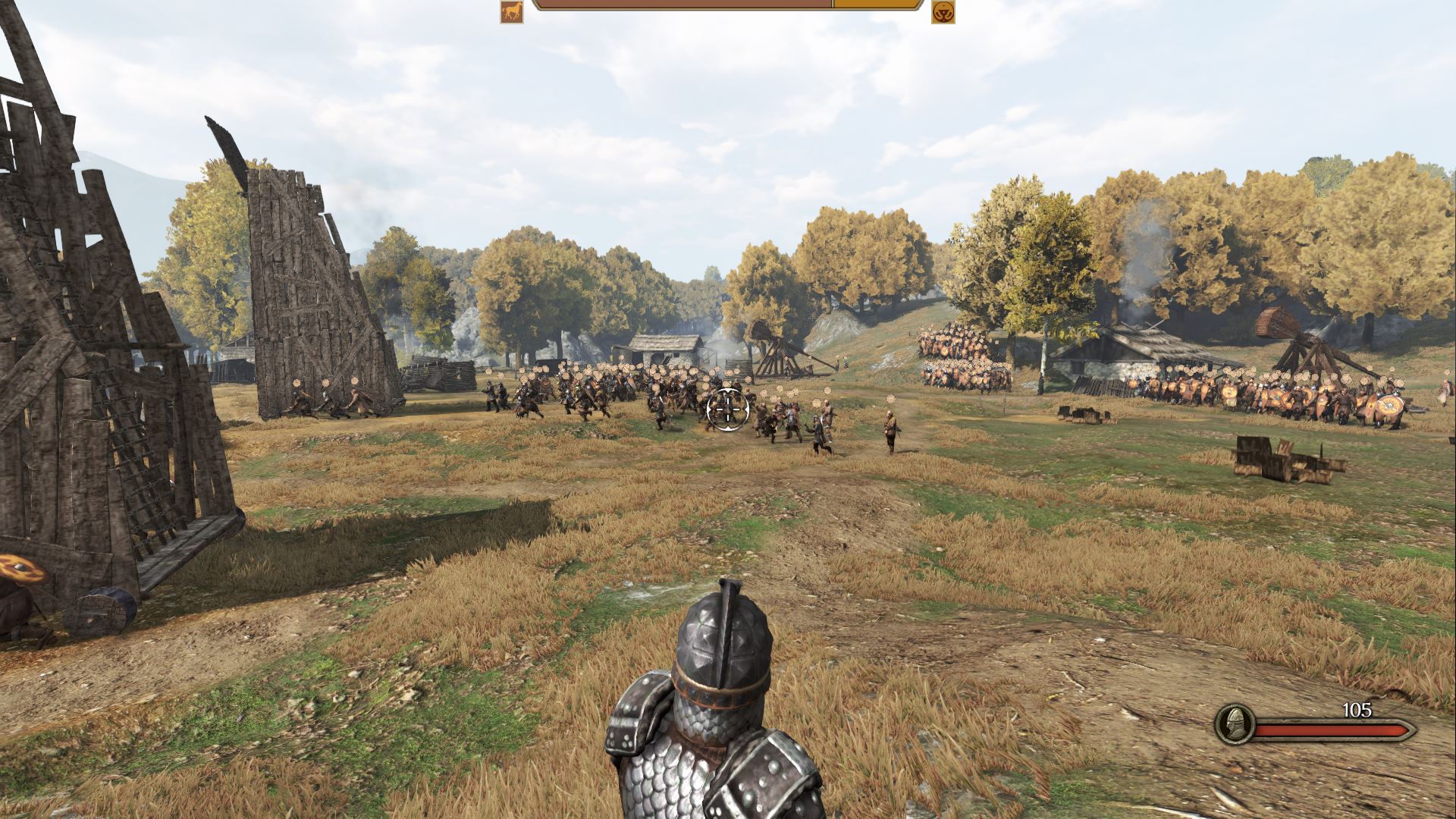 i think there was a middle button when you put your crosshair on the siege engine that a squad should get on that siege engine, but not sure and havnt used it a long time ago.

I'm defending a siege right now in the game and the same thing happens and honestly, it's been happening for me since a few updates ago, maybe two months ago now. Whether I'm on attack or defend, for some reason the attackers just stand still. no idea if its a bug or what to be honest, I've just avoided sieges completely. thankfully, it does mean my 100 crossbowmen are slowly decimating about 1300 sturgians who are all standing still.

just got myself wounded so I could speed up the battle and suddenly the sturgians are attacking, so the fix to this is to kill yourself.

the sturgians are having trouble climbing ladders so sieges are just broken, still, and I am going to continue to avoid them at all costs. that is the true fix

Siege Towers have been broken for a long, long time. Even if they do follow the towers, they often won't climb the towers or if they do it will only be a handful that will while everyone sits at the bottom of the tower being killed by enemy arrows. Also the second the gate goes down, instead of trying to put pressure on the enemies at multiple points, often the men who wouldn't climb the towers, will immediately rush the gate.

Honestly I have kind of stopped using towers because the ladders are much more effective at getting men to the top of walls.

Try to yeet yourself over the wall without being killed and open the gate to let the whole army in. Practice in a custom siege battle. Pretty sure the AI can’t close their gate.
Kinda funny when it works.

Here's a recent battle. I'm up front, potting archers on the walls. Then I notice that there isn't much going on around me...
The bar graph shows I have tons of troops left. 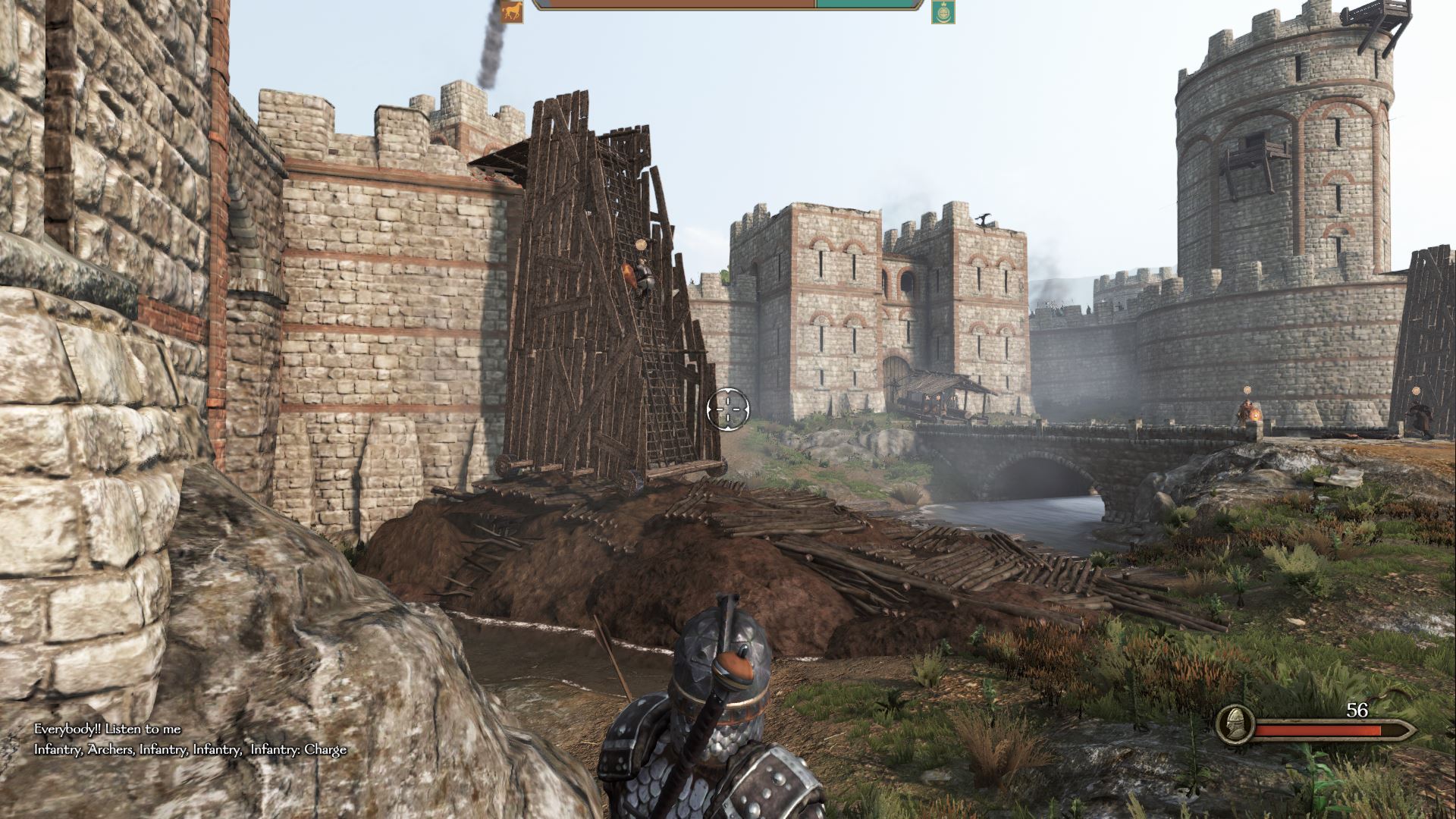 And here is another curiosity: Troops that GET to the towers, CLIMB the towers, BEAT the crush on top of the walls,,, then stand there. This picture is still so it doesn't bring across that NO ONE in the picture is moving, except maybe the guy on the ladder. All those nice kill notices are happening elsewhere. I was already wounded, so I couldn't yell at them to stir their lazy bones. 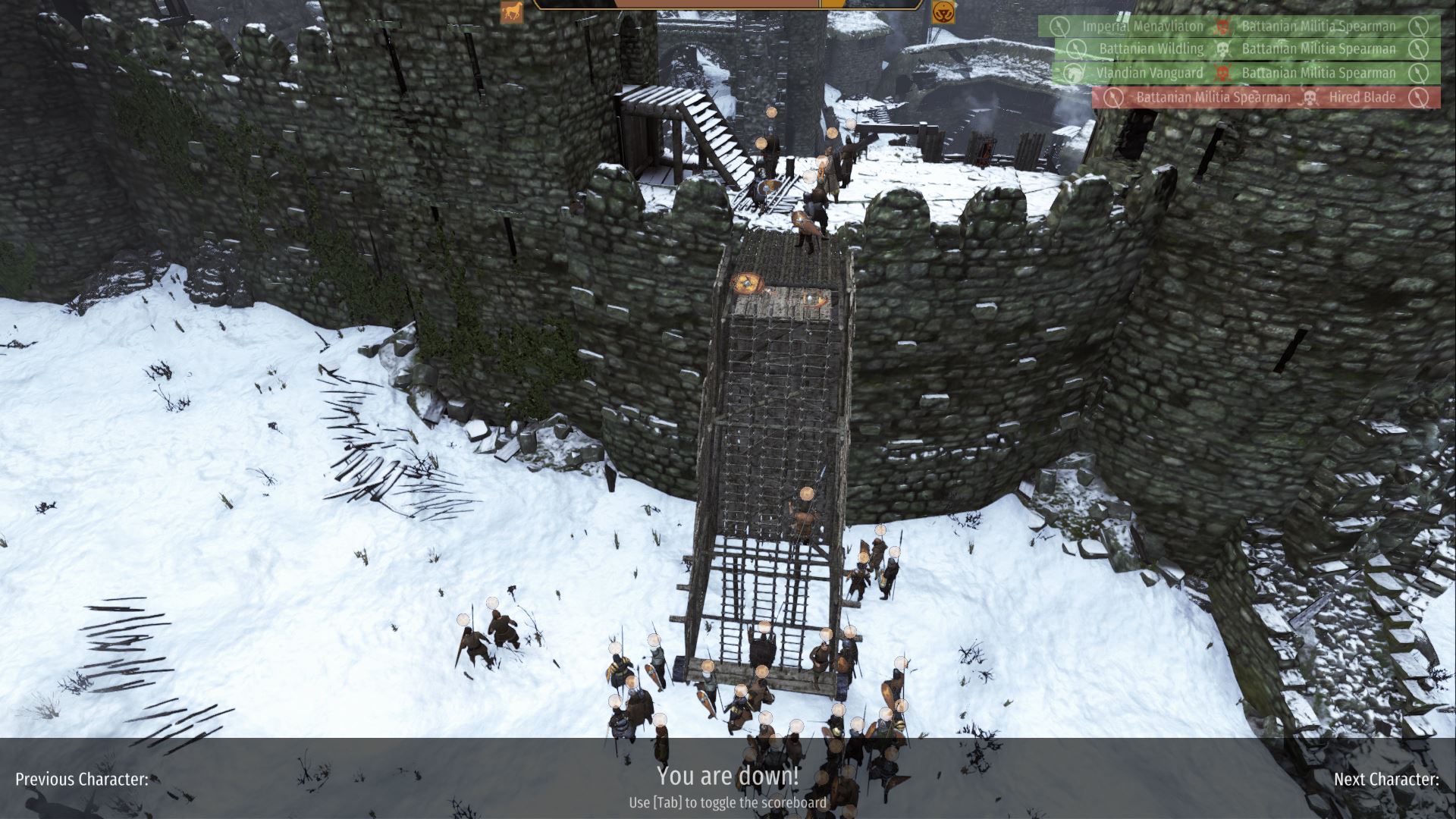 i must be one of the few that doesnt have many problems with sieges.

Pro tip, do not use siege towers until they are fixed. If you want to use ladders properly you will probably need AI module of RBM (my signature).
You must log in or register to reply here.