Herren er min hjælp​
Considered the ambiguous wording of our previous declaration concerning our alliance with the Nouvelle Entente, we want to state that Denmark joined them on a pure defensive basis. We signed this pact on the term that we will never join an offensive and unmotivated war, yet we forgot to publicly specify that we consider all offensive wars unmotivated, since peace can always be obtained and preserved through dialogue.

Foreign minister of the Kingdom of Denmark Erik Scavenius

The Kingdom of Romania would like to announce its annual military parade and celebrations on May 9th and 10th for Romanian Independence Day and "King's Day" respectively. We hold these celebrations to honor the Romanian struggle for an independent nation state, praise the great leadership of the Soldier King, Carol I, and to showcase to the Romanian people the brave men ready to defend the nation. Present in the parade will be elements from the Romanian Army, with special focus being given to the newly formed 1st Vanatori de Munte Division along with new changes to the Land Army. Preparations for the parade shall begin in earnest, and we would also like to invite the Kingdom of Serbia, the Tsardom of Bulgaria, the Principality of Montenegro, and the Kingdom of Greece as signs of good faith.

The Kingdom of Romania will have to decline the Belgian invitation to the Congo Conference. Some sort of plan or itinerary, or even a date, would make the safari idea more appealing. The King and his household are needed in Romania unless a pressing matter shall be discussed in the Congo.​

We would gladly accept your invitation and will personally attend it, and would like to request an officer uniform of this gallant new unit to be tailored for our Tsar, as he likes to wear foreign uniforms on occasions as these.

We would like to retract the above statement; unfortunately we won't attent this occasion, as our glorious Tsar doesn't like the uniforms of this unit.​

Congolese Safari​
His Majesty George of the Hellenes and His Government looks on with great approval of the Belgian initiative of inviting to an international safari in the Congo, and naturally a Greek delegation will attend headed by the artistically talented Prince Nicholas. Being an accomplished painter His Highness has expressed great interest in experiencing the wild continent of Africa and will undoubtedly put his talents to use in capturing the charm of the Congo with brush and canvas which supposedly fill up most of his luggage according to a local tabloid.​
Romanian Military Parade​
It is with great sadness that we must decline the Romanian invitation, although our representatives to the Romanian Kingdom are instructed to deliver our official gratulations on the anniversary of their independence, we fear the securing of transit for Greek military personnel to partake in the celebrations would prove too costly and inconvenient for us at this time.​
The Nouvelle Entente​
Though initially the news were received with some concern and surprise in Athens, especially as tensions seemed to rise between the new Alliance and Germany, even as we are certain this change in the balance of power in Europe will have far-reaching consequences in the future be they positive or negative the Greek people has no reason to greet the Entente or any of its members with anything but amiable friendship.​

"Miss me with that" proclaims King Carol

"Waffles waffles, weapons of waffle destruction something about Congo" -probably the King of Belgium 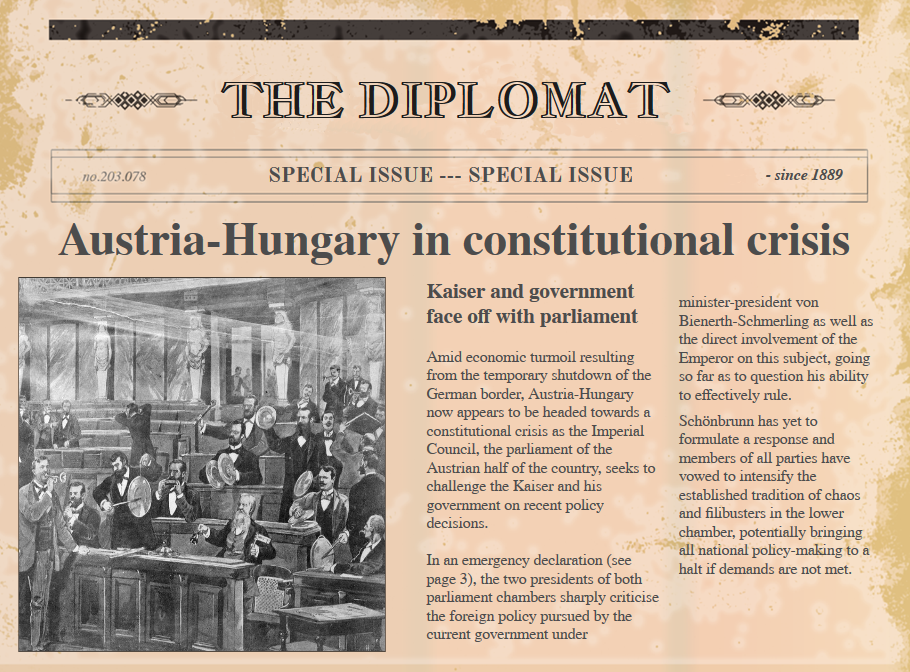 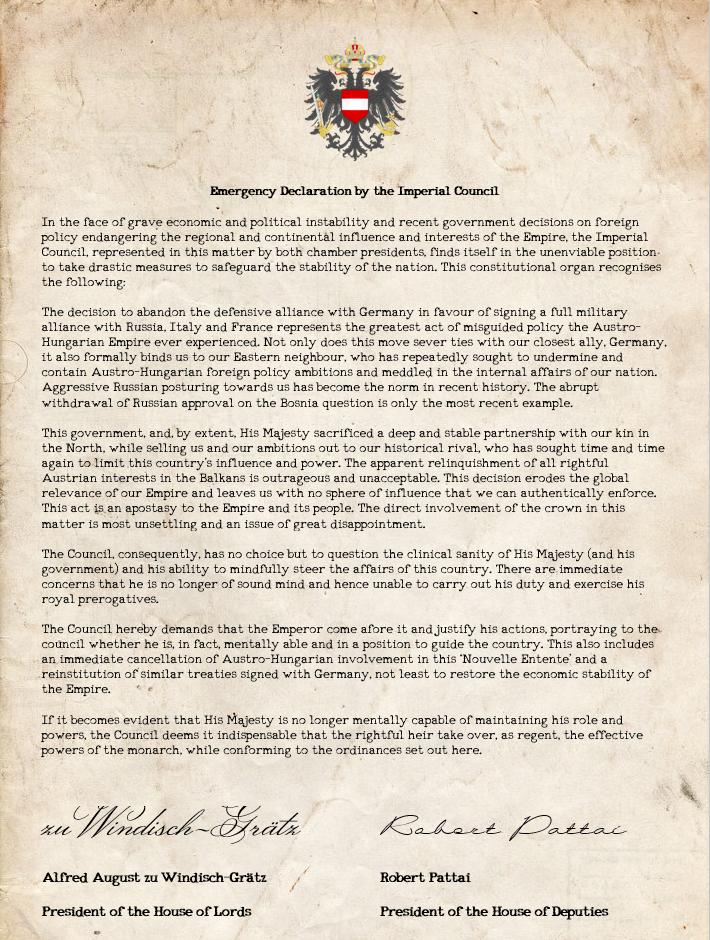 This is not an update and the game is still locked for processing, this is merely a small notification about an on-going event, the further happenings of which will be detailed in the actual update​

An old BoP tradition lives on

Give allied Armys commands as a kingdom ruler!

Thursday at 4:39 PM
Jones1301
Everything is ruined by shortcuts and poor planning
2 3