Arni is awarded a default win in the final due to maximous refusal to play before the deadline. Thread and bracket will be updated later

_Osiris_ said:
Arni is awarded a default win in the final due to maximous refusal to play before the deadline. Thread and bracket will be updated later
Click to expand...

This is a complete disaster tbh unfair decision, Osiris even yourself you were not answering me on Steam Wednesday, when i was explaining to you the reason why i couldn't play, even Arni delayed
duels he never had problems with it, how many past tournaments have been were they were endless expectations. For this one it's only two days of delaying and i said it to Osiris and you Arni on Steam before this. Furthermore, he knew very well that he was going to get ****ed up and that he spent his time asking Osiris for the default win.
I will be there tomorrow, and again tomorrow, free for Arni to continue to hide behind his default.
Not to forget that i beaten you 17-13.
I was even ready way before this deadline, but again Arni rejected fighting me
Also as a fact you wrote " there is no deadline for semi final" in the tournament rules, but you said nothing about it for the finals.

Maximou said:
I was even ready way before this deadline, but again Arni rejected fighting me
Click to expand... 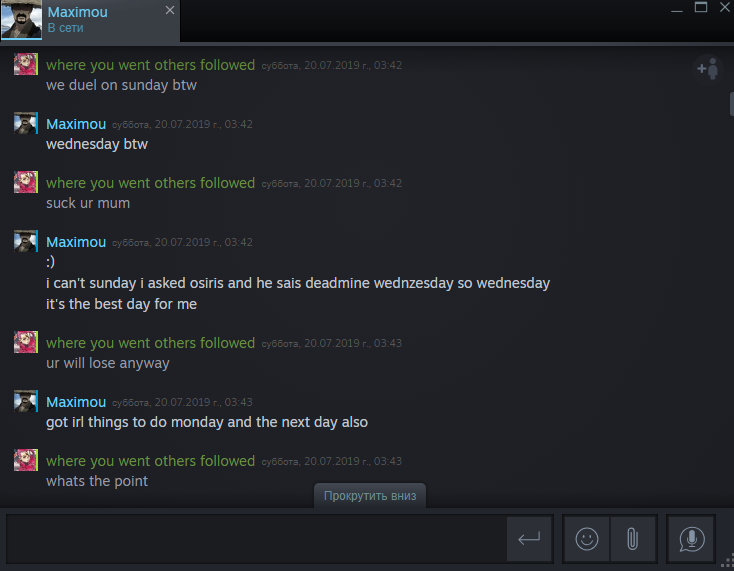 don't see how you were "ready way before this deadline" since you rejected to play earlier on sunday, claimed ur got "IRL THINGS TO DO" on monday and tuesday, then insisted on wednesday to be our duel day.

That's a shame. I was looking forward to watch their fight

Varney said:
That's a shame. I was looking forward to watch their fight
Click to expand...

Yes we are all ashamed by Arni being scared to lost two times in a row against me, we'll see in another tournament if we came up against each others.

apologies for the lack of updates to the top 4 but my internet has been down for a couple of days.


The prize money can be handed out via paypal or direct transfer.

Please send me a PM from the forum account you signed up with with your details (not accepting anything over steam to prevent some idiot trying to pretend to be one of you and wasting all of our time.

Thanks for hosting dude

Arni Maximou ****show on finals
You must log in or register to reply here.