genrev0914 said:
f we are limited with 16 crafting pieces, is it fine to make something like 3 types of weapon for different culture, for example 1 for empire, 1 for vlandia and 1 for sturgia, or are we limited for 1 culture of our choice?
Click to expand...

Well, we didn't state anywhere that the set needs to be for the same culture. But you should think about the consequences of doing completely different weapons, given this rule:
We may also take it into account when evaluating the Visuals of your submission as a whole.

genrev0914 said:
Are we not allowed to use on modding tool a native material such as weapon_crafting.mat material for our blade metal?
Click to expand...

Not allowed. You should create your own material.

Created weapons: Wolf Of The East (2h, Khuzait), Order Of The South (2h, Aserai), Might Of The North (2h, Sturgian), Legend Of The West (2h, Vlandian)

Work-in-progress screenshots [at least 3]: Idea behind the weapon set is to have craftable 2h swords for four different cultures of the world of Bannerlord. Screenshots are all from the Blender viewport. They have only material colors, so no textures yet.

Wolf Of The East: This is a Khuzait 2h sword inspired from Turkic Kilich. Blade starts with a inverse curve but towards the tip, it takes traditional curve of a Kilich with tip sharpened on both sides(top and bottom). Guard is designed to look a bit like a claw slash. Grip is a weaved leather strips continueing the curve of the sword towards to the pommel. Pommel is what gives the sword it's name; a wolf's head. 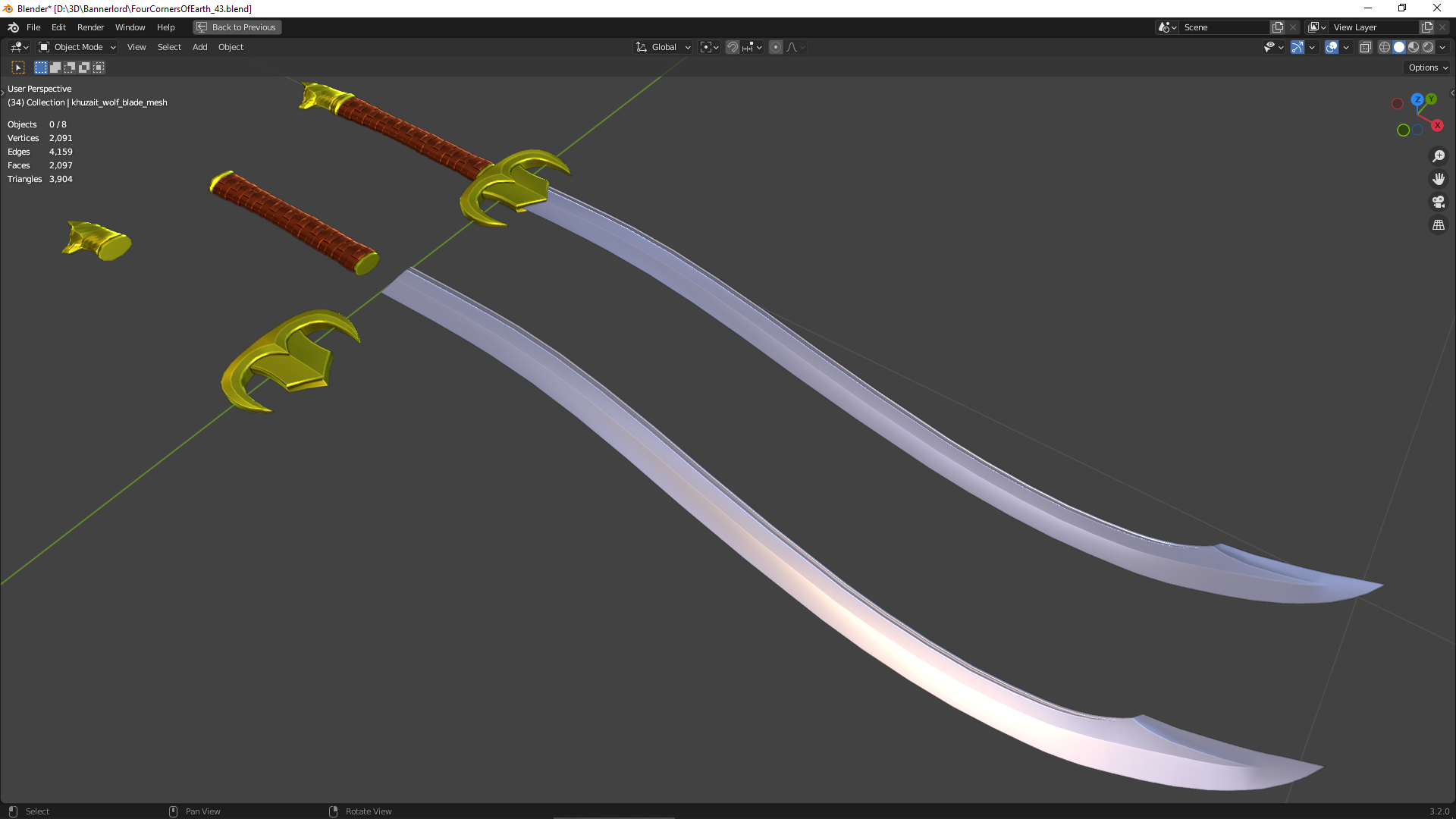 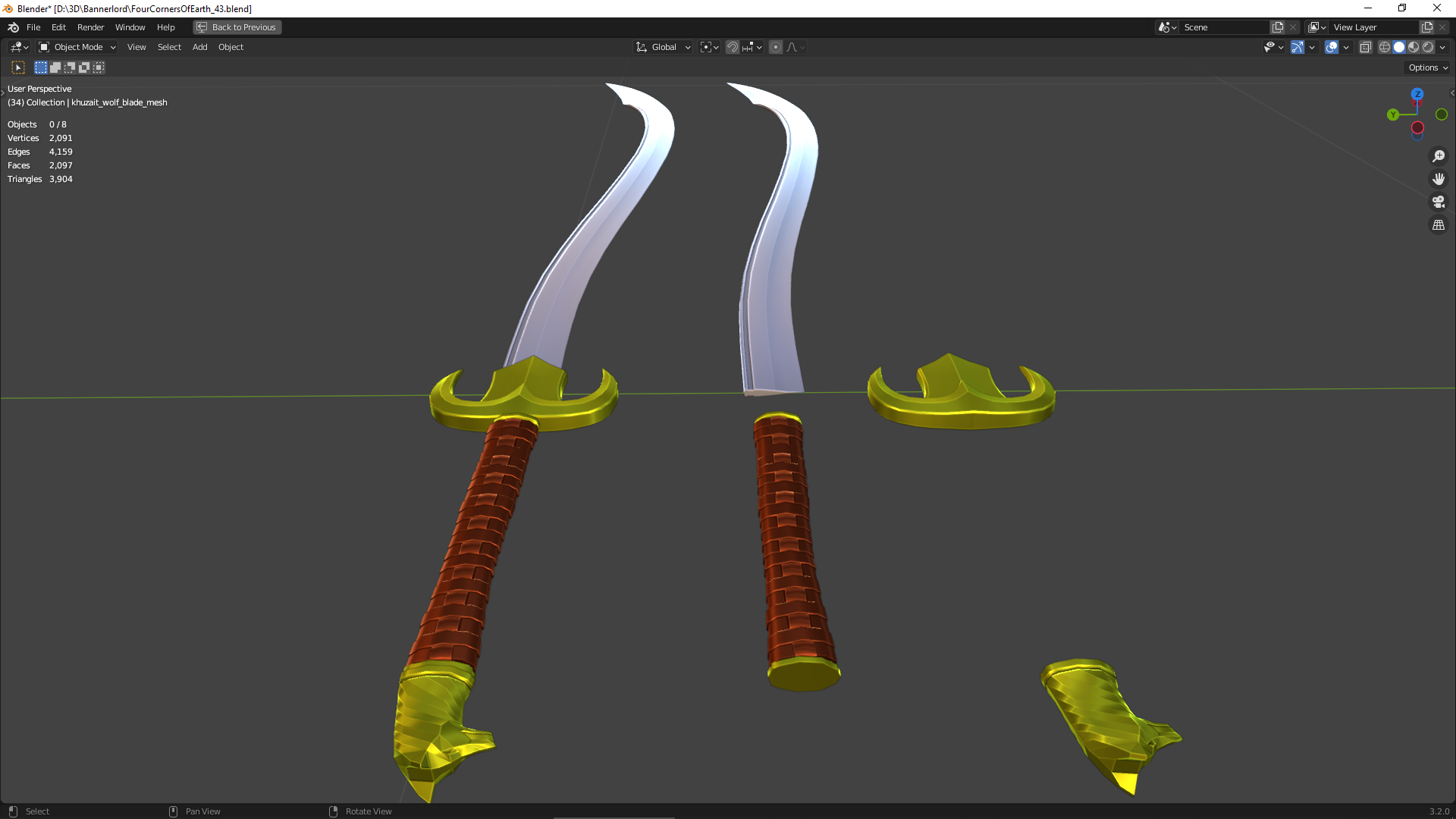 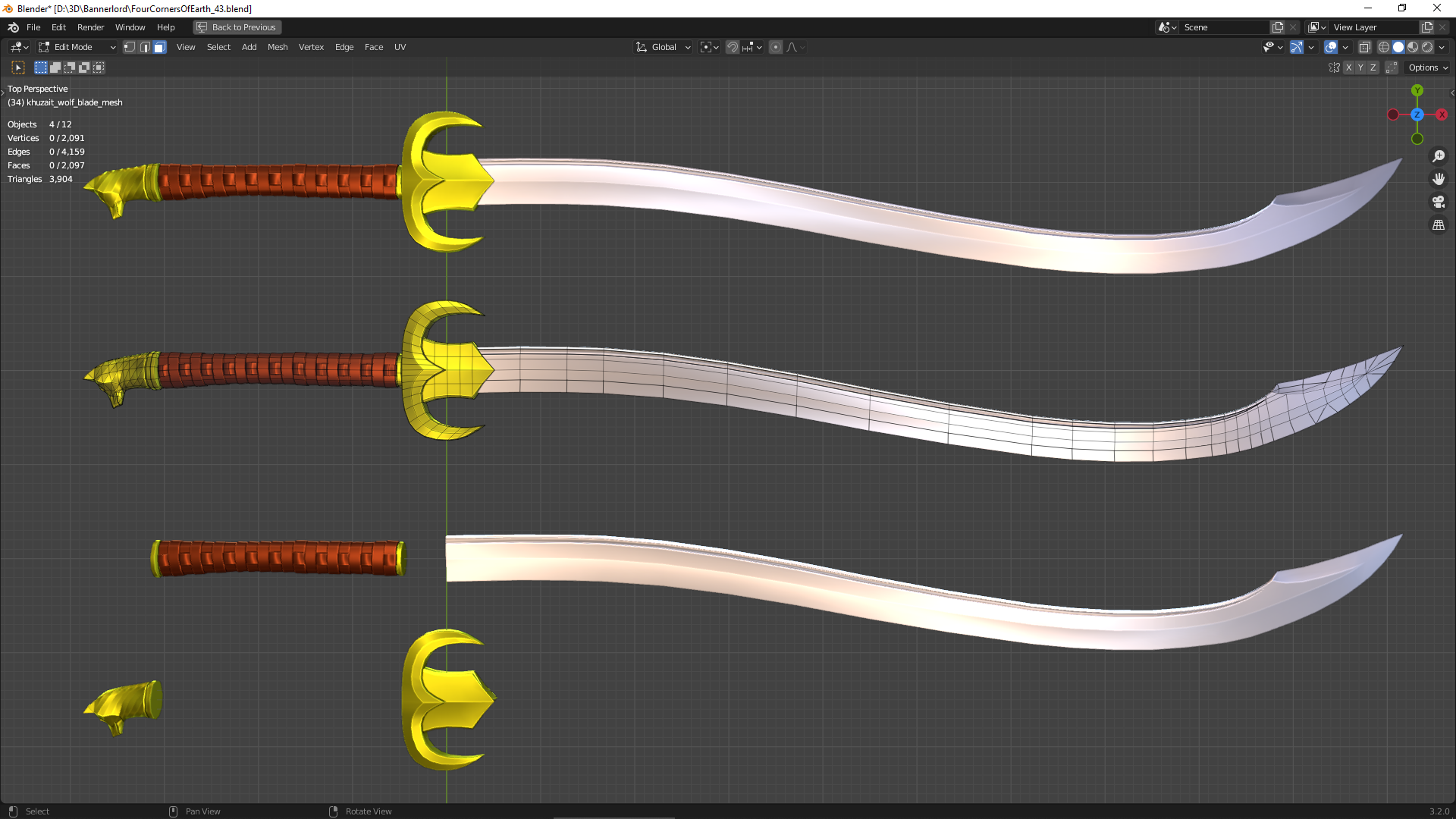 -------------------------
Order Of The South: This one's "inspired" from the famous 2 tipped sword named Zulfiqar, the sword of the Hz. Ali. Blade is a straight sword (actual Arabian swords at that time were all straight, can check Topkapı Palace Museum) with splitted tip and a waved design. Guard is following that splitted shapes to fit the theme of the sword. Grip has a metal center part holding 2 wooden parts together. And the pommel ends with jewelry on it. 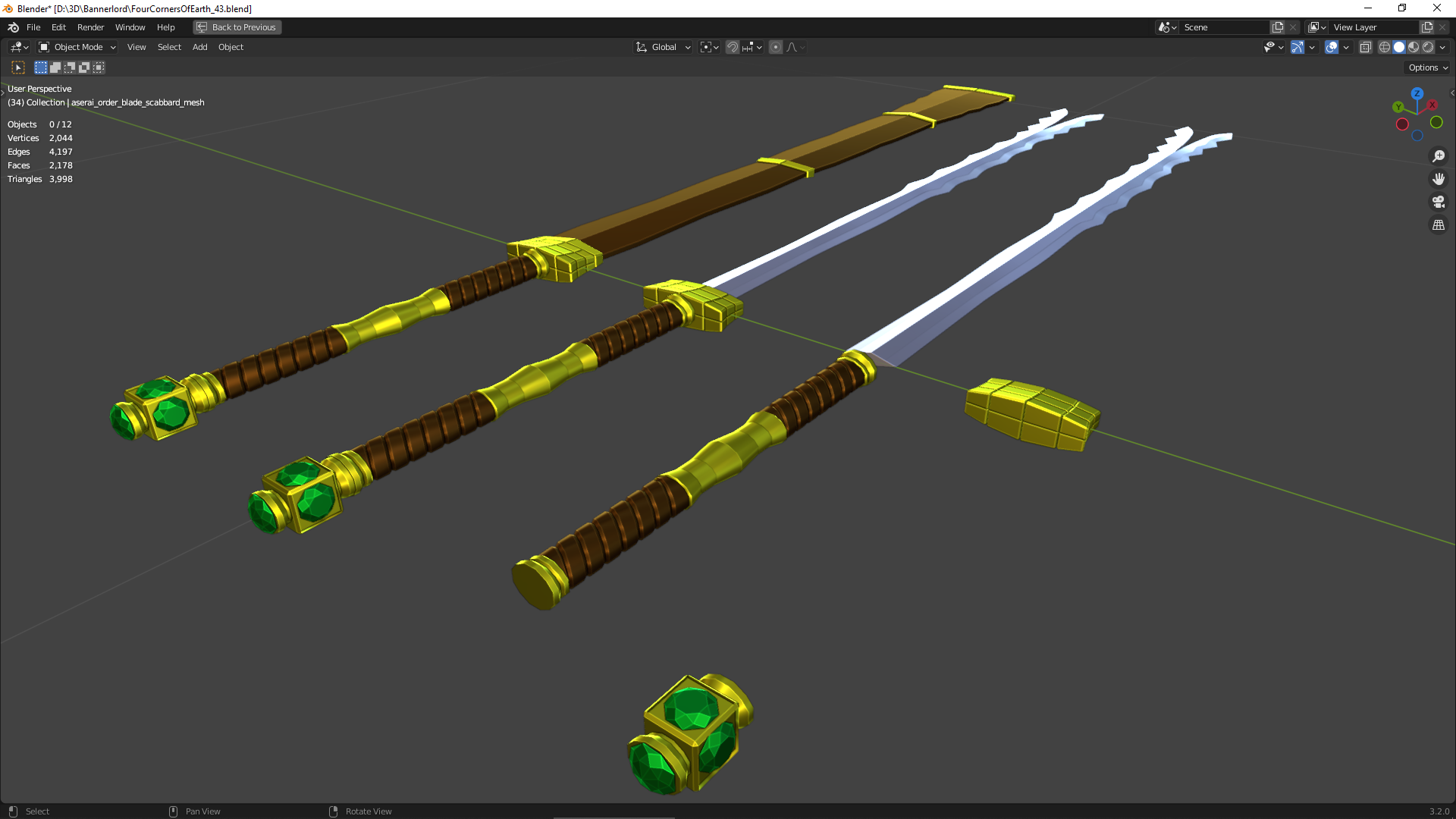 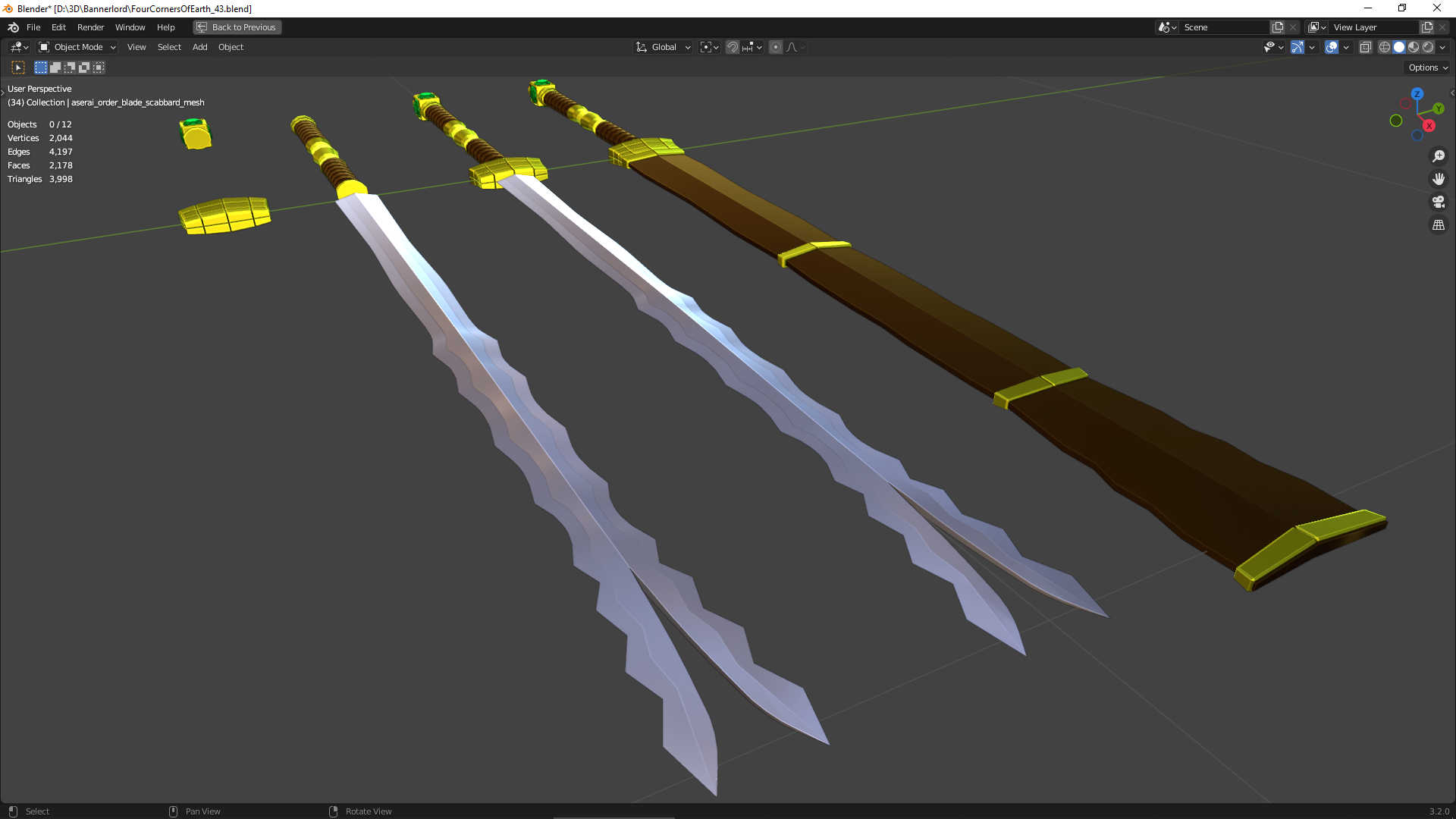 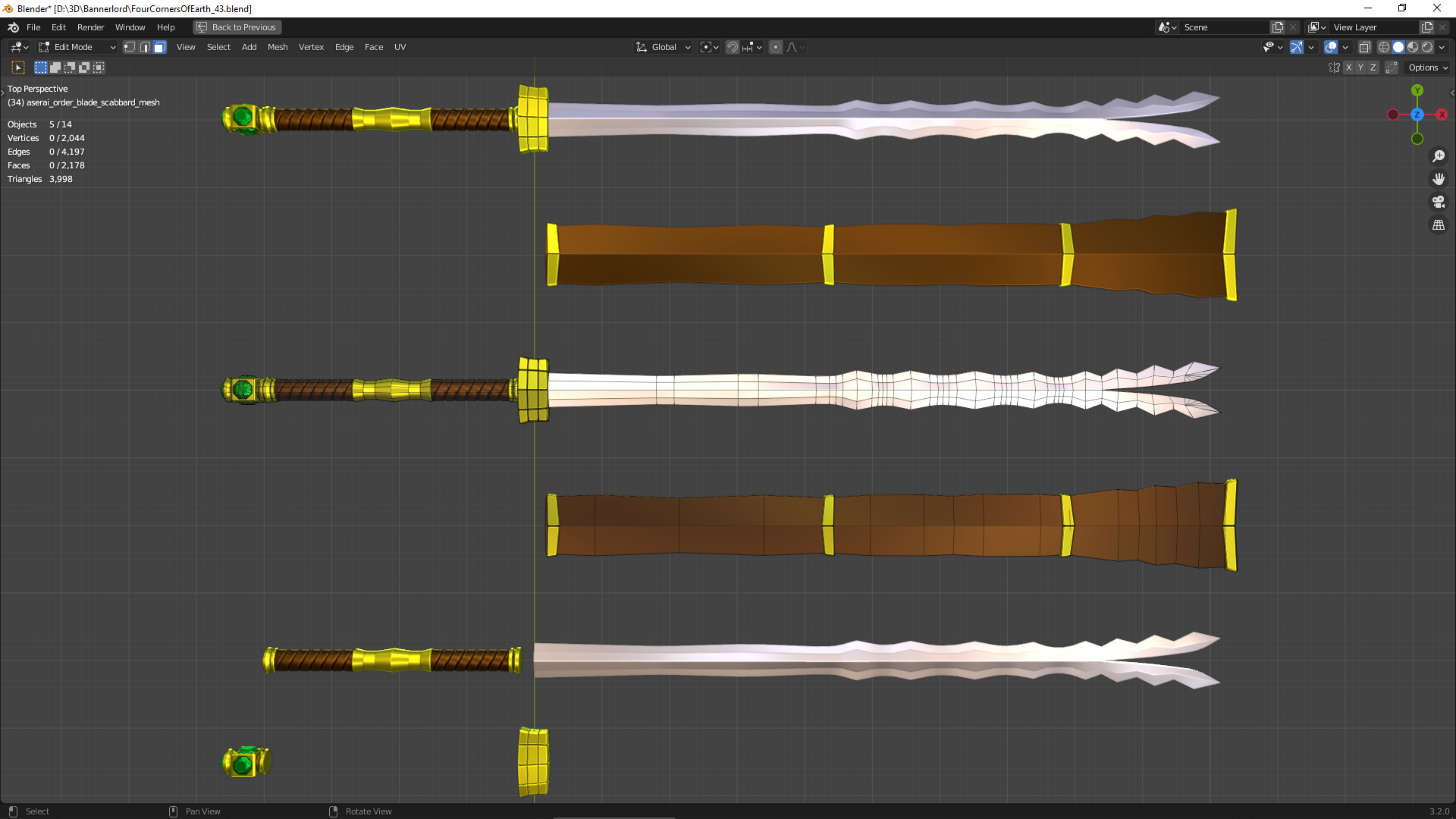 -------------------------
Might Of The North: Blade is inspired from Viking Seax, an actual short sword. I just thought it'd be awesome to have that blade shape as a big 2hander . If you look carefully on the guard and the grip; together they look like the Mjolnir. So in a way, when using this sword (or those 2 pieces together) you will be holding the hammer of the Thor . Pommel just follows the design of the middle round part of the grip to fit the whole theme. 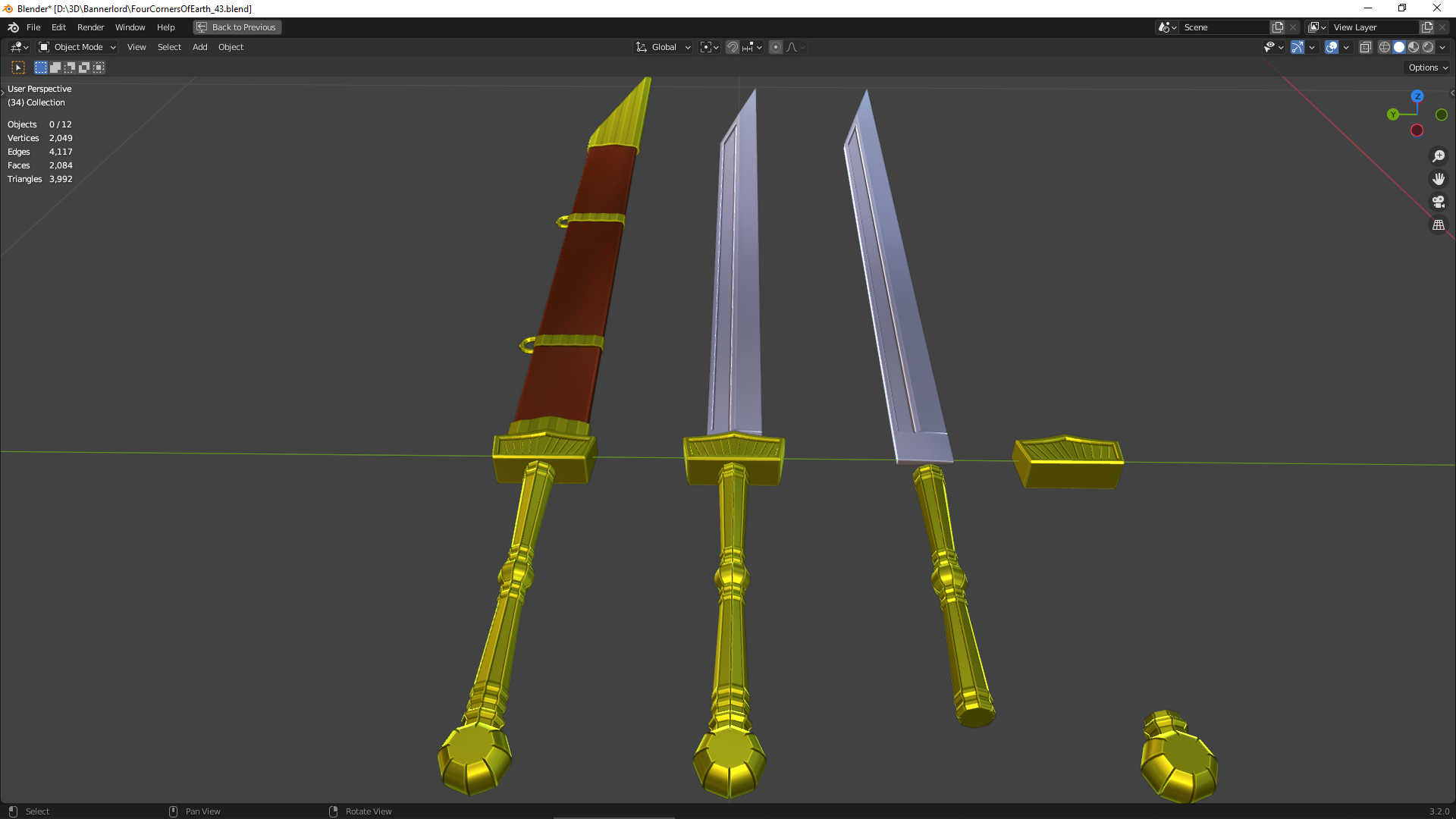 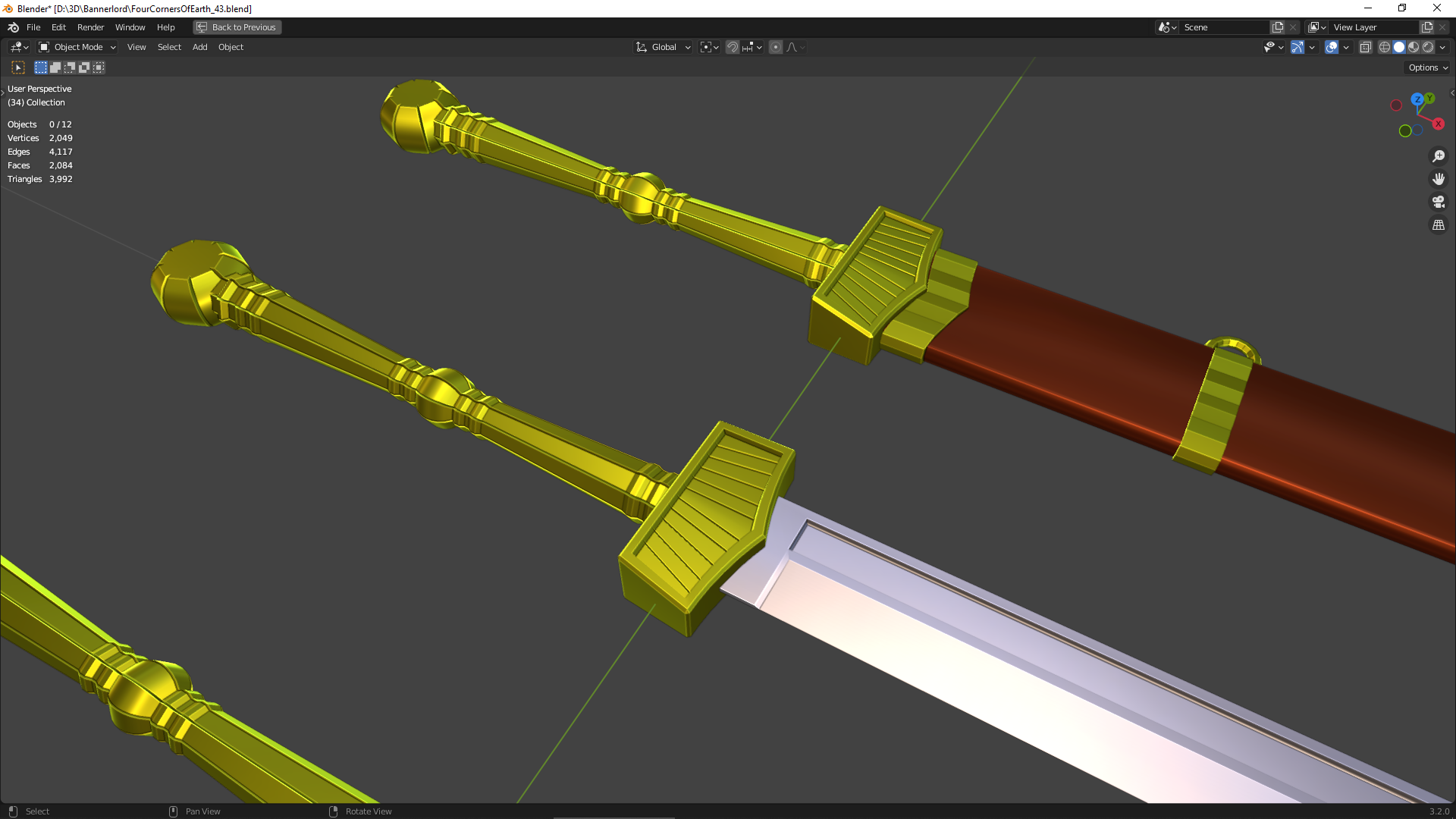 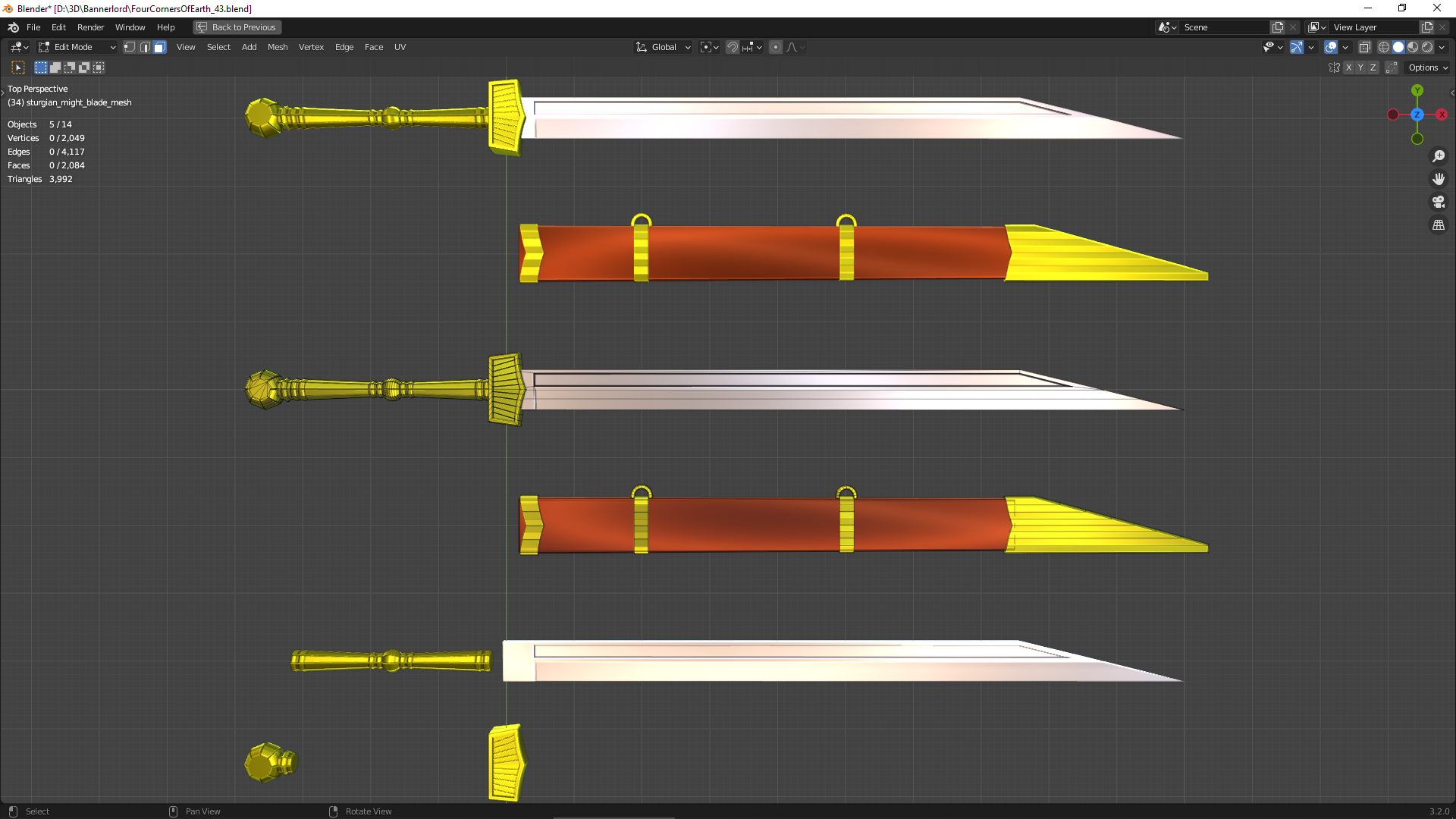 -------------------------
Legend Of The West: Idea behind this sword was to make something similar to legendary Caliburn. After searching about the sword i find out that it should somehow look like inbetween Celtic and Roman designs unlike the fabled designs everyone knows. At the end i decided to model my own version of it, being more fit to the Vlandian theme. For the blade i inspired from one of my favourite blade designs; Danish greatsword's blade shape. But made it wider so it'd be more suitable for the period of the game (as piercing/thinner designs came in later centuries). For the guard i started with a triangle shape and ended up with what i have here to have something suitable for the start of the blade (thin, unsharpened). Grip is traditional leather wrap with cross wrapped leather splits on it. Pommel is again going with the triangle shape of the guard. 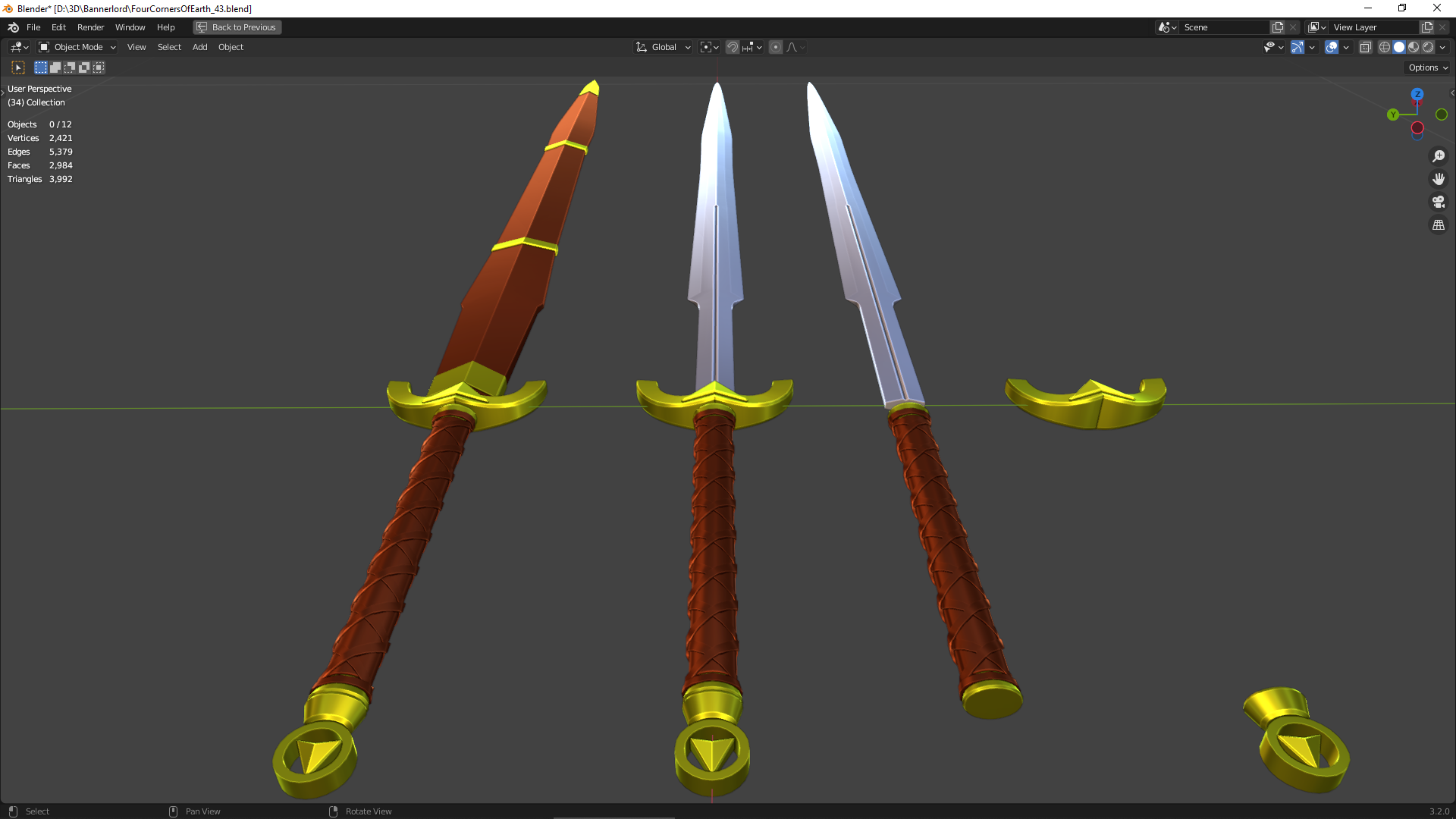 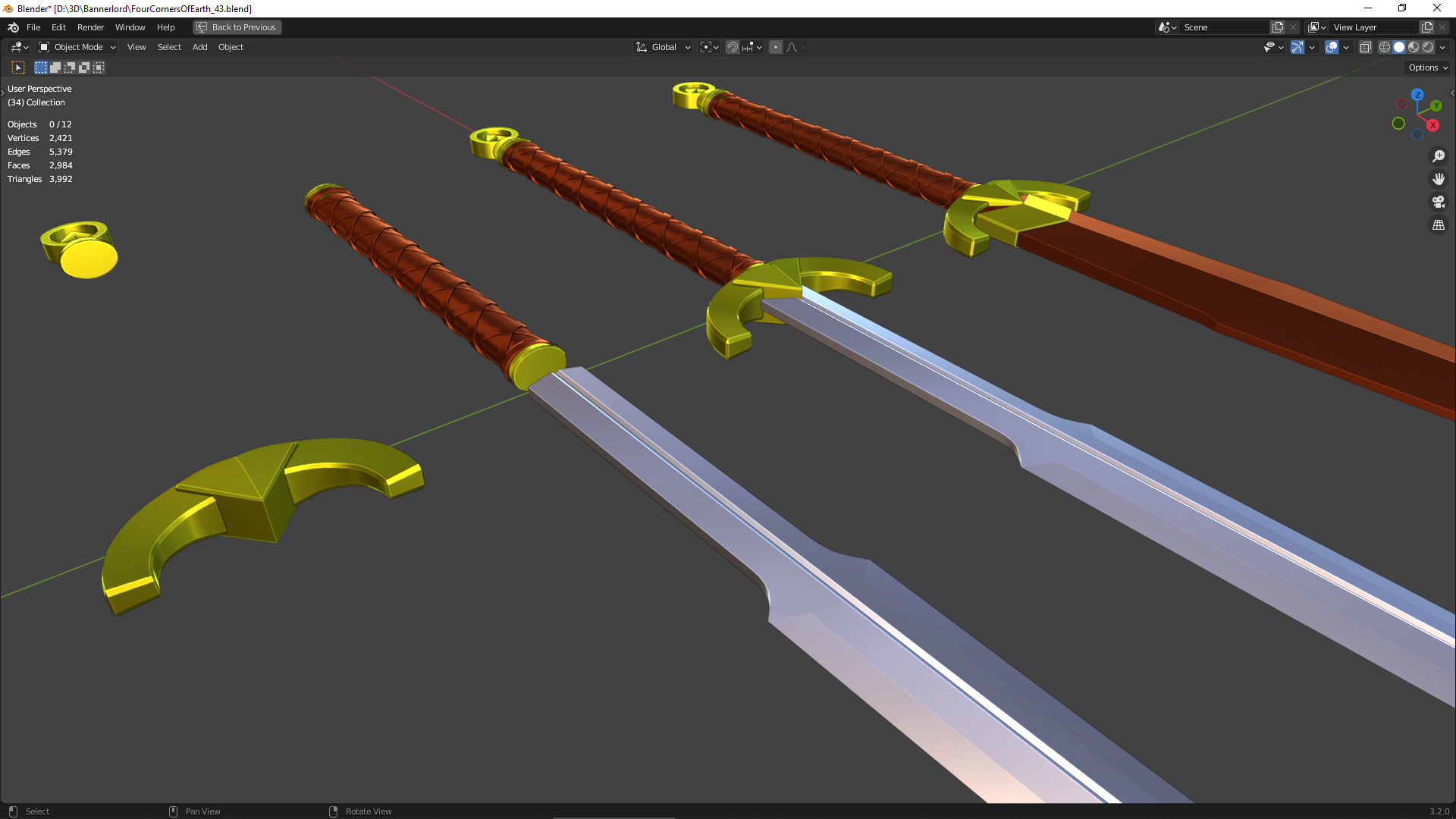 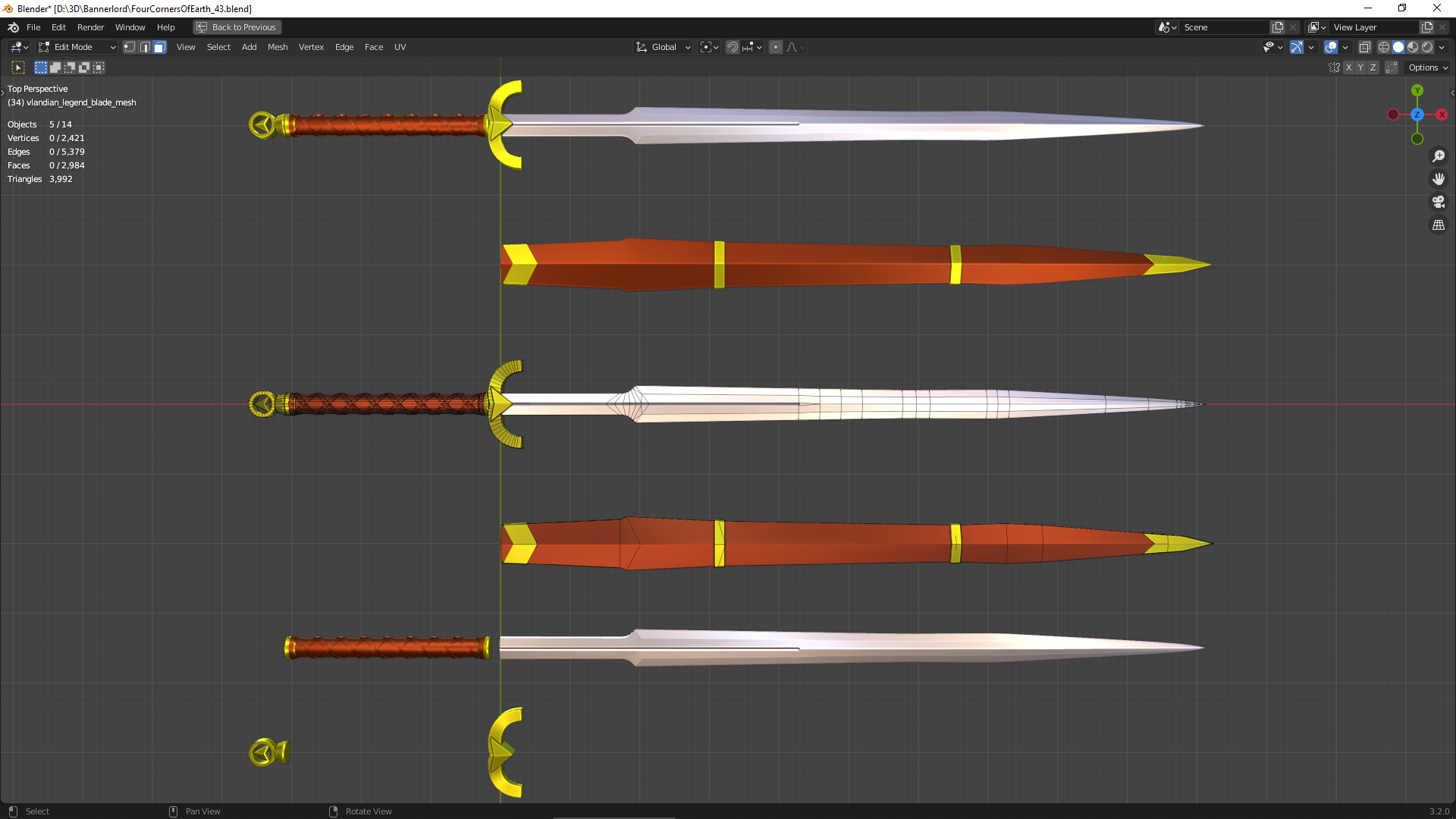 -------------------------
Note 1: For Scabbards; i used what extra polycounts left from each sword's 4k tris-limit to model them, couldn't even have enough polycount to make one for the Khuzait sword. So shapes and designs are not as good and detailed as i wanted, but i think they'll do the job

Note 2: You can see poly counts of each sword on the top left side of the screenshots. Look for the "triangles"

Now, only the meshes/modeling is done. Soon i hope to start UV-unwrapping and then texturing them in Substance Designer, will update this post when i have more things done. Thanks for checking and reading

1- I know Bannerlord is using PBR textures, but is it metallic or glossiness way? To put it simply, i know what diffuse and normal maps are; but what this specular map actually is? Is it glossiness map, or some kind of merged maskes group stored in RGB channels? My question is how can i convert my traditional Albedo/Diffuse & Normal map & Metallic and Roughness maps into this Diffuse/Normal/Specular maps? Just need some infos about how engine reads textures/materials.

2- I figured for collision Bannerlord uses something named "bo_xxx", might be wrong though. How should i create my collision meshes for weapons? Like having "bo_khuzait_wolf_grip_mesh" named collision mesh modeled and exported with actual mesh can work directly? Or should i set those collision shapes in a different way? Would be wonderful to have some instructions showing the correct way to create collision meshes for craftable pieces. Thanks in advance.
Last edited: Tuesday at 10:55 PM 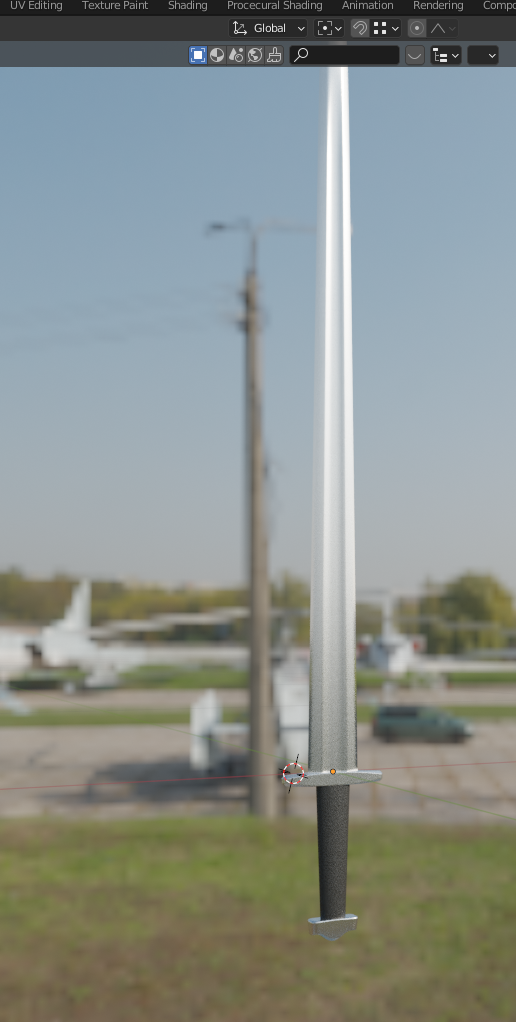 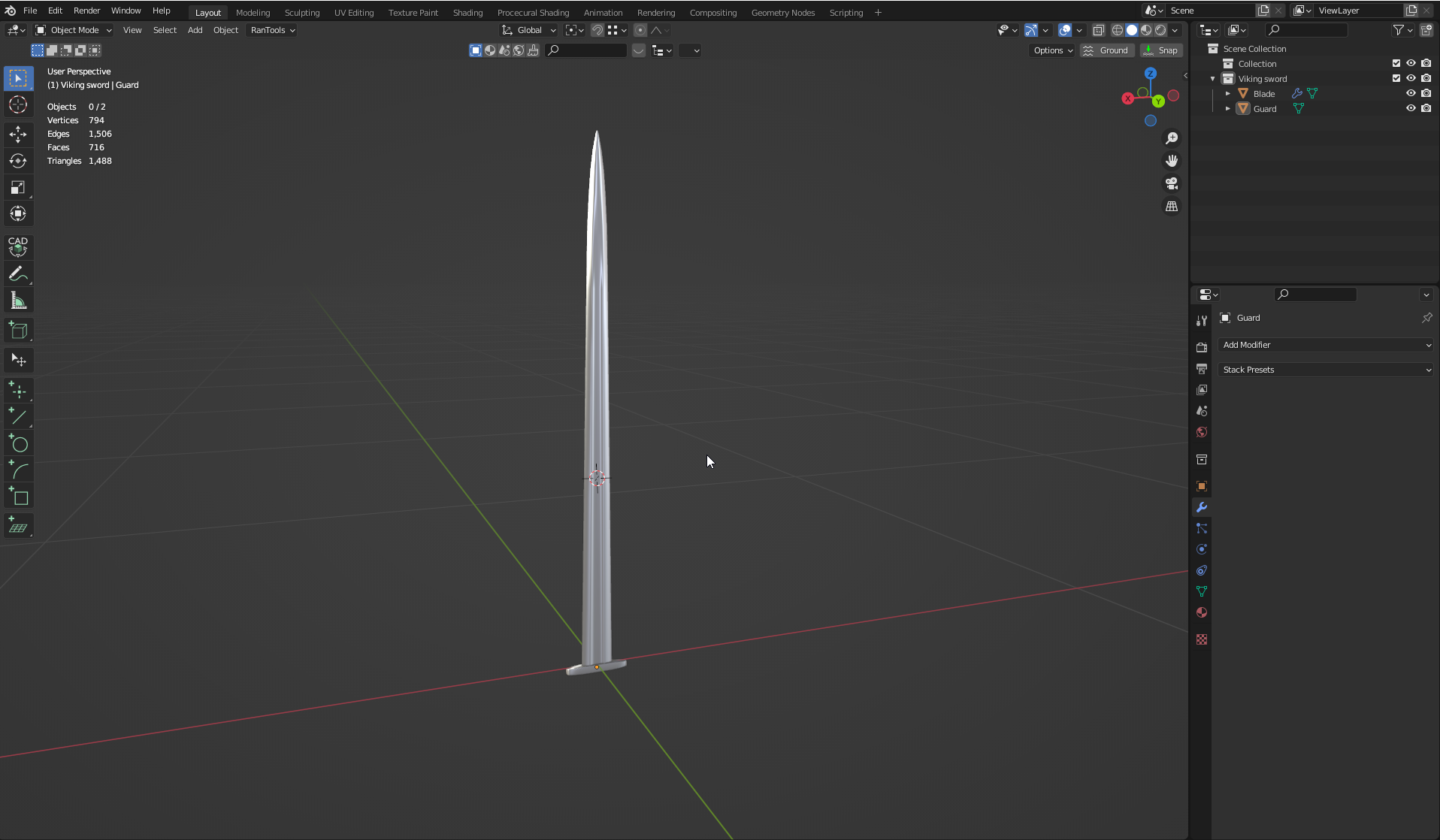 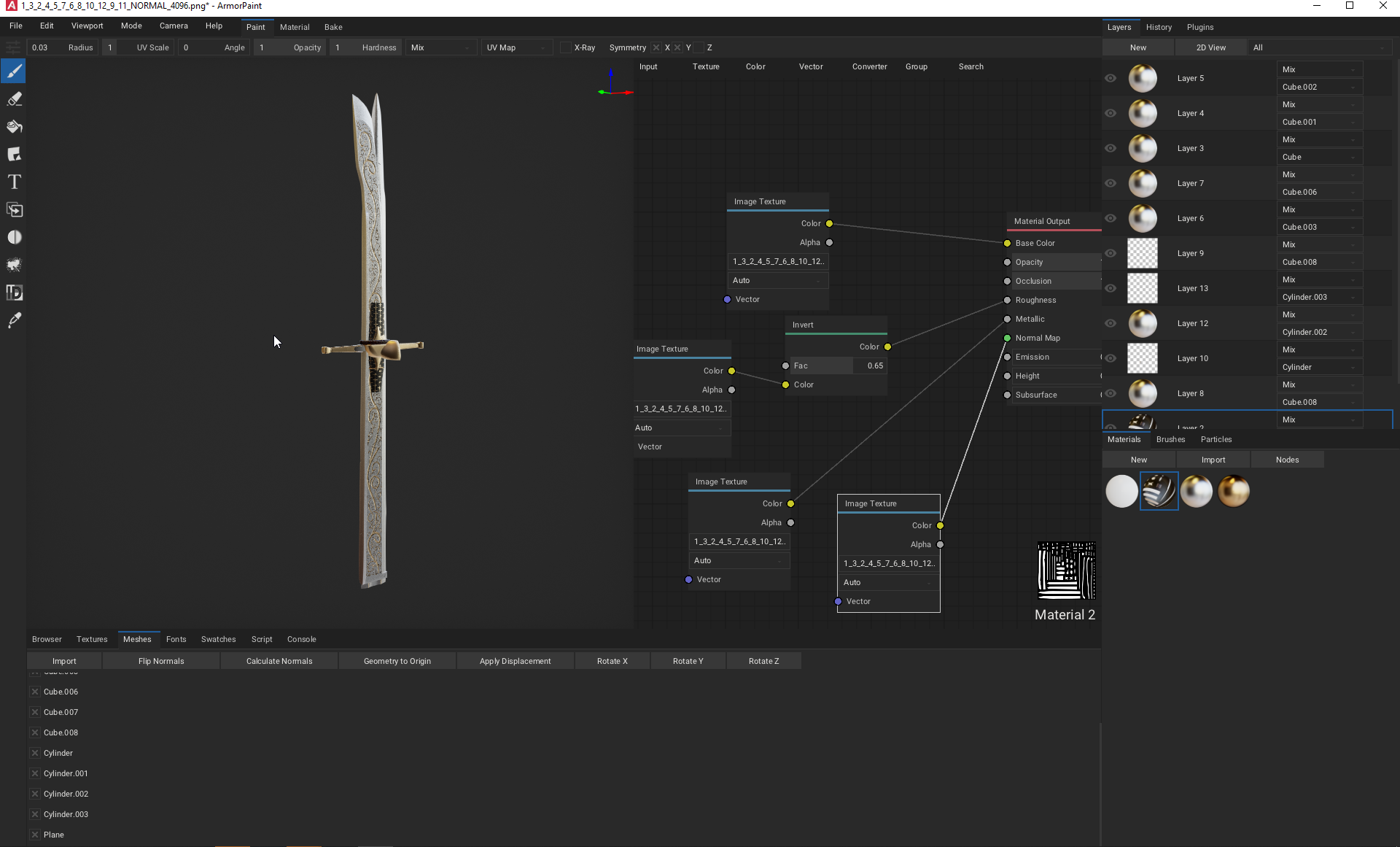 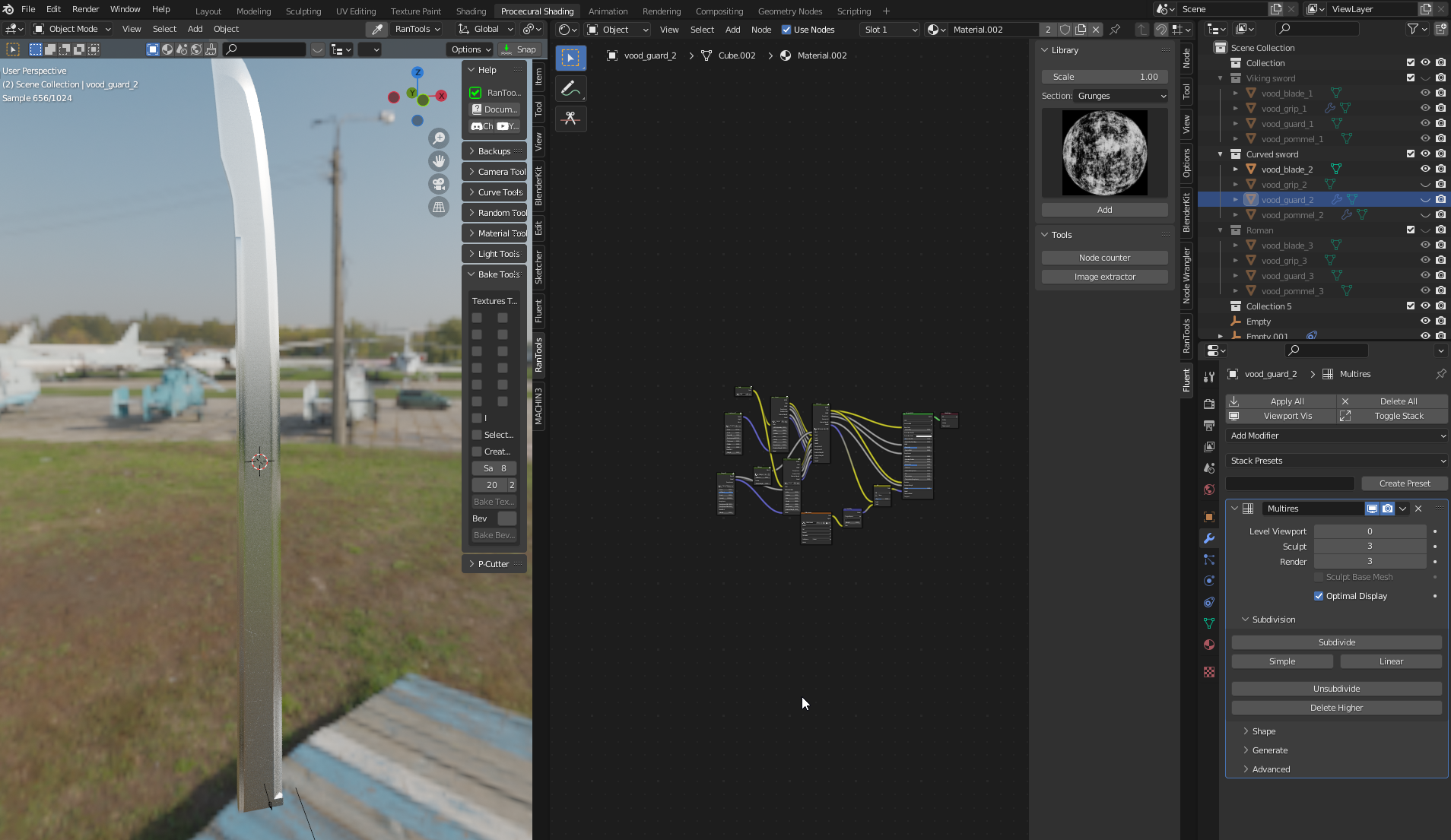 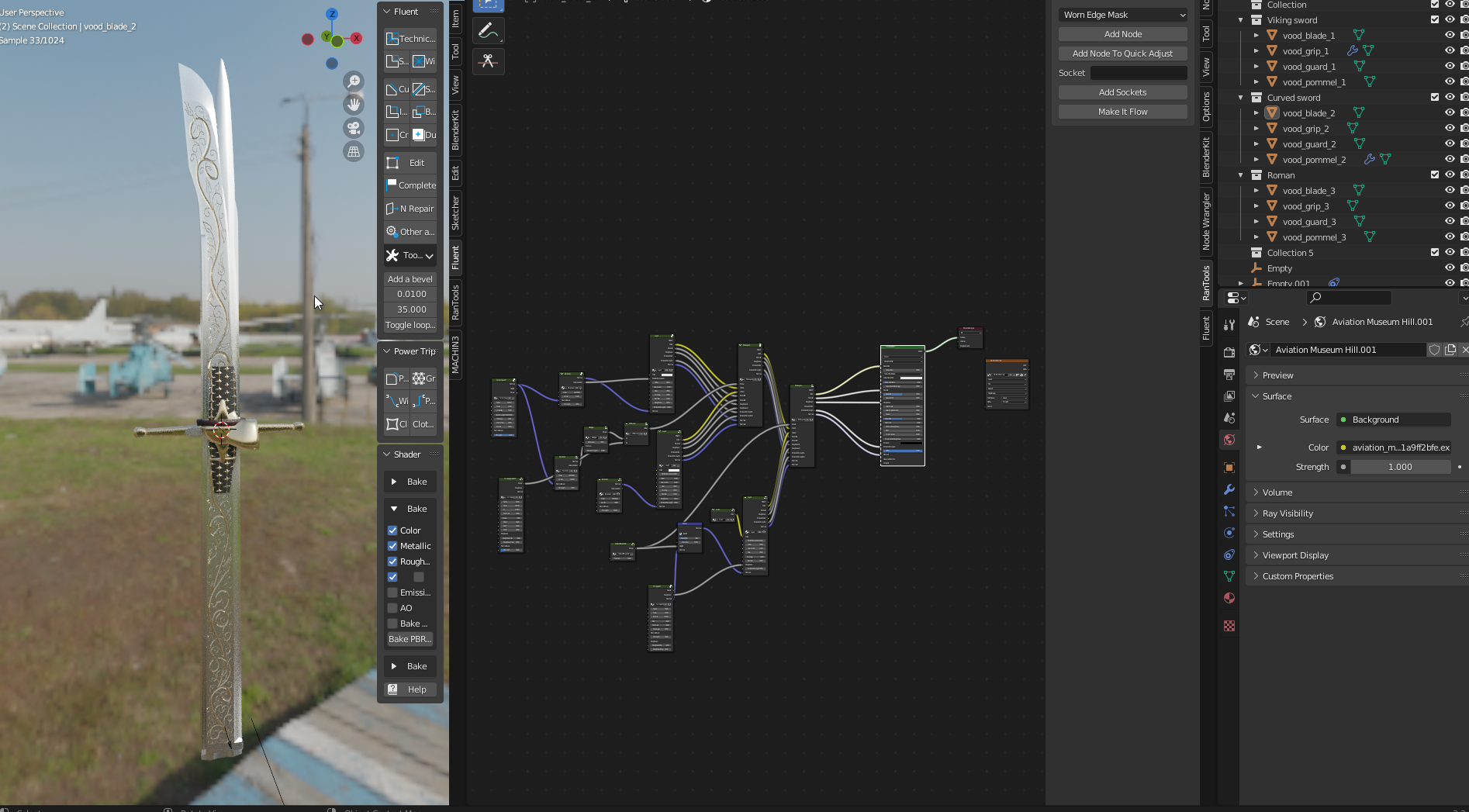 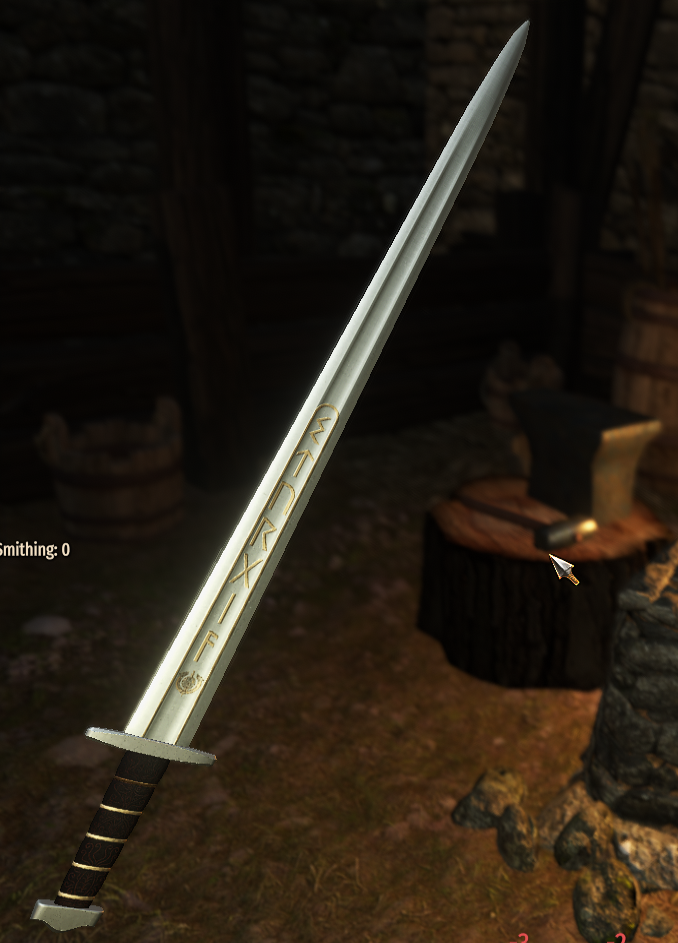 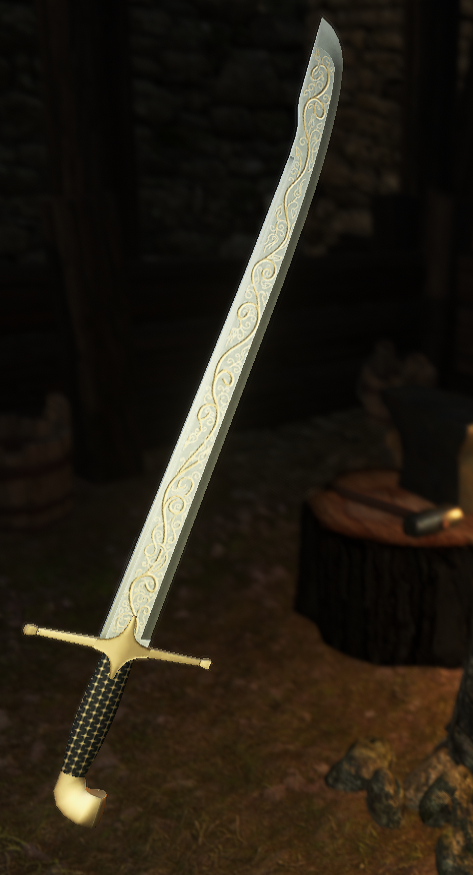 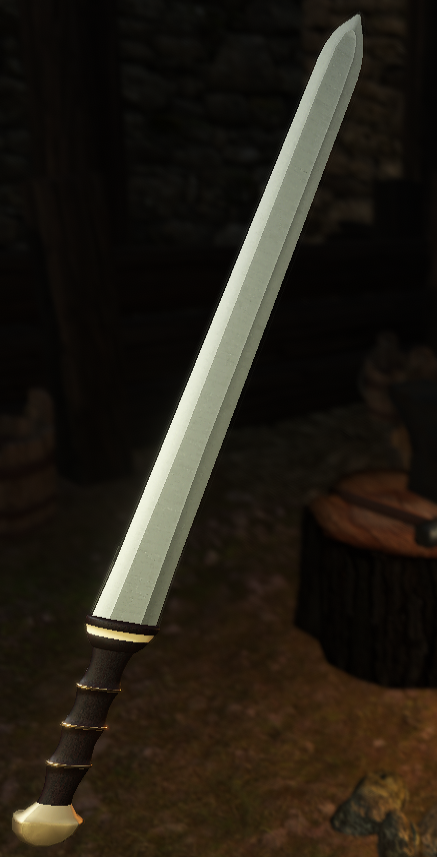