The 17th (Prince's Own) English Lancers, known informally just as the "17th Lancers", are a casual cavalry regiment with no requirements or obligations for our members: we understand you're an individual and we want you to have fun!
Therefore, whilst we do have trainings and events, all are optional, and there will be no punishments for any failure to attend.
Officially, we are a Russia-based faction, though we are English-speaking and have a sizeable minority of Spanish-speakers in our close community.​

In 1801, Prince Florian, an inhabitant of Russia (though not native to that Empire), raised the 17th (Prince's Own) English Lancers, hoping to make his own mark on the world during the Napoleonic Wars. Originally, the regiment was formed exclusively of English gentlemen, however as the tides of the Napoleonic Wars turned, and the pestilence of conflict spread through both Russia and Spain, a contigent of Spanish gentlemen were sent to bolster the Regiment's size and strength. Soon after, several skilled Polish lancers, disaffected by Bonaparte's failure to reunite Poland, also joined the regiment, perhaps believing their chances of unification and independence would increase should the Russian Empire find victory in the Wars.
The Regiment itself has never found itself tasting ignominy or defeat... but the Napoleonic Wars are changing once again, and the 17th Lancers need as many brave men as possible to fight the numerous battles that Providence designates it shall fight.​ 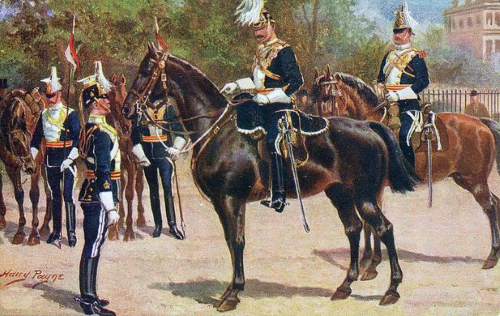 A parade of the 17th Lancers​

There are few rules within the 17th Lancers - our primary goal is to have fun, and our rules are designed to maximise this.
1.Respect one another despite rank. Friendly banter between one another is acceptable and encouraged, but if a member feels it is taken too far, please respect them and stop.
2.Obey the orders of your superior officers and NCOs. It won't be often that they are giving orders, so when they do, be decent and follow them
3.In the Discord "Battle" voice chat, refrain from talking over officers and NCOs if they're giving commands.
4.No discussion of the England football team on any 17th server or forum unless you are praising the players

Even though the 17th are a casual regiment, we still have a hierarchy of rank. Rank does not denote experience but instead how competent someone is for a certain role.
The Commissioned Officers are those who run the regiment itself. This involves administrative work and administering orders to the NCOs. If you have any issues, the COs are the ones to contact - primarily the Colonel, PrinceFlorian.
The Non-Commissioned Officers take their orders directly from the Commissioned Officers and ensure that they are enacted. This can range from liasing with other regiments to instilling discipline during battles.
The Enlisted Ranks are the meat of the Regiment. Unlike many other regiments, we do not give enlisted ranks based on experience; instead, we award medals. New recruits begin as Troopers, and if they prove themselves to be competent leaders who fit in with the ethos of the Regiment, then they are sure to find themselves promoted to Corporal soon.

Ready to don your czapska and couch your lance? We're enlisting troopers of all nationalities. Once you've joined, there's no requirements for you to show up to our trainings or events as they're all optional - you're welcome to join just to meet our wonderful community!


Alternatively, you can just join our Discord, the first place we post all our events and news, and where we rally for battles and voice chats.
https://discord.gg/aH6krxC
​
You must log in or register to reply here.