In Progress Troops stuck and don't operate siege weapons after they "retreat to safety".

Summary:My troops had taken some casualties and start retreating, even if the morale is above 60, don't know why. Then the new troops spawned, and stand besides the siege towers. but not one operate them. They just stand there being shot.
How to Reproduce: Try custom battle following the video below.
Have you used cheats and if so which:
Scene Name (if related):
Media (Screenshots & Video): 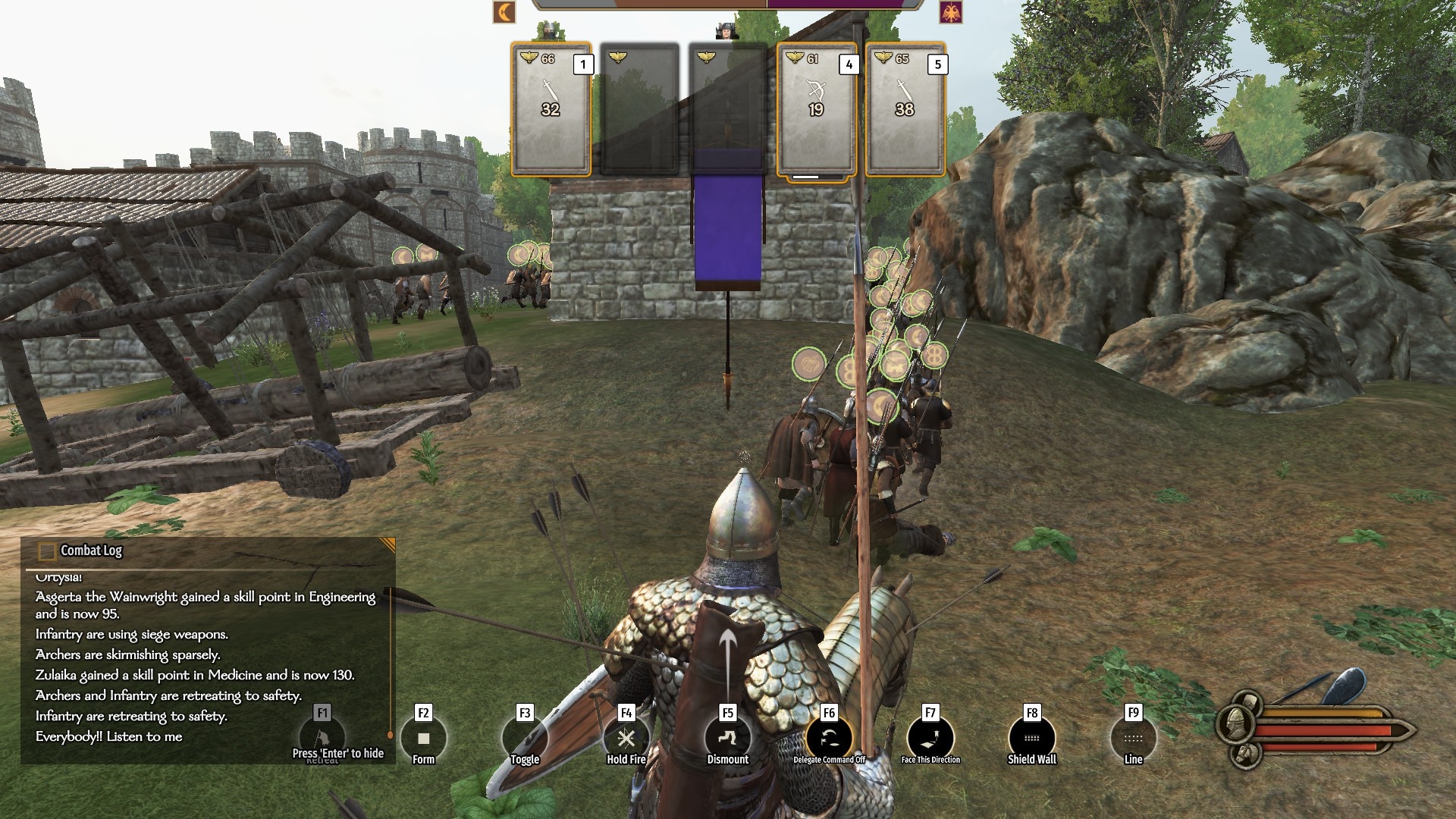 It is most definetly not fixed. It just occured twice in row for me.

If i were in an army that lost 300 men without doing one single casualty to the enemy - I'd abandon you, too!

I'm interested in how you got those info panels that look like playing cards to come up. I've never seen them before.

TechnoSarge said:
If i were in an army that lost 300 men without doing one single casualty to the enemy - I'd abandon you, too!

I'm interested in how you got those info panels that look like playing cards to come up. I've never seen them before.

How about if you lost 33 men of 580 and the enemy lost 8 of 260 in the first 90 seconds of the fight? I mean its logical that the killing for the attacking side starts when you are on the wall and not when you are pushing your siege engines to the wall. Please refrain from further unhelpful comments. If you would have taken the time to read the original summary, you would have seen that it is not about the retreating but that the new troops do not operate the siege engines. Please read and think before you write.
What Info panels that look like playing cards?
Last edited: Jul 16, 2022

Sorry for the wrong fixed message. My bad! The issue is still under investigation.

@ImmanuelKante Sorry for the tone of the post. It was really aimed at the original poster (a name whose characters I can't replicate!) I was very surprised to see a battle totally between bottom tier and top tier troops; boy, did the Recruits get murdered. To me, the reinforcements went to the place the OP ordered them at 4:18. Then he tried to have them occupy the space where the ram was, several times, but the game didn't allow it ("forbidden" icon on the flag) because they couldn't stand in formation there.

I have faced this before. My best response is to F1-F3, "Charge!" Unfortunately, that generally makes the men leave an engine that hasn't completed its work (breaching the door, or surmounting the wall) and go to one that has. The game really needs a specific "resume operation of engine" command to cover these issues.

Anyway, the "info panels" are in the top center of the screen shot above. They appear to show the formations he has, the number in each, and possibly the morale next to the golden eagle icons. I've never seen them before. I don't know how to bring them up. Is this a mod? (Although the original post says no mods)

To the original poster - I think the retreat despite morale above 60 may be due to "Delegate Command On", a message I saw around 4:10 in the video. The formation Captain saw what was happening and told the boys to retreat.

EDIT: Just reviewed the video again. After the first retreat, top morale was 48 for the rest of the video. Retreats without "Delegate Command On" seemed to happen below about 33, and then were individuals, not the whole formation.
Last edited: Jul 18, 2022
You must log in or register to reply here.

Today at 4:47 PM
rascalov
Need More Info The Bannerlord game won't start after the release update. I have uninstalled and reinstalled it. I have turned off my Norton antivirus. still not run.