Been interested in old animation, concerning serious, philosophical, political
and social themes. Its interesting how ideas changed over time since WWII and throughout
the cold war.  They can be kinda creepy sometimes, in a way that modern
animation fails to achieve or surpass.  Its the artistry born out of an age
of  fear, nightmares and horror, but also of  hope and dreams of a brighter future.
So I decided to share a few interesting examples, chronologically,
with diverse cultural themes and topics. A rich fossil record of the failing
and redemption of the human spirit please feel free to discuss and share
other films you've witnessed before or heard about  enjoy...

A Picture in Your Mind -  1948
By: Philip Stapp as part of the Marshall Plan films
Theme: Racism & Intolerance

The Truth About Mother Goose - 1957
By: Walt Disney and directed by Bill Justice
Theme: Historical background behind famous nursery rhymes

Icarus Montgolfier Wright - 1962
By: Format Films and directed by  Osmond Evans
based on a Ray Bradbury story concerning the first man to fly a rocket ship
Theme: Technological pioneering and fame

The Hangman - 1964
By: Les Goldman & Paul Julian,
based on a poem by Maurice Ogden, published in 1954
Theme: Bystander effect and Fascism

The Bear that Wasn't - 1967
By: Chuck Jones and Maurice Noble,
based on a 1946 children's book by Frank Tashlin
Theme: Workplace alienation and social conformity

Plato's cave - 1973
By: **** Oden & Orson Welles,
based on Plato's allegory of the cave
Theme: philosophy and the enlightenment of society

There Will Come Soft Rains - 1984
By: Soviet studio Uzbekfilm and directed by Dmitri Ivanov
and Nazim Touliakhodjaev. based on a 1950, short story by Ray Bradbury
Theme:Technological dystopia and nuclear apocalypse UPDATE: I've noticed that a lot of the power in these shorts,
is conveyed in the atmospheric music choices, played throughout
the films. There is an interesting blog post by Adam Curtis discussing
how music can effect or change the medium's messages....

Interesting how clear it is that they had to walk on eggshells not to point out certain real life connotations that would point out the apparent flaws in the society at the time.

Everything had to be kinda obvious, but still vague.

Peace On Earth Cartoon - 1939
By: Metro-Goldwyn-Mayer, directed by Hugh Harman
Theme: War and the end of humanity


Good Will to Men (remake of the above) - 1955
By: Metro-Goldwyn-Mayer, by Fred Quimby, William Hanna and Joseph Barbera
Theme: War and the end of humanity

Wow, these are really interesting.

Antonis said:
Wow, these are really interesting.
Click to expand...

Yeah. I watched the Hangman and Good Will to Men.
Sobering. Peace is man's great food. Woo.
I'm ahead, I'm a man
I'm the first mammal to wear pants, yeah
I'm at peace with my lust
I can kill 'cause in God I trust, yeah
It's evolution, baby

I'm at peace, I'm the man
Buying stocks on the day of the crash
On the loose, I'm a truck
All the rolling hills, I'll flatten 'em out, yeah
It's herd behavior, uh huh
It's evolution, baby

I'm a thief, I'm a liar
There's my church, I sing in the choir:
Hallelujah, hallelujah

Admire me, admire my home
Admire my son, admire my clones
'Cause we know, appetite for a nightly feast
Those ignorant Indians got nothin' on me
Nothin', why?
Because... it's evolution, baby!

I am ahead, I am advanced
I am the first mammal to make plans, yeah
I crawled the earth, but now I'm higher
2010, watch it go to fire
It's evolution, baby
Do the evolution
Come on, come on, come on 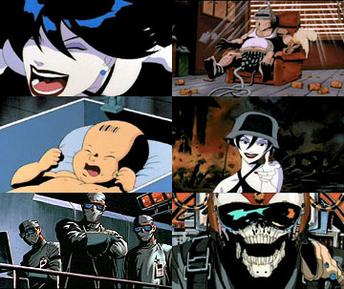 The Hangman one is really disturbing, and it applies to countless situations.

The following lines will surely get stuck in me;

"For who has served me more faithfully
Than you with your coward's hope?" said he,
"And where are the others that might have stood
Side by your side in the common good?"

"Dead," I whispered; and amiably
"Murdered," the Hangman corrected me;
"First the alien, then the Jew...
I did no more than you let me do."

The Ultimate Guide To Bannerlord Series - Full Guides On Each Skill!
2