This is an issue I had with Warband and it persists in Bannerlord:

The issue: I like to have a specific order for my units... but if the unit you hire or create doesn't already exist in your party, it gets added to the bottom of your unit list.

Unit order can be important because it determines what spawns first if you don't have large battle sizes or try to enter bandit camps.

The desired behaviour: I want the game to remember the location relative to other units... even if you no longer have any of them in your party.

Proposed solution: It would be nice to have a small lock icon next to each unit so you can lock it in place in your party. Even if the last unit dies, the game will retain its position in the list but the bar will now be greyed out to show that you have none of those units currently.

Extra: Since it uses a smilar mechanism, make the game remember which items in your inventory you have set to 'locked', so that you don't need to re-lock it every time you lose or gain the same item (e.g. your last type of a food being eaten and you have to re-lock it the next time you get it again).

I made a mockup of how I imagined it to work: 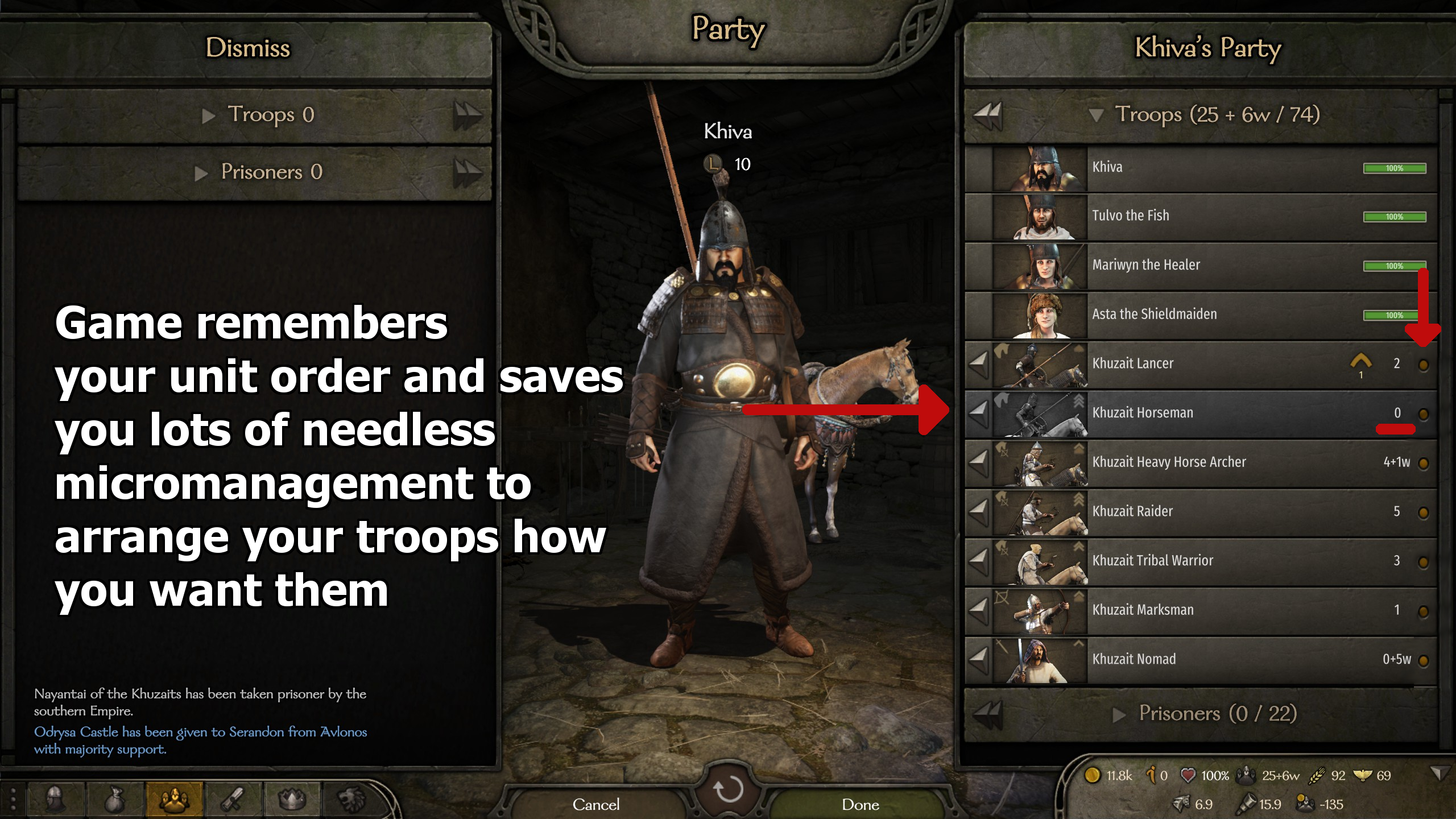 Also, once again... please also let the game remember your 'lock' settings for normal items too in your inventory! I don't want to have to lock down the same food items over and over because they keep getting eaten.

This improvement would be greatly appreciated.

I feel the UI is too similar to how it was in Warband, and small changes like this would make it worthy of being in a 2020 game! I noticed I spend way too much time micro managing my party screen because units die and get replaced a lot.

Thank you for reading!

This would be a nice QOL feature. From the mockup in OP's post, it could also be implemented in a way that fits in well with the existing UI style.

I think this would definitely be an improvement to the existing party UI. I very much appreciate the effort to get an easier overview over your party. I am aware that at this stage, the order in the party screen can be used for the purposes listed above (hideouts etc.). For these purposes the system is certainly quite useful. However, I would prefer a sorting system as described here and here.

The reason is that I see 3 main problems with the 'lock system' described in this thread:

1.
I like to build a diverse army using troops from different cultures (e.g. battanian skirmishers with vlandian sergeants etc). While leveling I would have to lock all intermediate stages of a culture tree to retain order. Unlocking one would reclutter the entire setup once one stage drops to 0 while leveling and I would have to sort again. So overall this could make for a very long party list for those who want to build diverse armies. Scrolling through the long list is already annoying as it is now.

2.
While at war I can not always chose which type of unit I have in my party. However, I would still like to keep my party screen easily sorted. The sorting options would give me a very easy option to get an overview over my troops. The locking system does not really help here because I only want those troops temporarily and I still have to do what is described in 1 to retain order.

3.
In the garrison overview the 'lock system' does not help at all. Often I have to stash some of the lower level troops there after I just conquered a fief. The sorting system would also very easily help me to clear up this mess and give a very quick and good overview over the status of the garrison.

But what about the utilization of party order for hideouts?:
This topic is already discussed in several other topics and I very much agree that it should be possible to handpick certain troops for a hideout. The reason is that different hideouts will (hopefully) demand for different strategies and different troop compositions. In this situation the 'lock system' would actually be detrimental as I would have to re-sort my entire party for every hideout. In my opinion it would be much easier for the player to simply choose some troops for each specific hideout. For this picking step a 'lock system' would actually be nice so you can save your composition for later raids. Army reinforcments could be handled in a separate small box where you could chose which type of army you want to respawn preferentially (e.g. first formation 1 then 2.. etc.; or even have respawn ratio sliders as in the custom battle)

How would I like sorting to look like:
If custom sorting is for some reason to complicated to implement, I would also enjoy a fixed method of sorting.
I guess the most useful system to sort would be: First by formation/class (infantry, archer etc) then by culture then by tier. This fixed sorting system would also provide the opportunity to make the corresponding groups collapsable which would tidy up the party screen quite a bit. Companions could be sorted into a separate collapsable group.

I am sorry to bring this up in a topic that deals with a completely different system. I am just worried that a 'lock system' will be implemented thereby forever burrying my hopes of a simple and efficient sorting system. To be honest I can't understand why a game that focuses so much on building an army doesn't have a halfway decent way to organize it in the first place.

Thank you to everyone for working on improving this game. I never had an experience like this where I can think of literally every part of the game as a small game itself. Opportunities with Bannerlord 2 just seem to be endless.

Show what type of troops you have in party