Mynes moving on with life

Unfortunately, Mynes has decided to take a full break from gaming and developing WEBMM. He wants to move forward in life in general and has ultimately decided to cut down on gaming and IT related stuff entirely. Still, we are grateful for all the work and effort he has done for Warband in creating WBMM and leading it perfectly for a long time. Mynes has given the project over into Bullez hands who is to continue with the WBMM project. For us, we can say that it was great working with Mynes together and we wish him the best of luck and fortune in his life.

Our general belief with unbanning Nessa, Odin and Eduard is that everyone deserves a second chance. We know this is a very complicated topic with many you guys believing that cheaters don’t deserve a second chance in general. But we think otherwise these 3 people got red-handed were all extremely apologetic and reasonable. They were banned for quite some time now and we want to show that people can change in their attitude. It was a difficult decision either way. Of course, we condemn people that cheat and everyone who uses a third party program deserves a proper punishment. However on the other hand though we want to give these 3 players a second chance because we do believe that everyone deserves a second chance if they are ready to show contrition and want to prove that they are able to change their attitude. They are now willing to prove themselves that they aren’t cheating anymore by using MOSS every time they play. Also, we would like to at least allow them to play the last couple months of Warband with the restriction of using MOSS every time they play. Of course, this is associated with a lot of effort from us and them but we are willing to put in this effort in and therefore we have decided to ultimately unban them.

The Future of Warband Matchmaking

Code:
Please send all the applications to LaPache on either Steam or send a Pm on the TW Forum.
Last edited by a moderator: Feb 10, 2020

Web Matchmaking will be down for the next few hours to allow the process of server migration!​

We apologize for the downtime but we are facing a few critical errors currently and are working on a fix already!​

We would like to apologize for the long downtime but we were facing some critical issues. The Server should be working for everyone again!​

We apologize for the short downtime. Our second migration was successful! A few might run into problems to connect to the new server but that should be solving itself automatically over the day.​

For the duration, where no active tournament is ongoing, we decided to host a few training servers. So you have a place where you can play scrims if you do not have your own server. The server uses the NC19 Admin Module and the pass is wbmm. If you need admin rights, please contact bullez.​

We want to apologize for the german server issues over the past days. We ran into networking and routing issues and waiting for a fix from the provider. Sorry for any inconvenience this may have caused.​

Server Issues​
​
We wish to apologize for the short downtime and general issues regarding our servers. We are currently facing major difficulties on DDoS attacks which normally should have been absorbed by our DDoS protection. We are currently investigating how to fix it.

Also as a reminder bullez is trying his best to give everyone a good gaming experience on his servers.​

Down Time​
​
Due to the problems we currently face with our provider, we were forced to change it. To fulfil that we have to migrate our system to the new host. Sadly this takes a few hours due to the DNS Record update for our domain. We hope that we will be back tomorrow around midday with better quality, fixed issues and without random disconnections to our game servers and the website.

We are especially sorry for today since most of you probably wanted to train and prepare for the official. As pointed out, we hope we will be back on track tomorrow.​

For anyone who is experiencing issues with connecting to the Warband Matchmaking Website. Here are some ways so resolve the problem. Right now, you can solve the issue by using a different browser where it still works such as edge or you can change some options for your browser.

Firefox:
(1) In a new tab, type or paste about:config in the address bar and press Enter/Return. Click the button promising to be careful.
(2) Search for security.tls.version.min preference and change the value to 1. If it is unset add it as a number with the value 1. 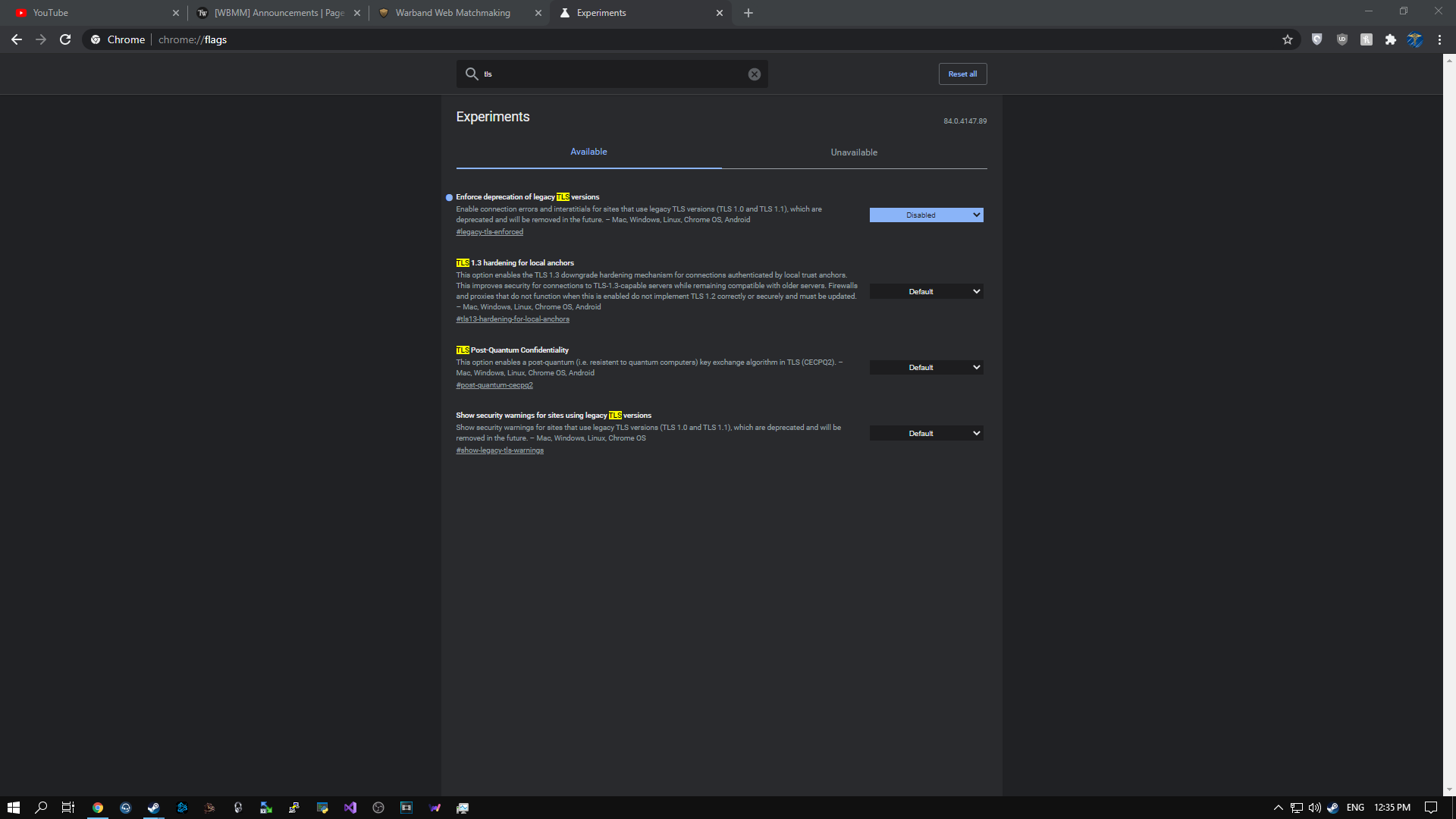 The connection issues mentioned in the post above have been fixed. Warband Matchmaking should be fully functional on any browser. All the changes you have made can be reverted or you can switch back to your preferred browser. We apologize for the long-lasting issue. If you still experience any connecting issues, please let us know.

North American Matchmaking is back! Log in here to join NA WEBMM.
It's not added to main page yet but if you change the region at the top right you can connect to North America aswell. Also make sure to check out the updated Staff thread here. We've made some changes to the EU and a lot of changes to the NA admin team.

European Pro Queue enabled!​
We are happy to announce that we are finished with separating the European queue into 2 different type of queues. The normal European queue will still be available for everyone while the new queue is only accessible for specific players whitelisted by the administration team.

How does it work?
How to I get to play in the more experienced queue?
Ps: New admins are always welcome. Especially now after seperating Europe into 2 different queues.
Administrators wanted

Code:
Please send all the applications to LaPache on either Steam or send a Pm on the
TW Forum.​

East Asia Matchmaking has been implemented! Log in here to join EA WEBMM.
Big thanks to Creeper for hosting the servers and taking over the EA Community Manager role.
Side note: The region is using the SA slot and therefore our system handles the region as SA but the servers are located in China.
​

After each WBMM season we want to publish a list of the best players and provide rankings similar to Yami's tournament statistics. Over the next seasons, more categories will be added. Check it out here!
​

Temporary Down Time on Sunday

Due to a server migration from our provider, the website will be unavailable on Sunday (28.03) from 7 CET to approximately 15 CET.
​

Current Issues with our gameserver provider

The migration this morning was successful and the website is available again. However, the game server provider has been having problems since last night and the Warband servers are unreachable. We are currently waiting for a fix there. Sorry for the unexpected downtime!
​

New game servers have been added. Let me know what you think about the performance. The queue has been enabled again.
​

As some guys of you already noticed. There is a new active "pro queue" mostly for DIV A players and other experienced players on the North American region. It's organized by Apollo and Specimen. If you feel like you have been left out please contact one of them. Refrain from contacting Bullez or me.​
Last edited by a moderator: Nov 1, 2021

Question about up coming Private Servers