YOU'RE BACK! YOU ARE MY HERO!

1.  Are these 1:1 replacements for the existing meshes, in terms of footprint?  Or are the existing scenes going to need to be completely rebuilt to use?

2.  Do they have AO set up via vertex baking?

3.  What are the specs, in terms of performance figures, for these vs. Native?  I.E., polycount, texture sizes, are LODs provided?

4.  Is this pack going to be restricted like your other stuff was when you originally released it, or may mods freely use it once it's available, provided you're credited properly?

I didn't use your other releases because of this issue at the time; I don't use anything here I cannot modify and re-distribute to others in Blood and Steel, because I want to be able to give back what I use, not just leech.  I saw that you changed that policy for your flora pack later, so I'd appreciate knowing how you feel about this, as integrating something into a major project like this is non-trivial and I don't want to waste my time or offend you by giving others the right to re-use any improvements I might make, provided that they credit you properly.

1.  Are these 1:1 replacements for the existing meshes, in terms of footprint?  Or are the existing scenes going to need to be completely rebuilt to use?
Click to expand...

If they are like his other ones they are going to be new scene props, so the existing scenes would have to be remade if one wants to include these props.

Lueii said:
YOU'RE BACK! YOU ARE MY HERO!
Click to expand...

xenoargh said:
1.  Are these 1:1 replacements for the existing meshes, in terms of footprint?  Or are the existing scenes going to need to be completely rebuilt to use?
Click to expand...

No, they will be new buildings, in separate brf file.

xenoargh said:
2.  Do they have AO set up via vertex baking?
Click to expand...

Yes, I do this in openBRF

xenoargh said:
3.  What are the specs, in terms of performance figures, for these vs. Native?  I.E., polycount, texture sizes, are LODs provided?
Click to expand...

xenoargh said:
4.  Is this pack going to be restricted like your other stuff was when you originally released it, or may mods freely use it once it's available, provided you're credited properly?
Click to expand...

Probably GPL or Creative Commons license. Not restricted to M&B community
I want to set up "base" - buildings +environments. for non-commercial gamedev, so it can be used in open-source like projects.
Will try to make better looking PL at some point (I have loooot more photos of plants/trees - been making my own library of photos for some time now).

Some eyecandy (streets are old version, I haven't exported new ones yet).
Those are some random test scenes. 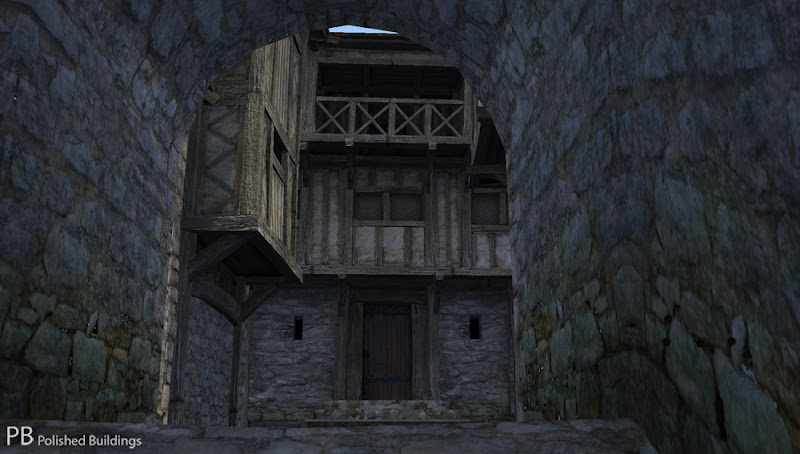 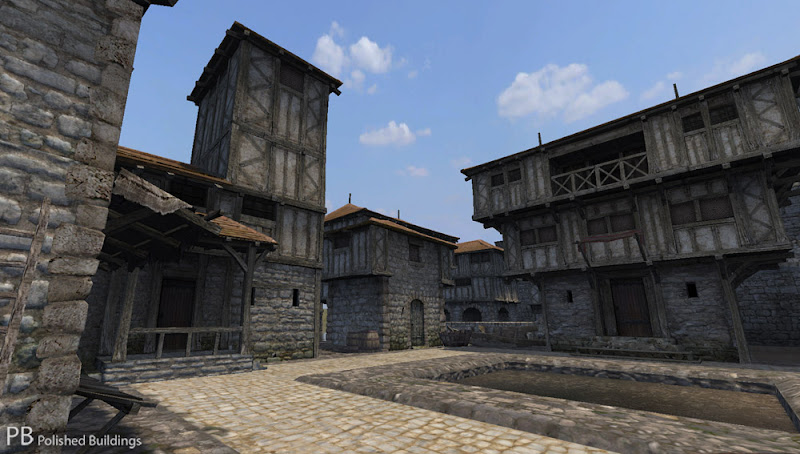 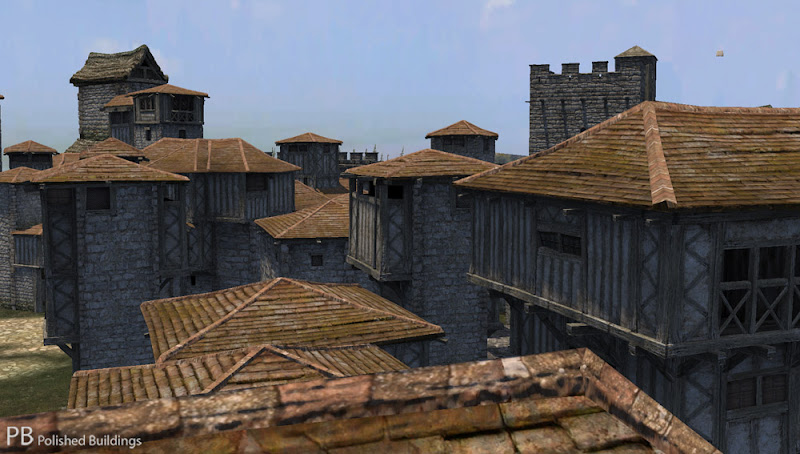 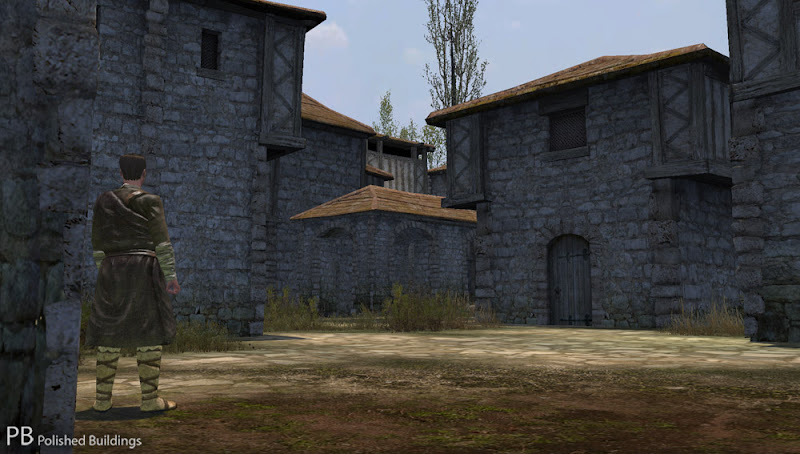 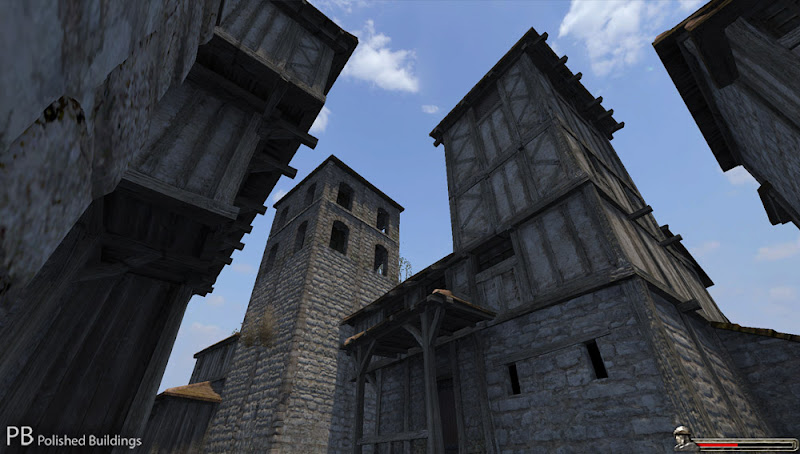 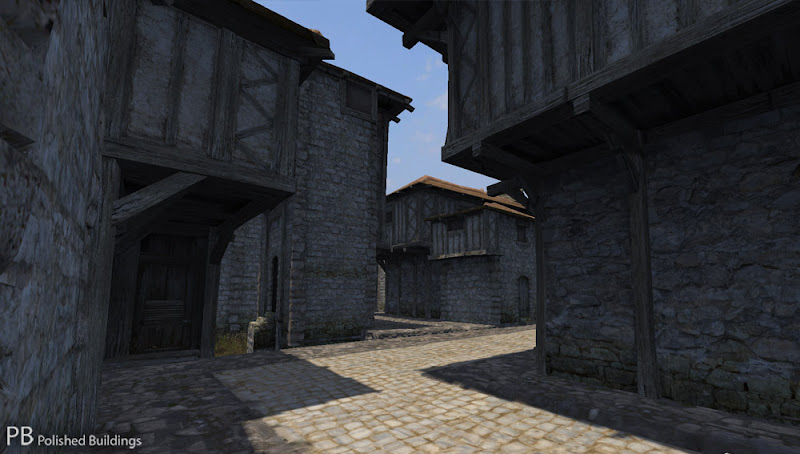 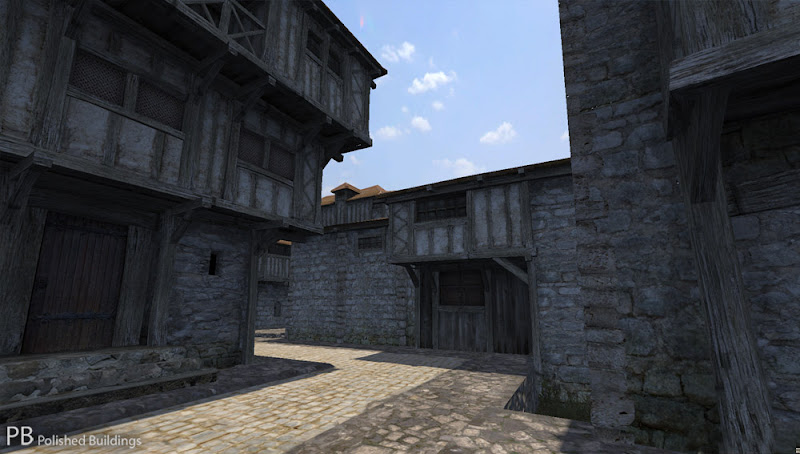 Love the rooftops. Please make sure the player can climb one of the towers and enjoy the view

Then dive off into a pile of hay
But seriously, those look great!

Stevon said:
Then dive off into a pile of hay
But seriously, those look great!
Click to expand...

I agree if someone ever updates the hunt mod these would be perfect for it.

oh man this look zejebiste! Looks like some different game (a better one)
If taleworlds won't hire gutekfiutek for M&B 2 dev. it will be a big upset.

@gutekfiutek:  Thanks for the answers, especially on the last part.


I'm cool with either GPL or CC allowing alteration and redistribution; I tend to change things and re-optimize assets I use, and I hate having to put little "you can't use ABC, because I'm not quite sure it's legal for me to give you permission to re-use it" clauses into my mission statement / license

I think more people will use it for things if it's CC-SA-NC (i.e., you get credited explicitly, non-commercial use only), because people get very freaked out by the GPL's clauses concerning the rest of the "work" and applicability to same.  I know enough about the GPL that I don't care; a piece of GPL content is "mere data" and would not put the code of a mod or game under the GPL per se.  But I think a lot more people are comfortable with CC licenses, because of that perception.  Just my two cents; I've dealt with lots of license whining elsewhere because of GPL'd stuff I made.

Anyhow, just thought I'd bring that up; people have been complaining since I released Blood and Steel about how I didn't use Polished Landscapes' flora, but the license issues were at the root of it; I didn't want to use it and offend you by granting others permission to re-use, or even worse have to pull it and look like a jerk.  I made the decision to be Open Source pretty much immediately; I hated the idea of using and improving all the OSP stuff I used and then saying, "you can't use this"

If you ever do any more work with flora, I might be willing to help out; I reworked most of the Taleworlds flora for the mod, it's not a biggie for most things.  If nothing else, it'd be pretty nice to lay out 2-3 more sheets for random bushes and flowers and make the flats.

xenoargh, I'm aware that people have problems with PL and PB licenses etc.
What I wanted to aviod (happened to some of my friends) is someone using their job, changing it so it looks terrible (because most of modders are amateurs) and putting authors name in credits.
So it looked that my friends made really terrible looking models/objects.

If you have any suggestions what license is best for me, let me know.

First test street in game - stil lots of tweaking needed, wall texture looks terrible.
Also it needs some additional objects, I will try to add some vine soon.
But it's only street system test (it seems to work fine).

Anyone else HATES Warband sun angles? 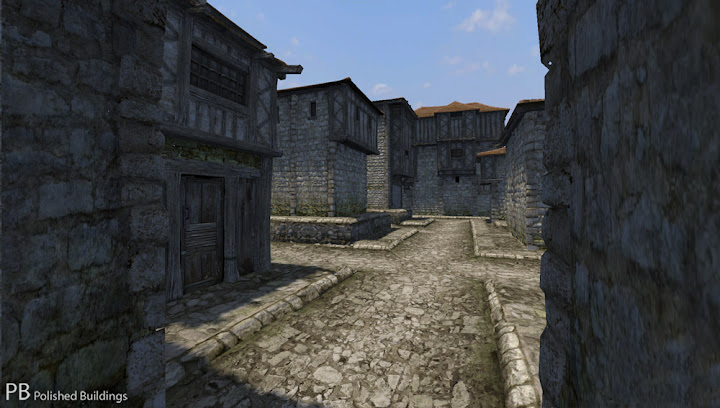 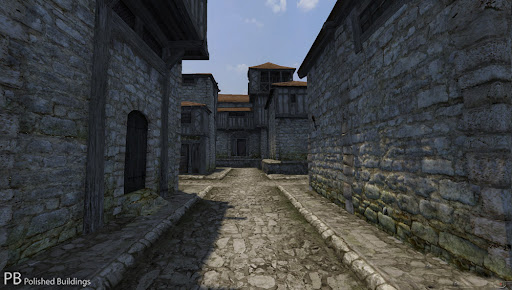 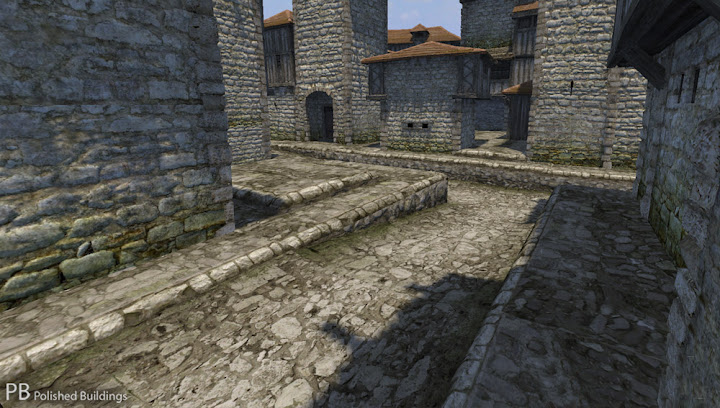 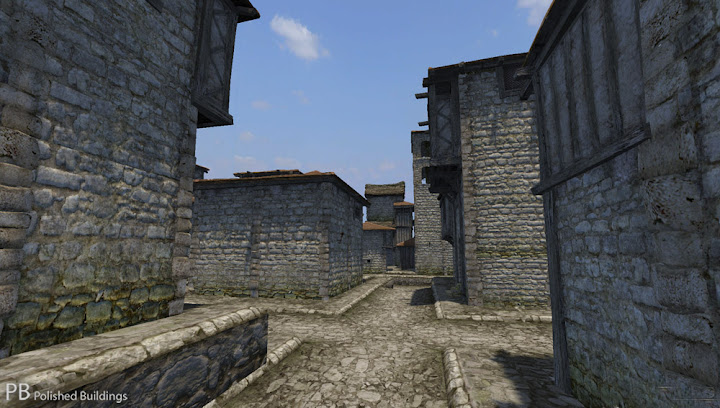 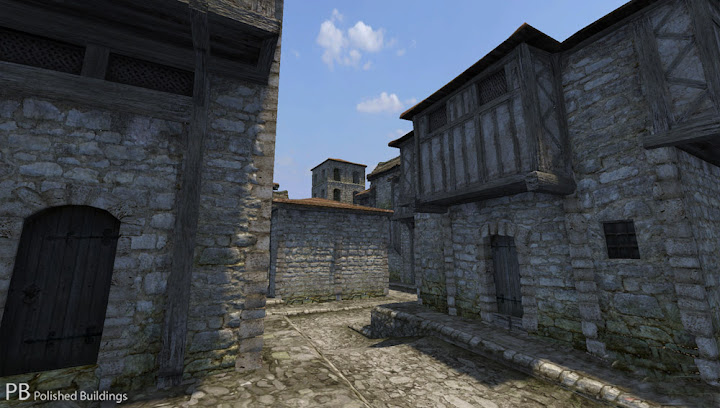 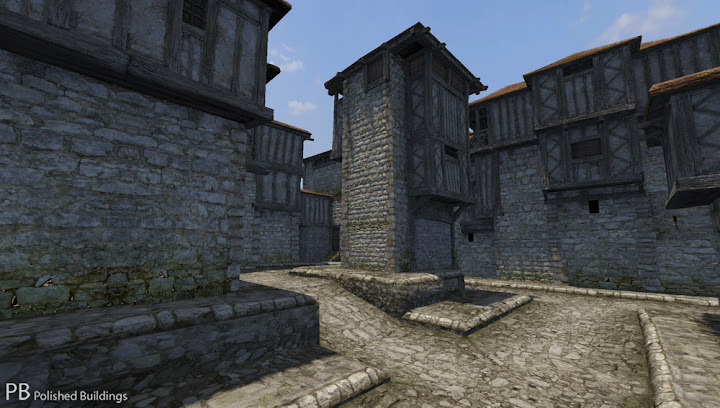 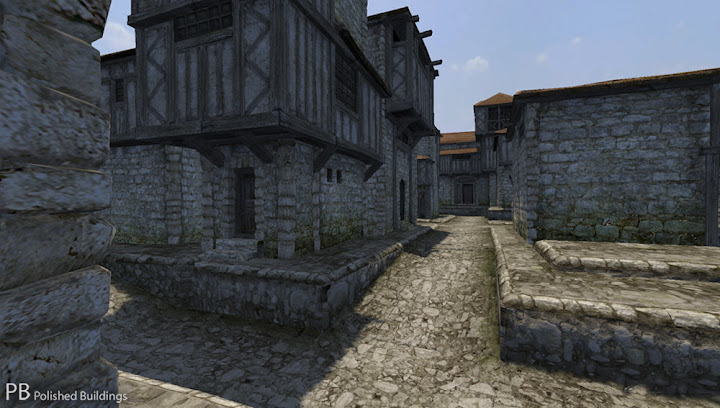 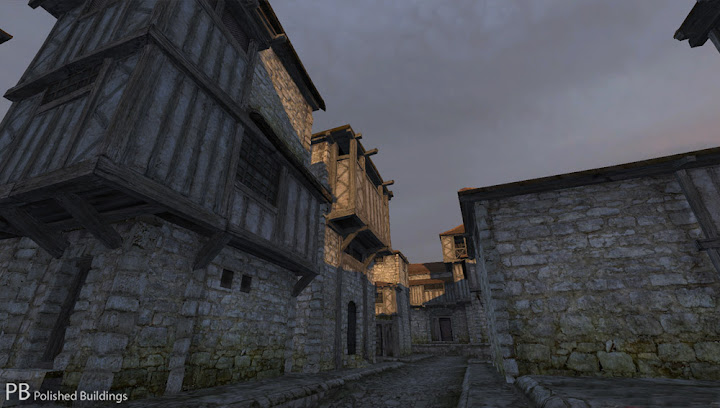 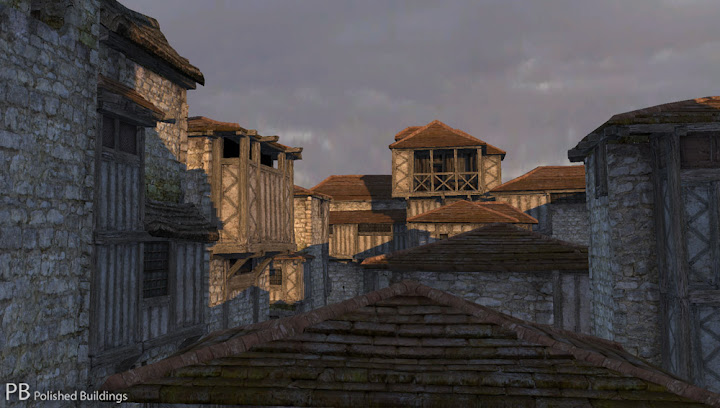 Ah, I see.  Well, I've had that happen to me many times, and I just laugh at them privately and move on   If you're showing work professionally, nobody will ever confuse your work with some crummy third-party thing; they're looking at your portfolio.  I really don't even worry about it at all.

As does Chuck Norris

i really like the italian style of the towers

Looking forward to those buildings!

When is this going to be done? Looks stunning. 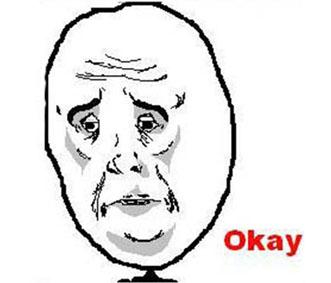 Yeah, my curiosity got the better of me. I apologize.