Hi Friends,
I planned to adopt mod battle for Hindustan for war band and started some working on it.
Today when I wake up I have thought only mod about internal war is not sufficient so I Planned the mod about ancient India.
MAHABHARAT
The mod about India and other country like Yavana(Greece),Hara Huna(In do-Chines),Saka Kingdom(Scythians)etc.

Features of this mod:

which time period will this mod be exactly ?
anyways, hope this helps

"Warriors of Eurasia" by Dr, M.Gorelik 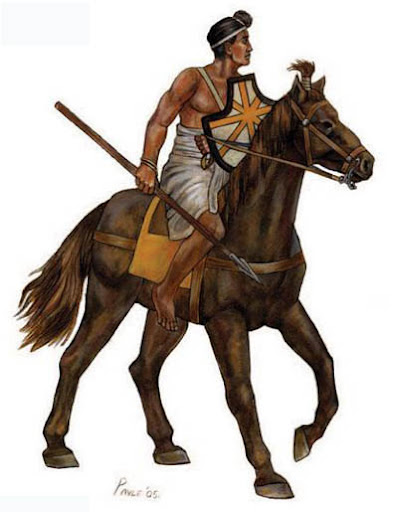 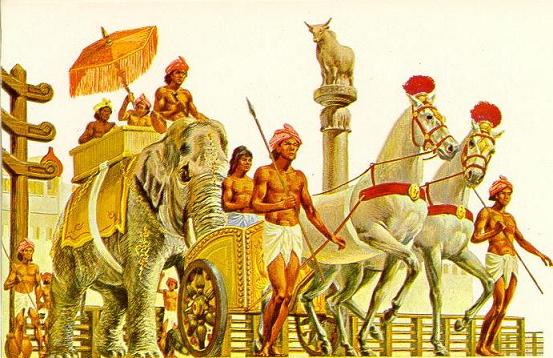 Thanks matmohair1.
currently I am working on Companions and weapons.
It is about early vedic period.
Soon the preview of companions is available.

Some portrait about Mahabharat.

Legendary Warrior Bhishma who made Lord Krishna break His vow not to raise a weapon in the war,

The Death of Bhishma
In the great battle at Kurukshetra, Bhishma was the supreme commander of the Kaurava forces for ten days compared to Drona's five, Karna's two and Salya's one-the last day. He fought reluctantly on the side of the Kauravas; nevertheless, he gave it his best effort. At one stage Arjuna's disinclination to fight him, nearly made Krishna break His vow not to raise a weapon in the war. Not even Arjuna was able to defeat Bhishma because in addition to being a peerless warrior he was blessed with choosing the moment of his death.

In this war, Bhishma vowed not to kill any of the Pandavas, as he loved them, being their grandsire. Duryodhan often confronted Bhishma alleging that he was not actually fighting for the Kaurava camp as he wouldn't kill any Pandava but would let them kill Kauravas. But in fact, Bhishma was the strongest barrier that had protected the Kaurava camp from impending defeat.

The war was thus locked in a stalemate. As the Pandavas mulled over this situation, Krishna advised them to visit Bhishma himself and request him to suggest a way out of this stalemate. Bhishma knew in his heart that the Pandavas were righteous and chaste, and that he stood as the greatest obstacle in their path to victory, so when they visited Bhishma, he told them that if faced by an other gender that is a gender which has both features of a male and female in battle he would cease to fight and not lift weapons against her.

The Pandavas were initially not agreeable to such a ploy, as by bringing such a gender to the battleground they would disgrace themselves, but Krishna suggested a clever alternative. And thus, on the next day - the tenth day of battle - Shikhandi accompanied Arjuna on the latter's chariot and they faced Bhishma who put his bow and arrows down. He was then felled in battle by a reluctant, ashamed and tearful Arjuna pierced by innumerable arrows. As Bhishma fell, his whole body was held above the ground by the shafts of Arjuna's arrows which protruded from his back, and through his arms and legs. Seeing Bhishma laid on such a bed of arrows humbled even the gods who watched from the heavens in reverence, silently blessing the mighty warrior.

The chariot on which my friend is working:-

Some screenshot of swords:-

the swords dont look ancient, they seem to be based on late Mughal & Rajput examples

Thanks for info mat.
The battle of kurukshetra is dated 6000 BCE – 500 BCE so I cant judge which swords is used by us.
According to our religious texts and other texts like Dhanurveda At that time Archery is most noble,fighting with the spear ranks next, while fighting with the sword is considered unrefined, and wrestling(fighting with bare hands) is classed as the meanest or worst form of fighting.Most of the heroes are Good Archer like Shri Ram, Eklavya ,Arjun, Karn, Bhishma etc.
so I didn't need more swords.

at that time Greeks are far from Gandhar(Afghanistan).
they are foreigner for us but we have commercial and political relations.

That time the ordinary people uses long bow made of bamboo or other wood or other material but Kshatriya and Brahmins doesn't
touch hide,bones so they use metal or composite bows.

my problem is armor for that time for which I haven't meshes. so the workload is bigger on me.

I am currently working on mace and bow.
the mace should be like this

or the head should be even larger.

Its was completely made of iron and its length was roughly from a mans hip to the ground. It is called "Gada" in India.

This weapon needed some sheer physical strength to unleash the devastating power upon the enemies. One powerful blow and the enemy is akin to a mashed potato.

In wikipedia it says Mahabharata dates written nearly 400yrs BCE,but it may have unwritten records up to 800yrs or 900yrs BCE.And there was no record in wikipedia of Yavana,Xia,Saka and Sinhala. hah aha, ive seen shows of this on my t.v downstairs on channels like Star plus, and Sony asia because my family are always watching indian drama's hahaha.

ThaneWulfgharn said:
In wikipedia it says Mahabharata dates written nearly 400yrs BCE,but it may have unwritten records up to 800yrs or 900yrs BCE.And there was no record in wikipedia of Yavana,Xia,Saka and Sinhala.

so date of mahabharat war is unclear.

2)China is mentioned as one among the northern kingdoms:

Mahabharata, Book 6, chapter 9 (MBh.6.9) mentions like this:- Among the tribes of the north are the Mlecchas, and the Kruras, the Yavanas, the Chinas, the Kamvojas, the Darunas, and many Mleccha tribes; the Sukritvahas, the Kulatthas, the Hunas, and the Parasikas; the Ramanas, and the Dasamalikas.

The Yavanas, the Kiratas, the Gandharvas, the Chinas, the Savaras, the Barbaras, the Sakas, the Tusharas, the Kankas, the Pathavas, the Andhras, the Madrakas, the Paundras, the Pulindas, the Ramathas, the Kamvojas were mentioned together as tribes beyond the kingdoms of Aryavarta. The Aryavarta kings had doubts on dealing with them.

also there is tale fight between kalyavan and Lord Krishna in which kalyavan is burned by king muchkund.
Bhima mentions a China king Dhautamulaka, who caused the destruction of his own race (5,74). The name "Dhautamulaka" translates to "clean root", and might be a reference to the last Xia emperor Jie, whose name means "clean" in Chinese.

sorry for my bad english as It is not my native language.
and again thanks for shields.

Okay.Let's pass to another part of the mod:The items.
Since we have few resources about the Indian weapons of that time,I suggest the Kuru use the following items:
Axe(Warrider(M&B 0.2) had an Indian axe I'm trying to remake with Warband quality texture)
Chakram
Katar
Mace
Spear
Trident
Bow
Arrow

I suggest to make every weapon(exept for bow,which I will find other variations) have these variations:
Copper->Brass->Iron->Steel->Ornate->Wootz Steel->Divine(like the Bow of Rama for bows,Trishula for the Trident or the Sudarshana Chakra for the chakram)
Here is my work on Katars(and I did the same thing for Chakram):
http://imageshack.us/photo/my-images/100/katars.jpg/
From left to right:
Copper->Brass->Iron->Steel->Ornate->Wootz Steel

P.S.If you know any God using a Katar,tell me.

You may want to model your weapons after these South Indian examples.  We don't know exactly what Arjuna and his brothers used, but these are probably closer than the Persian/Turkish-influenced tulwars and shamshirs I had in Battle for Hindustan. 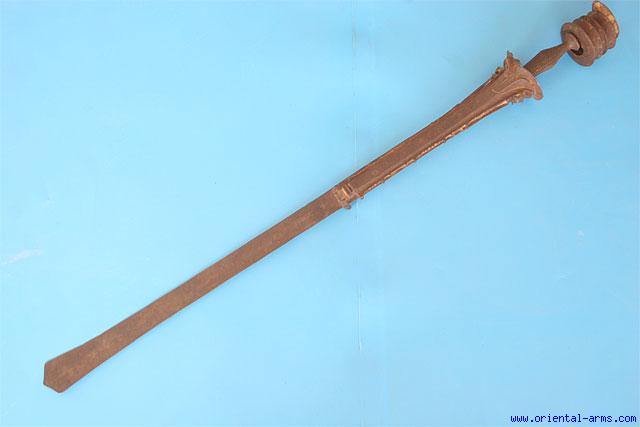 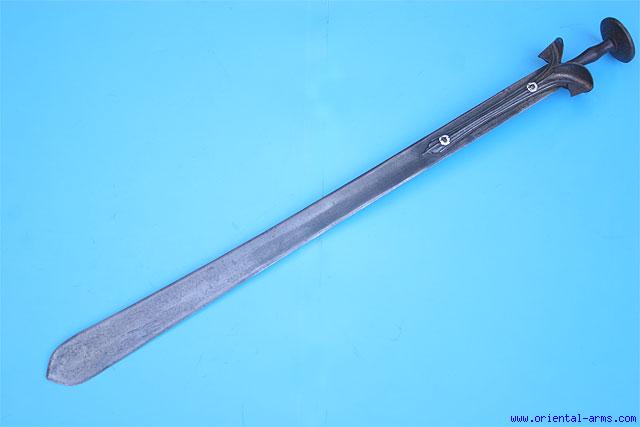 Thanks dariel and ThaneWulfgharn for your help.
I think I have to add some fantasy work to this mod as pure mod on mahabharat require lot of work.
my collage is starting on 2nd july and my project work is already started 2 days ago.so I have shortage of time.
I created 3 models of Gada. tonight texturing work shall be done.

So overall progess for weapon
Swords 6 models done with texturing(5 models are in queue)
bows (80% done, only for noble troop remaining)


ThaneWulfgharn said:
P.S.If you know any God using a Katar,tell me.
Click to expand...

According to my knowledge no god uses katar.
Katar looks cool.

The Sudarshana Chakra:Weapon of Lord Vishnu.

Details about it:
-It is supposed to be the most powerful throwing weapon in the mod.Maybe script it with some sort of Divine Power,like explosion where the wootz steel shards go like shrapnel(there is a fragment grenade script) and the fact that "returns on your hand"(Scripting refill ammo).

Disclaimer:
-The Swastika on the Sudarshana is a Hindu symbol of the sun.It has nothing to do with racism.Actually,Hitler adopted the Swastika from the Hindu and the Vikings(both have the symbol).Maybe he wanted to mean his regime was allmighty and undefeatable like the sun.There is also a difference between the Hindu and the Nazi Swastika,Nazi Swastika arms are on the reverse side of the Hindu one.
You must log in or register to reply here.