Chile Independence Mod Version 3.0​
Hello guys, as you are aware, I have finished a new version of the mod Independence of Chile. The work has been hard, although I have not finished yet because I need to spend more time in that. There are things such as the castles in singleplayer (barracks), maps are not published yet and some cities are not finished (the Mapuche camps and 3 more). Everything else is part of the new faction uniforms and I have to locate the villages and barracks in the general map.
There were many volunteers who offered their help to finish editing the castles, but none of them was constant, only one of them who can takes all the credits by the creation of most of the cities (I said most of that because I only did 2, Santiago and Rancagua).
Consequently, I've decided to call him "Beta Version 3". Initially my idea was  leave completed because of that I've delayed...

I've added many new things that the detail below:

-New Standards for single and multiplayer
-New Mapuche costumes
-New banner
-Training Square in fast battle or skirmish (runs with the letter H) you can also select infantry separately from other troops, it´s to say, press number 1 (light infantry) or 2 (heavy infantry) and 3 for cavalry.
-Historic Lord names for all Factions.
-New Dynamics tavern, where you can find characters playing guitar, poets that let you play music for 10 denars (lack to add the Argentina and Spanish music) while you're in the tavern, also you can play cards with the bartenders and bet money.  Occasionally you can find a Chinese woman (wife life), etc.
-New Dialogs, new textures, new decoration.
-New Icons of the general map, 3 per faction.
-You Can see the tree of troops on "Reports" and you can see all the equipment and skills of each troop.
-New Cities, New buildings.
-New Textures and beards for the character.
-You Can train with your favorite weapons in the training centers, including pistol and musket.
-Tournaments With new weapons and uniforms.
-New Factions shields, shot effect.
-Animation-bayonet.
-Granade for single and multiplayer ETC ....
-I’ve added "Scorts" in taverns (in 10 cities), which may provide their services for a certain amount of money, for yourself or your tropos. If it's for you, your troops will go down morale in some amount of points, but if it is for your men, it will be upside down, but it costs more expensive.

In multiplayer have added some sounds by pressing the letter V (victory with animation), B (encouragement to the troops), N (horn sound) and M (drum sound)
-Also In multiplayer you will be able to select separate infantry troops (bots), the difference with the skirmish, that is not all wear light infantry ammunition:
light infantry; all carry a musket, but all not carry ammunition, they are good at melee, they are stronger and faster, but they are not very resistant.
Grenadiers or second infantry: all carry musket and ammunition, they use more accurate muskets, have less strength and less speed, but they are more resistant.
Hunters or third troop: they carry a musket and ammunition, their muskets are the best, more accurately, no melee, less strength and slower.
cavalry: there are 2 in each faction, one is stronger with more melee but less riding (only in one faction there is one type).

In this last (multiplayer), I had a problem with the sound of guns, so this week, I was working on that and I created a patch (light) that will have to download along
with the mod (was not worth upload it again as the date as 200 people already downloaded).

Credit
I give many credit to "Dangermau5" it was my partner in every sense, he was the creator of the cities mentioned above, in addition to always provide with information to make this mod as much historical as possible.

I Also give many credit to Camilo Escandar, He was the person who helped me a lot with the mod' textures.

I also give credit to "Idibil" Taleworlds forum (one of the creators of the mod Brytenwalda), who was always present in my consultations and doubts, besides sending
information to complete certain script in the mod.

I give credit also to "AndyYa" also Taleworlds forum that helped me in certain occasions. And the following individuals for sharing their codes that I have added to the mod:


As I said earlier, must download both, installed the mod in modules and then place the patch files in the mod folder.

Ingaming stable server whenever they want to play. 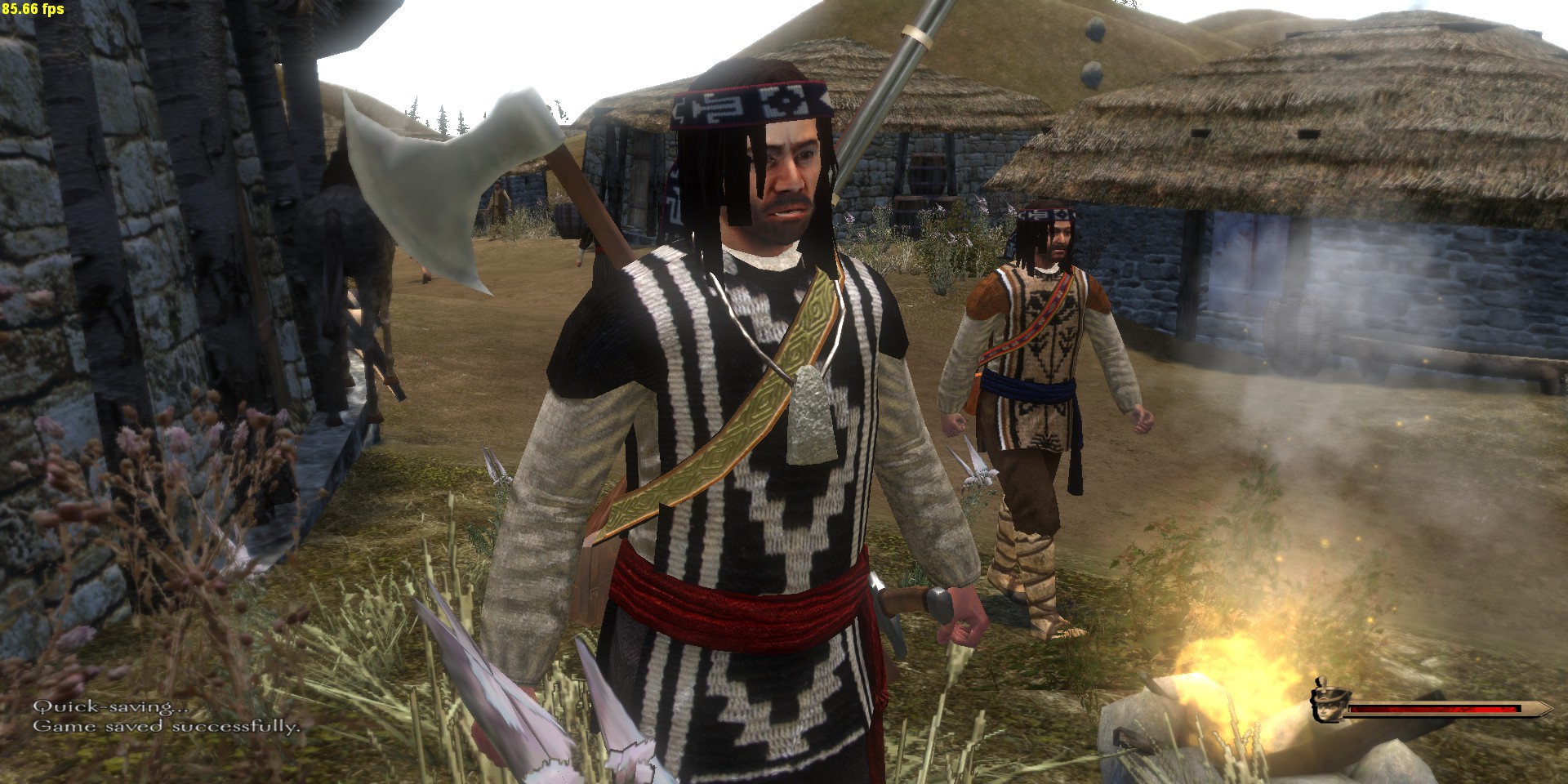 Friends, vote for my mod please ... there are 2 days to elect mod ModDB year, and I want to be within the 100

Been playing this and enjoyed it a bit, just the occasional minor thing that drives me mad. Because I'm a stupid Englishman I know little-to-nothing about the period and so I have no idea which faction is which.
There's also the initial menu section, where you choose your starting location and you're picking a native faction and have no idea who you start out with.

Also, a few items and troops don't have capitalised names. I'm looking at the machete and it drives me mad that there's no capital letter at the start like almost everything else. Same goes for some troops.

And the Spanish names have this amazing knack for making me upgrade a soldier, getting a cavalryman and then feeling stupid for not putting 2 and 2 together to realised part of the name meant horse or mounted.

Friend, I need someone to translate it to English.

you can also play it in Spanish, you might understand a little,
but for that, you must have well placed the translation, that is, having only files: ui, hint and uimain, in the folder "es" of Warband languages.
D:\Steam\steamapps\common\MountBlade Warband\languages\es

But the problem is only the translation

I may go through the files myself and fix some of those issues. If I do, would you like me to share the files?

mauromagno said:
you can also play it in Spanish, you might understand a little,
Click to expand...

Not if you took German in high school like me

Hazzardevil said:
I may go through the files myself and fix some of those issues. If I do, would you like me to share the files?
Click to expand...

mauromagno said:
you can also play it in Spanish, you might understand a little,
Click to expand...

Not if you took German in high school like me

I feel fully qualified to play this mod. I did some Spanish in school and got into lots of fights.

I feel fully qualified to play this mod. I did some Spanish in school and got into lots of fights.
Click to expand...

After around about an hour of retyping, I think I've fixed my issues with the typing. I'll give it a short go and see if there's anything wrong with the item's names.

Edit: After going through the entire file with an item editor the module won't load.

Hazzardevil said:
After around about an hour of retyping, I think I've fixed my issues with the typing. I'll give it a short go and see if there's anything wrong with the item's names.

Edit: After going through the entire file with an item editor the module won't load.

Hello Friend....
which is really the problem you have? Delivery details please...

as I understand, it's about names of troops and factions ...
All you have to do is check the csv files in the folder "es" of languajes the mod and translate and put in the folder "en" ......
D:\Steam\steamapps\common\MountBlade Warband\Modules\IND_CHILE_3\languages\es

I was editing item_kings1.txt, I'll take a look at rgl_config and see if I can figure out what I did wrong.

It worked this time I loaded up. Here we go: https://mega.nz/#!jhUmHBpB!aNGVn2nu67_Zwz0qzOj-Uf3rZhbLFlc2bOsZzsFQ0Tw

Hazzardevil said:
I was editing item_kings1.txt, I'll take a look at rgl_config and see if I can figure out what I did wrong.
Click to expand...