notme said:
I've hit a problem trying to start out as an adventurer - whether I select total war or not, when I join the army of any lord as freelancer, that lord's faction immediately finds itself at war against all factions on the map (!!!) - not just its neighbors.

Is this a known bug and is there any way to avoid it? Right now, I can't play freelancer, as the faction I join will end up being pounded from all sides to oblivion.
Click to expand...

Yeah I'm having issue too right now. I don't know if I installed the mod correctly (installed v2.1 and then patch 3.3 from moddb) but every time I enlist in a lord's army, his faction goes to war with everyone. Also, when you leave the army, you still have negative relations with all those factions, even though the faction relation report shows otherwise.
Last edited: Jul 11, 2020

Hello, anyway to edit back in 2 branch CTT option into the game or change the maximum level of top tier troop to 36 like the knight order troops? I know there's a bug with the two branch for CTT but it does feel like my kingdom's top tier troops are weaker than many vanilla top tier troops present in the game.

For example even the level 28 troops, Senior Italian knights would have wep proficiency at around 280 but the maximum I can get for my troops are around 200.

I'm just wondering where in the source code I could edit to change the maximum level for my 3 branch CTT troops, if possible at all? Thank you

I'm trying to figure out whether lords training their own soldiers is broken or balanced. Do the lords use their wealth to train and maintain their army? If not, I'd say it is unbalanced. I've seen a 400 strong lord army with nearly 100 senior knights and another 200 of top tier troops while the lord himself had 500 in wealth. This is putting the player at a severe disadvantage.

I think it'd be more balanced if the lords pay their troops wages and attrition occurs if the lord has not enough gold to pay.

I have encountered quite a number of problems in this mod.
When I extracted the 7zip file , it shows that I have 1406 errors and a lot of checksum errors.
I have installed v3.3 patch from ModDb and it extracted without errors.
I downloaded this from Nexusmods and I had quite a stable speed.
When I opened this mod, it showed the main menu in an incomprehensible Font which looked like some east Asian script but I can't recognize it.
It could be that there is some corruption within this mod which caused it.
When I try to open custom battles through guessing from menu in the strange script, it shows a number of "can't load textures :/(texture.dds) " errors and then after I keep on clicking ok and the custom battles menu finally loads and I play the battle just randomly, the battle runs fine but again I encounter a number of errors and I have to click "OK" on the dialog box every time.
I then open the "start new game" option.
And again everything about choosing who your father was, the option to select lance recruitment or native is written in the strange script
I just keep on pressing on any one of the option to start the game.
The character stats menu has everything from skills to charcater proficiency in the strange writing.
The map looks fine but the name of the cities and every text is in the strange script.
I have took photos of the errors and I would upload it soon.

Please, help me out in this issue and I would like to know if the problem is in the website "Nexusmods" from which I downloaded it, or due to "network errors"

Can someone tell me how to upload pictures?
I am new here.
It shows ""http:/"" when I click on the photo option in the message box.

You would need to upload your picture on a site like Imgur, then copy the image address of the one you just uploaded there and insert it in the "http:/" here.

Charles_de_Tonkin said:
You would need to upload your picture on a site like Imgur, then copy the image address of the one you just uploaded there and insert it in the "http:/" here.
Click to expand...

Ok. Thank you.
I figured it out. 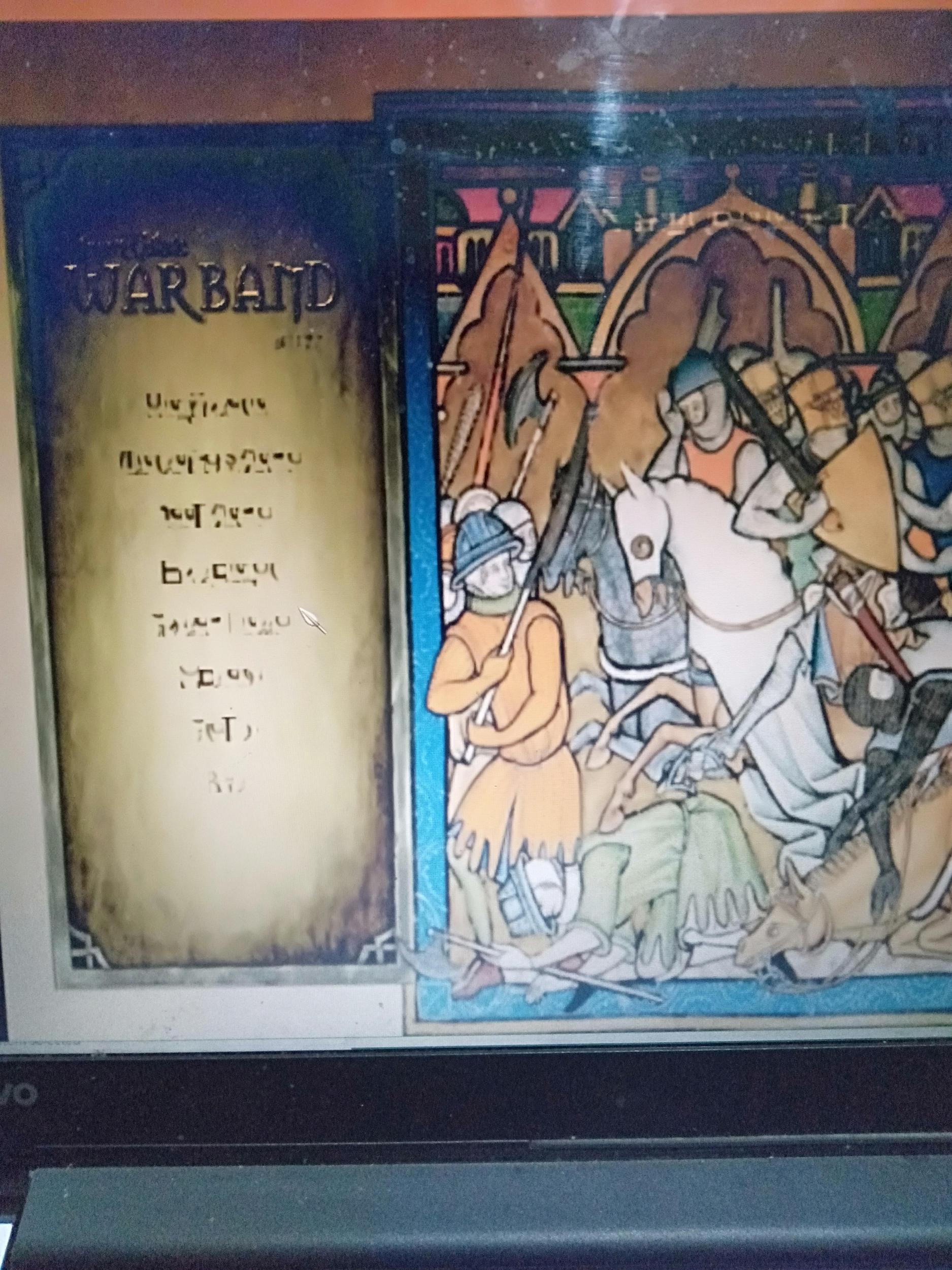 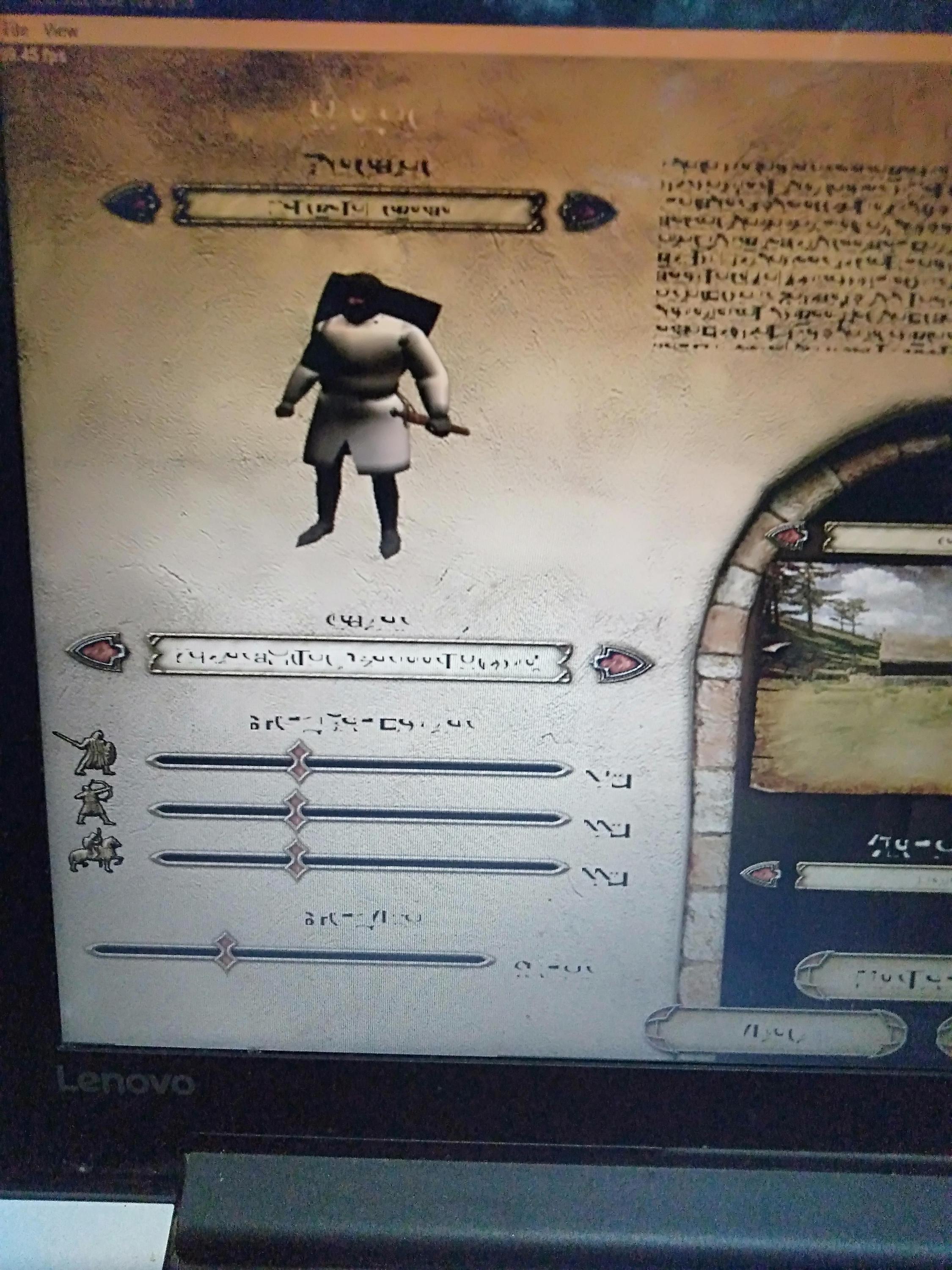 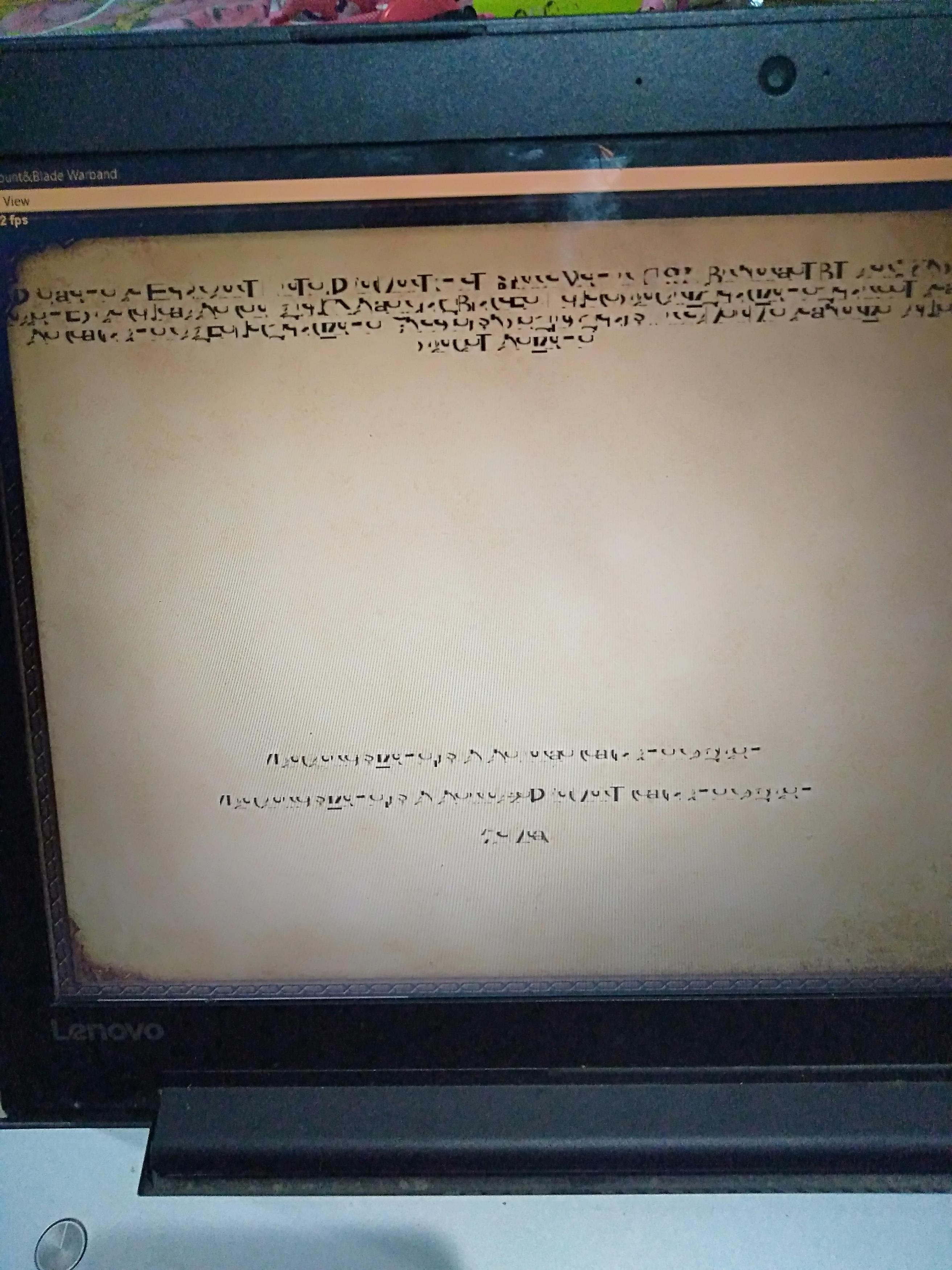 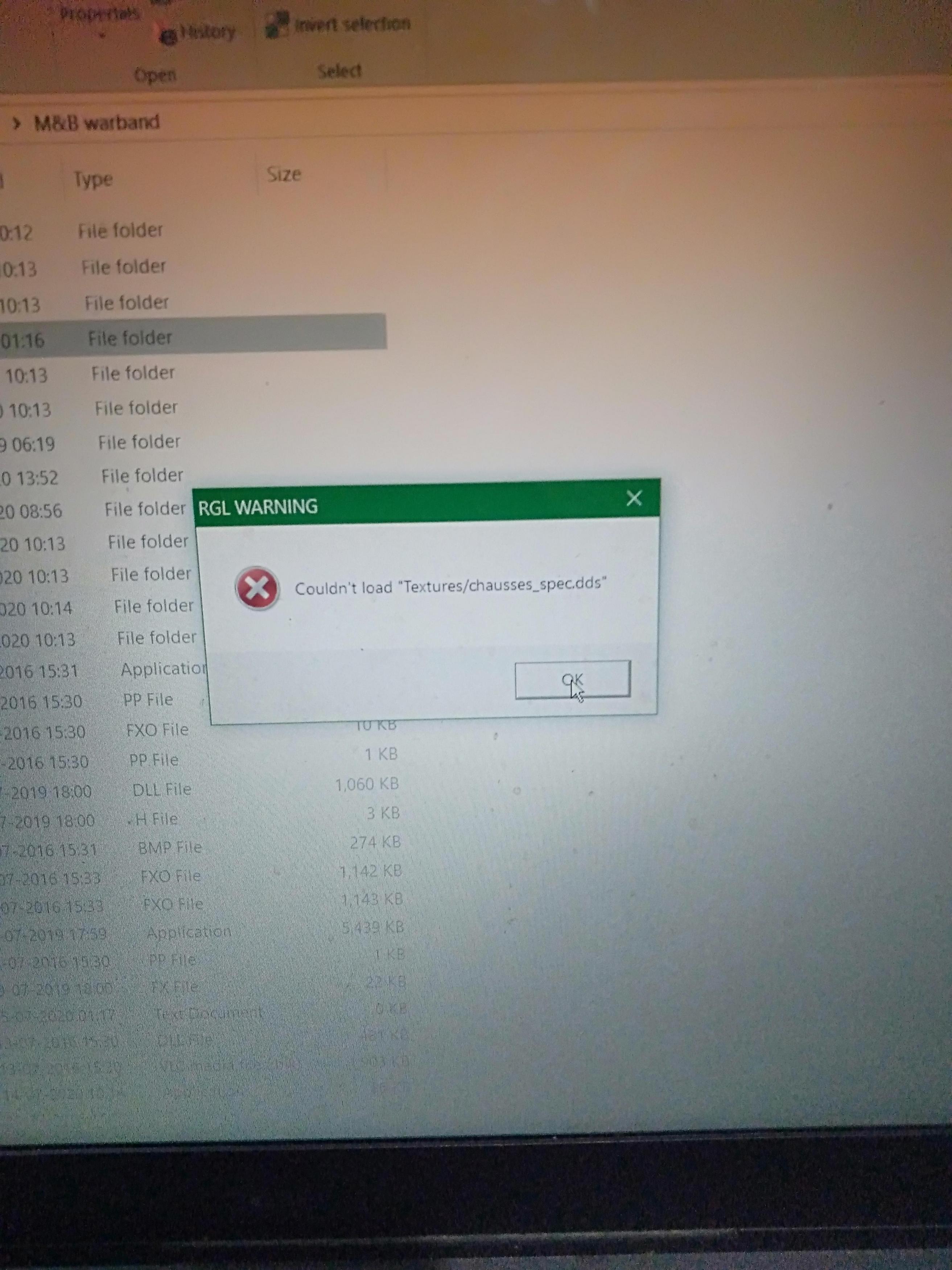 These are 2 more images.
1)The "strange script" I was talking about.
2) Textures error encountered.

Also, I can't check(put a tick) on "load textures on demand" in the configure menu of launcher.
If I try to do, it automatically gets closed.

Guys, i need your help, who faced such a problem.
When I enlist Lord's army, all the factions in the game declare war on the Lord's faction at once!
This happens on versions 3.3+and 3.4
Everything works fine on version 2.1.7-3.2
What can this be related to? Did you know about this bug?
Example

Game keeps on crashing on day 66. I dont know what to do, would love some help

Also any plans for this mod being made for bannerlord?

Pattable said:
The castle interior for Constantinople is way too small. It doesn't make sense that every other Byzantine city's interiors are great halls but the place called "Queen of Cities" only has a tiny dingy room. Does anyone know how you can switch Constantinople's castle interior to, for example, Nicaea's great hall?
Click to expand...

Make a safecopy of the scene of Constantinople's castle interior. Make a copy of Nicaea's great Hall and rename that copy to the name of the castle interior which you want to replace. There could happen sideissues though but you can try.

I really like playing the mod you make. After installing the 3.4 update, the character notes failed. When I enter the relevant menu
It gave an error like "click on a link to view the notes".

I am so sorry for my bad english. Since my English is not very good, I used translation

Could I have made a mistake while setting it up? I can't be wrong

Having a weird issue with the mod currently where I get no notifications in the bottom left of the screen. Messages, xp, damage, deaths/ko's, etc none of it shows up.

I have all the boxes checked in the options to show me the messages.

ReadsByLamplight said:
Having a weird issue with the mod currently where I get no notifications in the bottom left of the screen. Messages, xp, damage, deaths/ko's, etc none of it shows up.

I have all the boxes checked in the options to show me the messages.
Click to expand...

I have exactly the same problem. Anyone know a fix to this?

ReadsByLamplight said:
Having a weird issue with the mod currently where I get no notifications in the bottom left of the screen. Messages, xp, damage, deaths/ko's, etc none of it shows up.

I have all the boxes checked in the options to show me the messages.
Click to expand...

this seems to be inteded by the patcher, in moddb he says he removed the message log because of error flooding, I am trying myself to find out how to get it back but I am no modder.

I finally got some free time and decided to return to modding. I'm working on v3.5 which will be ready in a few days if things keep up.
I also made a discord for the mod: https://discord.gg/GvB2REENr2

KratosMKII said:
I finally got some free time and decided to return to modding. I'm working on v3.5 which will be ready in a few days if things keep up.
I also made a discord for the mod: https://discord.gg/GvB2REENr2
Click to expand...

thanks man, got the v3.5 up and running. still too early to notice anything majorly off. one thing I noticed right off the bet is the 4 Teutonic town merchants carrying baltic gear (culture #14 as opposed to #10). please disregard if it is so by design. As for me, I've used the savegame editor to change them to culture #10.
You must log in or register to reply here.