Well, one of the early Re's has 20mm cannons, so that puts it ahead of almost every other lowtier Italian fighter in at least one major area. I mean, according my memory and the wiki, it and the C.202EC are the only ones with 20mm cannons below BR 4.0. I don't know what the Italian aircraft designers were thinking. 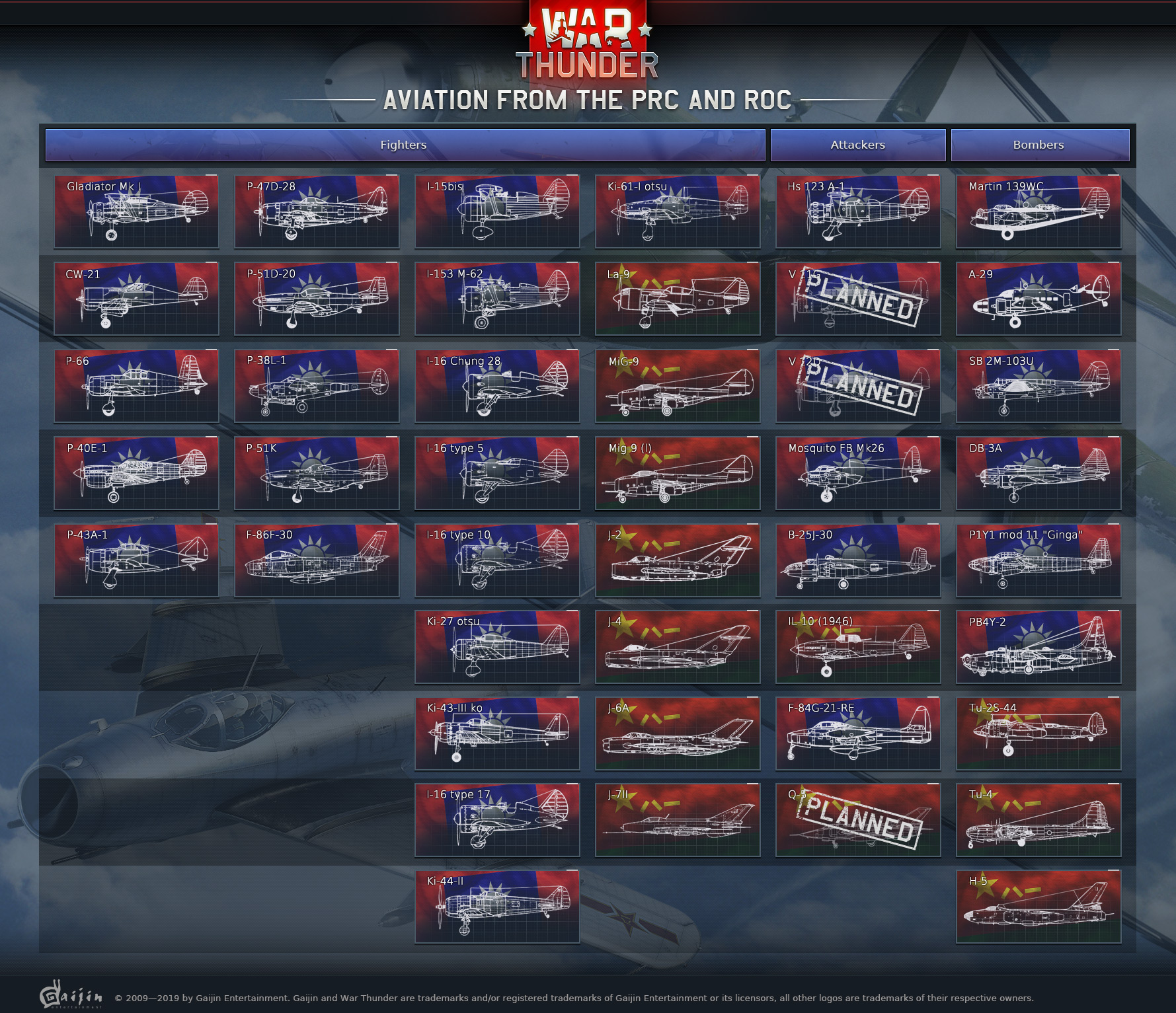 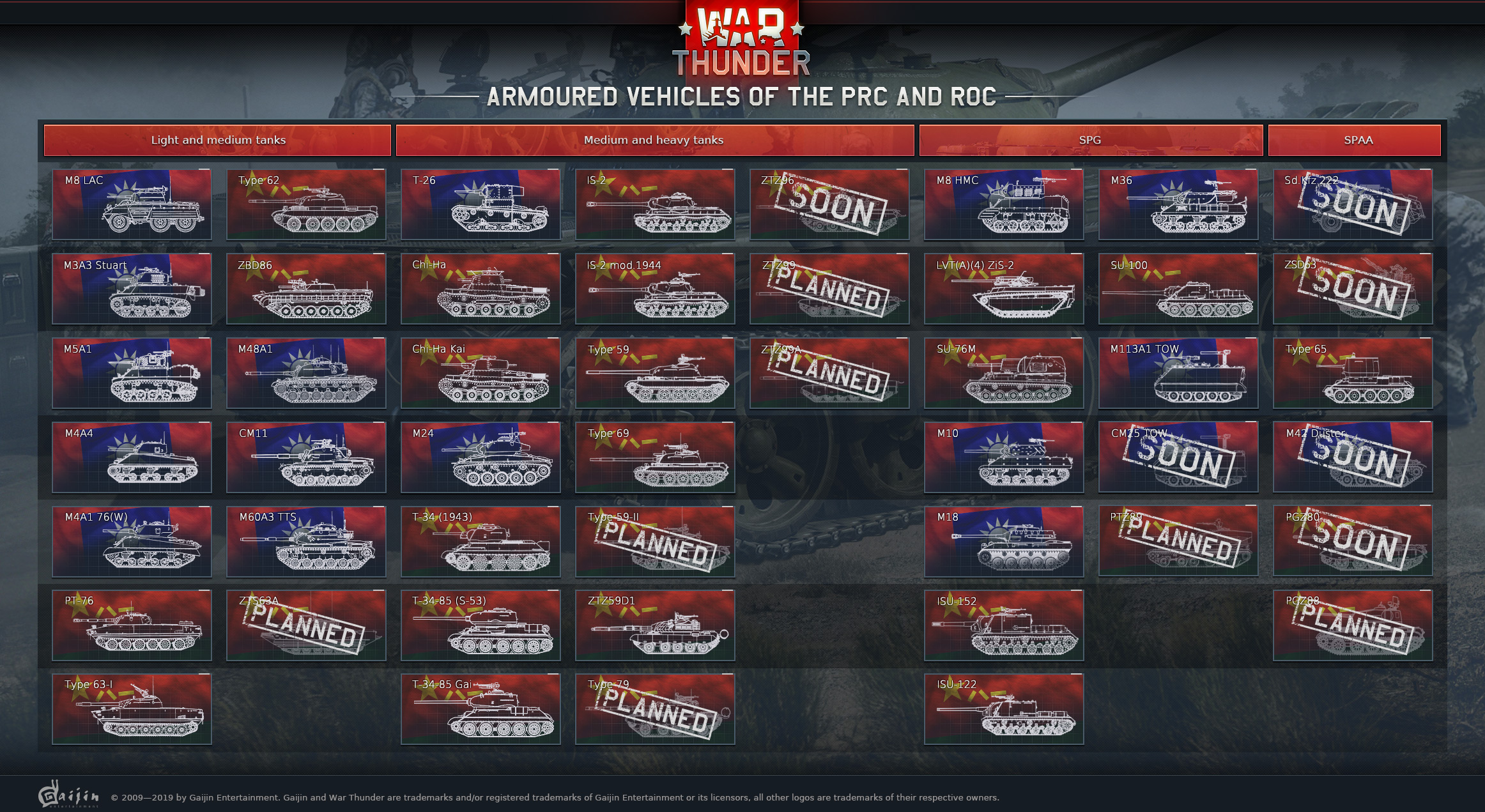 Less unique vehicles than a Hungarian or even Romanian tree would have... but probably more customers to milk?

China as a playable nation actually already existed on the chinese server for a while now. I guess the reason we didn't get it earlier was because it was not really unique???

It's still not really unique, but I guess they want to see if people in the Free World want to pay for some extra copy+paste skins too.

Because they'd actually have to make some new models then?

You know, I just thought of something. This Chinese tech tree means we're actually getting a bunch of WW2 vehicles with this update, for a change. Now I'm happy we're getting a Chinese tree.

I mean, I'm serious. I know most of them are copy-paste, but I'm so tired of the focus being on top-tier vehicles that I'll never unlock, that when at it that way I'm glad we're getting a bunch of WW2 stuff. The Cw-21, P-43, and P-66 are new for us, and I won't mind getting another set of I-15s and Japanese Ki's.

I don't mind the Chinese tree being copy pasta, but I am concerned all battles will essentially be mixed now due to China being mostly Russian and American vehicles.

Gaijin has been moving closer and closer to the World of Tanks model for a while now.

Bf 109G-2 (Italy) — The aircraft now has standard Hungarian Air Force camouflage. Romanian camouflage is also available. Both camouflages are available for free. Vehicle card and icons have been fixed.
Click to expand...

Already read that; I'm pretty sure the "new" camouflage will consist of the old German camouflage but with the (very basic) Hungarian roundels instead of German ones.

The new sound engine and recorded samples are an incredible improvement.

The new aircraft engine sounds are cool. They make dogfights feel even more chaotic IMO, when you get into a furball and you're surrounded by the roaring of other players' engines. I feel like it makes it harder to tell if someone's on your tail, but maybe that's just me.

Has anyone else noticed trouble with the matchmaker? Even when the game says there's 20,000+ people online and ~1000 battles taking place, there have been times when it's seemed to have trouble finding enough players to fill a match. I was even having trouble with that on Sunday, which surprised me. Does the game not have as many players as it used to, or is it maybe dividing its playerbase up too much between all the different gamemodes?

Also, there are times when this game makes me wonder why I even bother. I was doing alright for the first couple days after I came back to it: I had some good matches, and I was enjoying myself. And now my luck seems to have completely run out. A lot of the tank matches I've been in have been ****ing one-sided blowouts, most often with me on the losing team, and I've died a lot and accomplished little. I've had the same 'spawn, enter a fight, die, spawn, enter a fight, die' luck in a few plane matches too, which has pissed me off because that doesn't usually happen to me with planes, and I should be doing better than that. Like I said, I'm not sure if it's partly because I haven't adjusted to the new sounds yet and how the affect my situational awareness, or if I'm just having a run of bad luck, or if I just ****ing suck all of a sudden for whatever reason. Whatever the case, it doesn't look like my return to WT is going to last much longer at this rate.

Keep in mind the game is designed to lure you into the fold and then **** you in the ass so hard that you pay for everything afterwards. If you only play once in a while you get to keep the honeymoon matchmaker.

Having (or not having) a premium account doesn't affect the matchmaker... does it?

No, you just get garbage teams sometimes. Or fighting at full uptiers because black holes and compression.

Typical F2P lifespan. I guess this would be the terminal stage, and the subject is struggling to survive.

Ground battles have gone to complete **** but the late game jets are fun again after the latest update. Top tiers moved to 10.3, and some moving around at the ~9.0 area makes for nearly perfect subsonic jet matchmaking. I don't often give Gaijin praise, and I'm sure they'll **** it up again next update, but if you like playing Air Realistic, jump in now while there's some enjoyment to be had.