Medieval Battles & Sieges
The main purpose of this mod is to make more realistic sieges. Medieval poliorcetics were very rich and variated, therefore the linear Native's sieges have always frustrated me. All the more as the realism of those sieges could be enhanced by simply adding 2 or 3 three new features. Besides, I have always been compelled to adapt my military architecture models to Native's gameplay. I had enough, and now I want to adapt the gameplay to the reality of medieval architecture, or at least to make less annoying compromises between it and the reality.

The other main feature is to include several factions at 2 different periods: a pre-gunpowder one (late 13th century) and another with gunpowder (second half 15th century).

Your opinions and suggestions concerning the factions are welcome.

2: As making destructible props is too difficult and would cause aesthetic problems, I invented a simple but funny impact system described in this drawing:

When the projectile hit a collision body, it causes damages in a certain perimeter (in red). Therefore, the players who are in this perimeter are injured or killed (1).
It would give importance to the width of the walls. For example, this archer is in security behind his deep arrow slit:

Of course, the extent of the damage perimeter would depend of the siege engine. A trebuchet or a bombard would have a far bigger perimeter than a pierrière.
Otherwise, for a nice render, a dust cloud and some flying debris are sufficient. But the problem is the different types of materials. I mean, it would be weird if there are stone debris when a wood structure or a guy ( 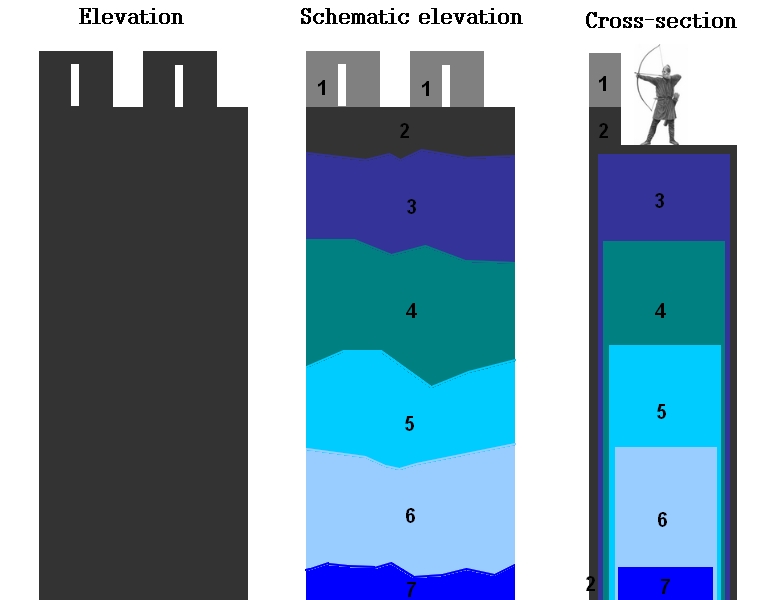 Each different colored part is destructible. Given their arrangement (see the cross-section), they will be destroyed in the order. When the part 2 is destroyed, ruined part 3 appears, and so on. The more the wall is high, the more it has different parts and thus the more it is long to destroy (this would act medieval French fortifications superiority out). But I have to find a solution for the merlons (1). Indeed, currently if part 2 is destroyed before them, they would ridiculously stay in the air. I am thinking about extending their collision body to the ground and making it prominent, so that they would always be the first part to be destroyed. Of course, some physics would prevent this problem, and even open us to very interesting and funny features such as sapping, but this is out of my skills.
Anyway, this system is the best and most reasonnable I have imagined yet. Besides, it is probably the best compromise between gameplay and aesthetics.
Bretèches, hoardings and bartizans will be destructible too. But no tower will be entirely destructible (only their bartizans, bretèches, hoardings and merlons if they aren't roofed will be).

3: It would depend of the number of attackers on the ladder and the number of defenders. If the attackers is alone, facing 5 defenders who push the ladder where he is, he would have no chance to avoid the fall (and, therefore, perhaps death). But I'd like it to be rather difficult for the defenders, othewise defending castles would be too easy. 5: It is ridiculous that an attacker is in security at the bottom of the walls. Unfortunately it is the case in Warband. A stooping animation would enable the defenders to kill the attackers who are just near the walls.

I think it is easy to code thanks to the javelin throwing animation.

7: This class would be usable by only one player at the same time, and has only one life in sieges. The lord (or count, amir, etc. it depends of the factions) could encourage his teamates by warcries or things like that. Concretely, it could make the teamates less vulnerable for a short time or something like that.

8: More or less the same as the Lord class, but with more religious (religious words with a Quran or a Cross in the hands, things like that).

9: New sounds will of course consist of new sound effects (swords clash, death cries, etc.) but I have also an idea for the ambient: invisible objects which emit a sound. It could be wind at the top of towers, weird noises in dungeons, waves sound on the beach...

10: To my eyes, maps have always been the weak point of Mount & Blade. Most of the time, they look unrealistic and their scene borders are simply awful. Therefore I think this is one of the main things I have to change, totally. I would like to make totally new landscapes, realistic and reflecting the regions where the scenes will take places. It is possible that each scene has its own scene borders. Concretely, there will be:
- new flora
- new scene borders
- new textures
- new skyboxes
- horizons
- the invisible objects which make a sound
- and why not some weather effects (rain, thunderstorm).
Concerning the big town scenes, this is what I plan to make (in this case for Constantinople):

11: The fact that there is no North African/Middle Eastern and Black African looking faces in Native is particularly annoying. Iboltax has made some good textures for that, but unfortunately his head model doesn't fit the helmets made with the vanilla head model.
Screenhots :
Architecture 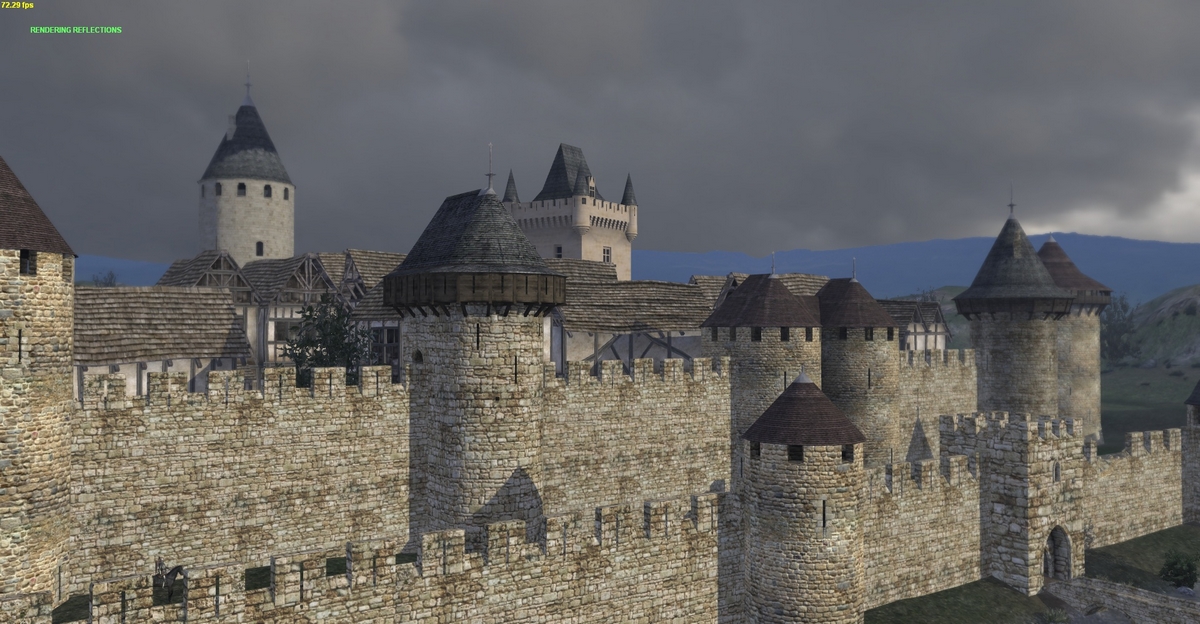 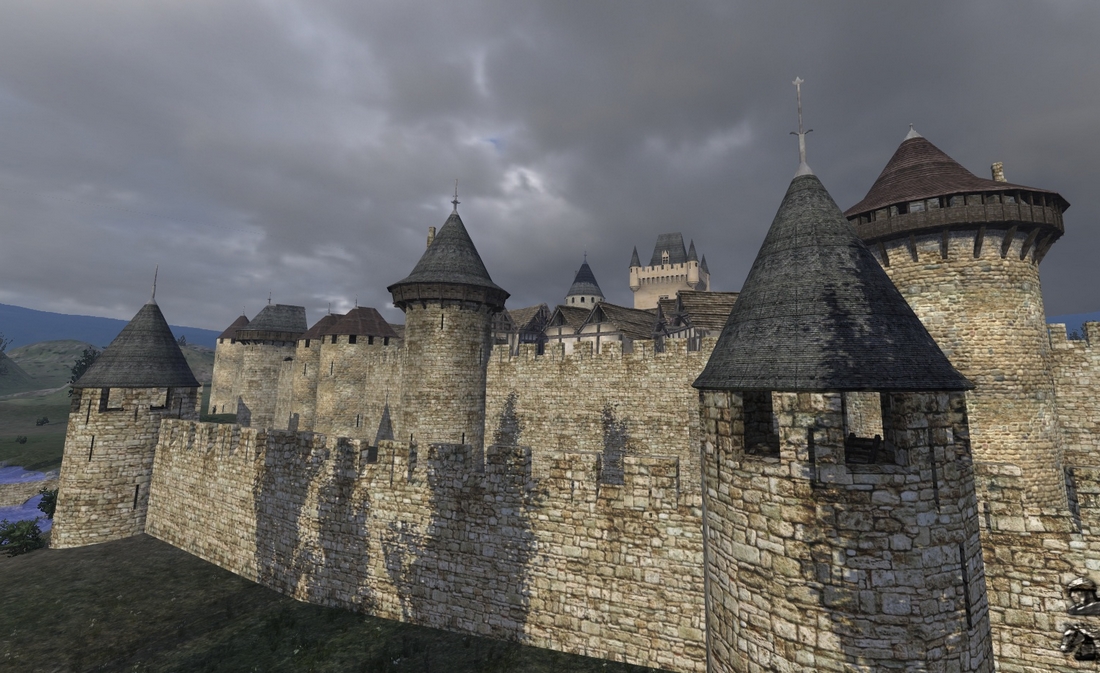 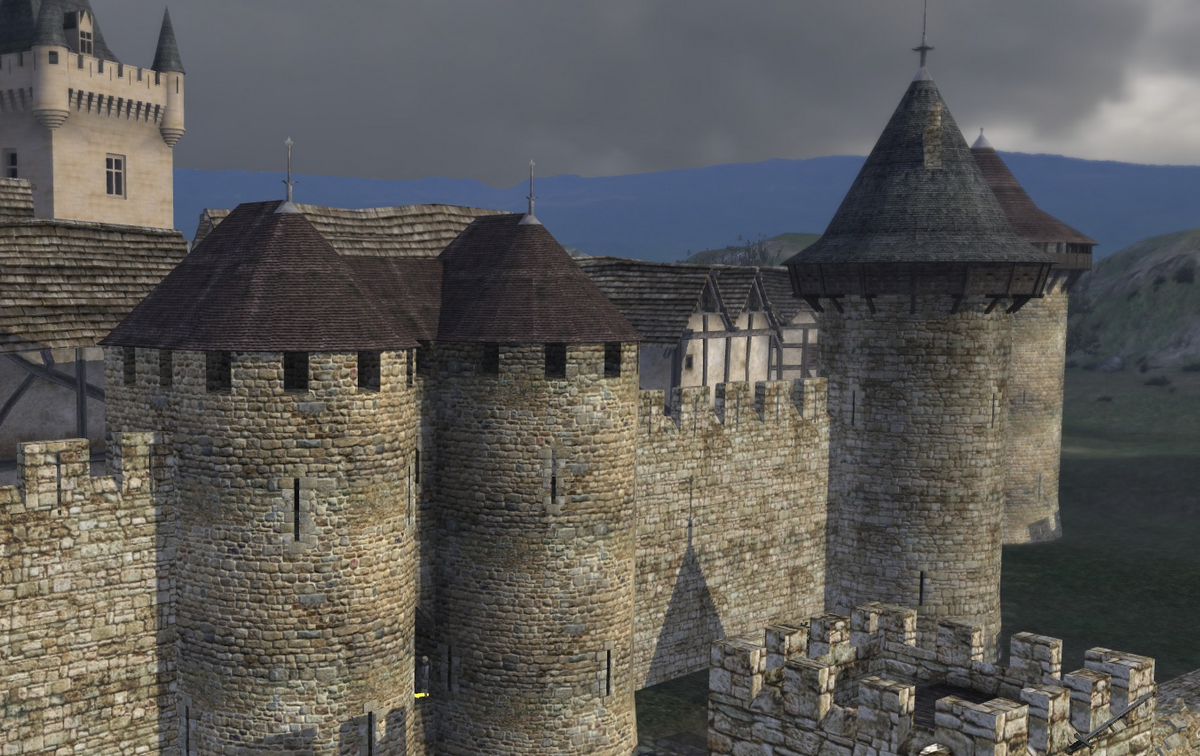 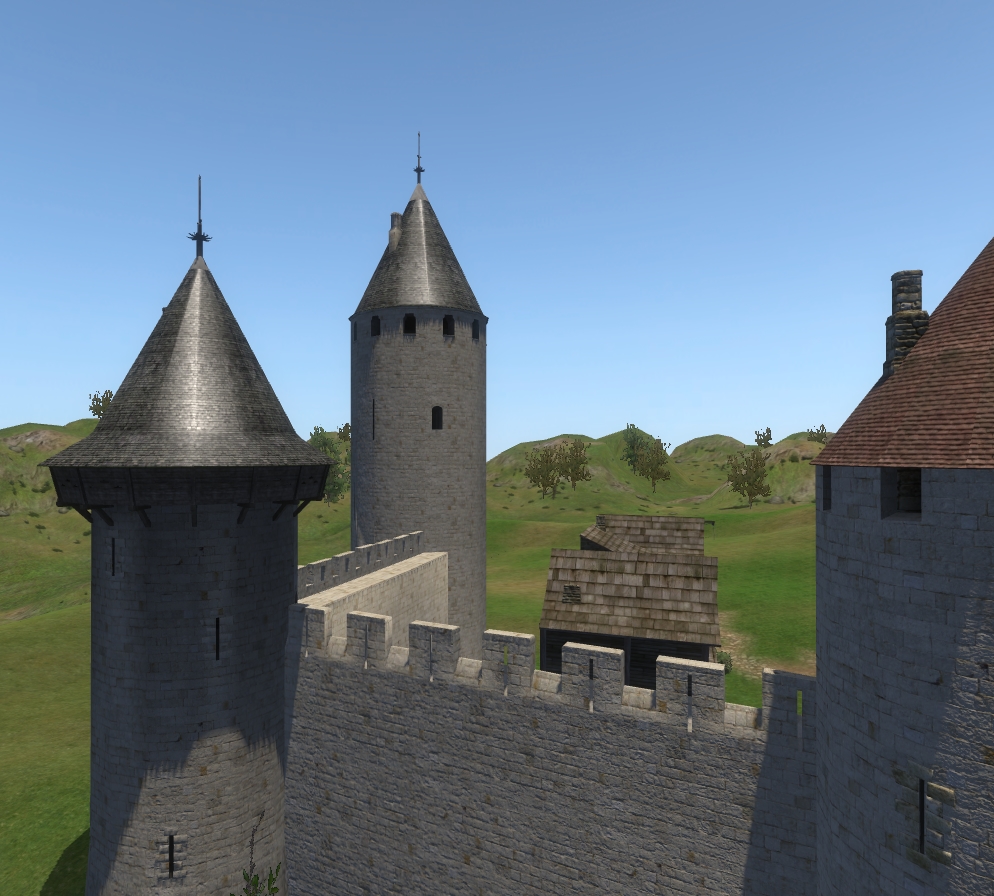 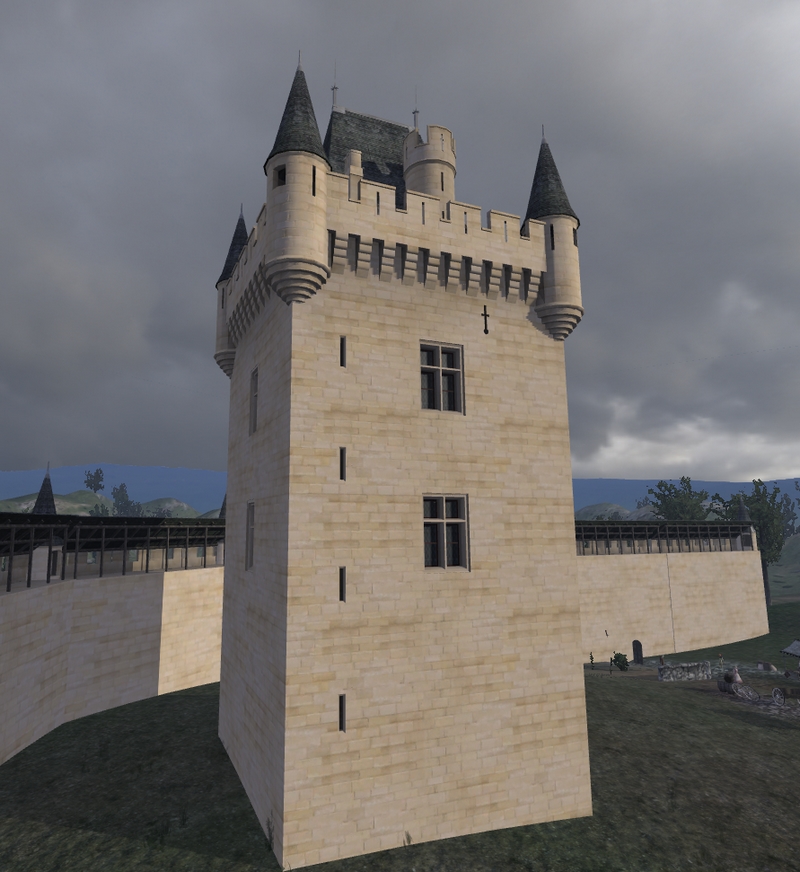 Any help, critics and suggestions are welcome. I am good at modelling, but rather bad at texturing and a total noob at coding. So texturers and coders are particularly welcome. Also, as the community has already produced a lot of interesting OSP animations, scripts, etc. one of the easiest way to help me for the moment is looking for OSP stuffs that would do the job for the planed features that I exposed.
Otherwise, I seriously need architectural drawings, especially elevations and cross-sections. An elevation is a view of a building seen from one side, a flat representation of one façade, like that: A cross section represents a vertical plane cut through the building, like that:
Thanks to God, in France we had the famous architect and historian Viollet le Duc, who demised an incredible amount of work concerning the Middle Ages, including hundreds of architectural drawings. But for other countries' monuments, it is more difficult for me. I hope you could help me with that.

Each faction will have 8 classes. All Western European factions, including Arab Granada, will have similar classes: a footman, archer, crossbowman, knight, special unit, king, religious agent and a musician class. But according to the faction, these classes will be more or less effective. For example, a Castillan archer will be far less effective than an English one. Concerning Eastern Factions (Mamluks and Byzantines) things will be slightly different.


Notes: "m" means mounted by defaut, "h.d." (horse disponible) means that the unit can have a horse but not by defaut and sucks at mounted combat (so it is rather for displacements).

Ah, finally, a mod that spells detail more so than any other mod. Siege has been one of my most favourite game types in Warband.

I wonder if you're currently hiring any modellers for this project.

I have never been a big multiplayer fan, but that is gonna change when this mod comes out.

I was following that de près in the forum francais ,began to be sad cause it seemed dead.but infact it's not , even seeming more serious than
a lot of others works .After all bryan won't annoy you there  (je peus aidez c'et poure kan)
Anyway You can be sure to count me as "supporter" ,even that I am not a well multi-player.

This my friend is a master peice will it be out for multiplayer too?

@ Johao, you mean if I am looking for modellers or if I have already hired modellers in my team ?

@ Tcherski, this is vicious, poor bryan

@ Wu-long, this mod is only multiplayer

These sound like very good features Mansur. Keep up the fine work!

Good look with the mod

Johao said:
Pardon me for not getting my post right.

@ Johao, you are welcome The mod represents a considerable amount of work, therefore the bigger the team is, the better.

I am above all looking for texturers and coders.

I edited the second post, with the planed siege scenes. I'll soon add the details of the factions.

good luck and my your mod never die,if you need a hand modleing just call

If u make this 100%,including destructible props and boiling oil and such, u're the best!

Johao said:
Pardon me for not getting my post right.

hey if you are looking for a team the falll of rome mod needs more people
Click to expand...

Sorry, hudson, but I'm not a fan of the Roman empire.

Still, I wonder if there would be an 'invasion' mode of siege warfare, hundreds of bots climbing up ladders or breaking down doors while a small group of defenders try to keep them away from an allied lord bot, which can be a nice co-op alternative and frankly, more dynamic towards other invasion mods with the new siege elements. But frankly speaking, that would be a feat of an accomplishment to code the spawns and placements considering the ingenuity of the A.I in warband..
You must log in or register to reply here.