Welcome to this video AAR (After Action Report), or let's play M&B: Warband as a video series like this is more commonly called (AAR usually refers to written story/narrative, possibly supported by screenshots and other images, while let's play is gameplay videos with commentary).

This let's play has been completed and the whole Calradia was conquered, so this post is no-longer updated. However - feel free to leave comment, feedback and/or questions if you have any. You can always find all the videos and the complete playlist from YouTube...


Violet's Tale: This let's play is the journey of a young nomad woman adventuring in the land of Caldaria,
dreaming of her own kingdom and making name for herself, trading and fighting for fame and fortune. 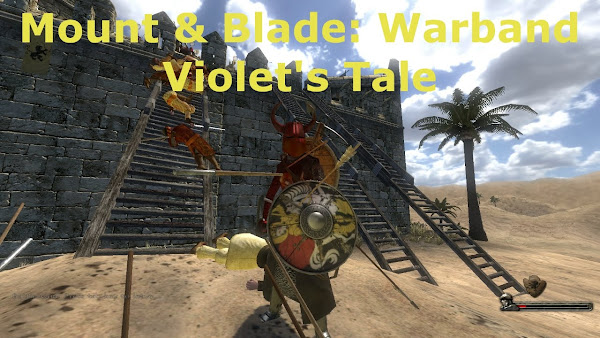 180 hours of slow-paced Warband gameplay from the very start to the very end (controlling whole Calradia).
COMPLETE playthrough with a female character (commoner) and using the hardest possible settings.

The whole series was played as ironman, I only saved and reloaded between videos.

I like to watch let's play videos (gameplay videos with commentary). I found some Warband let's plays, but they were mostly about goofing around and I had few good laughs, which is awesome, but I wanted something more. I wanted "hardcore" Warband.

Everyone I found seemed to play the game with the easiest settings (reduced damage, etc.), just riding around and killing everything without any challenge. I found that extremely boring to watch. I couldn't find a video series where Warband was played the way I like to play it and it made me think...

Maybe it's because I was twice as old as most of those who were making videos or maybe I didn't look hard enough; I don't know, but since I couldn't find a series I liked in YouTube, so I started my own...

And since none of the let's plays I'd watched featured a female character, let alone female commoner...

I found original Mount & Blade from my hard drive couple of weeks ago (bought it back in 2006), got hooked again, and went on to buy the Warband (while waiting for w/F&S). While at it, I decided to start a let's play, AAR or IAR "In Action Report"

I prefer the commanding / tactical role over front line fighting. And I also like trading, a lot. That doesn't mean that there isn't fighting and battles in the series, but that there's more trading than most let's plays (I've seen).

I started with the auto-block on, but after the early videos, went for manual.

I ended up playing on the "hardest" difficulty, with settings:

Episodes 1-23: Started the series with no mods

About This Let's Play

I'm started as a female commoner, called her Violet. Violet was a hunter, a steppe child, a game poacher with the wanderlust background - The plan was to be mainly a horse archer, with outriding/skirmishing battle style (when not commanding and overseeing the tactics).

In the end, the goal is to get Violet her own kingdom and eventually, capture whole Calradia.

I like the trading part of the game, so there's plenty of that. And that's all part of the process to get enough money to support armies and the kingdom when I get to that point...

Here's the link to the playlist and little "trailer" I made for fun after the first couple episodes:

Some Milestones Along the Way:


Join the journey and feel free to post feedback in this thread or in the YouTube comments.

Violet is at level 24 and we're at episode 46 where the second war while she's been a Sarranid vassal started: E046 Let's Play Mount & Blade: Warband - New War, Two Sieges

There's 52 videos in total with 29 hours of Warband on the playlist, and there's more to come as the grand goal of getting Violet her own kingdom still stands

After hearing about Warband, I wanted to see some game play and typed Warband (long videos) into extended Google search. Sure enough i came across your series. It was exactly what i was looking for, basically an endurance run. Actually i watched like 30 episodes before I started playing.

I'm bummed out a little that you don't like sieges. It's just a hilarious turkey shoot with archer companions... and if you make a second sharpshooter control group i.e. (2) archers, (4) elite x-bowmen, you can set up a crossfire, so defenders at the top of the ladder in some castles will always be shot from the side of their shield. It's brutal.
While increasing battle size is a great way way to get those large campaign army battles over with, it just may overcrowd the castles and chokes. Also the only mod this game really needs is more mission variety.

Anyway, thanks for making those great videos. Lastly, what screen resolution do you use to capture footage?

Cuir Mustache said:
After hearing about Warband, I wanted to see some game play and typed Warband (long videos) into extended Google search. Sure enough i came across your series. It was exactly what i was looking for, basically an endurance run. Actually i watched like 30 episodes before I started playing.
Click to expand...

Good to hear, I'm happy you've enjoyed it. I like to watch let's plays myself, and I've watched several Mount & Blade / Warband ones too, but I didn't find any that was more "serious" and that would "endure" through the game shooting for own kingdom - so I started one myself...

So yeah, it is quite an endurance run (both to play/record and watch that many episodes)

I do like sieges And as defender a lot more than as an attacker, but I've probably said more than once on the videos that they could be a lot better - the single choke point is a bit silly (Although fun as you said when defending) - but we play with what we got (good tips on extra grouping thou, that I haven't messed too much with, apart from 'Support' group for medics etc)


Cuir Mustache said:
While increasing battle size is a great way way to get those large campaign army battles over with, it just may overcrowd the castles and chokes
Click to expand...

This is true. Big battle size makes awesome battles on the field, but silly for sieges (as AI can't manage the choke point really well, and it gets worse with more troops there). I like the diplomacy mod, and that's all I need, even that it will truly kick in with fiefs, castles and towns and even more with own kingdom.


Cuir Mustache said:
Lastly, what screen resolution do you use to capture footage?
Click to expand...

Violet is now level 26. Lately she's been sending companions to spread the word about her ambitions to become a Queen and steadily increasing her right to rule. She has industries in every town in Calradia, which bring in steady profits every week, so she's been able to focus on warfare and training troops.

I'm taking my time with the game, since that's the way I like to play and I'm happy there's been people who like to follow Violet's journey...

There's 65 videos (58 episodes) on the playlist with over 40 hours of gameplay at the moment, making it one of the longest on YouTube (and it's far from over). Also, since episode 24, the videos have been around 45-60 minute long, which are quite rare for M&B...

There's still plenty to go before Violet gets her own kingdom, and that's when things get even more fun, so I'm looking forward to that.

Aye, I'll take the time to watch this.

I'm a big fan of the trading aspects as well - I just found this, but will be catching up on Violet's quest with great interest!

Violet is closing in on level 30 and she's just waiting for the opportunity to rebel against Sultan Hakim and start her own kingdom - and at this point, it shouldn't be too long ahead...

Violet has enough wealth and income to support her kingdom when the time comes and she has the right to rule to make it work. She's been patiently training her companions to serve her for greater good, some as her personal bodyguards, some as future vassals of her kingdom and some as diplomats and politicians.

If you haven't checked out the videos yet, now's the perfect time to do it.

Anyway, you can easily get on board by checking the latest episode or two (and then if you have the time, check the "archives" for more)

You can find all the videos here: http://goo.gl/kp6c5 (the playlist)

I've been watching your M&B videos and following Violet's story for some time now and I'm really enjoying it! Keep it up!

I havent watched this yet, but i will when i feel like it.

I've been to this topic a few times in the past few weeks and havent felt like it.

diavel said:
I've been watching your M&B videos and following Violet's story for some time now and I'm really enjoying it! Keep it up!
Click to expand...


cypruss11 said:
I havent watched this yet, but i will when i feel like it.

I've been to this topic a few times in the past few weeks and havent felt like it.
Click to expand...

Heh, I appreciate the reply anyway

In episode 82 (just posted yesterday) Violet renounced her oath to Sultan Hakim (when he finally refused to give Violet a castle) and started her own kingdom. A new chapter in the tale begins and things get a whole lot meaningful with her own kingdom on the line for every battle and war.

(edit: added quote/reply and the link)

Go on with the great job! I am following this from Ep 28!

Rangingorcs said:
Go on with the great job! I am following this from Ep 28!
Click to expand...

Aye, there's metric ton of Warband to watch on this let's play, I believe it's the longest series on YouTube - as far as hours of footage goes

Things are looking a bit better for Violet's own kingdom and we'll see some nice progress in the upcoming episodes.

p.s. Playing with a strict no-reload policy makes Warband much more interesting, so I recommend that to all single-players, even if you're just playing on your own.

Violet's kingdom keeps growing. She now controls Khudan, Ichamur and Narra, and more will come as the wars against the Khergits and the Sarranids continue. Vaegirs and Swadians are more, but Nords and Rhodoks are a big threat, and Sarranids and Khergits are still very much alive, so she has a lot of work to do before she controls Calradia.

Zemalf I found you series before this topic came up but unforetunatly I do not have the time to spare to watch all the episodes to catch up let alone the 2-3 hours of videos you upload at a time.

Is there commentary?
You must log in or register to reply here.

Nov 8, 2021
Doofus
Lord betrayal spam and long cooldown between empty fiefdoms being assigned to a lord