now that the modules (sort of) are out, I am curious on what kind of submods and features you would like to see in the game.

Important: This is about ideas/suggestions, not about feedback on the game itself. Keep it clean please =), no discussions about other players ideas.

Who knows, this could be used as inspiration for community releases in the future

Submod: list what you would change in the game (tweaks), including things you would remove and others you would just like to tweak/change.

Feature: short description of a new feature (for VC RE), what is your inspiration (a movie, another mod or game, ...) and how it fits with the game setting. Can be something new or old (like a Freelancer type feature)
Remember that a picture is worth 1000 words (include them if can)

I will start with a easy one

Short description:
Based on @Rubik work it is possible to add a nice presentation/UI that represents the worldmap. It includes kingdom view and 3 new modes:

Factions Mapnode: each faction represented in the map
Religions Mapnode: showing which areas are pagan or Christian
Diplomacy Mapnode: shows the relations of other factions with you - if king - or your faction - if vassal.
Fief Mapnode: shows if a fief is ok, under attack or if it was looted
Click to expand...

Outlaw play expanded
Expand the players gameplay as a bandit, be friendly with bandit factions, more options at the bandit lairs. That kind of thing.

Allow the player to join any fight between two parties but lose relation with those they attack. So a chance to become neutral to bandits.


Bandit lair access dependent on bandit faction relation (not honour/reputation).
Disable bandit factions losing relation if they are the aggressor when attacking you.
Allow bandits to aid in fight if relation is high enough.

An actual scene for visiting bandit lairs, with slave-trader and other NPCs. Example:

Different one for each lair-type?

Mission to steal a ship from a coastal town (high difficulty).


Maybe do all this for Slaver/Manhunter faction?

Ok this developed into a not very short post, will spoiler it...
Inspiration
Brujoloco's bandit expansions for repolished were very nice. Plus lots of players like to play primarily as a viking, so should be popular.

More music! The current tunes are not bad but they are too few and get really dragging after a while.

More depth in relation to culture and religion would also be nice, say yule celebration (sacrifice prisoners !!!, or xmas for Christians) . Anything that adds more character to the game really, so that every day doesnt feel the same.

Created your own religious center on the map, with religious parties spawning to help convert settlement. Change the troops of a fief based on religious composition (pagans are the majority= norse troops for example).

Would love to see a way to fight in lord's army and climb the ranks until you either become a trusted companion or gain the right to become independent party leader (vanilla merc) to give an early game way to gain renown and combat exp.

Another addon feature from my old pack:

It displays the relations between your companions (who likes who, etc) in a cool interface.

It is savegame compatible (so works for your game, it does not matter when you start it). Lists you get from the forum only apply to specific game versions. 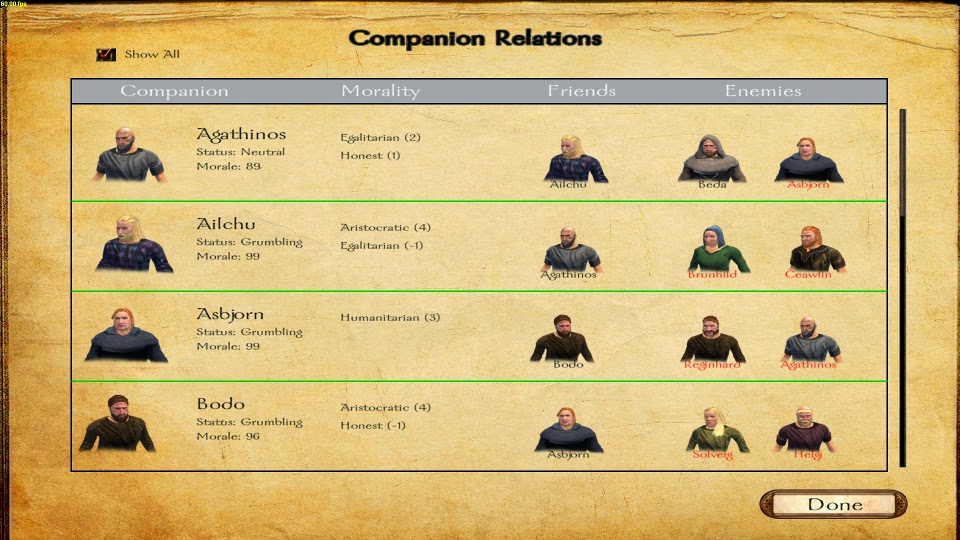 I think a description is not needed.

This is a mod in which every single troop in the player's army has a persistent identity. They have a name, face, equipment load-out and origin information that are generated on recruitment and will persist over time. They also have stats that are updated with each battle. While all troops are unique, they still remain together in stacks in the player's party (so if you have 50 Swadian Knights, this will still show up as one stack, but all 50 will have their own unique name and info).
Click to expand...

This is under construction (no MS released yet), and requires WSE, but the author is attempting to make integration with other mods as easy as possible. I've played it and it works well, really adds to the game. A feature to keep an eye on for the future.

Add another morale drop to a party that loses more than 75% of his men during battle, even if it doesn't happen in a short time.

If possible a rework of the lair scene so you can see your boats in there (provided you can bring them of course). The actual scene as a small river I guess it can be extended ?

Perhaps a very short custom quest to get a Karvi in early sandbox, maybe from a special location ?

The ability to request permission from your vassals to build in their land, and then be able to build fief improvements in their land.

Manpower feature for player and AI.
TLDR: number of people is limited. If you kill too many soldiers from the enemy, they should not be able to just get more and more. Destroy the land too!
inspired by Paradox games and 1257AD Lances.

- every faction lord has a manpower slot that saves the available number of troops that it can recruit
- it increases every week depending on: fiefs (village/castle/town) prosperity
- every lord gets a free amount of troops (30 ish) so they can at least fight bandits
- troops also cost money, so a poor lord wont be able to raise more than 30 man

-> Why:
- economic wars. If you attack a enemy faction fiefs it will destroy theirs economy. They will get less and less manpower every week. So once you defeat their armies in the field, they wont be able to come back at you over and over.
- several enemies: you could attack the fiefs while another faction takes your enemy armies down.
- it gives a new balance to the world.
-> lords without fief will be capped at 30 troops. So a faction with more lords than territory wont be able to field huge armies
- player is under the same rules. So you better protect your fiefs, and help your vassals/same faction lords too.

... more stuff to think about it 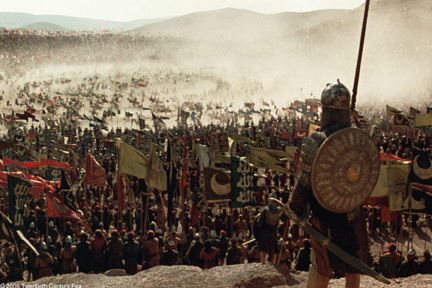 This would not be historical appropriate, as traditional tournaments are suppose to happen only in a few centuries... but they are fun!

Important: you can use your own weapons/gear (if appropriate type), or you receive a generic one (like a spear if you don't have one)

1) Noble tournament: nobles from the court, or elite soldiers (tier 5) with horses

--> random, so you could get either type in a town
--> best rewards
--> you need high renown or to be a noble to join it

2) Warriors tournament: open to all
Similar to above, but no horses.

3) Ranged tournament: open to all
Free for all fight, where fighters may have any ranged weapon (slings, xbow, bow, javelins)

Important: game AI must be fair to avoid several bots attacking the player. Targets must be spread out even on a free for all.

I would really like to see a feature added that lets you permanently kill enemy lords, as this was in brytenwalda it was one of my favorite features and i believe the only mod which lets you kill lords in MnB.

I really enjoyed playing as a danish pirate who would kill any lords he captured as he raided up the coast, with the ultimate goal being to kill everyone who doesn't join you.

A few more ideas that came along while playing

More beards, hairstyles and skins (for tatoos), that always get the pleb happy

+30-40 relation bonus with the relatives of the girl you marry so they really become reliable once you form your own faction. That way it's not just the girl traits that matters but also her family connections.

If feasible more battle events : when the ennemy sallys out in sieges it would be great for example to actually play a small battle with a massive battle disadvantage but no real consequences if you lose (except casualties of course), instead of having a cpu calculated battle.