So yeah Unqid died of "natural causes" at age 53. 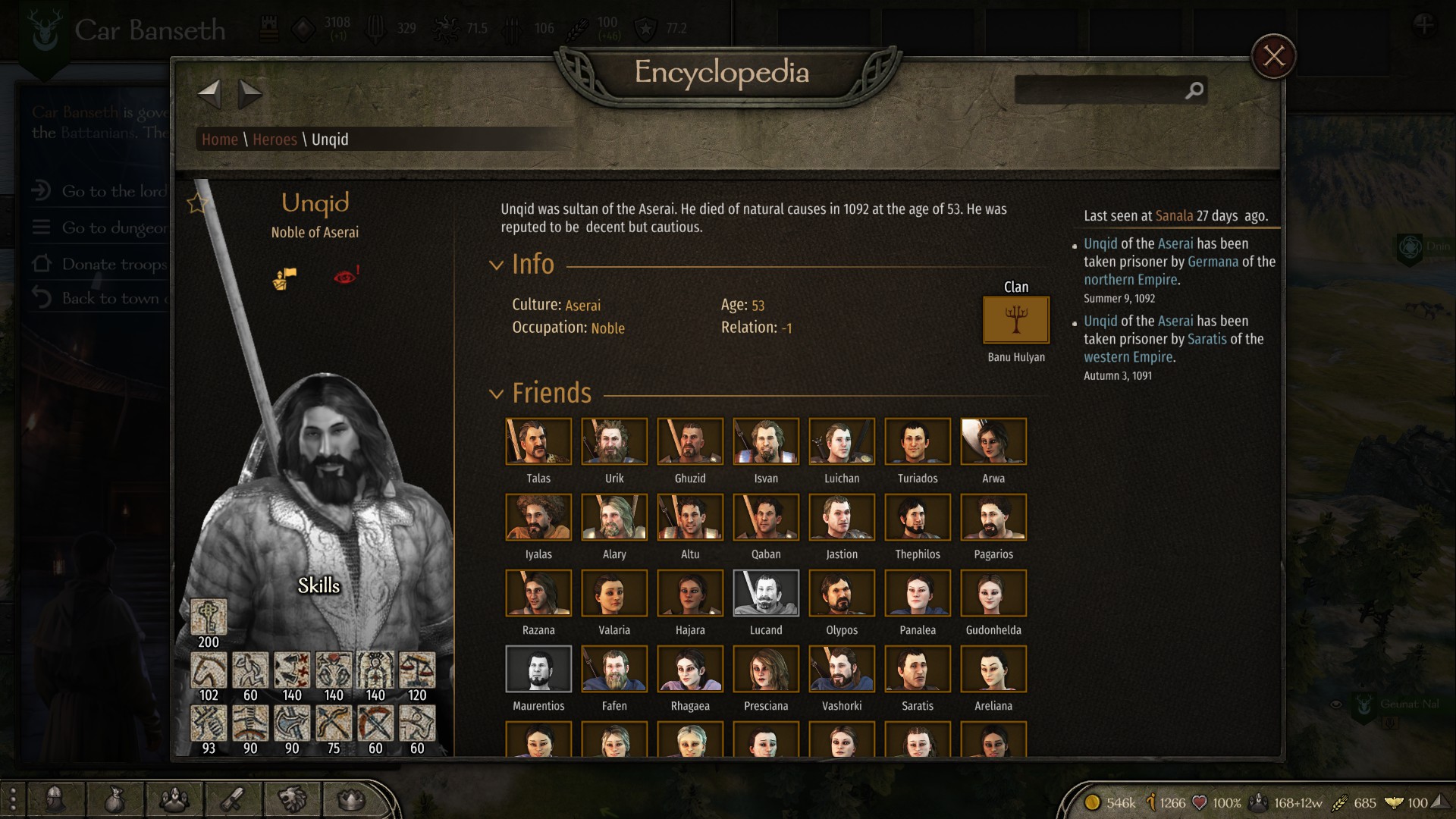 Don't even think I got to talk to him about the main quest LOL.

Granted may he had cancer or some sort of illness, but IDK isn't 53 a bit young to be keeling over? I mean he's the Sultan too. Wouldn't the nobility generally live longer then most due to better diet, actual beds, and access to medicine/physicians?

And yes I know back in the good ol' days people had much shorter life expectancies i.e. most people were lucky if they lived to be 60. I guess my concern here more is that are my Characters just gonna up and die at age 50? Doesn't leave much time to raise kids to take over for you. What about companions and clan members? So now it's a bad idea to recruit anyone over the age of 30? Seems a bit age discriminatory, thank goodness the starting age is 22 now I guess.

I mean I'm okay with people croaking at age 60+, as that seems a bit more reasonable and expected to me. (Given the setting I'd expect the average lifespan for Lords to be 65.) I might be okay with early deaths, but only if they are intended counter to high birth rates. Obviously having too many Nobles at once could unbalance the game and especially if there's disparity between the Kingdoms. But something tells me this was just more RNG.

Yeah i think around age 50 they start getting a daily RNG to die of old age, same for the MC as well.

Blood Gryphon said:
Yeah i think around age 50 they start getting a daily RNG to die of old age, same for the MC as well.
Click to expand...

47 is the earliest but it is very unlikely to happen.

I think this is fine, 50+ RNGs for death every year is pretty cool, though it should be a very low percentage with a gradual exponential increase the older you get. Don't want Mount and Boomer Boomerlord lol.

What is annoying is that while yes, the main quest sucks, the fact that you cannot complete it if too many of the Lords you need to talk to is annoying.

LuciusDomitiusAurelianus said:
I think this is fine, 50+ RNGs for death every year is pretty cool, though it should be a very low percentage with a gradual exponential increase the older you get. Don't want Mount and Boomer Boomerlord lol.
Click to expand...

That's how it already works.

Apocal said:
47 is the earliest but it is very unlikely to happen.
Click to expand...

Jeez... I better make out my Will before leaving the Training Camp.

How in the heck then were Roman Legionaries expected to serve until they were 50 then?

scarface52 said:
That's how it already works.
Click to expand...

I thought all the Boomerlords disappeared when the plague happened. I mean isn't that why all the banners are missing and we have to find them?

Anyways... so can I like father some illegitimate children with a barmaid or something? Cause if I ever did a no-reload playthrough don't think a single character of my own would ever manage to get married. Ack Calradia better not have Child Support.

So, for Bannerlord's nobility, with most lords dying of age in their late fifties, life expectancy is rather on the low side, even for the time period.

My first character who died, died at the age of 48. I was none too pleased, as I united the Empire, destroyed all who opposed us and was just sitting and waiting for Rhagaea to snuff it, so I could become the emperor.

Bluko88 said:
How in the heck then were Roman Legionaries expected to serve until they were 50 then?
Click to expand...

Because they served IRL and not in BL the game, so if some died before that point, no one cared.

he was poisoned, this is part of the new diplomacy and conspiracy update, borrowed from Crusader Cucks 3

So, for Bannerlord's nobility, with most lords dying of age in their late fifties, life expectancy is rather on the low side, even for the time period.

Rome isn't necessarily the right comparison, but even so - average life expectancy even if removing child mortality was only late 50s, not 70s/80s - but that would factor in those dying in wars, etc. But to use that model, half your children should die in childhood too. And the game doesn't provide any method for someone to decline as they age either (chronic illness, senility, etc.).

I'm fine with the relatively early natural deaths but I think children should become adults (ie. active characters able govern, lead parties etc.) at an earlier age, 18 seems too high. It varies by time and place of course but overall it wasn't uncommon for people in their mid-teens to be taking on what we would consider adult responsibilities.

Yeah, it's strange to see the modern eighteenth-year adulthood standard imposed on a medieval context, in which I'd expect my siblings to join my party when they're sixteen. And when it comes to marriage, girls would often be getting married even earlier; but I suppose that's a sensitive subject in modern Western society.

Speaking of siblings in my party, anyone know how to mod the game to make my siblings able to join my party at sixteen instead of eighteen?

Am I going crazy? Nobody looks old anymore

We need to talk about prices