I know there's a lot of Turkish users here so if any of them could shed some more light on it all.


optLn said:
Here's a guy explaining nicely what and why we are protesting in English:
http://www.youtube.com/watch?v=aEapNRakzDI&feature=player_embedded#!
Click to expand...

Whoa, okay.
Didn't know this was going on.

There's a Thread on Reddit that has some more "information" but I don't know what to trust there to be honest.

Sounds like a mix of Religious/Political tension and excessive force from the police.

It seems the Turks should learn the meaning of "lynch mob".

Some bloated figures in blue uniforms hanging from lampposts would do wonders for in the way of aesthetic appeal for the city streets.

rebelsquirrell said:
It seems the Turks should learn the meaning of "lynch mob".

Some bloated figures in blue uniforms hanging from lampposts would do wonders for in the way of aesthetic appeal for the city streets.
Click to expand...

Almost too grim, I'd say.

In any case, I'm really quite surprised by the Turkish response of closing their media. He who has something to hide, hides.
Maybe I don't know the Turkish government enough then.

rebelsquirrell said:
It seems the Turks should learn the meaning of "lynch mob".

Some bloated figures in blue uniforms hanging from lampposts would do wonders for in the way of aesthetic appeal for the city streets.
Click to expand...

Would being sodomized by a cactus please your sensibilities more?

I sincerely hope that this marks the end of the current Government.  I suspect this news will get a larger viewing worldwide over the next couple of days, given that worries about this kind of thing happening have been present for some time now.  It's pretty apparent that the people have been pushed about as far as they care to be pushed.

It's so sad that it's coming to this, though.  But it can't really be denied; ever since the Islamists took power, Turkey's become less open, less free, less transparent.  In a global economy, it's the equivalent of putting on heavy chains and then attempting to run a race; Turkey's government has not just damaged the credibility of the country, but has done untold real damage to the Turkish economy through its misguided policies.

It's really sad to see one of the democracies in the Muslim world reduced to this state of bitter infighting and anarchy largely by a government that does not appear to know when it's pushed its limits.  Electoral victories aren't an excuse for policies that scarcely differ from a dictatorship.

What happens next is probably in the hands of the Army, once again, which is a very sad state of affairs for a country that has often seemed like it was on the verge of becoming a modern state, despite all its problems and inconsistencies.

Deserath said:
Sounds like a mix of Religious/Political tension and excessive force from the police.
Click to expand...

Wait, who's mad at whom? Moreover, who's the government? I don't know much about Turkish politics, so some info would be welcome.

That stream was shut down a little while ago. ****'s going down.

An Egyptian tourist was in a critical condition after being hit by a police gas canister, Istanbul Medical Chamber board member Huseyin Demirduzen told Reuters. The 34-year-old woman was undergoing an operation after suffering a brain haemorrhage.

A total of 12 people, including a pro-Kurdish MP and a Reuters photographer, suffered trauma injuries and hundreds suffered respiratory problems due to the effects of tear gas during the clashes, Demirduzen said.

Some people were injured when a wall they were climbing collapsed as they tried to flee clouds of tear gas.

Amnesty International said it was concerned by what it described as "the use of excessive force" by the police against what had started out as a peaceful protest.

Interior Minister Muammer Guler promised that claims that police had used disproportionate force would be investigated.
Click to expand...

This guy on the video is reportedly dead.


Here are some pictures. Some are bloody and not for the faint of heart. 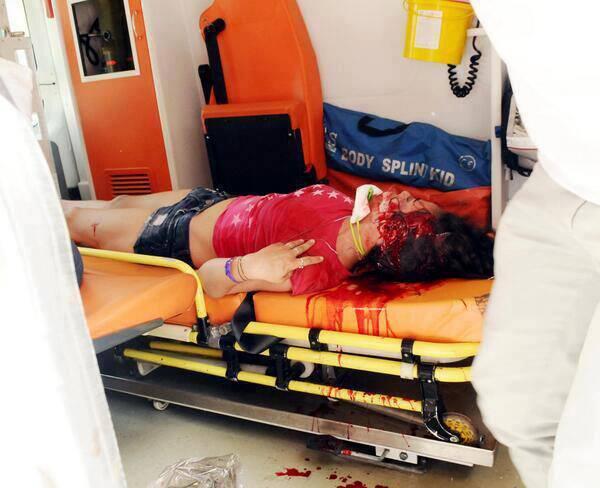 The sign says "Chemical Tayyip" on this one, referring to the tear gases. This comes after the warnings against public displays of affection and restrictions on alcohol sales.

People are angry and frustrated at the government's decision to build a shopping centre at the expense of one of Istanbul's most famous parks. But what started as a protest against the uprooting of trees is turning into a wider platform for expressing anger against government policies.

Environmentalists have been joined by gay and lesbian groups, as well as socialists, union workers, members of opposition parties from across the political landscape and even so-called "anti-capitalist Muslims". The excessive use of force by the riot police and the insistence of the government to pursue their plans for the park have escalated tensions.

Taksim Square has political significance for the anti-government protests. As part of the reconstruction plans, the square was banned as a venue for this year's May Day rally and any kind of demonstrations in the future; but now the government's heavy handed approach risks turning the square into a focal point for protests against its policies.
Click to expand...

My sister says the protests have spread to Kayseri, where she is right now. There are reports of protests in Ankara and other major cities as well.

But he wasn't even on fire!

Here is a video that follows the protestors after things went south. http://youtu.be/bIvjXLOmx4c

They're mostly saying "Shoulder to shoulder against Fascism."

after the warnings against public displays of affection
Click to expand...

I'd heard about the ban on alcohol but not this. Good luck to the Turkish people and I hope that this continues so that they might carve out a bit of freedom from their government.

Lets hope everything turns out for the better.

Wait, like dead because he got hosed so hard his heart gave in or someone killed him afterwards?

Dead as in he took a heavy blow to his head and after flying backwards, he also hit his head to the floor.

Some more photos of last night. 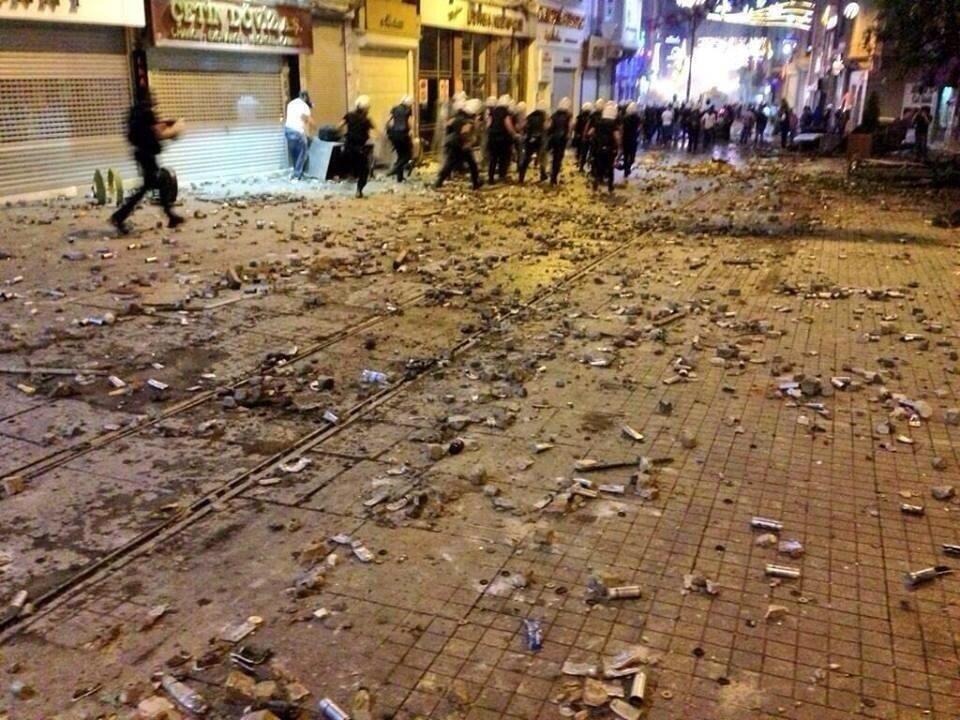 People protesting on the Bosphorus Bridge this morning.

Protests have spread to İzmir, Ankara and other major cities.

Condemn Americans for their gun ho attitudes all you like but it's a shame that Turkish civilians have little to no way to defend themselves from what appears to a police state level of government.

You guys need to find a firearms warehouse or something.

So the police would start attacking with real bullets as well?

I don't think we've gone that far. Still protesting "peacefully" as people believe in democracy. But it appears Erdoğan isn't serving the people as he simply dismisses the crows and tells his dogs to spray more gas.

More reports coming from various hotels in the area serving food to the protestors and setting up makeshift clinics.

The protests continued at night too, with harsher police response at various locations in Turkey. Austupaio said:
Condemn Americans for their gun ho attitudes all you like but it's a shame that Turkish civilians have little to no way to defend themselves from what appears to a police state level of government.

You guys need to find a firearms warehouse or something.
Click to expand...

All right, so who asked deaths to be removed from the score board?
5 6 7

Attack animations are awful for fighting from a formation