So I used This person's run as my inspiration to try and do my own Trade Skill 300 playthrough. I completed it somewhere shy of 1000 days and spent the remaining days to get the fiefs I wanted.

Below is my character, I prioritized getting trade skill as my main goal (due to learning rate reductions if I didn't) and ended up getting stewardship passively and taking part in as many 2 Handed tournaments as I could to raise my 2 Handed skill. The bow training came at the beginning of the game before I had a sustainable party. 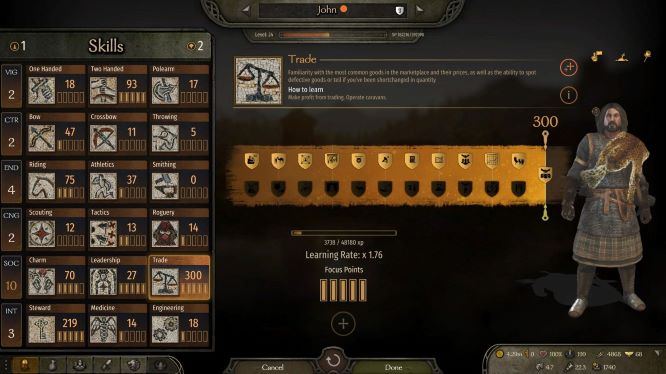 The riding took me a while, since I mostly traded in animals which kept my herd limit extremely high. I kept mostly infantry in my party, which I upgraded with the passive exp gain and a handful of battles with bandits, and doing deserters quests. I traveled around the map at around 1.5-2.0 speed when fully loaded on goods, mules (for resell) and horses until nearly 270 trade skill. After that, I began trading in commodities and any goods I could get cheap to grind out the remaining points.

Below is a map of the game map in Summer 1095, 1 year before I began buying my fiefs. The map had no interference from me, except for that one town Vostrum which I was able to take from some Rebels. I took it for bartering to get a town I actually wanted later. I could have taken 1-2 other rebel towns as well, but the amount of troop losses I would have sustained and the time it would have taken to break their walls would have slowed down my trade goals, so I didn't. 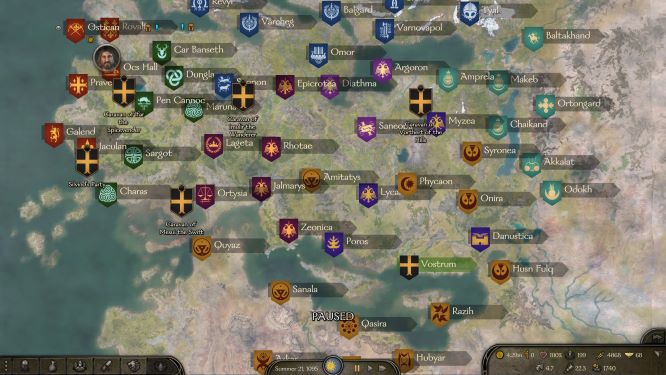 What I am proud of, is that every faction is still present and has a viable chance...with ZERO player interference! I want to give a big congratulations to the devs for doing that.

Lastly, this picture is taken in Autumn of 1096; 1 year and a season past me getting 300 trade. You will see I lost a lot of money, but the value can be seen below! 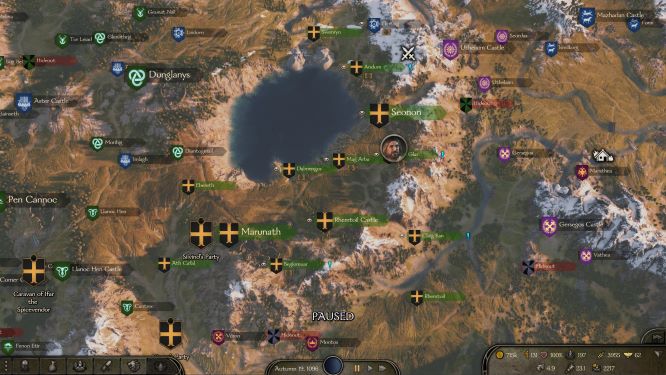 So at this point, I traded my city, and spent 4.5M denars to get 2 Cities and 1 Castle next to each other, and all without creating or swearing fealty to any Kingdom. In the year between these two map pics, I spent time leveling smithing on a family member and dumping the remaining trade goods (about 200k worth) for capital. I like creating my own weapons, and giving each family member and companion their own named item now that the legacy has been bought.

I want to note, for the purpose of the trade skill leveling, I did NOT use any Smithing goods to raise capital. All of my smithing occurred after I hit 300 and purchased the fiefs I wanted for this playthrough.

Overall, I really enjoyed it and found I started from a much better position at this point in the game both financially and in terms of military power compared to doing a strictly military style play. I do think getting to 300 trade once I hit 275 was very painful, but I cannot really suggest making it easier to get considering the sheer power of purchasing fiefs where you want them...I mean I did just buy two of the best Battanian cities upon getting the perk.

I loved this playthrough and found it much more rewarding than I thought it would be! I went from not knowing anything about the markets, to creating paths, and smelling opportunites based on wars and siege locations...prices of food items were VERY variable (due to long sieges) towards the end. It was great!

Hope this helps anyone who was thinking about trying a trader to give it a shot. I didn't expect to enjoy it but is probably one of my favorites so far.

Just done a similar run and the only thing I'd add is that for me the most helpful perk was the riding horde one that halved the herding penalty as it goes a long way to getting round the slowness of movement and would strongly recommend as a goal for any trading player.
You must log in or register to reply here.