Please leave all map-related feedback for Town Outskirts in this thread.

Androme1 said:
I'd love to spawn a bit closer to the town entrance as opposed to much further away Or it would be good if we could spawn on horses.
Click to expand...

This is an online skirmish map mate, not a singleplayer scene.

I will say that the stairs need fixing, and certain "invisible" barriers need fine tuning. The sacks on the right of the OP picture are a classic example of thinking you can couch lance someone behind them from one side but you end up clacking off nothing. I'll come back with examples if I can get a chance to record it in a skirmish game.

The spawns are not great either, a few times now I've been killing people on one of the spawn points and they'll spawn right next to me as an archer while I'm an infantry and it just leaves them no choice but to die again.

There is actually a bug on this map where it is possible to get stuck in the entry way of buildings by clipping inside the wall. Attempts to escape just push the character up the wall into the ceiling.

Aura (Zaffa) said:
There is actually a bug on this map where it is possible to get stuck in the entry way of buildings by clipping inside the wall. Attempts to escape just push the character up the wall into the ceiling.

This map is fine gameplay wise but theres still quite a few spots were you can get yourself stuck and even more where you can leave the designated playarea. Look through my posted threads if you need examples, as far as I can tell nothings been fixed yet.

can still literally walk outside the map trough one spawns gate. also got reported but never fixed

There are few spots were you can get stuck. Generally behind wooden fence.

Also, is there a way we can get a full plan from above of the map?

Its the worst map of all.

1. cav can come from 200 possible angles, an open map would be better because you can actually see the cav when it charges you. It makes it really hard (impossible/frustrating) to play infantry or archers on this map.
2. This leads directly to the next problem. There are only 2 "safezones" on the map, so basicly you are forced to rush them. If you control the safezone you control half the map. The enemy cav can reach the infantry before reaching the safezone, which results in lots of cav rushes.
3. The spawns are set up so certain teams need to rush certain safezones. So the game plays out the same every game. Skirmish should support a scouting and counteractive gameplay. This means if Team 1 goes to spot A, Team 2 can counter this by going to spot B that gives them a terrain advantage over A. If team 2 goes B, team 1 can go C, which gives them an advantage over B and so on.
4. Like already mentioned by Mabons the spawns are in the open and easy to camp by cav.

I think that many of the issues I have with this map stem from the linear setup of its flags. As @Caps described above, the platforms overlooking A and C are always the go-to areas, because with this linear design all of the tension in the map is around the central flag. With it taking so much longer to move between A and C by any path other than through B, the central flag at B will always be both the most important and least likely flag to be taken on the map. I don't expect that it is likely to happen at this point, but ideally A and C (sorry that the overview seems to have them reversed) would be moved slightly closer to each other - and, additionally, would have a path connecting them that does not lead through B. B would be moved slightly closer to the right hand spawn to allow for a triangular shape to develop, and, crucially, would be made no longer visible from the platforms by A and C. This would obviously require a lot of work across the map, but in my view it is the most important change to make; I also hope that future maps, which, from what I've seen in the files, look to have similar linear structures, will be changed before they are released. It's also worth noting that I don't believe it is necessary to have both sides of the map be balanced in their distance from the flags as all three skirmish maps currently are.
Something that I've seen a few people mention on the forums is that despite the map being quite enclosed spatially, it plays much like an open map would, benefiting archers and cavalry. A significant factor contributing to this is the extensive visibility a player has across the used sections of the map. It allows archers to shoot from a greater distance than they should be able to, and also means that cavalry, who in Warband might have been forced to be cautious about being reared by a spearman hiding around a corner, can basically track the positions of the entire enemy team by themselves. The raised stall areas by A and C are, in my view, leading contributors to this issue. The mesh used in the stall shown in the first screenshot is a welcome guard against archers on A, but I think that we would be better off if it were replaced with wooden boards which block sight onto the flag, and I also don't think that it should be possible to shoot onto the flag from where I am standing in the screenshot. In the area shown in the second screenshot, it would be preferable that the wall be raised, or the terrain around it lowered, so that an archer is forced to step fully around the corner if they want to shoot onto the flag. For both of these areas, however, it is important that it is still possible to shoot, from some angle, into the raised platforms; this is displayed at C by the third screenshot, but the same goes for its equivalent position on A as well. I largely enjoy playing on A, but I think that the back platform area is underutilised and important for balancing the platform across from it. The first change I would make here is, as the arrow hopefully indicates, to bring the left-hand building towards the direction of B by roughly a metre. This will slightly close up the main entrance to the flag, making cavalry and archery very slightly weaker on A, and also decrease the time it takes to reach the platform on the far side of the house. The second change I would like to see is for the steps down there to be moved directly adjacent to the house as shown. This is important for the final change, which is the addition of some kind of wall or other barrier on the corner of the platform which covers a player from the platform area (the drawing I have made here is just a flat wall, but, depending on how it feels, it could also extend around the corner as well). Although it is a minor change, this barrier has the potential to significantly counterbalance the strength of archers on the platform on A, which, in turn, could lead to other sections of A being used more than they currently are. B is the most problematic flag, and I can't really think of an easy solution to its problems (the best, in my view, is to move it so that it is not directly between A and C, as I outlined above). In both of these screenshots, however, the dual entrance points make both couched lances and archers - whose strength in the area is already exacerbated by the raised platforms - stronger on B than is ideal. In the first screenshot, the left path could be removed by bringing forward the arch; in the new corner, some kind of defensive area could be made for archers which is less oppressive than the current layout. The same goes for the dual entrance shown by the second screenshot: here I think that it may be sufficient to move the central building forward, so that an archer in the left alley cannot shoot onto the flag unless they step out past the building. I really like the feel of C, particularly the back area around the tree. The first change I've suggested here is to block off the most extreme path around this side of the map: it serves very little use for anyone except as a quick getaway or entrance point onto C for couching cavalry, who don't need the help that an exit point on every side of the area offers them. The second change is a very minor one: the roof shown in the second screenshot has a significant gap in it, visible from both ends. From memory, this is the case on a few roofs around the map, but this one on C is particularly noticeable.

I wouldn't be confident about any further suggestions to the map, aside perhaps from some alteration to the spawn areas, without first waiting for changes to the combat system. Thanks for reading. 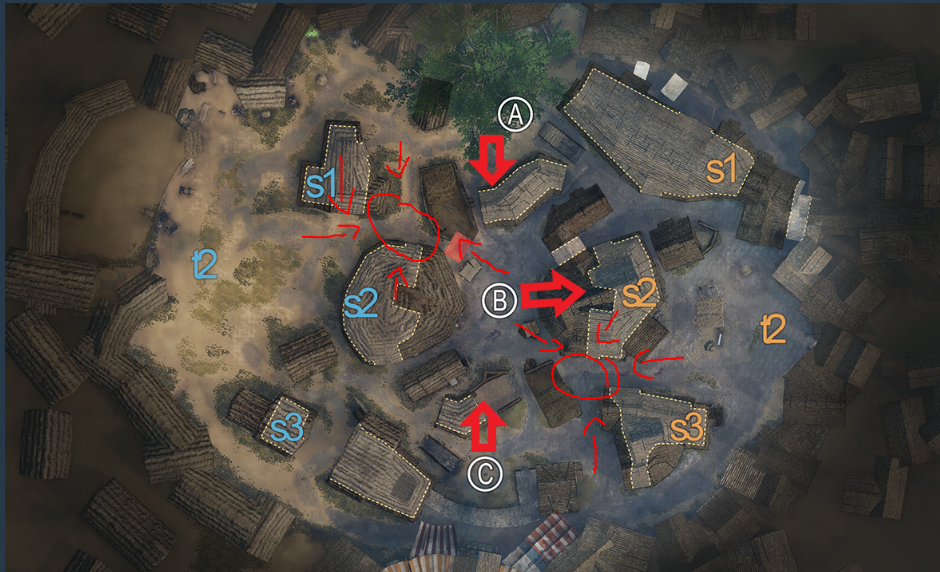 these are the biggest problem areas, its just too open and infantry needs to pass through it. The safezones offer no protection from couches, so playin archer is on this map close to impossible.

Perhaps moving the main spawns slightly closer to the flags would help with those problem areas, although I think that the better solution would be implementing the community's suggested changes to cavalry instead.

Schubertt said:
Perhaps moving the main spawns slightly closer to the flags would help with those problem areas, although I think that the better solution would be implementing the community's suggested changes to cavalry instead.
Click to expand...

that wont fix it, the problem is the map

Like that spot there are so many angles cav can come from and you see them super late because of all the corners.