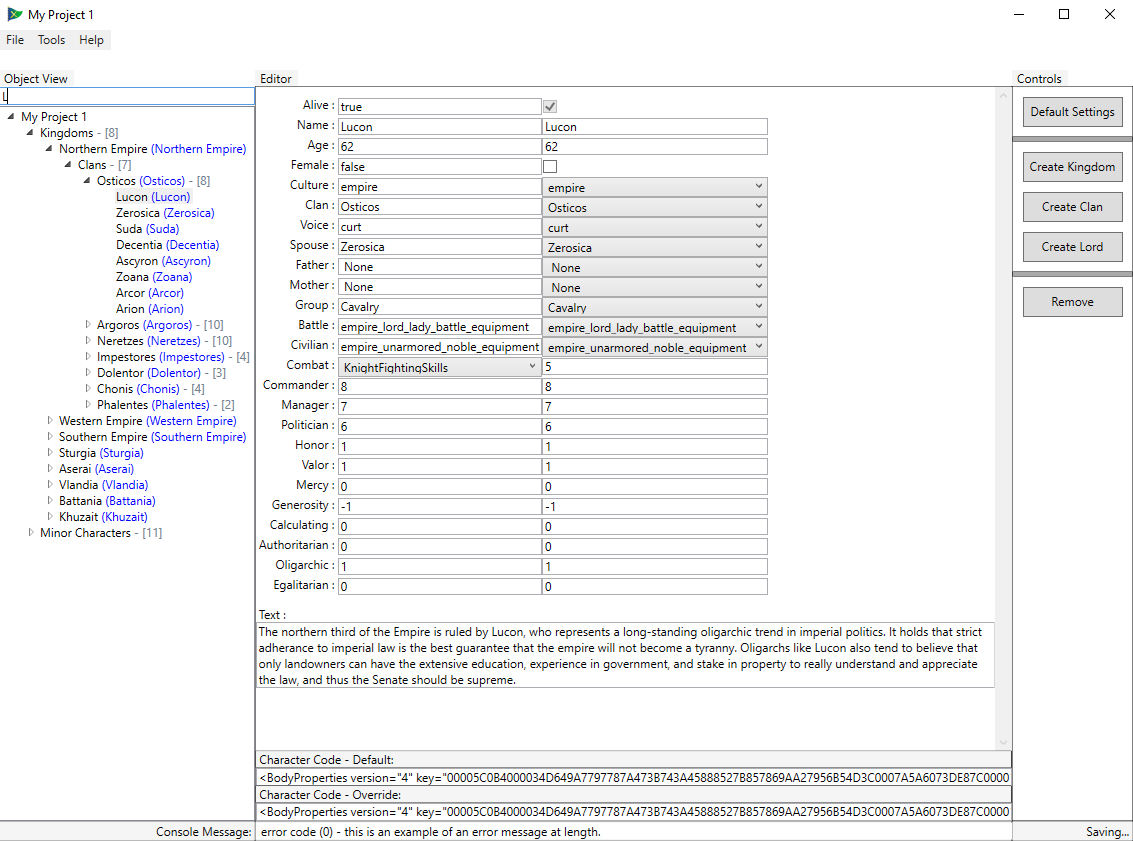 The test version of xLord.exe is now available as a .rar file and makes use of the .NET runtime available from Microsoft.

If you don't have the runtime, you can download it using the link provided and following the image below.

This is a very limited version as of now, a lot of UI stuff isn't even working yet, including hotkeys.

I have included 1.4.1 source files from Bannerlord in the .rar file, these files are currently supported/required for editing. You don't even need the game installed to create a lord overhaul with the .rar file provided. The Tools/Options window allows you to set the path to this 1.4.1 file folder, by default the path is pointed at the default installation path of Steam and Bannerlord.

Using these separate source files is actually a good idea so you can replace the files in the game without causing any import issues in the process (you can import edited source files as source files).

You should expect the possibility of crippling bugs and potentially losing all of your work because of an update. I don't recommend making mods with this tool yet because of that. However, I have printed a very simple lord overhaul using the tool and project saving seems to be working fine, so this version should be stable enough to assist with lord editing if you wish to use it that way.

Where is my project file?

xLord creates an "xLord" folder in your documents folder on your user path that stores new project files.

Very nice, should help a lot in saving time from editing all these xmls

Amazing! Looking forward to its release >_>

Nice! I hope this works when I'd like to edit my own troops-tree, a mod. ?

After lord, clan, and kingdom editors is ready, sure.

Hey, that's a great tool - thanks a lot!

MattiasL said:
Nice! I hope this works when I'd like to edit my own troops-tree, a mod. ?
Click to expand...

There is a mod to do this my friend works with 1.4.1 I can confirm "The Humble Unit Editor"

I hit a snag which has taken some time to fix. Refactoring the code was necessary and it resulted in reworking the whole object view much sooner than expected. Now the object view can be configured much better than before. More importantly, the saving/loading system is finally underway and the project can be saved to the disk successfully.

I started working on a simple Paint file that represents the layout with any future editors I can think of, so far I have troops, companions, crafting, settlements, and dialogue listed.

Just right on time for my new campaign! Thanks A Lot!

Edit: Can't explain how epic this is! Going to be groundbreaking for me, that is for sure!

TheREALHayster said:
Keeps crashing on me when try to start a new file and yes i have downloaded the runtime
Click to expand...

If you haven't already, you might wanna go to "Tools", then "Options" and change the directory

Lyceria is right but I also just noticed I uploaded the wrong source files/folder.

The link now contains the correct folder structure. You can also add these folders yourself.