SP Dark Ages The Sword And The Axe

Thank you! The meshes are very old, Alphadelta's Viknig Warriors tunics, from 2009 or so. But the texture is new, mdae by me and double the size of the original one. Clothes OSP for M&B are really rare.

Very nice looking shields. Believable and practical looking. No complaints.
I remember seeing these older tunics in a mod for OG mount and blade at least 10 years ago. i think it was called Roots Of Yggdrasil.
I checked the map of Finland i noticed that some cities and towns have a little bit of a wrong name, or it's spelling is off somewhat(nothing major, i got to applaud that), i can help with these, i have books and sources that tell the correct name for these places.

I am not also sure but the sounds of weapons hitting shields and flesh are quiet, so quiet at least with my computer that it's not easy to hear them especially with music....or am i just imaging it or is my PC playing tricks with me, got to check this still.
I also reckoned that there were more "death screams" but i probably remember that wrong too.

I will also probably give more appropriate pictures and material this week i wasn't able last week since i was not home, i got into contact with my friend again.

Thank you, glad you like it! Yes, the map needs work, and if you are able to help, that will be amazing. I haven't been able to find good sources in English, only in various Scandinavian languages, and since I don't speak Norwegian, Swedish or Finnish, I can't really use them.

The sounds are to be edited, yes. I am also looking for people that speak Norwegian, Swedish or Finnish (if they know the old, medieval language even better) and want to record a few lines for me. I know how to make the troops use different sounds according to their faction (it is very easy really, anybody can do it), but I need to have the audio files, of course.

The idea is to make the commands given by the player sounding to (Old) Norse (I made such a thing for my Gekokujo submod, the commands sound in Japanese). Also, the victory sounds, the die and hit sounds etc. So, if you guys can or have friends that can record a few lines for me, that'd be awesome.

I speak some and write Swedish we have it mandatory for 6( more nowadays actually) years in our school system. Naturally Finnish is my mother language. I had one friend who could speak ancient Norse or Svea, meaning Swedish language from 9th Century, but i don't know where he is since he went into South America and didn't left notes...damn. one of my relatives can speak some old Finnish and Finnic languages he has taken courses. But he is possibly terminally sick so i dare not to bother him with this, since he wants to be alone for now if he gets better i'l try to get into contact with him.

I also checked the place names and i have better alternatives to them and some that are in this list are historically more accurate than the current version. i will write with big letters and onto right the CORRECT name.

Kakolaby= KAKOLA
Verkausby= VARKAUS
Inmatra= IMATRA
Sulkava= this is correct and written with right grammar.
Aldeigjuborg= LAATOKANLINNA, this is the Finnish name to that place, but Aldeigjuborg name was given by Variags so it's more fitting. It was also the HQ of Rurik at one point.
Mikkeliby= MIKKELI
Ruavinjarga= This is actually the Sami name for ROVANIEMI a major Finnish town in Lapland.
Gunmarenby= KUMMOLA
Tampereborg= This is the city of TAMPERE, but it has had many names such as a Sami name of TEMPELKOSKE, Swedish name of Damberg and the old Finnish name of TAMMERKOSKI, i would change it to TAMMERKOSKI since it is an old Viking Age dwelling place.
Hakoisten= the correct name is HAKOINEN, there is also a castle-mount there in Finnish they are called "Linnavuori"
Stumaby= SAILOLA
Saugalbeby= SAUKANE
Jomala= This is also correct, the name is a reference to the Finnish word "jumala" meaning God. Jomala has had a population at least from 600AD.
Hitis= The Swedish word for HIITTINEN, it was a stopping point for Vikings even a runestone has been found from here.
Grabbacka= KRANINSUO is the correct name, Grabbacka was a name given much later.
Sibbesborg= SIPOONLINNA but the older name is VÄRTINLINNA.

Well, those were the names i would change but mostly the naming of places is good and not that far off.

Thank you very much, I changed the name according to your directions!

You still got many of these place names correct, so you didn't do nothing haphazardly.

And i know it is hard to find the original Finnish names for even the big cities since there are not that many written accounts about place names. of course the people who lived then knew what to call the place but these have either been lost or are known almost to none,

My friends grandfather once told him through an oral tradition the name of his home village and a VERY old poem/advice/story, that even the museum and historians didn't know, but when they checked an old pergament from 11th century it matched so he was not telling tales. Even Kalevala contains many orally transmitted songs and spells that are ancient and that are probably not found on any written paper.

In Europe finding old names for places is easier. Take England for example,Viking Age place names have changed little and there is plenty of accounts. London was Lundunum, Canterburry was Cantwarburh,Norwich was Norwic and York was Jorvik.

As i said here's some more material, because of a bad internet connection i cannot say can i give more pictures this week, if i can fix the connection hiccups i probably can.

1st picture: These warriors are based on scetches of "forest Finns" who sometimes were hired by Vikings( they rarely took the offer however) as guides in thick forest areas, they favored hoods and earthly colors since they wanted to stay hidden.

2nd picture: Reconstruction of a woman's dress from Eura, many times the more jewelry and keys the woman had on her breast, the wealthier she was.

3rd picture: "Kilvenkantaja" a similar warrior as a "Hirdmann" in Norway who accompanied his liege into battle. the seax was a good backup weapon.

4th picture: middle-class women from Inari,Lapland, in Karelia and Lapland wearing of warm clothes was vital in order to survive.

5th picture left side: a more well-of "maanviljelijä" a farmer, the place is Western Finland the clothing is a reconstruction found close to Pori.
5th picture right side: a man wearing a fur-lined kaftan, this kind of clothing would probably have been worn after summer and on cool winter days in Middle Finland and Eastern Karelia.

6th picture: a man wearing a ornate jacket and a "birka cap" which is in Finland known as a "Cap of Väinämöinen" or "four-side cap" the clothing is a reconstruction found close to Hämeenlinna or Tavastehus.

7th picture: an Eastern Karelian wealthy man, wearing armor similar to Rus, there were some variations in armor styles it was sometimes more closer to Viking armor but if the man was from a Rus-influenced town then this would be more close to his wardrobe. note especially the pointed helmet and lamellar armor.

8th picture: An old rendition where Joukahainen angry because Väinämöinen with the power of his voice made the ground tremble and singed him into swamp where he got a cold( really, this is no joke) prepares to shoot Väinämöinen, his mother urges him to go on. The clothing is similar to Viking Age, notice again the "four-side cap". 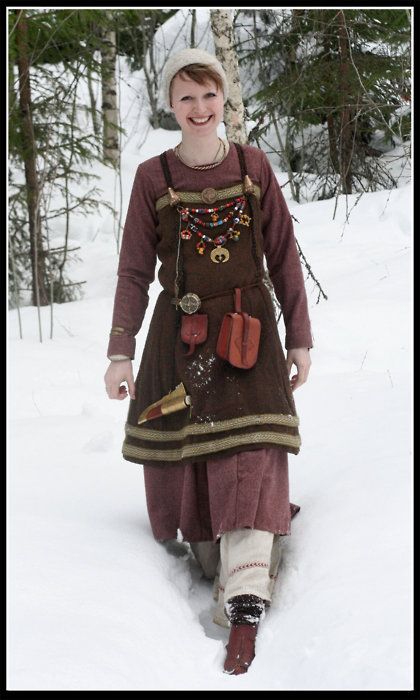 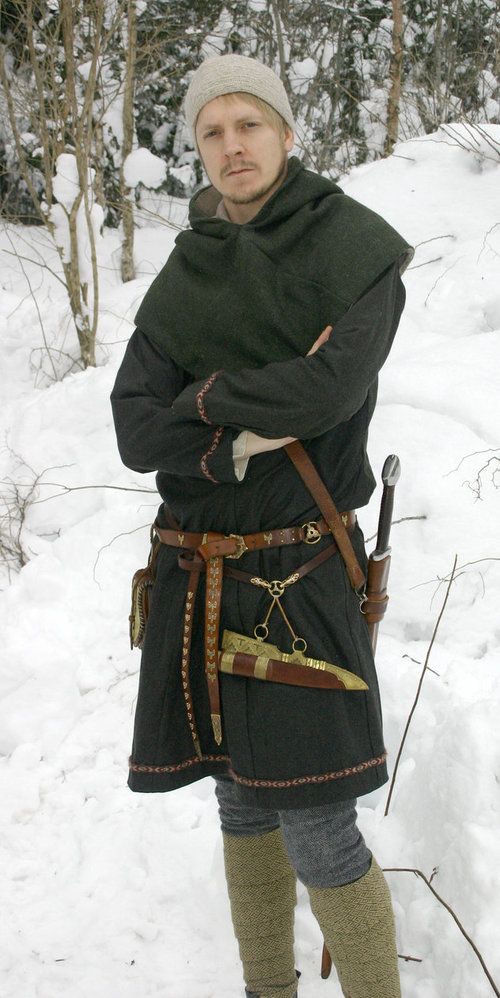 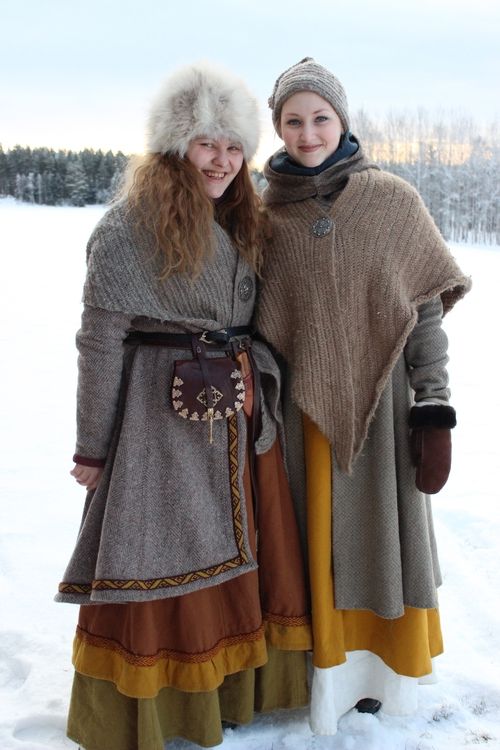 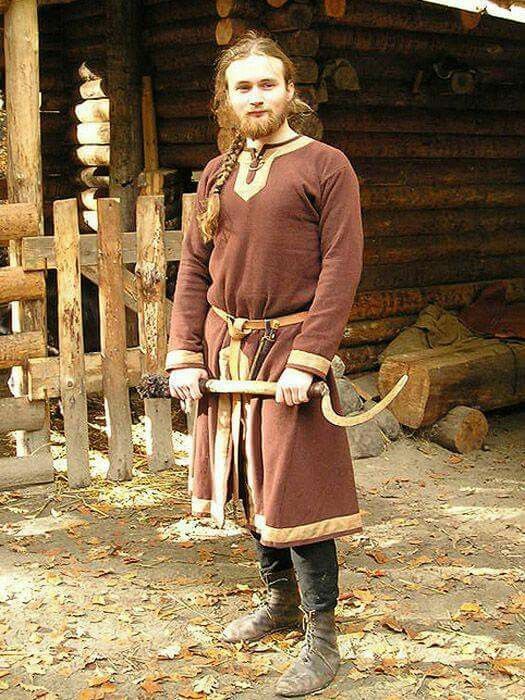 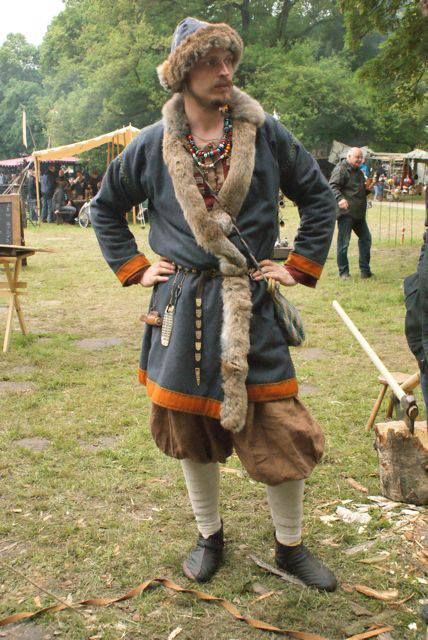 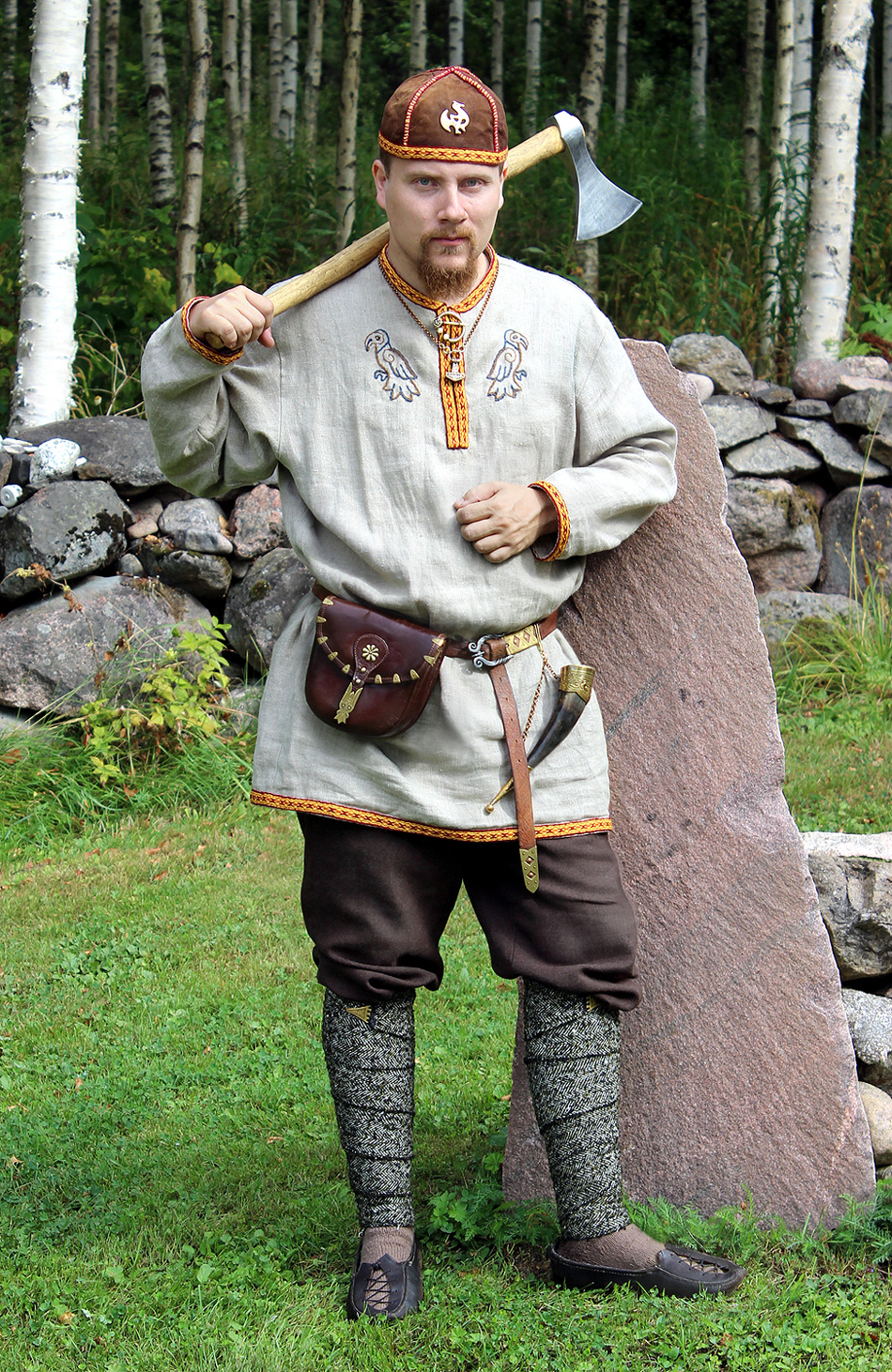 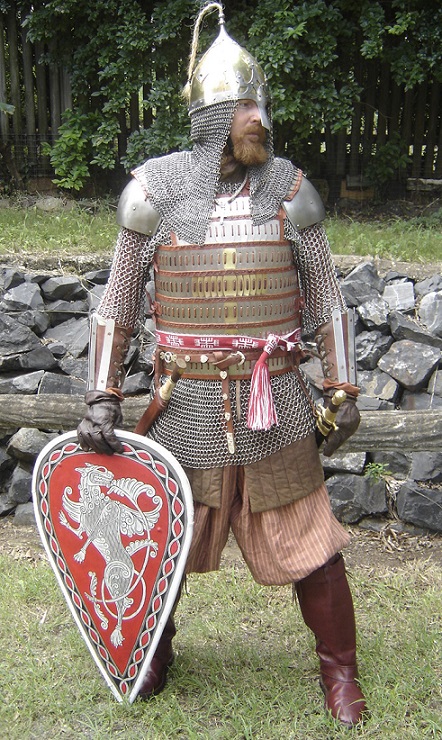 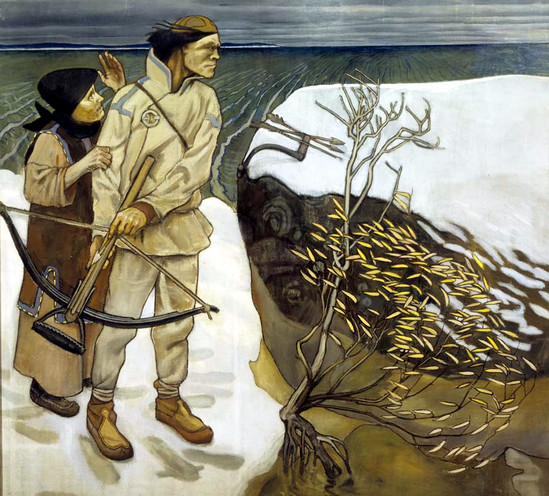 Hmmm, very nice! I may do some more clothing. Finns have also their own villager look in the mod, so those will be very useful.
Only one thing, though: the second to last picture, I am pretty certain this is an armour from a later period, almost certainly from the 14th century. I base this observation on the sword, the characteristic Russian kite shield and the pauldrons of the body armour. Still, very nice material.

Perhaps think about using the spoilers to put the images into ^^

Hehe, I've told him before, I think.

Yeah i will try that next time it has not worked with me for some reason, maybe my laptop is too old... have to test. 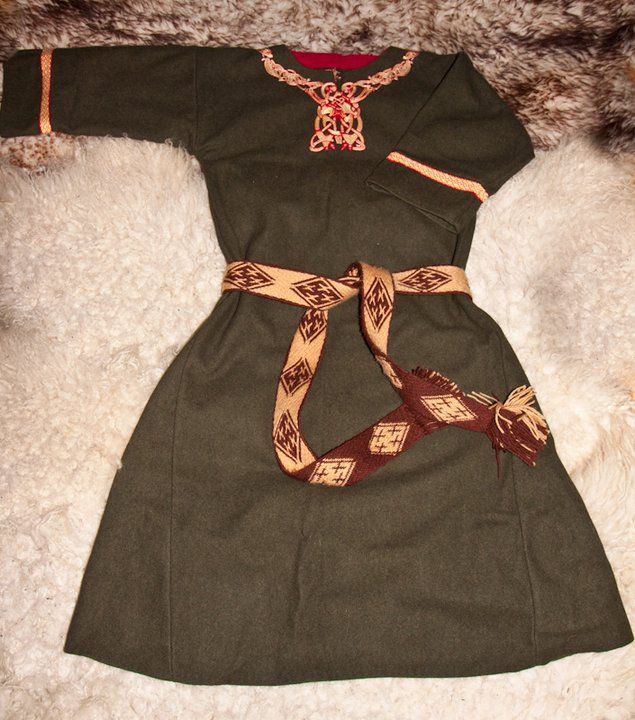 I am honored that even a moderator acknowledges my research. It's not easy to find suitable and good material even when i can speak and understand some Scandinavian languages.

It works fine, don't worry! Nice coat! Now, I have to find a coat to re-texture.

I've been following this with interest. Fantastic. Thanks for sharing, and thanks for working on including it!

I am glad you like it! There's a new version being made, with every troop remade (mostly in terms of stats, but many troops received new equipment, as well), new and remade items, special weapons for kings and jarls, a fix in the default formations script, suggested by tocan, author of Tocan's Calradia mod, plus the usual bug-fixing stuff.

Antonis said:
a fix in the default formations script, suggested by tocan
Click to expand...

What is it now with this fix you mention? What did tocan discover here? Tell us more

The man's words themselves:

Tocan said:
Wow, yes, actually the (infantry) formations don't get used from the ai because the default formation can't be set, it works only in quick battles this way. With that block it searches for troops culture instead kingdom, but you only set the troops kingdom. They just stand in line like native and charge after the archers get out of ammo.
Click to expand...

It does have a noticeable difference.

Yes Tocan did talk something about these formations...

I try to post something this week, i've been busy with work( repairing the sauna) and life situations.

But i think i will post something if not tomorrow then Friday at least.

Keep up the good work Antonis!