A link because my suggestion is quite long.

Hello there N0ught. Glad to see this mod is still going on.

If I may suggest, I don't know if you've watched the 1990 series Twin Peaks but I was thinking about one or more gates into the Faerie similar to the entrance in the Black Lodge. Basically they're available on certain days of the year and on certain hours. And you have to bring some offering to open the gateway. At different times the gates bring you to different parts of the Faerie.

You can access a standard, simple Faerie every day around 3:00 am (there is some sort of story about 3:00 am being the hour when the veil between this world and the spirit world is thinner) but to access special parts of the Faerie you have to enter during Samhain (~1 November), Imbolc (~1 February), Beltane (~1 May), or Lughnasadh (~1 August). Also you might add a quest line about some Nord village haunted by spirits of the Faerie (in a somewhat similar way how Twin Peaks was haunted by BOB and MIKE.

In the TV show, the main character (Agent Dale Cooper) finds the entrance to the Black Lodge (after he has solved many other mysteries) in a place called Glastonberry Grove (reference to King Arthur's Glastonbury): Also, the character of Windom Earle from Twin Peaks is quite interesting. Basically an ex-FBI agent practicer of some dark form of Vajrayana Buddhism, in one of the scenes in the show, he lives in a cabin in the woods dressed in pajamas and playing a samurai bamboo flute(which uses as a weapon). It strongly reminds of the deity Pan or of the Satyrs/Fauns: 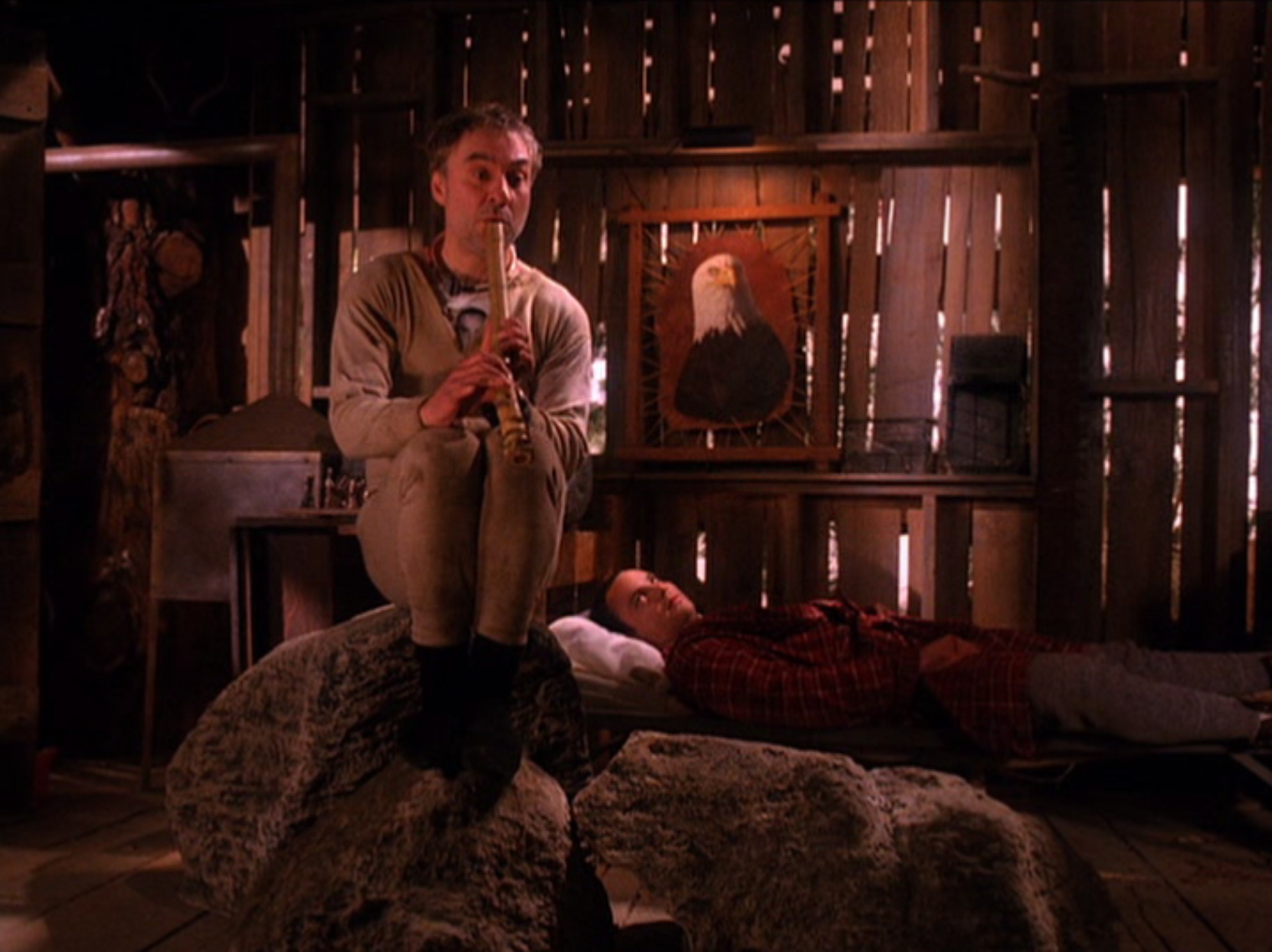 Another inspiration about possible inhabitants of the Faerie comes from American Gods (yes, I've been watching some new tv series recently) - Mr. Wood - A tree-like animistic deity which can move and kill people. You can make a mix between it and The Arm/The Dwarf in tree form (Twin Peaks again):

What about there is a eclipse feature.

EXAMPLE:
If you like sacrifice "piety" units a eclipse phase happens. When you do all Necromancy stuff a total eclipse happens.
Then you get like 35 Hell or Faerie units. (Demons or Homunculus) but a total eclipse is hard to achieve due to the difficulty of the objectives.

What about a "Thou Art the Man" storyline?

I think it is one of the best of Poe's mysteries.

These suggestions have probably been mentioned already but since there's no post or anything that displays what's been said already here goes.

First, while the player can create their own faction which is great, there doesn't seem to be any way to name it or rename it. Please add that option if possible, and in the meantime if there's a fairly simple way to manually rename the player's faction like a text document I'd appreciate it if I could be pointed to it and how to do it specifically. The first post here already mentioned creating a undead culture for the player's faction so I second that one.

Second, I'd like a "raise all human corpses in inventory" option in the zombie necronomicon menu, so if I have slightly less than a full 5, 10, or 20 corpses I don't have to keep going into the menu repeatedly to raise them all. Along with this, I'd like a way to simply turn prisoners into zombies directly from the "sacrifice prisoners" menu so I don't have to worry about my inventory space in the process. At the very least I'd like to see a "sacrifice all prisoners" option added for the same reason as the "raise all corpses" option. On a similar note, if one sacrifices prisoners while having a lord for a prisoner it will kill them, which I'm assuming is unintentional.

Lastly, I'm wonder if it would be possible to change some of the undead upgrade items such as formaldehyde so that they've got amounts like food and trade items, (like how ale and bread have 50/50) like 10/10 or something so that one item can be used to improve multiple undead. As it is it costs far more resources, time, and money to upgrade one's undead this way than the rather marginal improvement is really worth.

how to become a warewolf i cant figure it out

What's up, Doc? If you look on the Discoveries thread and use the forum's search feature to look for "werewolf", you should be able to find your answer in no time. You could also join our discord server from the thread on the main board and ask your question in the questionandanswer thread. Thanks for playing, and I have full confidence that you'll figure it out with the right search tools.

How about some more mundane suggestions?

What I really want is for village elders and town guildmasters to be meetable through the menu rather than having to trek through whatever hilly hell or winding streets to find the elder or guildmaster on foot.