The Siege of Tuldar Fortress

The Siege of Tuldar Fortress took place on October 24, 356 during the war between the Baccus Empire and the The D'Shar Principalities. 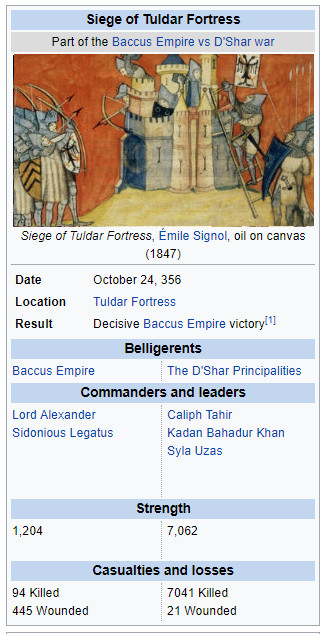 Background
The Baccus Empire had been severely weakened from previous wars with Sarleon & D'Shar and they had only 3 fiefs (Janos, Rela Keep, Tuldar Fortress). Lord Alexander owned the 2 castles and the garrisons had a lot of elite unites stationed.

Syla Uzas who was acting as a hired mercenary for Kadan had close to 3800 troops and was the biggest threat in the D'Shar army.

The D'Shar constructed their siege tower and started pushing it towards the front wall. Alexander repositioned the archers to the side so that they are protected from enemy fire and have a clear view to the enemies that would rush to the wall breach.

The Assault
When the D'Shar troops started assaulting the breach, the Empire infantry held their ground fighting fiercely while the crossbowmen took out targets. Alexander had 4 bags of Old Empire Pila taking down enemies while commanding his troops with success.

Aftermath
The D'Shar army was completely destroyed with many of their nobles captured. The victory provided a big morale boost for the Empire Marshal force and gave them the opportunity to go on the offensive.

Sadly though the two factions went for peace the following day and the Empire lost the chance to regain lost territory.

Hit me up with the siege of Singal too.

Great you should try an open field battle

Nice read.
You must log in or register to reply here.

In Progress crash on declaring peace while joining siege

Does the AI consider what Fiefs you own when calculating war declaration?