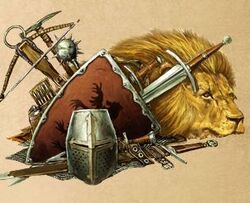 The Roving Roleplayers​
Information:
I hereby present to the PW community, the Roving Roleplayers!
We are a bunch of friends from a gaming community called the XI that decided to make a little group for Persistent World. Our goal with this group is to have fun, ofcourse, in PW. However, we have some other aims aswell, including that we will be having a flexible chain of command an playing style. Everytime we go in as a group the leadership and faction type (if applies) will be voted. This is because we want everyone to have a say in what's gonna happen, and we don't want to fall into a routine of constantly the same old story!

Alright, that's our roster right there. The only difference between the titles that everyone's got in our roster is that TKTom and I will decide things regarding the group itself, and not the gameplay. So we're still equal to the rest.

One extra thing I'd like to add that The Roving Roleplayers are a sub-clan for a fun gaming community called the XI Legion. It's basically a bunch of friends that hang around in our own TS and play several games with eachother. We also play some other mods in Mount & Blade Warband: MountnGladius, the ESA is the XI's clan in this mod, and Mount & Musket: Batallion, in which we have the 41st Welch Regiment of Foot. So if you're either interested in the XI, the ESA, the 41st or The Roving Roleplayers, give me a PM and I'll inform you.
​

Someone with the name Scorpion? I shall slay him ingame!

Good luck though, from the House Lynsinova!

Welcome to the community! Good luck!

Hehe, I'd be glad to join in when I get a mic

I could join this, certainly...

Good. : D If you come on ts this afternoon I'll inform you about everything.