The French FOREIGN LEGION in Mexico

NOTE:  please, DO NOT POST unless you add a documented  info or, even better, an historical pic or painting!!

I watched some movies and read some books about the Foreign Legion, but I admit that I knew very few about their presence and battles in Mexico, in the 1860s !

I was always interested and fashinated by those rejected ppl that would gain respect for their corageus actions in desperate battles.

I just ADDED THEM in the game, as Mercs at the moment, and you can play as one of them and lead them in
-CUSTOM Battles for Single Player
-...and in Lan MULTIPLAYER. !!!!

And there was a particularly "desperate" battle in which they showed entirely their value!
http://www.google.it/url?sa=t&rct=j&q=camerone%20battle%20of&source=video&cd=1&ved=0CDgQtwIwAA&url=http%3A%2F%2Fwww.youtube.com%2Fwatch%3Fv%3D6QSMadFhrW4&ei=NeEeUMXSPOKJ4gS1l4E4&usg=AFQjCNEKze76PsZitRsfZIsjhhQZkGirzw

Soooo, I will set a question here:
-what does the French Foreign Legion Corp still celebrate every year?
What was it about?

Also, in this new Topic, any pic, info and vid about this Corp  is welcome, but please, limit it at ONLY  THAT 1860s mexican context!

So...who s gonna start??!!
EDIT by Gabby:
Ok! I see the first question got answered.
I will add some History now, then.

At that time, many European nations had been disrupted by revolts and unrest, and there were many foreign mercenaries and discharged soldiers hanging around the streets of Paris.
Louis-Philippe's position as King was far from secure and his efforts at empire building in North Africa were not going very well.
According to tradition, the idea of employing these potentially troublesome foreigners to consolidate France's hold on Algeria was  suggested by Marshal Soult, one of Napoleon Bonaparte's ablest generals. Whether or not this is true, the Legion was formed using officers from Napoleon's Grande Armée and men from Italy (hehehehe, I' M ITALIAN!!), Spain, Switzerland and other European countries.
There were also some French recruits who were trying to escape the attention of their local Police, plus some who were 'volunteered' by magistrates eager to empty their jails!
The rule forbidding Frenchmen from enlisting was introduced quite soon thereafter and remained in place till very recently. The Legion first saw action in Algeria, it's bravery and fighting prowess promoting it from its initial status as something little better than a penal battalion.
However, in the years since its formation, the French Government has seen the advantage of having troops whose families cannot vote, and so the Legion has served with distinction in such diverse campaigns and places as the Crimea, (Russia), Spain, Indo-China, Madagascar, Taiwan, Chad, Zaire, Somalia, the Persian Gulf, Bosnia and Kosovo.
It's most famous battle occurred on April 30th, 1863, at the hamlet of Camerone, some 64 kilometres (40 miles) west of Vera Cruz, Mexico.
A half-strength patrol from the 3rd Company, 1st Battalion, Legion Etrangere, led by Capt Danjou, protected a gold bullion convoy by holding down more than 2,000 Mexican regulars and guerrillas.
After several fights against the Mexican lancers just beyond the deserted La Trinidad Hacienda at Camerone, the Legion took cover within the old walls of the farm house. There, for over 10 hours, they withstood repeated assaults from the growing Mexican force, with Capt Danjou obliging his men to swear on his wooden hand (he'd lost his hand in the Crimea) to fight to the last man. Finally, the surviving officer and 4 legionnaires fixed bayonets and charged into the midst of the massed juaristas. The officer was mortally wounded, 2 of his men were killed and the other 2 were about to be slaughtered when a Mexican officer saved them. He shouted: "Surrender"! "We will only if you promise to allow us to carry and care for our injured men and if you leave us our guns". The Mexican officer's famous reply was "Nothing can be refused to men like you"!  The Legion has never regarded Camerone as a defeat but rather as the prime example of "fidelity to the mission."  For the Legion, Capt Danjou's men had kept their promise; for 11 hours, they had resisted 2,000 enemy troops. They had killed 300 of them and had injured as many. Their sacrifice had saved the convoy and so they had fulfilled their mission.
Now, wherever they may be serving,  Legion units commemorate the gallantry of the 3rd of the 1st every April 30, 'Camerone Day'. Anyone considering joining the Legion should think about the moral of this story -- that a legionnaire is expected to die rather than abandon the mission!
----------------------------------------------------------------------------------------------------------------------

PS please, DO NOT POST unless you add a documented  info or, even better, an historical pic or painting!!

Allways had a fascination for them, don't know that much about them though.

BIGGEST FAN, I also liked those super soldiers, that often had a bad or even terrible past, but would make some grandious actions that would change their reputation and make them to regain their Honor.

Stay tuned, we will see who will add (and what), new things and expecially PICS on that issue!!!!

NOTE:  This Topic is open to everybody, of course, but please, DO NOT POST unless you add a documented  info or, even better, an historical pic or painting!!

Ah, sorry, I found several descriptions and infos about the battle of Camerone and the celebration, but in french, so I didn't give the links ^^


Here are some pictures :

Officer's uniform : http://www.cinecreatif.com/officier-legion-etrangere---mexique-1863.shtml
(On this page, it is said that the Foreign Legion Uniform was reformed in 1860. And also that at the beginning of the campaign, soldiers wore straw hats given by the french Marine during long walks. After a few months, the straw hats were replaced by mexican traditional hats. I think maybe it could be useful in order to make different models of soldiers.)

Here 's a 14 pages article about Camerone. Lot of different pics here, uniforms, weapons, drawings and pictures of the officers in command during the mexican campaign : http://www.net4war.com/e-revue/dossiers/legion/camerone/camerone01.htm

I think some of them can still be useful for modelling, like these two :

The first soldier with red jacket like a soldier "against guerrillas".

Thx very much Enkerias !!!
Hope you will enjoy this addition that I made!

How are u players enjoing mexican/French conflict on the Map? I find some scenes/troops that I made more charming than others, actually
Gab
PS....hey BASKONIA....did U get killed or kidnapped by ur Mexican enemies??!!! U disappeared!

Àààà Lê Dương Pháp - French Foreign Legion. Use to love those guy . In history we has fought with them many time and they has prove for themself one of BADASS mercenaries in History  . Even they lose that war

Now i'm to busy. Has two Last Nation to conquest for Mr.Lin  . I will join them next time . Because there is no Empires in 18 - 19 Century has more connect to Great Nam (Vietnam last empire name from 18 century)  than French.

Hello i repost something i posted in the historical topic a diorama about french Legion in mexico, it is the best pictures i found so far and i compilated them with explanations on the grades etc.. hope it can help you

Yes, I saw and apreciated ur contribution there and now here (I love the French Foreign Legion and that is why I even dedicated a Topic to it!  )
It is NOT that I am ignoring some suggestions and corrections, they are all welcome.
It is NOT that I don t care.
But...I expressed clearly my thought and my desire here:

In few words: I made all that much of huge work for U all, right?

Now... I am very tired for the work done sofar...and low in free time...and I would love to sit back for a while and...apreciate a lot of activity from my fans, instead, see?

PS By the way, did YOU do anything of what I kindly asked?!

Sure i rated your mod and post a comment on MODDB, i post that link not only for you but for all the community, there is so much unemployed people in the world that somebody can have fun remake and retexture french uniforms, i'm wondering why not trying to make it myself but i'm just discovering wings 3D (i'm OK in 2D graphism but i m' a noob in 3D); anyway with a mix of existing uniforms of your MOD somebody who know to do it can make it quite easy !!! I was knowing the french expeditionnary corps in Mexico cause i'm french but never noticed that was same time as the civil war before your mod ^^ it is such a great idea to have all this rebs, Union soldiers, guerilleros and french same time. I think too that it would be great tribute to you somebody modelyze Garibaldi's brigade for you

I have been a modder a little  bit on baldur's gate and i understand you about being tired, but if somebody want to help you maybe he needs this info to help him.

And now i will just finish by saying thank you GABRILDURO and team for this stunning MOD !

Thx a lot again for what U did and said, Mate.
I also see ur apreciation and desire to help, really. 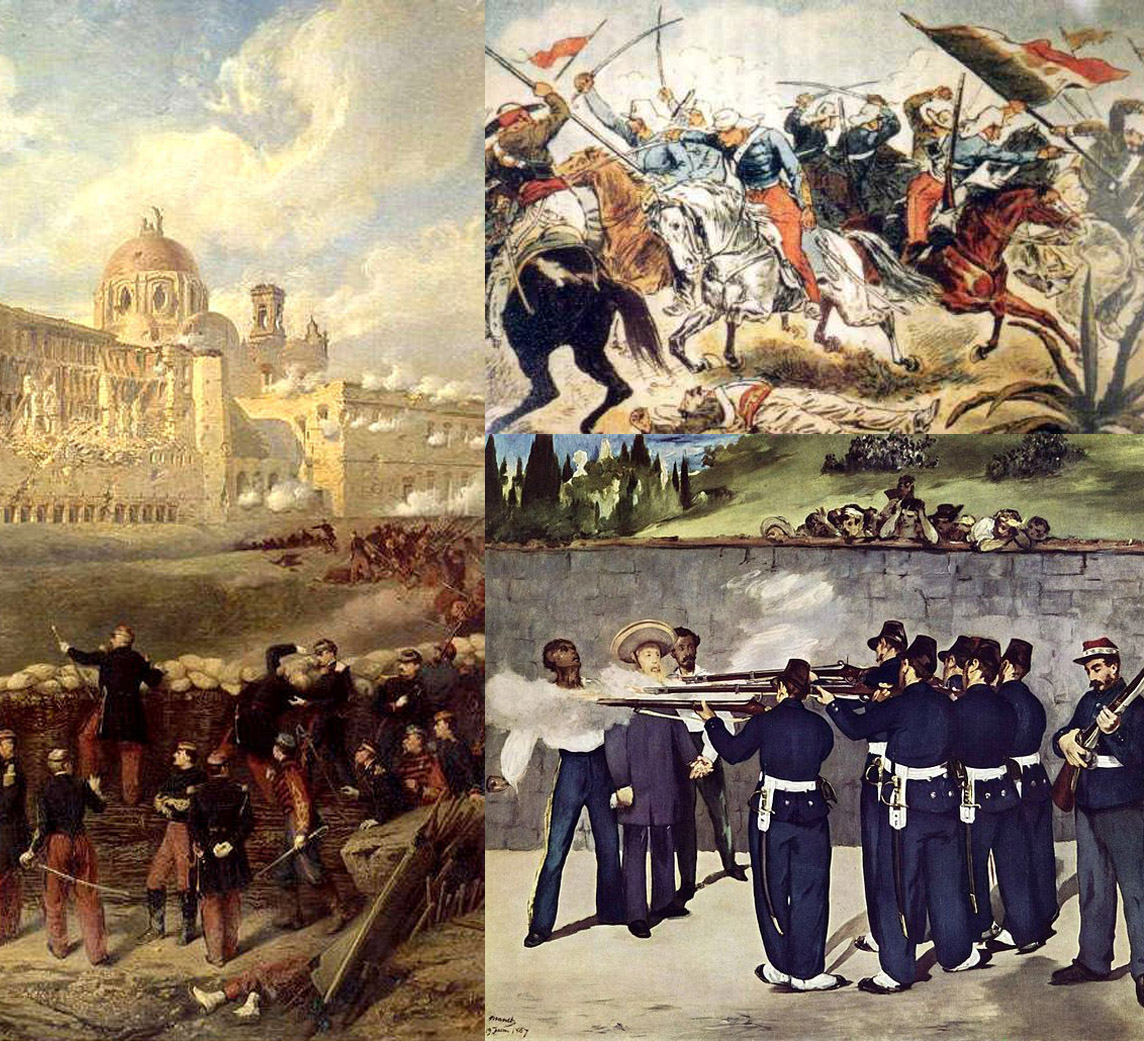 Thx for your always nice and documented pics, mate.

I tell U Mat:
U are what best can happen to a Modder!!!
Just watching ur beautiful pics that are all over my Topics, make me wanting to progress in modding so much!

Thx for always being around us Modders, motivating us and, about me, showing ur dedication and affection.