Abraxium said:
That's interesting, if you were to say køn in Danish among Swedish speakers, they'd think you were saying "the queue" as the distinction between that and "biological sex" (kön) is whether the k is soft or hard. Do you always pronounce k's hard and with a stød? Italian has the same issue but for gender and sex/intercourse (sesso)
Click to expand...

Always hard K. A queue is simply called 'kø' - which is a direct attempt to pronounce the french word (meaning tail). 'The queue' is 'køen'.

The move allows the city's law enforcement to be reimagined.

The Minneapolis City Council unanimously approved a plan Friday that would allow the city’s police force to be dissolved in the wake of George Floyd’s death.

While the council supports the move, the final say would lie with Minnesota voters in November.

Draft language of the proposed changes suggests that the council wishes to instead establish a Department of Community Safety and Violence Prevention.

Such a department, according to the draft, would prioritize “a holistic, public health-oriented approach” to law enforcement. If approved, the plan to form a new public safety force would not go into effect until next year.
Click to expand...

It sounds radical on the face of it, but hopefully there are professionals with relevant experience involved who can make plans for how such a department would operate, and have proper training. If it sounds like utopian nonsense, chaos or just the same style of police force as before under a different name, I doubt it will get voted through (if the last scenario were the case, one wouldn't want it to).

Division of Law Enforcement Services. The Council may maintain a division of law enforcement services, composed of licensed peace officers, subject to the supervision of the department of community safety and violence prevention.

There will still be cops, the only difference is they will report to some sort kumbaya committee who will soon realize running things is harder than protesting them.

DanAngleland said:
just the same style of police force as before under a different name
Click to expand...

That's kind of what I'm expecting, though frankly I don't know what to expect. Part of is intrigued because I've never heard of a Western government ever attempting anything like this before, maintaining law and order without police officers as we know them. However, the cynical part of me agrees with Kurczak in that it'll probably just amount to more bureaucratic bull****, which the cops will argue just makes their lives difficult (and they'll probably have a point).

Even if they really want to abolish it, they will eventually go back to having regular police. Conflict is inevitable among humans, especially in large cities and *some* conflict will always be resolvable by force only. There will always be a demand for conflict resolution. If they really truly abolish police, then the longer they stick of it out of ideloogical zeal, the more people will turn to organized crime for conflict resolution, tragically and ironically reinforce the status of "bad neighborhoods" and low social status of their residents, increasing segregation, poverty, bad schools and bigotry.

Alternatively by "defund the police" they mean, somewhat less money for police and somewhat more money for something else etc, but judging by this where the mayor is boo'ed and kicked of a BLM/Defund the police demonstration for saying "I do not support full abolition of the police", it is pretty clear what the activists' intentions are. The city might be trying to appease them just by renaming the department and similar tricks or they might really be giving in.

Ultimately any Western nation will invariably need some sort of police force, the difference will lie in how they end up responding to and dealing with threats. My personal preference would be for a greater delineation of roles within departments - currently (at least in the system in much of Ontario) you can have the same police responding to a mental health emergency and making traffic stops that would be suiting up for an active shooter situation. As I mentioned before a certain personality type tends to go for policing due to this, and it's not uncommon to see ego-driven army rejects abusing the limited power they are given in perfectly mundane situations.

I'll also note that, disturbingly, I'm seeing hardline conservatives jump on the "defund the police" movement not out of ideological reasons but to essentially privatize it, which is terrifying to me. The constitutional reform bill allows Russia's President Vladimir Putin to run for president again and bans same-sex marriage, among other changes. Opposition figures said the vote was marred by irregularities.

The constitutional amendments also include a guaranteed minimum pension, a ban on same-sex marriages, the inclusion of ''a belief in God'' as a core value, and it would emphasize the primacy of Russian law over international norms.
Click to expand...

The Kremlin also sought to boost turnout and support in the referendum by offering prizes, ranging from gift certificates for cars and apartments.
Click to expand...

Is anyone surprised that Russia is slowly going back towards the path of authoritarianism?

They never left that path.

I'd be more surprised if that weren't the case.

News that you may not have heard of:

Houthi rebels, who control the area where the ship is moored, have denied U.N. inspectors access to the vessel so they could assess the damage and look for ways to secure the tanker by unloading the oil and pulling the ship to safety. But the rebels recently signaled they would approve a U.N. mission to the ship, according to the U.N.

The U.N. environment program chief, urged the international community to come up with a response plan should an oil spill occur. The tanker could release four times more oil than the notorious Exxon Valdez disaster did, off Alaska in 1989, she said.

And: The fires aboard the amphibious assault ship USS Bonhomme Richard have finally been extinguished, after burning for four days.

That took a long time. After decades of mystery, the Russian Investigative Committee has concluded that they have found the bones and remains of Nicholas II and his family. The imperial family was executed during the Russian revolution. 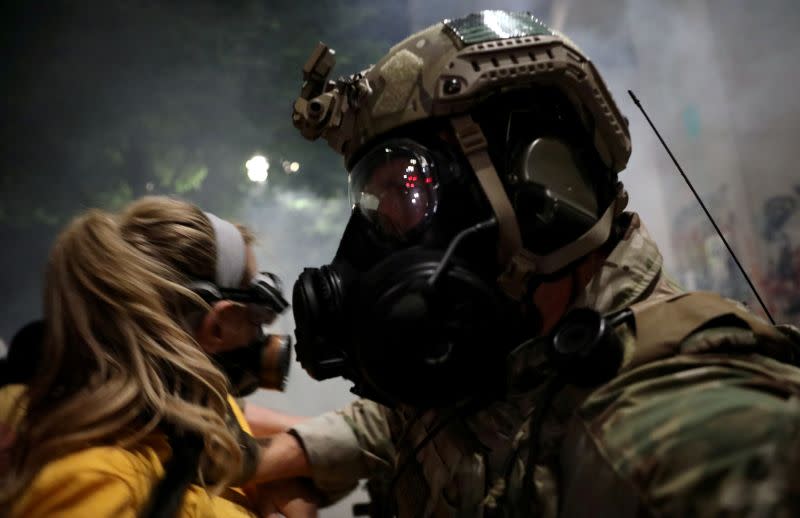 The documents, filed on Tuesday, helped shed light on what had been a secretive operation that involved days of violent clashes between unidentified federal law enforcement officers and anti-racist protesters outside a federal courthouse. The operation has involved the Department of Homeland...

****ing hell, America, stop pretending that you live in a comic book world. It doesn't look good at all.

It's ironic that it comes in the wake of the US clashing with China over their handling of the Hong Kong protests.
It's a level of fascist tactics we're not used to seeing in mainland US.
It's typically stories from their foreign affairs, such as their wars - Iraq, Afghanistan - and their love of supporting right wing dictators in South America, Indonesia etc.
It's pretty absurd that an expert on fascism has been interviewed on the matter 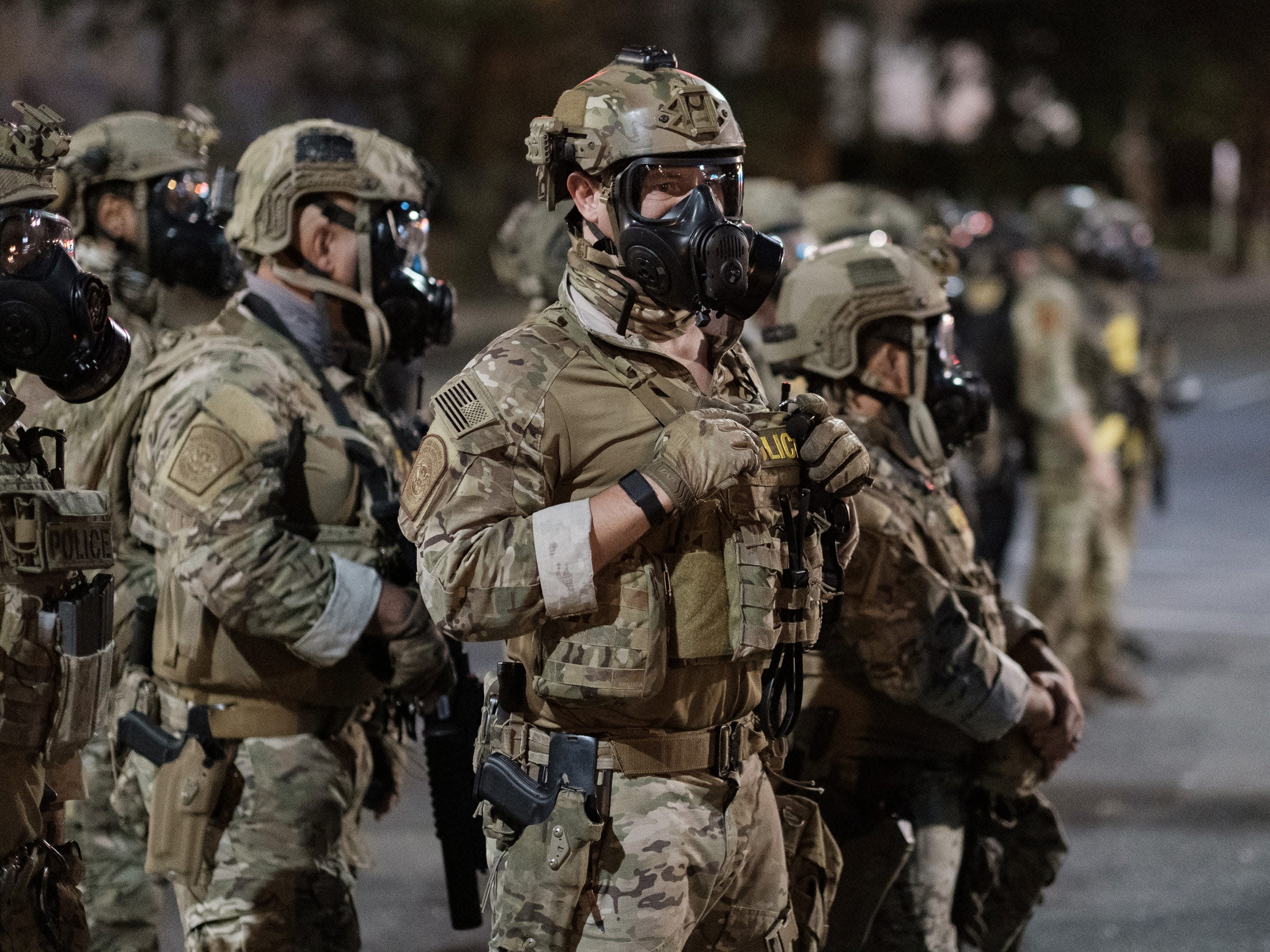 Jason Stanley, a philosophy professor at Yale University, argues that Trump's deployment of federal agents in cities such as Portland could serve to reduce voter turnout. Research suggests that voting declines in communities that have the most exposure to law enforcement. "One thing we need

"One thing we need to worry about is CBP and ICE being used to intimidate people at the polls."

Uh surely, citizens - the only people that have any business at the polls - have no reason to be afraid of CBP or ICE.