Realistically, a shield was not a wall that you would hide behind, (while backpedaling) but a piece of kit for both offense and defense, and for it to be used effectively, it had to be actively moved around. Shields have been a major issue of concern, and while measures like block-crushing and kicks have been used to address them, I think a full redoing of the shield system would be far better to tackle those issues. I realize that it is very difficult to accurately portray the complexities of shield combat, but I think a few changes could be made to improve it.

In order of importance:
First off, a shield should not be an invisible force-field of complete protection. The protection range of a shield should match it's model, and the player should have to adjust the positioning of his shield to intercept melee attacks. 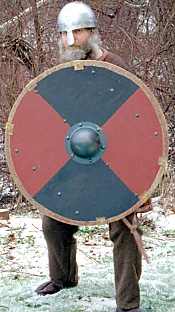 As you can see here, the head and legs are vulnerable to attack, and the shield must be used to intercept attacks to those areas. Long kite shields however would have more coverage and would protect the legs.
Some argue that this would essentially reduce shields to only be effective more blocking arrows, but that wouldn't be the case. The shield should use it's coverage hitbox to detect whether a melee attack goes around it or not. It would be easier to move your shield to defend than getting the right direction for a manual block, so a shield would still be superior in defence - it just wouldn't be an invisible barrier to stop all frontal attacks. This would solve complaints about shield-turtling, and add a more skill-based and interesting element to sword and board combat.

Secondly, I'd suggest that there be two separate types of shields: center grip shields, and arm-strap shields. Currently, all shields in game are arm-strap shields, which limits the options for shield defense somewhat. The Nord round shields at least should definitely be center-held. This would also be immensely beneficial to mods as well.
grip point for a viking shield: 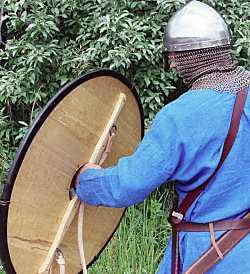 Thirdly: shields are an offensive tool as well as a defensive tool. A shield bash would be a pretty neat addition - essentially it is punching someone with the rim of your shield.

Another idea would be to allow for shields to be used to pin down an enemy's weapon arm, but that may be a little overpowered.

Fourthly: the encumbrance rating of a shield ought to be increased - the shields in the game only weigh around 2-4.5kg. However, a thick shield could weigh more than 7kg when dry. I'd advocate at least doubling the encumbrance of a shield. Also, carrying a shield can be pretty restrictive to one's speed, not to mention carrying several shields. Increasing the weight could help reduce the problem of multi-shield infantry.

Pretty much agree with everything. Also boot prices should be lowered. Shield should float so the player can move it up/down and sideways where it's needed. Shield skill would then add to the endurance of shields and shield recovery speed.

Definitely.  I've wanted shields to be an actual physical collision mesh from the beginning.

I used to think that making shielders defend at a certain height would make things too strange and difficult, but I'm not so bothered by that anymore - if anything it's probably good if shield defence requires a different style compared to weapon defence.

Agreed as well, away with these forcefields.

aye, all this have been mentioned before somehow/where and got mostly positive resonance. Really good thing to have it all well pointed out in one thread.

to give it weight, add a simple poll. I would prefer a simple yes/no, but thats in your hands.

I absolutely agree on all points. The only problem would be coding the AI to cope effectively. It's worth the effort, though.

Agreed, making shield combat a bit more active and skill-based would be awesome, and the forcefield is indeed somewhat annoying. I'd love if the old manual shieldblock-suggestion mountnhoof (I think) suggested a long while ago was implemented, but this would already be a step in the right direction.

Pinning down an enemy's arm would probably be too much already, shield bash would be good enough - otherwise there'll be people shouting for hooking shields with axes and similar mechanics as well, which would make combat even more inflated.

If the shielding system was realistically implemented (collision-wise), I guess this change would make picks more effective at striking past a shield while you circle an enemy, a small buff that would further differentiate these weapons from swords and polearms (though, since that would apply to axes too, in the current state it'd probably overpower the unbalanced longaxes even further - they should be toned down first, or balanced by realistic damaging areas).

NOOO not my forcefield

But seriously now, I concur 1000%. Away with those forcefield and make it more realistic.

If there are forcefields in front of shields just because the enemy is looking at me, then there should be flames shooting out of my ass when I run away.

Hell yes. I've wanted shields to be something other than passive force fields since the first game.

I declare my support to this suggestion, as it always bugged me how shields can catch bolts flying under their rim.

Agree. Invisible force fields are ruining all the fun for archers... I hate all those shootin bastards, but still prefer more realistic hitboxes =D

agreed, this is a fantastic idea i'd like to see implemented in the game

Bump: Sword and shield combat really does need a reform - there's obviously something wrong if someone can backpedal halfway across the map against an enemy while blocking all of his blows until his shield breaks. (I've done it before)

As a sword + shield user, I really think that the gameplay style really needs more elements to make it more skill based and more interesting.

It would help a little if it took at least 3 seconds to switch to another shield after your first one broke.  Not directly related but adds to the snorefest that is shield combat.

A definite yes for getting rid of forcefields i'd hope it's done for shields on horses also.

I know I sound like a broken record here... but I'll say it again.

Losing to a dice roll is lame. (i.e. That is what is being proposed no matter what "realism" spin you put on it.) And such a mechanic will drive players away. I know y'all don't believe that, but I do, and no amount of walls of text or illustrations will change my belief that a quality game is one where the player can easily identify the cause of his death, and hopefully learn from that mistake. With unblockable missiles the cause is of death is... being shot at while blocking? How does one avoid that, especially since people love to camp in (what should be) out-of-bounds locations. Oh I know... just camp somewhere safe until the time runs out... now that is fun!!!

Speaking from experience, when missiles regularly hit around/through the shield, I would play much more defensively. I would never attempt any attack that required crossing any open distance, nor would I ever try to lead a flanking attack by myself or with a small group of teammates. I would sit and wait around walls, or hide in buildings because venturing out was certain death. For me, playing like this is not much fun, the simplest aggressive move is punished with unblockable missile attacks... every damn time. This is a issue where gameplay is much more imperative than "realism."

Should spear thrusts be enabled while blocking with shield?
2