Probably your best course of action would be to PM Swyter and see if you and he can coordinate any actions.  I've got a revised conversations.txt file with 40-50 (mostly minor) changes to dialog, to reduce the "medieval" feel, and am working on the strings.txt file for other lines.  Even then, it's nowhere near a 100% solution, but should be a significant improvement to the most out of character dialog.  That's probably going to be the total extent of what I can do.

Oh, look into the item_kinds, there is a set of Clone-Commando-armor! Cooooool!

Back to serious: you are in, I guess?

"In" is a relative term.  I'm still making occasional progress, if that's what you mean.  I spent about another hour on it over the weekend, and that's about the extent that I can or am willing to dedicate time to it.  Give it another 2-4 weekends, and I'll probably be comfortable enough with the strings.txt file to hand both that and conversations.txt over to Swyter for inclusion in any future updates, assuming that he approves the changes.  If I do anything from there on, it's going to be minor (not that what I'm doing now is anything "major").

Lots of minor things can be a major improvement.
After I am done with actual tasks, I will have a look at editing the scenes, to get used to it again, maybe I can find some chests and other things. And from there? Who knows.....
I will update here.

A question about the items: Is there a way to get the hands on items like Darth Vaders armour or the cloak of the emperor?

Haven't done so (my game generally starts to get unstable and crashes frequently beyond some point), but assume from other mods that you need to rank up a lot and have high relations with the faction heads, then they'll make their personal supply chests available to you.  My assumption is that those "legendary" items are there as rewards, but they might be parts of high-ranking quests for the individual commanders.  You would need to have the rank and/or relations to unlock those missions.

I've been playing this mod but not finding it fun at all. Every battles starts with every single enemy unloading on me. I go down in a volley of gunfire before I can even do anything. Even if I do get to cover somehow the enemy just rush forward shooting and my guys have stormtrooper accuracy or something. I cant get any money, bandits move faster than me even when I'm alone, and coming from warband the animations look mad, I can never tell when someone is swinging or feinting and my character randomly decides to do a little twirl when I swing, causing me to get hit in my face while I'm doing my excessively long weapon twirl. I also tried some bounty hunting but I have to talk to them first and then they immediately smack me in the face before I can even do anything since the conversation makes me sheath my weapon and then I have to unsheath it while they are swinging at me, and if I am on a speeder angled away from them so I can immediately speed off and get to cover then they shoot the civilians and I get the blame for it

The start is a bit brutal, but you should be able to trade a few key commodities (until you get a faster ship, sensors are absolutely critical to see pirates BEFORE they spot you), then hire a couple of local faction troops (or even better, companions, if you can afford the hiring price), then try to take on a same-size or smaller Jawa gang or such that's not completely out of your league.

The trick to not getting slaughtered in seconds is to strafe-move or sidestep constantly, only pausing for the moment you take your own shots.  If you take on a mission where you have a one-on-one fight, start the conversation from maximum hailing distance, then backpedal and side-step, so you've got a few moments to draw a weapon.  I avoid those missions, most of the time.  I also prefer rifles, where I can snipe from a distance: move and shoot, move and shoot.

Once you can afford a decent military speeder bike (not the unarmored one you start with), ground combat gets absurdly easy for taking on small to medium size groups, because you simply run over them repeatedly and knock them unconscious, while your allies draw most of the fire.  If you equip your companions with shields and pistols, they'll survive a lot longer while you play "bowling" and knock down most of the pins yourself.

Wow, thankyou for the info! What do you recommend I sell?

There's no fun in abusing trampling to win. On the other hand, line shooting matches get tactically boring as well eventually.

What kind of things can I sell? And what units do you recommend?

I got General Kota but he got stomped by jawas and stormtroopers, he's really pretty awful from what I remembered him. Is there any point to going jedi or is it just like a vaegir lightsaber wielder running at a line of Rhodok sharpshooters? There are offhand lightsabers but I cant see them soaking up many shots, and the mini shield break in 2 hits and barely cover anything since theyre like half the size of a huscarl shield

Also is is possible to make my own faction since it isnt warband?

Edit:
I've been making a killing selling oil and hydrospanners to Manarn from Corellia and Serapin. It was a bit tense at first since I was so slow, but then I got a 100 accuracy 90 damage rifle and realised I can take cover behind a container and just pop out and gun peeps down, down I've loads of exp and cash!

Edit2:
Equipping my companions with civilian cruisers and keeping 5 of them in my inventory has increased my speed by 50%. I guess it's a relic from native or something

I've got a really good strategy down. I start a fight with like 50 novatroopers on my ship then force jump left towards cover. 2 jumps later I'm in cover and I order my companions to charge. They tend to meet the enemy halfway and form a big blob which I just fire into aiming for the head area, sometimes I hit companions but its fine. When my companions are all down I keep well in cover and just keep popping out and taking a shot with my 90 damage 100 accuracy sniper rifle. A few enemies rush my position but I have a plan for that

My rifle only gets 5 shots between reloads and it's slow to fire and reload, so I get stunlocked by melee enemies, but I have master force powers and a lightning as well. If someone comes rushing in I quickly switch to force lightning. You don't even need to aim it since it has a very big hitbox, although I've noticed jawas and tusken raiders have weird hitboxes and sometimes shots just pass through their chests, against anything else I can just spam lightning and obliterate anyone in front of me if they are close, I get 30 shots and no need to reload it. When I'm clear of any melee enemies I just go back to cover shooting the rest and get a ton of exp. With 10 force power I one shot anything with force lightning and can fire 3 shots a second, if someone is trying to melee me they pretty much are close enough to fill my screen, then get hit for 100 damage and die, it's far more effective than lightsabers, just that it requires a slot for my powers and a slot for my lightning. I might just use 3 force lightnings later if I get my force power weapon skill to the point where I can make precision headshots at 50 metres or something like with my rifle

Edit 3:
Well, this is a strange situation. The GE has the RA in lockdown but no one is forming warbands so no territory changes hands. I joined the GE and took over a planet but no one is making any effort to take it or raid my villages. I have 300 recruits in the garrison and just enjoying my extra income from tarriffs and rent

Any info on the port to warband? I think I read a while back that you were working on it or is it TLD that's getting the port?

Swyter has done an amazing job porting TLD to Warband, so I hope he can do the same for his own masterpiece.

Am I the only one who would like a SWC-like game with the graphics of the new Battlefront 2015? 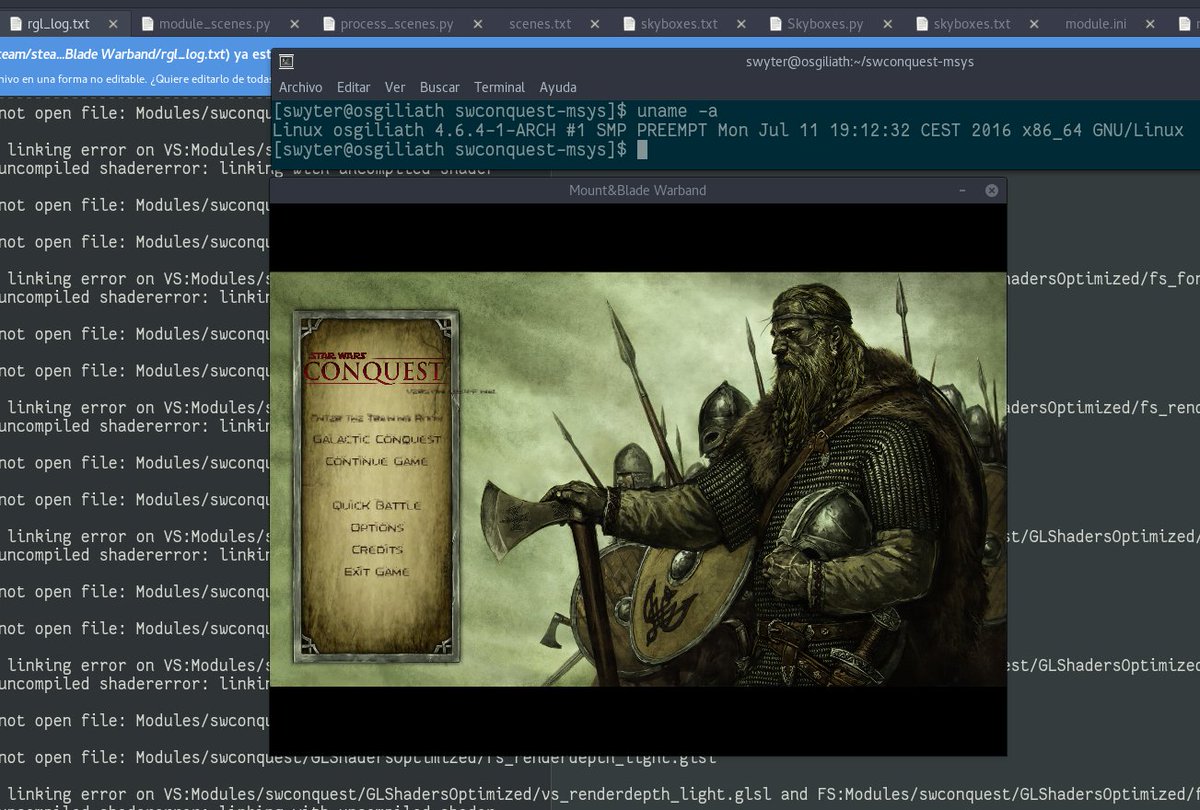 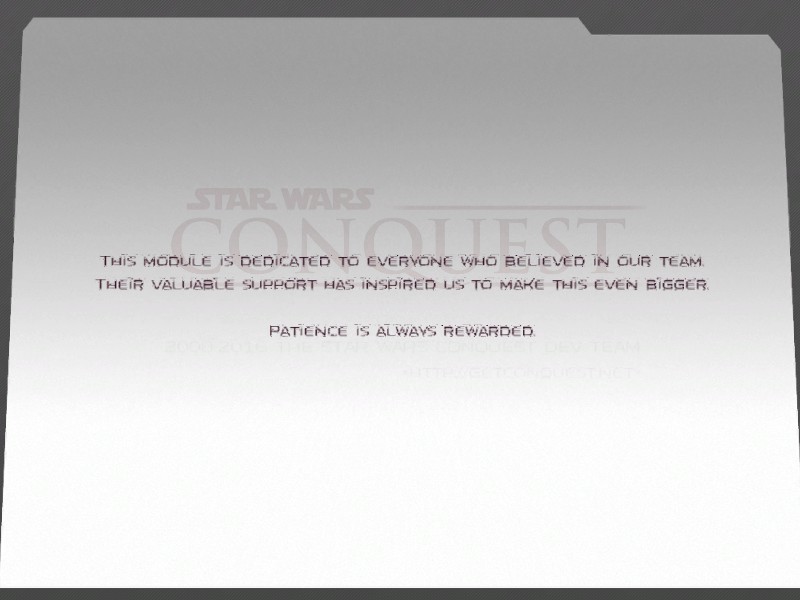