Here it comes. Let's hope EA won't **** customers in this game with ****ty prices and sales management. (Like as if it's possible )

I saw this, and it looks good but i wouldn't pay 60 clams for it. Also, I'm not sure how much faith I have in it, to quote a resident discordite:
[quote author=Exima]
Exima - Today at 5:22 PM
NO way they'll pull it off.
it would need to be at least double the amount of content the last battlefront EA had
And if they AGAIN don't include galactic conquest, people will riot
so it's triple the content
[/quote]
I think I'll stick with Bear Force tbh.

So if you pre-order this you will get Star Wars: The Last Jedi's heroes. Well done EA.

I heard that they had 3 different studios working on different parts of the game? IE Dice for multiplayer, and some other company for single player? Is that true or bu****?

It's true. Jade Raymond's new studio is making the campaign.

Hmm, the trailer is better than the Episode VIII one.

Galactic conquest or no buy.

For the details confirmed, or stated in the livestream, so far so good. I was a bit disappointed with no gameplay trailer (it was in-engine extended trailer that mostly focused on the singleplayer campaign from the leaked one) but figure that will be later in the summertime. No season pass was apparently confirmed by the devs but I'd have to find a source on that. Only thing I am not pleased with is the pre-order incentive for the deluxe trooper edition, it is basically pay-more-now-to-win-easier-later with less grind time for progression, could effectively cut out the progression for upgrading your trooper over time. What's the fun in that? That's actually concerning how upgrading works. One and done or use 'points' and choose? A lot details on the updated website. 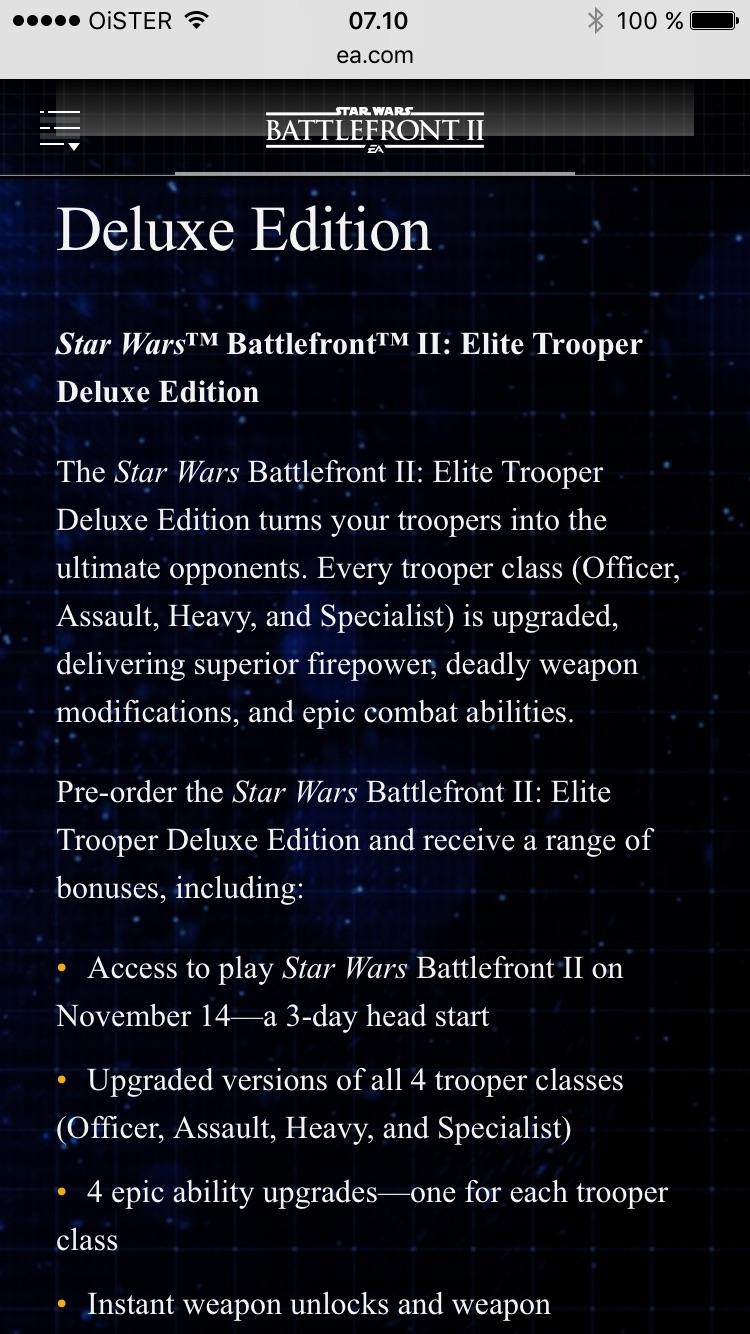 The maximum player counts are still 'compact' with possible AI bot additions on ground. 40 players max again. 24 players for space battles and dozens of AI pilots. Possible capital ships like old BFII. Hopefully putting the engine to the test for limits, as right now, improvements and fresh ideas are key to new games. No co-op splitscreen for PC version is a bit of a bummer as well, the game would need a very robust anti-cheat to keep hackers at bay. But if there is no season pass planned between now and November 17th, that is great. The season pass always divided the player base population by the haves' and have-nots'. A lot of agreeable features though, singleplayer campaign, 'all eras', class system and upgrading, etc. The more details EA/Dice/Criterion/etc can reveal over time about the content as a whole before the game releases end of year, the better.

Besides my general praising cautionary optimism, there is one thing a triple AAA EA/Dice game cannot or will not include. Modding, and 'legends' content. Battlefront II (2005) may have competition now for a player base, but mods' content will ensure the original sequel game is not left behind. The new 'reboot' game will bring ideas for mods from the singleplayer campaign and such. The Bearforce II Warband mod has continued to be successful in further updates and content additions, and for the Warband game, it's the best way to get the Star Wars multiplayer fix before Bannerlord.

Nice, the Battlefield classes have finally arrived (back) into Battlefront. The campaign's apparently canon as well.


BenKenobi said:
Hmm, the trailer is better than the Episode VIII one.
Click to expand...


Cioss Julius U.X. ? said:
So if you pre-order this you will get Star Wars: The Last Jedi's heroes. Well done EA.
Click to expand...

Apparently it's just cosmetics. This and more: https://www.youtube.com/watch?v=KBpvIyLi7Ks


usnavy30 said:
The Bearforce II Warband mod has continued to be successful in further updates and content additions, and for the Warband game, it's the best way to get the Star Wars multiplayer fix before Bannerlord.
Click to expand...

Isn't MovieBattles II still a thing? That was pretty good, back in the day.

There's quite a bit of info here.

Could they not have chosen any other name?

Don't worry, next one will be Battl3front.

So that's why we don't get HL3 because it's actually Half Lif3.

They should have gone with 2Battle2Fronts

Spec Ops: The Line was actually pretty good. I couldn't finished it yet tho but I really liked that.

They really like to change their mind on stuff like that. Don't take their word for it.
You must log in or register to reply here.

Yesterday at 11:28 AM
niekdegrijze