Spectator tools wishlist, originally made in 2020, and now with notes from 2022

I found an old document of what I wanted for the streaming tools back in 2020, I usually write massive walls of texts ranting, then just delete it. I've written this exact document with a few differences countless times since Bannerlord "came out", and since I cant sleep, Its interesting to see what has changed in the 2 years since I wrote this.
This was just a first draft, excuse any spelling errors etc.
2020 comments will be colored in standard black, and 2022 changes/comments will be colored Green

What should be reworked
- Transparant background
There needs to be a transparant background surrounding the score, faction banner,timer,flag icon, and morale. That way, the streamers can use the same transparancy when making the overlay to smoothen out the look. Otherwise its gonna look like this, which looks very poor.

(very much a work in progress, just have no idea how things are gonna look so I threw something together as a temporary thing)

Still needed, no change there. Actually I think they did shift some icons like a couple of pixels because my old overlays didnt match, so I had to remake them.
And yes I always use Wolfpack and DoF as examples when I do these things

- New class icons
They look too simmilar to eachother so its difficult to tell the difference, especially between the light and heavy variants.

Also still needs a change, hasnt been updated since launch, its still difficult to tell at a glance what class someone is just by looking at the icons.

- Kill feed
Right now the kill feed looks messy and its hard to follow. Its atleast twice as big as it needs to be and often it can be confusing when mirror factions are fighting.
Easy fix would be to use the same system warband did, but if you still want to change it, you can add the colors of the faction behind the name. 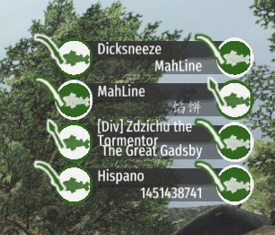 This is an absolute mess, its the same with unit colors. Impossible to tell who killed who, and what weapon was used.
Something like this : Class icon - Name - weapon used - headshot if applicable - dead name - class icon. Change the border

Im guessing the reason the box is so big is to make the insignia fit, but the insignia is the least important information there.

Also unchanged, if anything I think the kill feed dissapears faster now, and we lost the "You were killed by" in the top left corner, which could be used for some really cool things. Shouldnt have been removed.

- A visible indication where the spawns are.
If theres a clan match I would reccommend having the logo of the clan displayed on the floor/ground at the spawning location.

A man can dream, I dont think this will happen, but its a neat idea. Could also be used to show sponsors if it ever takes off. Not super important of a request, but would be nice.

- Camera currently is very poor.
- The camera refuses to go through doorways and entrances, basically wherever theres a roof. This definitly has to change.
- Once a target is dead, the camera stops following people. I reccommend the camera automatically following the one who killed the target.
- Needs more spectating options, in particular first person. Theres multiple benefits to being able to see a player perspective through first person.
- Button to slow down the camera. We have the speed up button on Shift, we need a slow down button aswell, to make more cinematic shots of fights.

- The camera now works for the most part. It struggles with certain maps on Battle, but I assume that'll be fixed with the next patch.
- It still doesnt find a new target to lock onto when your target is dead. I'd say its a relatively important QOL feature that should be added at some point.
- Definitly still need first person spectate.
- Also definitly need a button to slow down the camera, the camera itself moves pretty quickly, and sometimes quite sharp.


What needs to be added:
- Names of teams next to scores (assuming this will be easily added with the clan system thats being created)
- Clan banner and insignia
Displaying this properly might be difficult and I dont know how the clan system, nor the multiplayer banners will work as a finished product, but having your clan banner displayed on your shield was an incredibly distinguishing feature of warband, it gave players the chance for some individuality that Bannerlord is currently missing. The current system (the random animal) is pointless, as nobody will ever take any notice what animal a player is. It would also be good to have the clan insignia displayed next to its name on the top (but not replacing faction banners)
This can also be created as an overlay by the streamers, but having an options menu where you can swap the sides quickly is an absolute must.

- Names of players visible ingame (maybe something as basic as a perma alt toggle)
It also needs an outline surrounding players through walls to make it easier for the viewers to see archers.

- A way of showing total score and not just the score of current set.
When side swapping becomes a thing (and it MUST become a thing) the score shown has to reflect the overall score aswell, not the score of the current set in order to avoid confusion.

- Still hasnt added the names next to scores, I assumed this wouldve been added because of how rigid the system for arranging clan matches was at the time, and still is. I was hoping they'd completely remake the system at some point and use a "clan match creator" lobby with both teams joining the same lobby, where maps, factions, teams, spectators etc could be selected, more in the way Overwatch did it. Still hoping that'll be a thing, the current system isnt very good.
- We have insignias now, but theyre still pretty generic. I assume we'll see more of these over time, but honestly 90% of the time I forget what insignia I picked. The only one that stands out is the heart. Still hoping for people to be able to stand out using their insignias like in Warband.
- Toggle alt to show names is a 100% must to create a good viewer experience. Please add this.
- Surrounding outlines is also incredibly handy and would improve it significantly. Maybe abit of a luxury.

- Side swapping using the clan match system still isnt a thing and it absolutely has to be. Nobody will ever play a match with only one set per match, this should've been added with the release of matches honestly. If theres a struggle with warmups etc, do a /ready system for both teams. Having the streamer system keep track of the scores would be incredibly nice.


- Mini map
One of, if not the most overlooked feature the Warband streamer mode had, the mini map let the commentator know where people were and if an early kill was about to happen. No clue why some commentators turned it off, even with the minimap showing incorrect background it was such a great tool. Its also great for viewers to see potential positioning etc.

- The kill streak feature
Warband streaming module had was a great little feature and should absolutely be recreated for Bannerlord. For every double, tripple, quadra etc kill etc, your character model would pop up on the bottom screen for the streamer with their arms crossed. Made it so much easier for people to see who did great that fight, made the players get more recognition, and made it way more hype. Honestly this could be shown for every player, atleast in TDM, Siege and Skirmish to showcase whos doing well.

- Also still true, and could potentially be a nice progression unlock or even monotised (people might hate me for that one)

- Everyones hp has to be easily visible to the viewers.
I would change the colour on the top, below the player icons to make it stand out more. Also adding the health of the horse below the rider on another health bar, adding the shield hp (make it yellow) and amount of projectiles left would also be very nice.

Yep, the health bar isnt very clear, peoples health should be very easy to see on screen, right now I dont think it is. Adding the health of both teams is obviously a must, and a little bar with the horse is needed. The projectiles and shield health might clutter too much.

Player info:
Player information that should be easily visible and clear, but also show as much information as possible. Absolute neccecity to show is
-Player name
-Player class
- Player health
- Player shield hp, horse hp, current gold and projectiles would also be very valuable and should be shown (preferebly with a toggle so the screen doesnt get too cluttered)
- Peoples steam profiles should also not be shown, as its incredibly easy for players to make their profiles display offensive or pornographic content. I reccommend replacing their steam profile pictures with their ingame character. The animal thing we have now is as mentioned, pretty useless
- Kills/Deaths (assists are secondary)

I was pretty close with this one I guess, the profile picture thing atleast. The players face would be way better than how it is now. Still worried it might clutter abit too much, but that can be played around with. Toggling it would be handy.

The goal should be to click TAB as little as possible
I would also change the way the top bar looks for the streamer. Having the names on a list on the sides would be more clear and you could show more information. Again the Warband streaming module showed the information in a very clear way.

Maybe, the top bar thing isnt bad, but like I said the goal is to tab as little as possible, especially because the scores when you tab dont line up with the live rounds, so without an ingame overlay built into the game itself, people will be able to see the disconnect between the spectator tools and whatever the streamer created.

Honestly not much has changed in the last 2 years when it comes to these things. Not that surprising because we havent had the tools yet, I supose, but I thought it was interesting to see anyway. Besides I cant sleep so what else is there to do at 5 oclock in the morning

I wonder if there could be another tab in the chat feed where there’d be chat, combat details, then killfeed as a 3rd option. This is more for playing rather than spectating.

I’d also like if the spec camera followed players’ POV in battle like it does in skirmish, this makes spectating good players to learn a lot easier.
You must log in or register to reply here.

Is Vlandia still op in TDM and siege now?