Some helpful tips for new players on dealing with bandits and their hideouts.

Hello, I would like to give some personal tips for new players that have made it easier to complete the bandit hideout quests and dealing with the bandits in general across Calradia. Please note that I am still learning the types and strategies, experimenting, so there are probably better ones out there but this is what works for me. Feedback appreciated!

Developers have recently updated the game so that if you die / fail taking the hideout, you will not be their prisoner if some of your men are outside the hideout.

These guys are upgraded from Warband in that their rocks will damage you more and they seem better at throwing them too. Their ai will still charge at you at the beginning of the battle though but you can clump them up together in a circle and deal with them like so if you want. Here are some other ways that you can deal with them easily with the following requirements:
Bandits & Mountain Bandits

A step up, you should take some caution with these guys when raiding their hideouts. They have throwing weapons and those can kill off some of your troops if you have them charge head on. I haven't seen them much on the map yet but they do exist. The last time I encountered was in Battania during a merchant caravan quest, they tried to attack us with their horses but my army alongside one of the Battanian lords wiped the floor with them.

Sea raiders have harpoons and throwing axes, better equipment in general. I found their hideouts to be a little easier because the map used is on the coast and most of them are inside. Get your archers to attack from a distance and then move in with infantry (have them follow you, don't charge unless they are bandits are low in numbers). On the map, these guys are prevalent in the Sturgian lands and Vlandian (westernmost coastal areas after Pravend, lots of looters and sea raiders with a hideout even).

I avoid these guys like the plague (unless 2-3), only attacking their hideouts. They have laser-like aim and deal a lot of damage, will wipe your troops out if you make a reckless charge. You must have a ranged weapon + shield to deal with them when attacking the hideout; press the z key to crouch and sneak around. Pick your fights and pick their arrows up once you run out. Safe to say, they should be nerfed and a lot of people complain about them on the forums.

I haven't fought enough of these guys because I don't go towards the Khuziat lands, however I had to engage them for a quest and they are horse-archers. Their ai is a lot better than in Warband, they actually will harass and circle around their enemy. They target your horse primarily, trying to kill it so that you will be on the ground at a disadvantage.
I haven't done their hideout yet, if they have any. They probably will use their bows and throwing weapons if any I presume..

There are quite a few other type bandits, more than I would like sometimes. For example, I have yet to fight desert bandits because I haven't gone to Aserai as much but they operate as cavalry and would probably use bows with "jereeds" as deadly throwing weapons.

If you press "n" on your keyboard, it would bring up the in-game encyclopedia and going towards "Occupation ---> Bandit" would allow you to see a list of bandit units, some that you encounter in the hideouts and others that are recruited and trained.
Loadout and final words

My main weapons to deal with the bandits and their hideouts is currently a Simple Short Bow, Piercing Arrows, Northern Round Shield, and Early Retirement (a special tournament sword that you can win with really good stats for my early - mid game). I need to buy a better bow and arrows but the shield has not broken or been damaged as much yet.

THE SWORD (one-handed and two-handed stats) 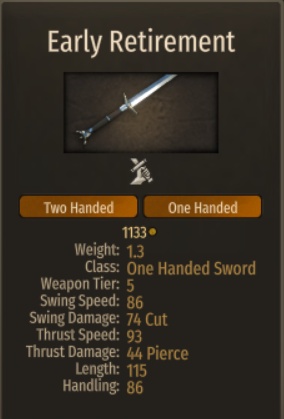 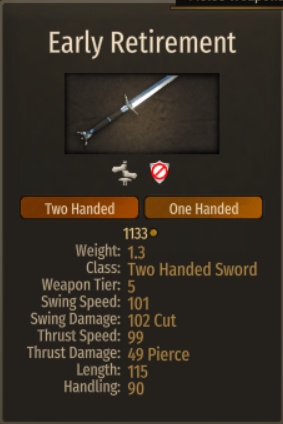 My armor is as follows, though I need to upgrade some of it and am saving up money right now: 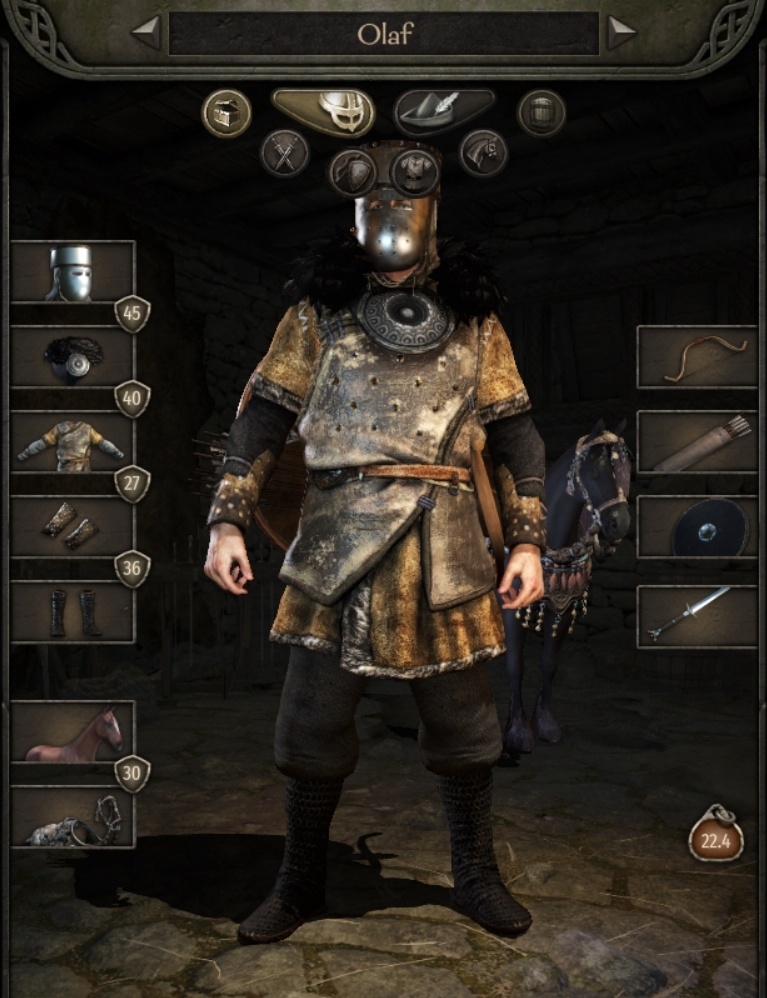 ONE FINAL THING, DO NOT UNDER ANY CIRCUMSTANCES DUEL WITH THE BANDIT CHIEF UNLESS YOUR HEALTH IS VERY LOW AND YOU KNOW THAT YOU WILL DIE TRYING TO TAKE ON HIM AND THE GANG WITHOUT DUEL. I WON A DUEL AGAINST A FOREST BANDIT CHIEF WITH ALMOST ZERO HEALTH BY BACKPEDALING WITH SWORD AND SHIELD. IF THE BANDIT CHIEF HAS A TWO-HANDED MELEE WEAPON, BE VERY CAREFUL NOT TO TAKE DAMAGE.

HAPPY HUNTING :>
You must log in or register to reply here.

My troops are morons

Why was the Pilum made into a spear?
2