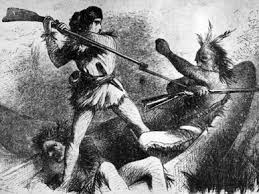 The Smiths are a proud and powerful family, We encourage role play in the mod and seek for fun times and to destroy the Gordons our mortal enemies


History​
The Smith clan arrived from Britain in 1703 fleeing religious persecution in Britain from the Protestant Church. Landing in Maine in 1704 the Smiths lived a modest life as hunters and farmers in the wild forests. They all learned how to shoot the Kentucky Rifle with great effectiveness. Life was turned upside down when Scego's father joined the British Army to make some money. He brought Scego's brother nicknamed Mad with him. It was the last time he saw his father as he was shot on the battlefield. Mad was taking into the Mohawk tribe while Scego stayed as a expert hunter  however one day when Scego was 15 a group of outlaws came to the house and in the fight where many outlaws fell to the expert shooters but they broke through and killed Scego's Uncle and mother. They chased Scego but he lead them on a merry chase and with his rifle started picking them off. The outlaws stop pursuing the expert ambusher. Scego shadowed the surviving outlaws and one by one he killed them one a day to increase their fear and left a sign on a knife as a symbol that he killed them. The locals called this unknown man 'The Ghost Of Maine', He left the outlaw last who by now was scared out of his life. He trapped the leader and in the duel cut of his hands and then with his poisoned dagger he stabbed him in the leg leaving him to die a cruel and long death. Scego hates outlaws and kills as many as he can in revenge for his Mother's death. He became a rich man and owned a large trading company however British tax made him do his business illegally. He got his brother Mad to attack rival shipping companies in order to increase his profits however the British after dealing with Mad came after Scego. Thy raided his house but Scego killed one before escaping. Scego's empire was in ruin so after hiding in the woods for a while he decided to leave for the Great Plains of Carolina. He dodges British killers every day and plans his revenge. Once again British spies have hunted him and his family down he flees to Brazil hoping to find refugee but finds none.

1. In-Game Name: DarthTaco, Sighvatr, Robert MacGregor
2. Continent: North America
4. Previous experience: I've served as a mercenary Marksman in many a King's armies, but have also aided in leading cavalry into battle.
5: Ranged Skill 1 to 10: 8.0
6: Melee rating on a scale of 1-10: 7.0
Friends in Group: None

Welcome to the clan

Rivarel is my steam name.

Added both of you

Please make your own story here

Born in 1700, Robert Smith came along to join the Smith Clan at a later date, Robert did not venture to the colonies at his own free will. In fact, it was a war  that landed him beaten and bloodied on a British ship inbound for the Colonies. He'd grown up in the Highlands, his father teaching him the skills he'd need to survive. He was taught to shoot, hunt, fish, and survive on his own with minimal equipment. When the year 1715 came to be, however, the Jacobite Rising occurred. More than willing to fight alongside his family Robert soon learned the horrors of war. During the Battle of Preston, Robert's father was killed, and two brothers hanged for treason. Robert, alone, was sent to the Americas on a prison ship. Once dragged to the deck of the ship, after a daily beating of course, Robert was given two choices: Be hanged for treason, or join the British army. He swallowed his pride and chose the latter. He was sent to the province of Maine in the colony of Massachusetts to combat the Penobscot Tribe. His tour did not last long. It was only three months into his service when his Company was ambushed while on patrol, but luck again favored Robert as the Natives spared his life and adopted him as part of the tribe. As years passed, and treaties were made, the Penobscot were made to release all White "prisoners" in turn for peace, so Robert now found himself with no family, no job, and no claim to life, but when all seemed so grim, he'd got word from his cousin Scego. Brazil was his new destination, and all Robert hoped for were plenty of British to drag to hell.
You must log in or register to reply here.
Share:
Facebook Twitter Reddit Pinterest Tumblr WhatsApp Email Link