If anyone else has a dedicated server they would like to host this mod on, by all means just do it, and drop a note in this thread about it. I do not have the time or resources for it right now - maybe if I ever get an actual dedicated computer for things like this it will happen. It is not a very big mod, and I think I have everything trimmed up enough to run smoothly (namely particles). Thanks!

Deadly blossom sighs.
Beneath the shadow are roots.
Roots demand your blood.

* Nighttime maps. Lots of shadows.
* Nighttime ambience... crickets, frogs, owls, wolves, nightbirds and wind.
* Characters take only 1/10 falling damage.
* All characters are ninjas. I want this mod to focus on being a master of all weapons, and therefore any character will be able to start with any weapons, and a horse if they want it. Going in unarmed and trying to survive off of what you can find also has its charms.
* Stealth: All grunts and yells have been removed, as have footstep sounds on normal ground, on wood or in water - no more being given away by your character screaming just before you deliver a deathblow. Death screams still remain.
* New kingdom flags.

* Crossbow doesn't animate. There are ways to get around animation software for .SMD files, but apparently not for .AMD files, which are what is used to animate crossbows. Tough break until I can figure out a way...
* "Dual" Weapons - These are actually shields, and held in the left hand, and they do have hit points. No way to really implement dual-wielding yet.
* Everything costs only 1g right now. I'm not sure if this will change - the game doesnt bog down into a gold-struggle to get good equipment. You just grab and go assassinate.

Props to apsod for the inspiration, and to Thomak, who apsod got his idea from!


CHANGES IN THIS VERSION!!!

* Metsubushi have been added - they will blind anyone within a couple feet of impact for five seconds.
* Bigger smoke from Kemuribomu.
* Removed weapon drawing/switching/sheathing sounds.
* Fireworks particles switched to sparks - they look much better now.

When did I say that I had other plans? I only said that I would still be the lead developer...

And I told you I don't work well with others. This thread is not for arguing, I said I have to go a different direction. No offense, but I can already tell it wouldn't work out anyway.

Nice!
It's a cool idea, a common idea, but good to get it done (hopefully ).
I think real, thick darkness is needed for this. The common M&B night isn't really dark at all in my opinion. You may prefer playing around with the PFX options or use a light black fog to decrease the range of sight. Also some scenes that fit for ambushes should be included, like a thick forest with lots of small hills, stones, all the stuff. Or a town with low roofs and rather thin streets.
If you don't feel like doing scenes yourself I'm able to do them.

Well that's it, feel free to PM me or let it be

That, and I think one side needs to be Samurai, with a mission structure to give rounds meaning- sort've a Japanese Counter-Strike with ninjas and fast-paced combat, throw in a few polished level designs, and voila, it'd be a good game

Alot of close combat maps where you never know who might show up behind the corner.

I like the idea of smoke bombs. Would they create a small amount of localized fog, or release particles?

Particles. Basically it would be a throwing weapon that emits particles for about 30 seconds from the location it lands when thrown.

I'm working on the loading screens now. Believe it or not this is already almost ready for release.

Err, what's with the eyes? They are seriously freaking me out.

I made a mini OSP shuriken pack a while back, feel free to use (or not use), modify, whatever.......

Got a shuriken, but thanks!

In fact I pretty much have the model making covered - we have room for a few more weapons/shields though, so everyone throw those suggestions at me. I've pretty much covered everything. Chopsticks might get added, and egg-style Metsubushi, and smoke bombs as I said.

Also I should point out that the Fukibari counts as a firearm in this mod - it was a good excuse for making its attack silent, since I would have to script in the sounds for any other weapon. Also this keeps its ammo exclusive.

I might add a pistol crossbow, but the animation still looks like a crossbow when you run with it - like he's carrying a longer weapon rifle-style... not sure how to fix that.

Fix it by making a new animation. Yes it's a lot of work and No, I can't help you do it. There is a tutorial here in case you're interested.

That second to the last one is priceless. NINJA STAR!!! 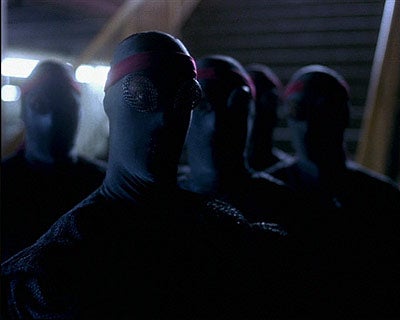 The wire eye-covers are for eye protection, and simultaneously provide the ninja with a shocking appearance.

Besides I think they look better than a plain cloth mask.

If you feel particularly generous, you could model a few variations of ninja gear to choose from, that way everyone gets their way if googly-eyes aren't their thing.

The point of the armor is camouflage - you'll see when you play. This stuff blends in very well, especially because a ninja can be looking right at you, and there is nothing you can recognize as a human face. Add a bush or dark shadow and they disappear almost completely - they evade the eye long enough to make a killing blow.

Uncovered eyes reveal one's position more often than you would believe, and so the only rational thing to do is to cover the eyes. A Fine wire or cloth mesh works great.

While there is a certain amount of "cinema" in this mod I am also relying on true guerilla warfare tactics. If there is an open field between you and your objective, you become a part of that field. Same goes for shadows.

There will likely be some texture improvements in the future, but overall I am satisfied with the "ninja invisibility" factor of the equipment as it is. The sleekness causes the eye to be drawn to the background, almost as if the ninja isn't even there...

You'll see. Barring some major changes I should have this released tonight, and I plan to host it locally for a few hours.

N0ught said:
*** Props to apsod for the idea, and to Thomak, who apsod got the idea from!
Click to expand...

Added screenshots of each clan - I DID make six separate helmets, as you can see, so everybody should be happy.

I'm going to check a few more things and then upload a release. Then I will host a game locally (no dedicated server yet - let me know if you would like to host) for at least a few hours - might leave it hosted all night so people can have some fun. I have a quad-core with 3.5 mb Ram, so I think I can handle it.