Oops.  I fear I didn't make myself clear enough, which is a mistake of mine because I generally tend to focus on the Greek theater in my interests. I kind of left out which faction I was speaking about, which is why I had mentioned 'I don't know about other theaters', but failed to specify my exacting context.

We should acknowledge the fact that (Most, if not all?) greaves in the Greek theater at least, were held on solely by the springy tension of the metal itself. This might have been the case with particular sets elsewhere. In fact, @matmohair, your first picture seems to demonstrate this point.  The greave there is not applied and yet is tight enough that it is closed shut without anything tied onto it yet. While the presence of loops in an archaeological find like that indicate additional strapping of 'some' sort were used, well-made greaves that fit the leg snugly generally don't require such.  This was the style in the Greek world, while elsewhere sometimes straps of different sorts were used. If it's a rather open greave that of course doesn't really 'wrap around' the shin area, certainly it would require some kind of strap system. Unless you glue it to your shin.

I don't blame most folk for not knowing this, as generally speaking Rome and Romans are far more popular. The mod itself is Rome At War, after all.  But, as a matter of fact, Greek greaves from the late Archaic going forward as far as I know, were made to be held on by the spring tension of the bronze, and fit very snugly on the user. This fact is pretty well-established within the community already, to the extent that a Greek impression with the use of buckles on said greaves within the qualifying periods is generally frowned upon as a poorly fit modern substitute.  In the Greek world, greaves were very expensive. It is unlikely you would be wearing them if they weren't well-fit to start with.  https://www.gutenberg.org/files/52081/52081-h/images/089a-670.png

Some discussion on the matter:

An introduction to Manning Imperial and some of their wares:
'Manning Imperial is a premier manufacturer of historical reproductions. As an international supplier to re-enactors, collectors, museums and the movie industry, we pride ourselves on the high quality and authenticity of all our products. We prefer to use authentic methods of construction wherever possible.

Rather than carrying a large range of products in stock most items are made to order and can therefore be customised to our clients most exacting requirements.'

And a look at some of their models;

http://www.manningimperial.com/catalogue/armour/greeves/bronze-greeves/625 'Like all of our Greek greeves these are precisely fitted to the individuals leg and the natural spring of the metal holds them in place without the need for straps.'
And an image based on archaeological finds spanning Greek history. Fairly soon they covered the knee, and before and during the Classical period they became anatomical and no longer had the holes dotting the edging for additional liners, which leads us to believe either some manner of organic material was glued in for comfort and has since rotted away, or that hoplites, as seen in vases, might have worn little more than a leather/felt wrap around the ankle. https://lh3.googleusercontent.com/-4B8BRR41WKU/WLM92zv9y_I/AAAAAAAAQvQ/53g-bdTXdGs/%25255BUNSET%25255D.png

I don't want to be pushy about the overhand spear animation discussion, but I figured I'd just share this. I was looking through the Crusader Way to Expiation files, (the "CWE - Mod" one at the bottom here it's located in commonRes), and I found a pretty interesting looking animation. So I set up the mod system, and put it into Native. Here's a recording I did.


I think it looks pretty good (and it's actually easier to use when the AI gets all up in your grill and facehugs you).

Just a thought is all.

Not bad at all.  Definitely an improvement over the only other overarm animation I've seen in WB to date, which was the old TPW mod's version.  Looks really nice on horseback too.

The transitions are better but I'd have to check how well it plays out in conjunction with the underhand stab animation.

Looks all right. I think it should rest in the high position though, and the left-hand shield movement should be minimised.

When do you want to update this Mod? Would be awesome to see one at least

Hello i have some ideas about politics for republican rome you could do like a cursus honorum from quaestor,Aediles,Preator to Consul it would be great and a system of influence more complex like you can be apointed by the senate to hold a half of the city grain for ...long or you are in charge of the economy of the city and make a senate scene where meetings hold like every weeks and you can propose ideas to the senate like declare war and make peace because the current consul act as a king and romans hated kings it be like for example:Marcellus and Rufus are de current consuls of the romani and make elections every years could be nice to.

This might be above my capabilities besides I don't think I can sink in the time to develop such a feature. The source code is and will be available again for whoever wants to change the mod to fit their taste so that might be your best chance.

As far as I could search it(and my coding skills are nowhere near as good as SnD's) it's not possible to make a Republic in M&B. You can have a trigger that awards you a custom title(like Consul, Praetor etc.) when the player 'ticks' off some counter, like renown, but that's it and it has pretty much no meaning on game-play, apart from self-indulgence. And as for any elections, the only thing close is the Marshall election; I rally don't believe that you could trick the game into electing the lord of a faction.

If I remember correctly Sayazn has a republic system for one of its faction where it picks its rulers like it a faction would pick its marshal but I don't think it made much of an impact. I ought to play it again just to be sure.

But for the senate scene a lot of mods already done it.

I was thinking about make recruitment more decent put like a fonction recruit recruiters in cities of your faction even if you are not the lord of that city the mod Renaissance already done it;it would be cool and historicaly accurate.

In the new 2.6 beta, there is a skybox issue where it turns black when i look in certain (most) directions. Really off-putting not sure if it's just me with this.

I personally haven't experienced anything like that and I spent dozens of hours playing with those skyboxes. Skybox related bugs often stem from corrupted downloads, graphical settings or running out of memory (sky swapping textures/materials for instance). Try playing around with graphical settings, make a clean install of the mod if it didn't work or try out the low-res texture pack: Low Resolution Texture Pack for RaW 2.6 Beta. You could also try to make the executable large address aware with this tool but remember to make a backup first!

My suggestions for single player after some hours and total over 1600 hours in warband:

• realistic scenes - kinda annoying to have 60° degree scenes, even if it's possible the chances in some area's for example Epiros is to high. Wheter take them out at all, which I would prefer, or minimize them to an absolute minimum.

• faster caravanes - well every caravan in the game is quite fast, except ours. Kinda annyoing to quest this way and takes away much flow in gameplay.

• battlesize - I get that the HQ textures are demanding but 150 is really low. I would prefer about atleast 400-570. I know you can use battlesize tool but it would be handy to have it ingame.

• ransom quest - I know this is hard to do but it would be awesome if you could limit the radius of the possible villages. I have seen something similiar somewhere else and it would be great if you doesn't have to run from Makedone to northern Italy for a bandit group.

I hope atleast the first 3 things could be worked on, because it ruins somewhat the playing expirience when you come from other mods who do a really great job at it.
It would be a shame, because the setting is really great and I love the work that went into unit creation and the details of the world.

Keep it up guys.

Do not know if it has been discussed yet but during an overhand stab with the (heavy)pilum the model seems to disapear. 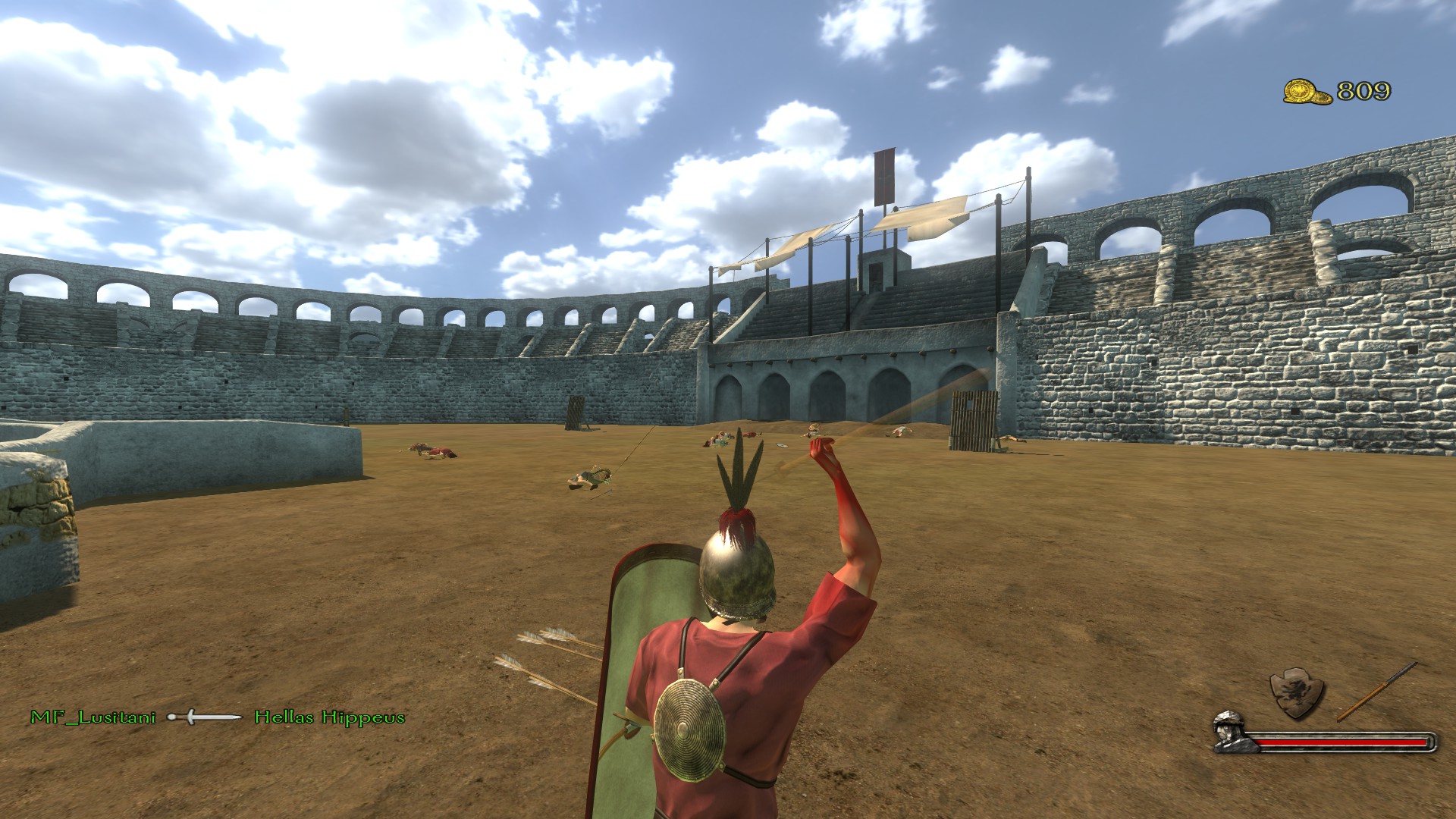 Former is due to how the game blurs the models when swinging, adding a flag to remove the blur fixes it. Later is an engine issue (as far as I know) that missiles stuck to shields and sometimes to the ground will default to the missiles material instead of the custom material it was using, only permanent fix would be to remap all the arrows, javelins, etc... to that material.

All good I also had a suggestion relating to the javs: