Battle of Lake Regillus, 496 BC

Out of curiosity, would it be alright for the in-game Triarii to hold their Hoplite-Maniple equipment such as the Hoplon, Etrusco-Corinthian helmet and Musculata (as well as any other possible Hoplite equipment they could've used)? My main desire for this is due to their presence in the historically authentic mods Europa Barbarorum and Europa Barbarorum II, both of which start after the Third Samnite War. This could of course be seen as a means of supplementing their current available equipment. Sorry if this seems like a nonsensical request.

Muscle cuirass are most likely still in use by heavy infantry but I don't seem to find enough evidence to support the Triarii using the aspis since the scutum has been introduced for a good while and it's more cost-effective.

I read this paper a few months ago and it addresses a bit the equipment present in our timeframe:
http://folia.archeologia.uni.lodz.pl/folia_archaeologica_29/folia29_tomczak.pdf Well, I'm not sure if this is going to help, but I decided to put in what I could.

During the Samnium Wars, the First Tactic that the Romans relied on, the "Phalanx," had been failing them due to Central Italy's mountainous terrain. Thus, the Romans had abandoned the Phalanx, and formed a new tactic that would turn the tide of battle. This was called the "Triplex Acies." A checker-board formation of 3 rows, the first row was called the "Hastati," the second one, "Principes," and the third and final one, the "Triarii."

Also, aside from the Scutum and Gladius, it would be a good idea to randomize the armor of these three groups, since during this time, soldiers provided their own equipment. These men were the youngest and the poorest, and were tasked with screening the three rows during deployment and skirmish with the enemy skirmishers to secure early victories and boost morale. (Would be a good idea to add a "Send your Skirmishers to Screen" option during the Pre-Battle Interface to represent this.)

Their equipment would be composed of a Sword, (Presumably not the gladius, but this is just a hunch.) a small shield, javelins and a helmet. Sometimes they'd be capped with wolf skin for identification. (Perhaps randomize the helmets between helmets and wolf caps?)

When the Velites were done with screening and skirmishing, though, I'm not sure about this but there are some evidence pointing to them cooperating with the Cavalry, so presumably after skirmishing they would go to either Flank to support the Cavalry. But in the Battle of Cannae, they were hanging out behind the Triarii instead of helping out the Equites, for some reason.
Hastati These men were the First Row of the Roman Line, these were the youngest of Rome's Heavy Infantry, but they were the most eager ones to get into battle.

Their equipment varied from soldier to soldier as they provided their own equipment, but usually, the Hastati would have a Gladius, Scutum, and Two Pila for weapons.

As for the armor, it varies, though the helmets were usually either Montefortinos or Corinthian Helmets with a cheap neck guard. Most infantry also wore a single greave on the left leg, usually facing the enemy, but wealthier soldiers added an extra greave to the right leg.

I'm not gonna tell you about how the legionnaires held their Scutum at the time, judging from the models, you already knew lol

Though, considering how the Hastati and Principes did a single pilum volley before charging, it would be cool if you could replicate that in the game, I was able to do so through a confusing alternating of Volley Fire and "Hold this Position and attack this Division," it'd be nice if you could code in the AI to do that.
Principes 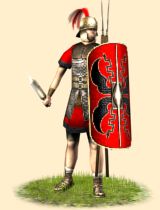 Forming the Second Line of the Legion, these were the wealthier and slightly more veteran soldiers of the Legion. They were equipped with the same equipment of the Hastati. But typically, they had better armor. Usually with a Gallic-Style Cuirass and maybe double greaves? These men would also do a pilum volley before charging. 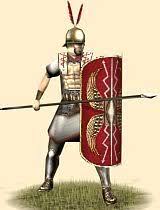 "Be careful of an old man in profession in a place where men usually die young."

These composed the third, final and most formidable line of the Roman Infantry, they were equipped with the Hasta Thrusting Spear and the usual Scutum. (Sorry but I couldn't find any specific accounts on their armor.)

In dire circumstances, the Hastati and Principes would fall back behind the Triarii to reform, and the Triarii would form phalanx for a desperate stand.
Well that's all I got for now, sorry if some of these were already known or mentioned. (In fact, I have a very bad hunch that this is the case.) But I hope I made it an interesting read, anyway.

Good day and best of luck to your mod and future endeavors. if only it was possible for each unit of infantry (5 or more)
to have a standard bearer assigned automatically each time,
and specific to that legion... Yep, that'd be pretty awesome. Also, I decided to type down some info about the Auxiliary part of the Roman Legion. Apparently, during this time, the cavalry afforded their own horses, and the class that could do so was the "Equestrian" Class of Roman Society, which was relatively small. (Perhaps making Roman Cavalry rare can replicate this concept?) As a result, Auxiliaries were formed. (Auxilia means "Help" in Latin, fun fact.) These were armies which were just as big, or a bit larger, than the Roman Legion itself (4-5000 men.) These armies were referred to as "Alae" (Literally means "Wings" as they were always posted on the Flanks..Or..More appropriately, the "Wings" of the Roman Legion.)

I couldn't find any specific units for these, unfortunately.

The Socii (Italian latin for "English") were autonomous tribes and city states in the Italian Peninsula, and were allies for Rome, well, until the Social War. (Maybe you can add Socii Factions? I'll add more onto these when I find time.)

From 338BC to 88BC, 75% of a Normal Consular Army's Cavalry were made up of Socii (Socii Equites!! The timeframe also fits since the Samnite Wars ranged from 343BC to 290BC.)

Though during Pyrrhus' Invasion and Hannibal's, many of the Socii had rebelled against the alliance.

Also, there was an Auxiliary Force named "Socii Extraordinarii" which were Infantry, and they were under the direct disposal of the General himself.

That's all for now. Hopefully, it was more useful than my last one.

We do have the presence of the Allies/Socii in the Roman faction, all the cities/villages around Capua make use of Campanian units instead of Roman units to represent that these were under control of Rome but still had their own distinct culture and provided different troops. It's also present in other factions in the form of unique units specific to a certain Polis (Athenian Hoplites, Corinthian Hoplites, etc...) or regional units (Thessalonian Hoplites and Cavalry).
I keep making some new units and updating the system inbetween releases depending on the resources I have to make the units distinct enough.

Would it be possible to make the pilum a projectile weapon only, so it cannot be used in melee (by pressing x). Would this not make sense if it is made of a softer metal which when thrown becomes mangled and damaged on impact?
I also ask this because I sometimes see Roman hastatii and principes using their pilum in melee if they didnt throw it which kinda bugs me.

This "theory" based on few accounts by later era historians could perhaps apply to the imperial era pilum which in its own has probably more accounts of being used as a spear compared to bending/breaking on impact and modern reconstructions show them as being more resilient than anticipated, I'd say this has somehow become a common misconception. The earlier versions of the pilum as seen in the mod are more akin to a short spear or large javelin so perfectly suited for use as a spear as the situation demand, what makes it more likely is that it did in fact progressively replace the spear. I don't know if this has been talked about before in this thread (sorry for being too lazy™ to check), but is there any particular reason why the Hastati and Principes forgo their use of the hasta and use just the gladii as their primary close combat weapon in this mod? I'm fully aware that they both abandon it in favor of the gladii but most sources seem to place this "evolution" around the time of the Punic Wars. I was also re-reading some of the books at my disposal to find more information and I found this tidbit from Fighting Techniques of The Ancient World.


Fighting Techniques of The Ancient World (pg 43) said:
Nor does he [Livy] say much about weaponry; the title hastasti suggest that these troops, at least, might have used the hasta, a single-handed thrusting spear, up to a certain date, but Livy's and Plutarch's (heavily anachronistic) accounts imply that swords were being used extensively by the late fourth century BC, while Livy refers to the Gauls in a battle in 351 BC being 'weighted down by the missiles which...stuck in their shields and made them very heavy to carry', suggesting that the heavy throwing spear, the pilum, might have been in use by this date.
Click to expand...

I would imagine this is one of the sources that you've used to make this decision. From this, it could be deduced that the title of Hastati was an honorific at the time frame of the mod and the gladii is the dominant weapon, maybe as a sidearm to the hasta, but are there any other research material you've used regarding this? I personally thought that since the Samnites were a strong influence on the Early Roman military, and is often depicted as wielding spears, that the Romans would've fought with weapons somewhat similar to their Oscan counterpart for quite sometime (up until the Punic Wars). This is just my belief though.

It's complicated and still heavily debated nowadays, I like to believe there's been an evolution and a series of changes after Rome got Vae Victis-ed in 390 B.C., experimenting new tactics and see what fits. The good thing about the pilum is that it's polyvalent, it can be used to thrust as a spear or be thrown as a javelin which makes it a good situational weapon and the Oscans too seem to heavily rely on it. I've read perhaps half a dozen books or more and most of them have a blurry shift between Servian and Polybian reforms and not all agree on the armament, the fact that some ancient authors use some terms interchangeably adds to the confusion.

Anyway I'm trying to keep an open mind on this matter and keep on the lookout for new articles or information that I can possibly acquire, I've stumbled on this research paper and another one with plenty of information about various Oscan tribes/peoples which could prove really useful but I'm waiting to get Rg's full attention on it so we can expand and overhaul them properly. Here I leave a page in Spanish that shows the origin of Rome and its army.