EFREM said:
A little bit of serious discussion about history won't be bad in the thread, e.g. Are we sure Ligurians were a celtic nation or they were only an Italic tribe? Romans considered Liguria being the part of Italy from Massa to the Alps of Valle d'Aosta and extending in width till Nice, During the Emperor Augustus however the regio Liguria was resized under the Po river: Will RaW have this kind of distribution betwen Ligures, Insubri in the centre of the Po Valley and Venetians-Illyrians in the East?
It's incredible that till Caesar the Romans had a so vague idea about the Celtic world...
Click to expand...

Seek n Destroy said:
You might just start paying attention to your neighbours when they come knocking on your door asking for their weight in gold

Concerning the Ligurians, their language and culture seems closer to the Celts than to any Italian tribe but at the same time different enough for them to not get along very well. I don't remember the Ligurians to be included in any Celtic field trip (Sack of Rome, Battle of Sentinum and the later battle of Telamon, etc...) but I've read mentions of them losing their territory in the north to Celtic tribes leading me to believe they didn't get along so well (a bit obvious heh). They didn't seem to be keen on fighting large scale warfare, they've been involved in skirmishes against Greek colonies such as Massalia (if I recall correctly), Etruscans and neighbouring tribes as mentioned earlier but not ambitious migrations or invasions, apart from that they served as mercenaries for Carthage and Syracuse which I guess dragged them into war against Rome and even with the Romans knocking on the door they tried to avoid taking on their legions toe to toe and eventually got themselves surrounded (the tactics from Russia didn't work there). Last mentions I have of them is that they ambushed a small legion ~200 B.C. inflicting substantial casualties but that just angered the Romans that proceeded to conquer what was left of them. After that it's pretty much the same fate of the other conquered peoples, they kept their identity for a bit serving as auxiliaries and still having a portion of the Empire named after them then they fade away from history.
All in all they are relevant but I'm not sure how we can pay them justice, we'll see. I'm personally more worried about the rest of the full Celtic tribes, trying to not make more of the same if you get what I'm saying.

There was somewhere a quote about Ligurians saying that they were harder to find than to defeat, from a certain point of view it's still true
Click to expand...

EFREM said:
I'd rather pay in steel my ransom

Against the opinion of supposed Ligurian weakness I quote Livy XL 38:

This is an interesting passage in Livy, because it corroborates the theory of the strenghtness of Ligures Apuani and offers a forced migration model. "Adventum in Provinciam" means area of jurisdiction of the magistrate, at the time however it means only the mandate, because Liguria wasn't a Provincia yet. it's strange that this particular time both consules were in charge of the same area of jurisdiction. As everyone knows one consul went to war, the other one stayed at Rome to ensure the conduct of civil activities. This campaign was very difficult and required so much military attentions? Or did Baebius and Cornelius act together, sharing the same politics, or did they wanted to establish a new Clientelar pool in the new area? Maybe both proposals were right, or maybe there is something more to be analized.
Behind the military hornatus rhetoric of Livy, the data of the money distribution highlights the forced migration as exceptional, not as much different from a forigiveable loan. What is the gain in giving so much money for 12 000 dediticii? the colonial method was the same used for Latin people with the typical process directed by agrimensores, the quinquemviri. an unsual respect the one the Apuani had, maybe because it was not a military victory but a diplomatic success obtained in a very peaceful way. Futhermore a clear sign is the Aerarius paid for the naval transport, why the Romans wanted to make peace with the Apuani, and why move them in the Samnium?

-first answer is because Rome wanted to control the Ligurian cost, and the only way was to pacificate the hinterland. In fact Ligures used to concentrate themselves in pockets of resistance (the well known tactics of guerrilla we said a lo of times); unforeseen attacks and then strategic retreats in castella. It's clear that after consul Marcus defeat at Saltus Marcius the Romans felt this problem as urgent. there were also the problem to secure the communication routes.That's why the wanted to move them from the mountains, making the Apuani the inhabitans of the coast, a sort of method to civilize them. it's not excluded the first phase of the migration regarded the transfer into the coast (Liguria is nowhere plain). Apuani however were forced to move another time, maybe to prevent their comeback to the mountains and that's why they offered hostages to be allowed to remain on the seaside. The consules decided for the Samnium.

- the area of the Samnium Cornelius and Baebius wanted to establish the Apuani was Irpinia, near Beneventum, on the ruins of Taurasia (see the eulogy of Scipio Barbatus), the countryside was exceptionally fertile and healthy, a paradise compared to the Garfagnana. In this area there was a lot of ager publicus, gained from the Samnitic wars, and the neighbours were not as much to be affected by the new population implant. In addition to that Apuani will be Romanized as fast as ever. they never tried to riot (diplomatic success- see what happened to Paeones in the Persian wars?), and more, after one year consul Fulvius transferred 7 000 other Ligures in the same Taurasia territory and they were welcomed by their fellow countrymen Livy XL 41, 3-4.
Tabula Alimentaria survived with the inscriptions of two places, remembered also by Pliny, the names of Ligures Baebiani and Ligures Corneliani in Samnium.

the Succes was celebrated by a victimless triumph (Livy contradicts himself!), the Romans this time won not using the force, but they were forced to come to terms with the Ligurian problem.
Click to expand...

Got some stuff from a simple search:

Apparently a Ligurian, keep in mind that this is from a simple search Europa Barbarorum said:
Historically, the Ligurians origins were unknown. They are somewhat of a mystery people, like the Basque. Despite their disasterous driving out from the Po Basin, they managed to reestablish themselves. Armed with Celtic weaponry, they held off further Celtic incursion, and possibly worked with Celts from time to time, and certainly did later on, such as the joint sacking of Placentia in 200 BC. Their population was somewhat small, but notable. They came largely to an end in 181 BC, when consul Lucius Emilius Paulus massacred 15,000 of them, and deported 40,000 of the Apuan-Ligurian tribe to Campania. The remaining Ligurians migrated into Celtic territories, and worked for decades as Liguriae; retainers of the Ligurian culture, under Celtic kings. As such, some 'Celtic' statues in modern France depict robed Ligurian warriors, sometimes wearing Celtic chain, but wearing the very distinctly non-Celtic Ligurian peasant-warrior robes under it.
Click to expand...

Lucius Emilius Paulus did carry out a campaign against the Ligurians and it doesn't seem far fetched from him to conduct a massacre knowing that he sacked dozens of Epeirote cities and villages after his Macedonian campaign all which is also written on  François Catrou and Pierre Julien Rouillè book about the history of Rome. According to the book he ravaged and burned Ligurian villages forcing the people to flee to the mountains and proceeded to build roads to facilitate the movement of armies. He tried to force them to battle in the plains but finally succeeded to make them abandon their weapons and deport them to avoid rebellions but I highly doubt blood wasn't shed before that, especially knowing he looted towns and villages.

but the great roman general did the massacre against the Ligures Ingauni in 181 BC just because they were allied to the Barca family during the punic war. the city of Albenga was the naval stronghold of the Carthaginians and this urged the Roman violent attack. But he failed to come to terms (or to destroy) the power of the Apuani, since they were indomitable mountaineers and all the consequences derived from this condition.

an interesting article more detailed about this question is Coercizione e mobilità umana nel mondo antico a cura di Marta Sordi which you can find in an extract here https://books.google.it/books?id=HuWaYrlZje4C&pg=PA178&lpg=PA178&dq=lucio+emilio+paolo+liguri&source=bl&ots=bvb1hOQrYh&sig=9DEJuk9fxDR91f9JvUsU2dyT_rY&hl=it&sa=X&ei=v1MTVZL8NIvkaoHJgogG&ved=0CD8Q6AEwBQ#v=onepage&q=lucio%20emilio%20paolo%20liguri&f=false and for a fortunate case, the material regarding the Apuani and Taurasia colonization is entirely readable
the yield of the Apuani is completely discussed and compared with that of  the Ingauni showing that Aemilius Paulus failed against them but the diplomacy won making them foederati.

pp 192 show some examples of the Ligurian strenght and boldness handed down Roman literature, they are also very interesting to understand the role of mercenaries during the III and II century.

Of course, I've just regarded them as a whole while of course it's a conglomeration of tribes binded together by language and culture but behave rather independently so when one tribe does something the others do not necessarily follow. While it's interesting to know their role past our timeframe it would be better to cast light directly where we want it to shine. We know they sold themselves as mercenaries and were prone to skirmishes with their neighbours and in terms of appearance it's mostly their clothing that seems to cast them apart from the celts, Europa Barbarorum mentions statues representing the Ligurians with some kind of "national" clothing akin to a robe, it would be nice to find such thing.

"The Insubres or Insubri were a Gaulish population settled in Insubria, in what is now Lombardy. They were the founders of Mediolanum (Milan). Though ethnically Celtic at the time of Roman conquest (at the beginning of the 2nd century BC), they were most likely the result of the fusion of pre-existing Ligurian, Celtic, Etruscan, and "Italic" population"  http://en.wikipedia.org/wiki/Insubres

Some images from EFREM's one post that was in response to Seek revealing the preview for Genua:

Both are for Ligurian houses. LionStrong made the helmet 5 and 6 but damn if helmet 4 isn't completely overkill  Was he compensating for something? 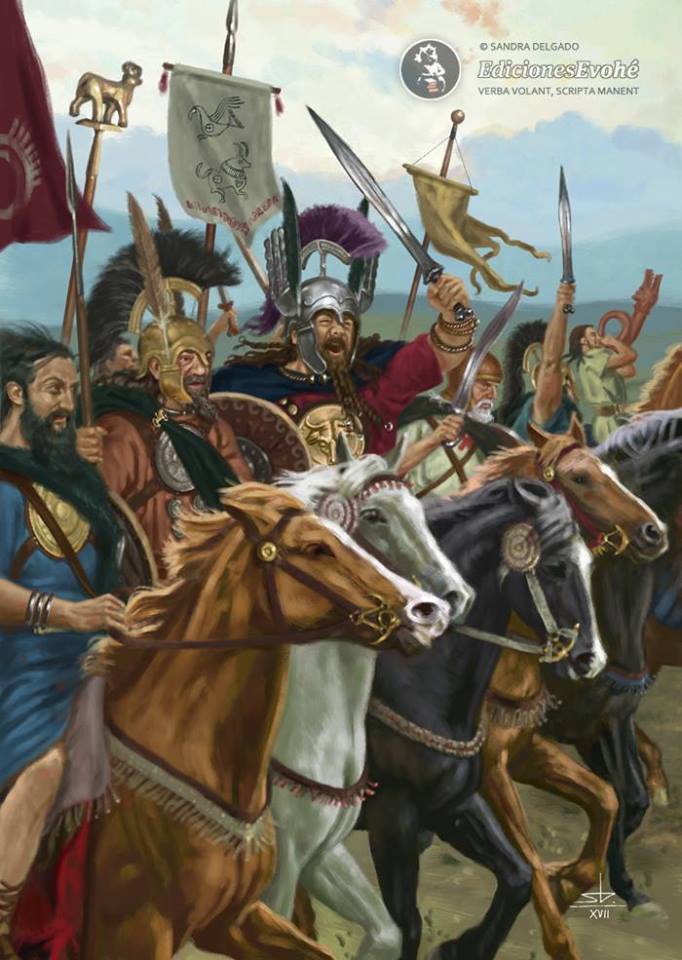 The most famous depiction of a ligurian warrior is this one:

These are instead reenactors:

Anyway, their equipment was most likely the same of the celts, but cheaper. Notable also the use of a sica-like sword/knife, a curved thing and the use of skirts instead of the celtic bracae. 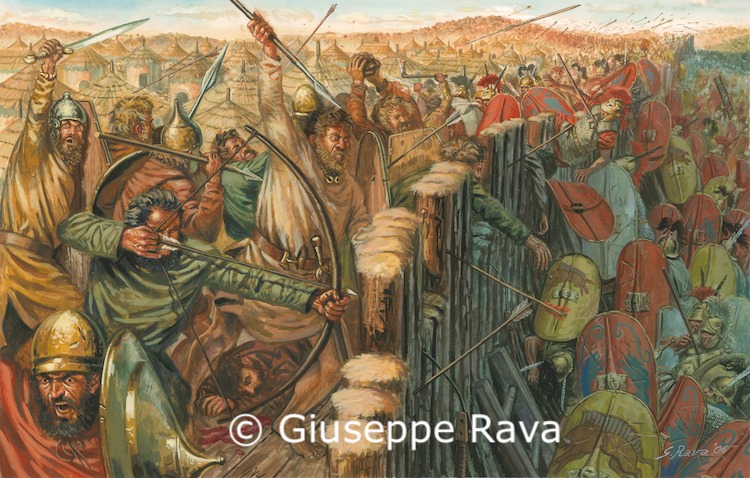 your right, they are Iberians, my mistake
I accidentally posted it twice on two threads
thank you for noticing